An early start yesterday at Weybridge, we awoke at 5:30 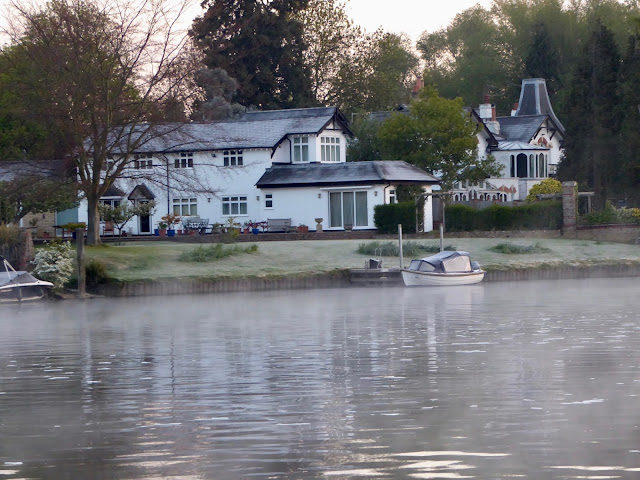 ... to a mist covered River Thames, a temperature of just below freezing and frost on the roofs of the buildings opposite 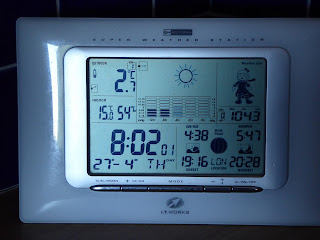 By the time we'd upped, dressed, breakfasted and ready to cast-off it was a balmy (not) 2.7° 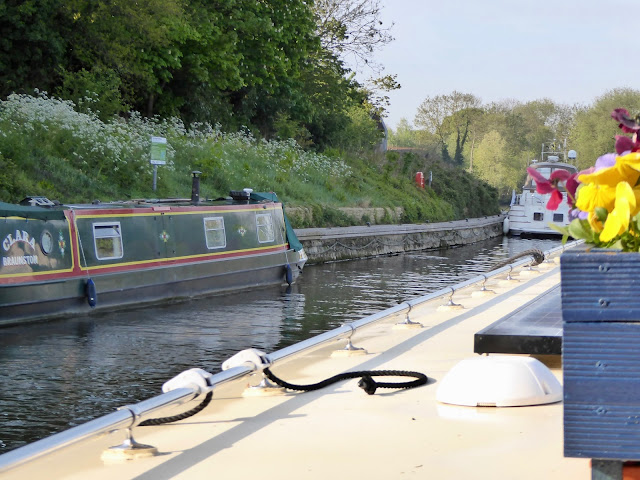 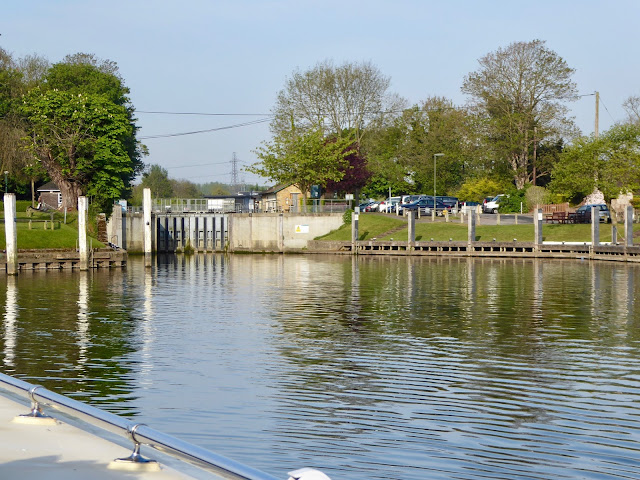 ... and swung the bow round to face the lock where he dropped me off on the landing as of course the lockies don't arrive until 9 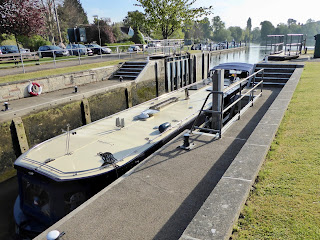 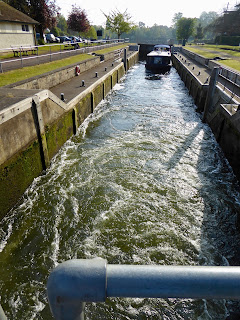 Safely into Shepperton Lock and rising

Looking from the lock towards the weir ... 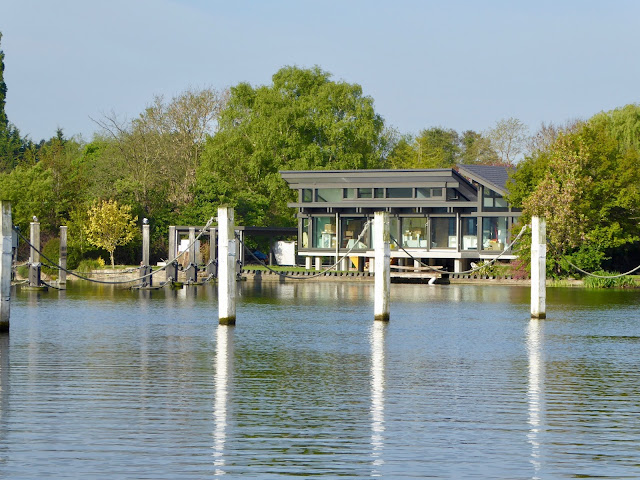 Although we'd seen building going on behind the Huf-house (when looked at from Thames Court) we'd not seen it without the scaffolding.  It sits right on the edge of the weir and must have great views but not sure if I could live with the noise of that rushing water 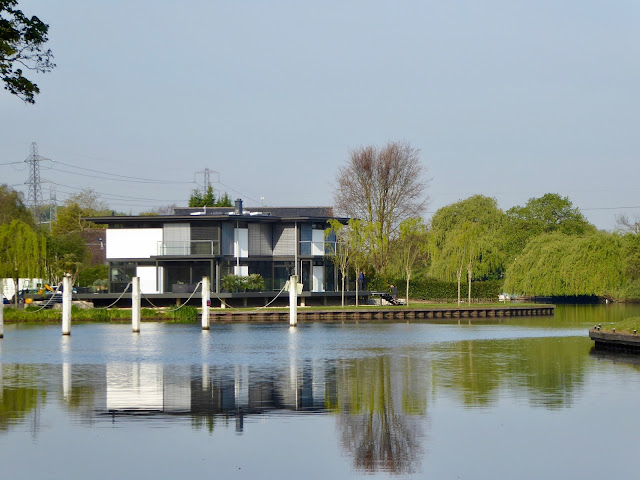 ... and the garden of the Huf-haus looks almost finished 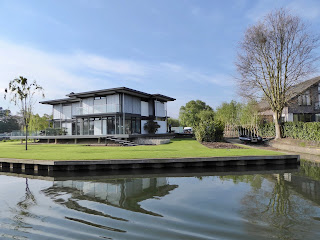 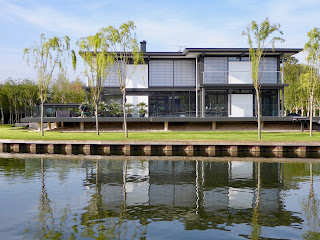 Having large pot plants in front of the huge glass windows and mature trees on the edge of the river will certainly help with the goldfish effect from the ... 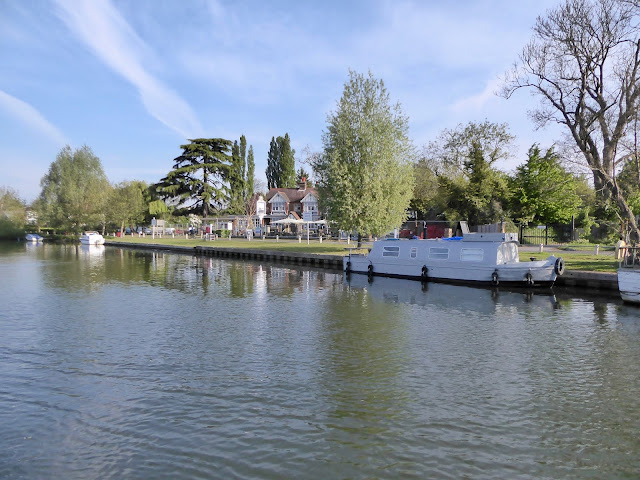 ... usually very busy pub garden opposite which is currently closed for internal renovations, plenty of moorings though if they were needed! 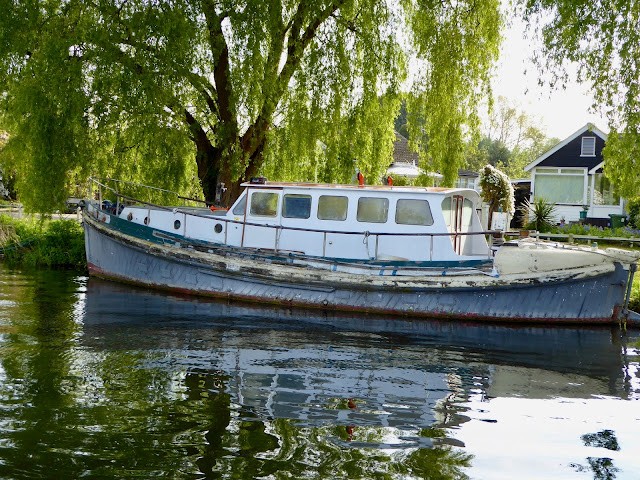 We've not seen the 1940's Dunkirk boat before without it's cover on, it still seems to need rather a lot of work on the hull though. 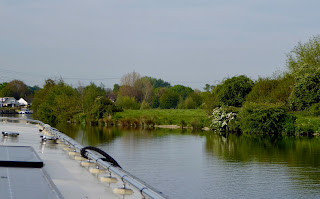 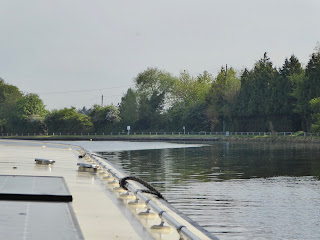 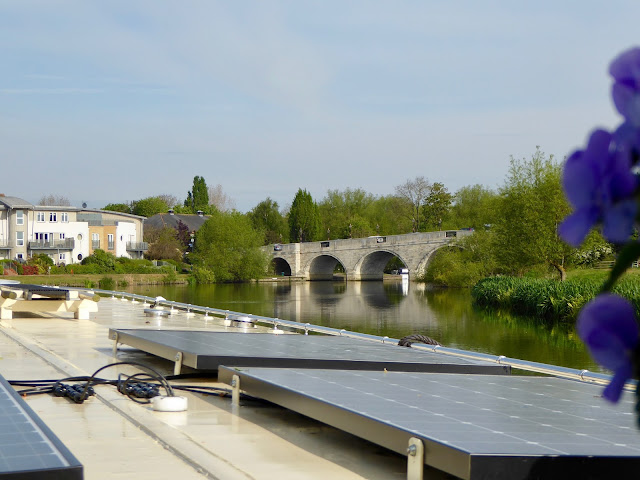 ... and approaching Chertsey Bridge beyond which is the next lock. Here a small cruiser pulled up on the lock landing and climbed up to the lock side and started to open the sluices and gates.  George pulled over onto the landing opposite and I got off with the intention of suggesting that I take over the lock because we'd be last out of the lock but before I could speak he suggested that we went in first and I checked that he was ok for me to reboard SR.  No problem, we went in, he followed, got back on the lockside to the control panel and up we went... 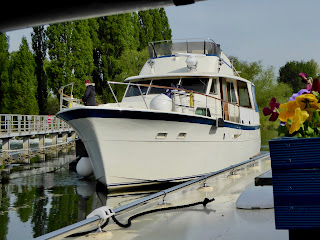 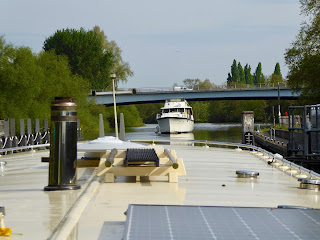 ... when the top gates were open this huge cruiser was wanting to come in, great I thought, that will save the cruiser owner having to close the gates after bringing his boat out... 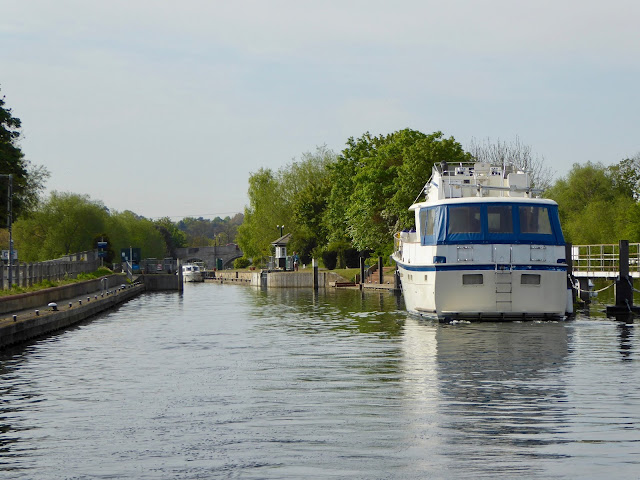 ... but no, he stayed there and the last we saw the big boat was going in - now what was that all about? 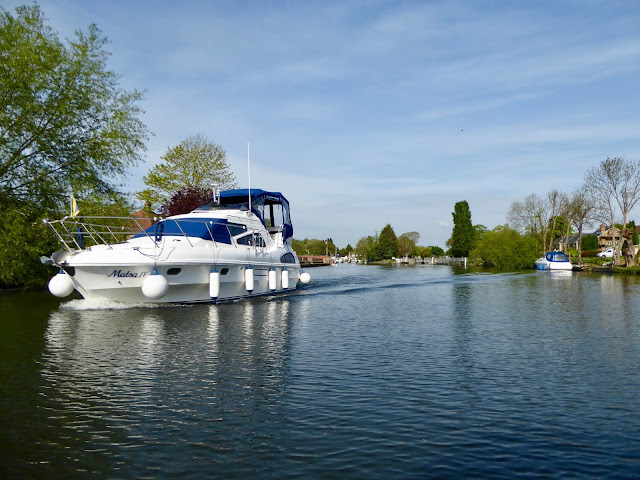 Another mile and a half and we're approaching lock three of the day - Penton Hook.  There had been quite a bit of boat movement. 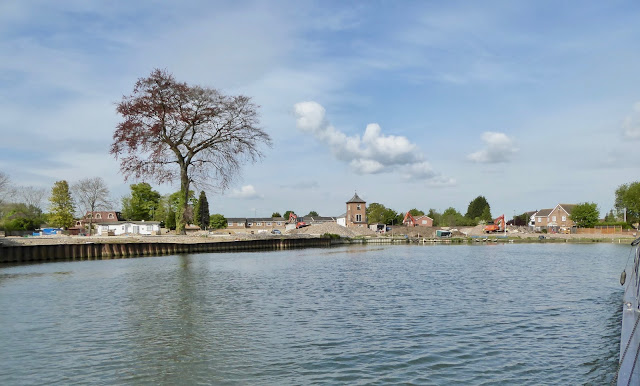 Another huge building site as we approach Staines - I wonder what will go up now. 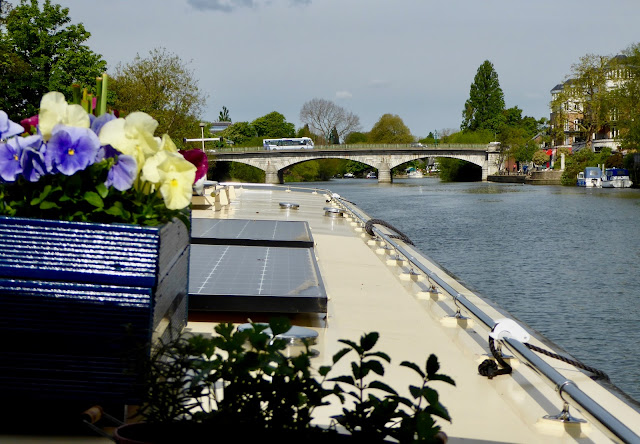 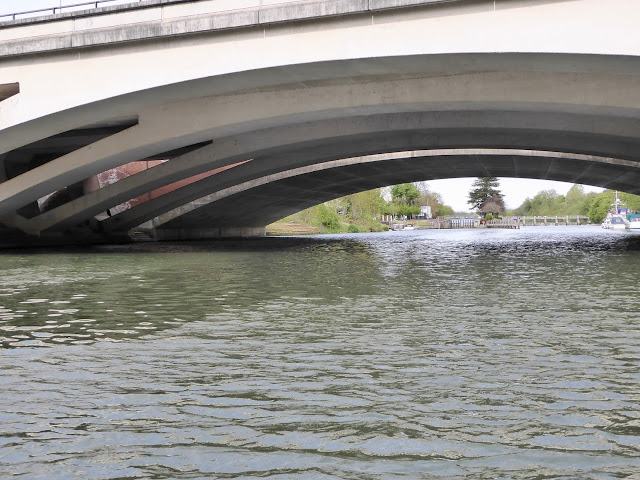 ... under the railway bridge into Bell Weir Lock - is Mr Grumpy on duty?  I was ready to step off the boat if he was because knowing him I was anxious that we were properly roped up before he opens the sluices but the chap I could see opening the gates was not him so I stayed onboard and all was well.  As we reached the top of the lock we noticed that he was indeed on duty but fortunately for us he was in his office and letting the volunteer do the work for him!  You may have noticed that we do not like this man. 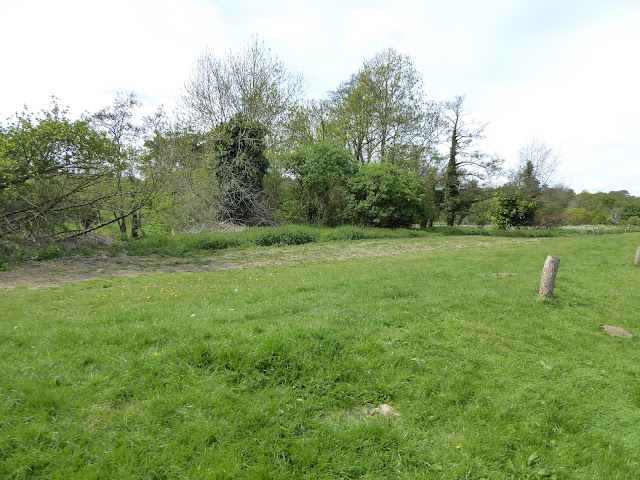 By 11:30 we were in pole position at one of our favourite moorings - Runneymede where we've paid for a season ticket (12 months).

Although the sun had been shining all morning the air was very cold especially when we were cruising into what little wind there was so we were glad to moor up and get warm again. 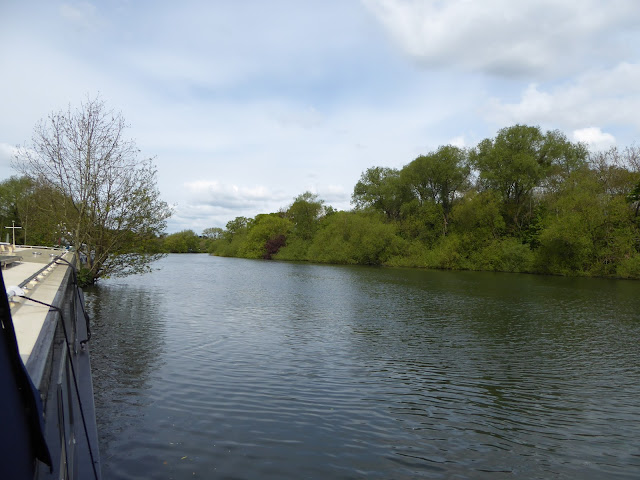 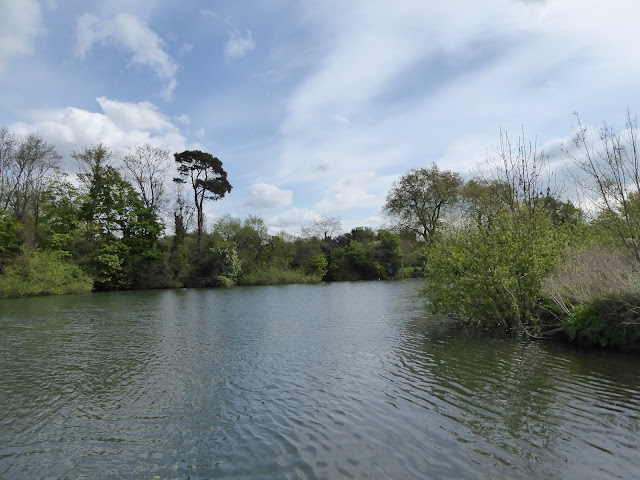 Once the covers were all closed on the back deck and with lovely views all around us we sat and drank our ritual hot chocolate orange to warm us up and we relaxed again. 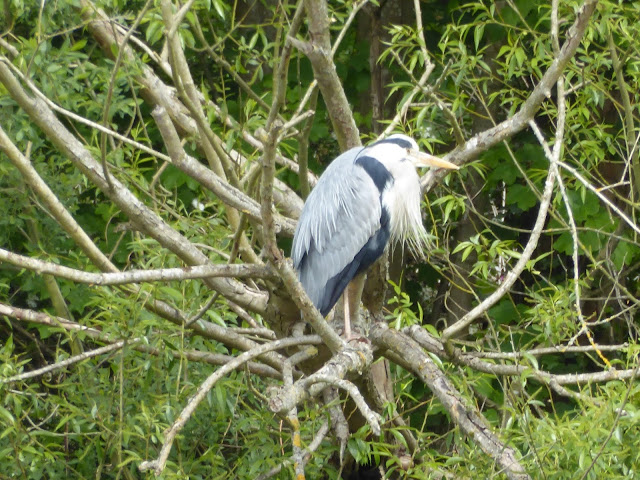 Seen in the trees opposite, he sat there for hours!
(photo by George).

Inside the fire had been lit and when the sun disappeared and the rain came down we retired inside and kipped for an hour or so ...  just lovely!
Posted by Carol at 12:17