Another hot sunny day (I hope it doesn't revert to winter again next week!) 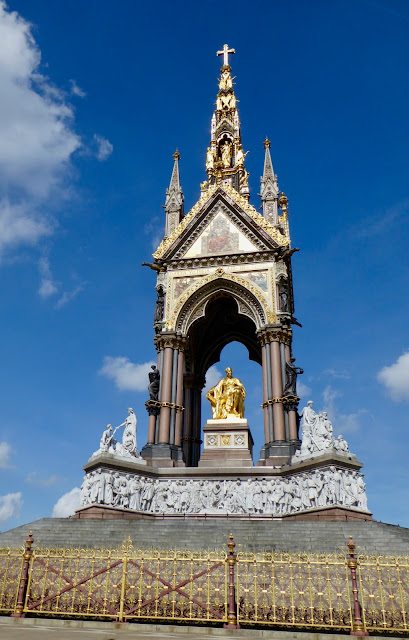 Through the park once again to the Prince Albert Memorial 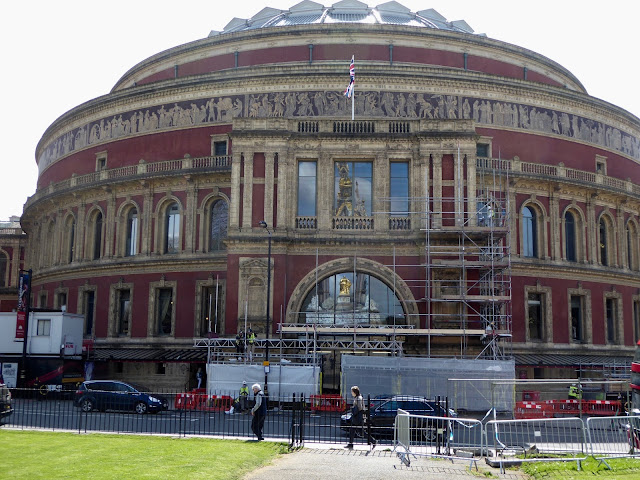 ... and over the road to the Royal Albert Hall currently undergoing renovation as are most of London's buildings! 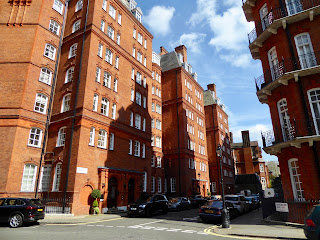 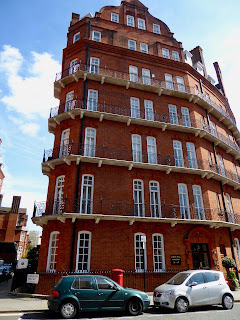 We had to walk round to the back to get into the hall through Kensington Gore (gore means narrow piece of land) and is named after the estate on which occupied the site until the mid-19th century. 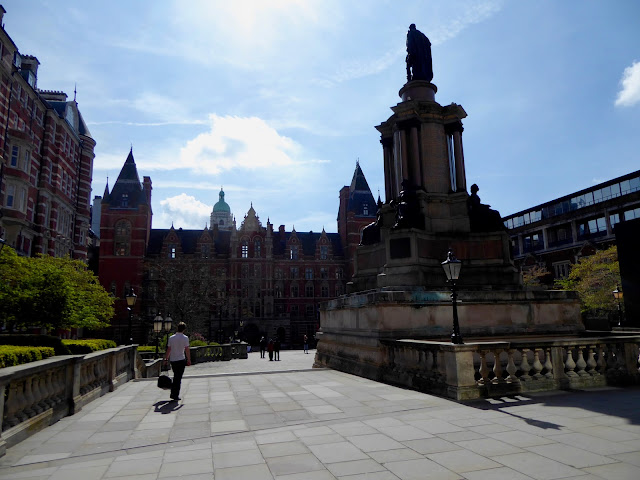 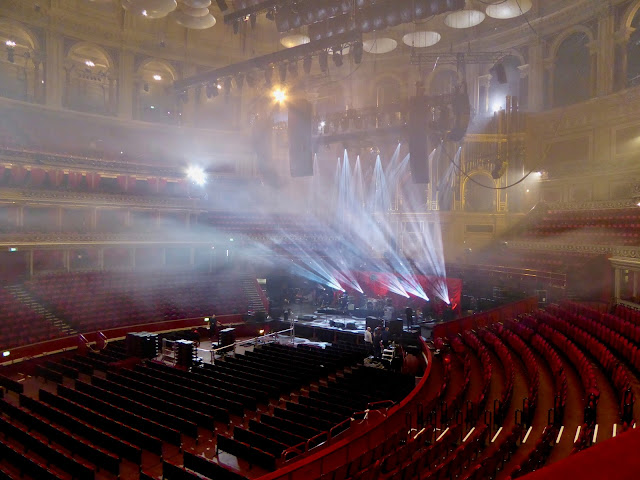 Once inside we booked ourselves onto the next tour 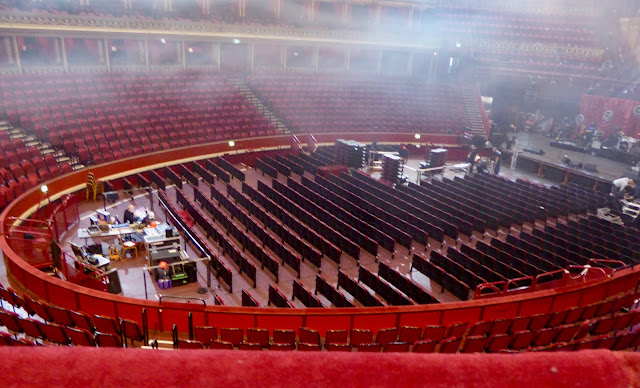 ... and taken up to I think the second landing to look down on this massive theatre 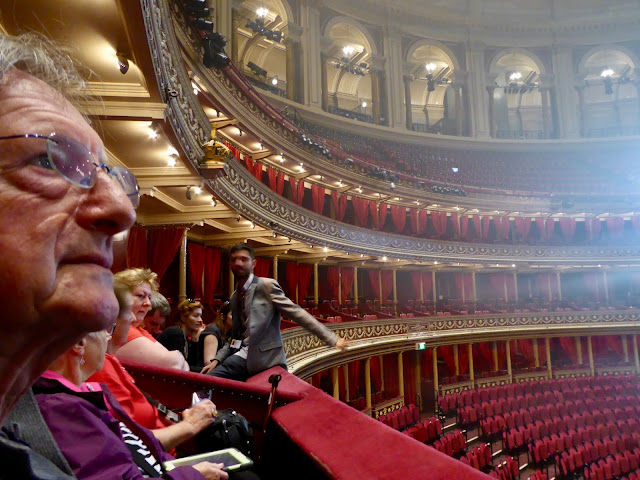 That's Pascal our Irish tour guide sitting on the balcony edge waving his arms about and leaning back - it took me a lot of concentration to listen to him as I just wanted to tell him to keep away from the edge or he'll fall (I don't do heights very well)!

If you look carefully you will see the crown above the next box - that's the Royal Box.  If royalty is attending the chairs are changed for more comfortable ones and the everyday curtains are swapped for silk ones. 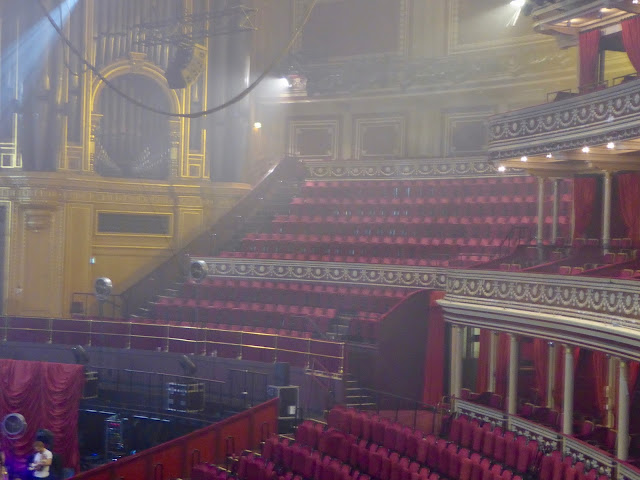 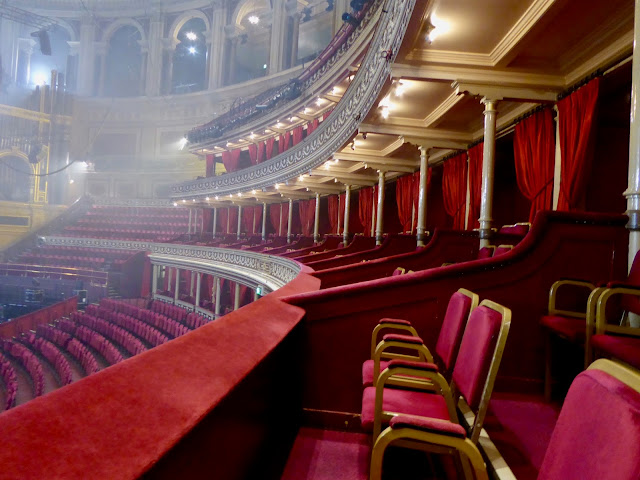 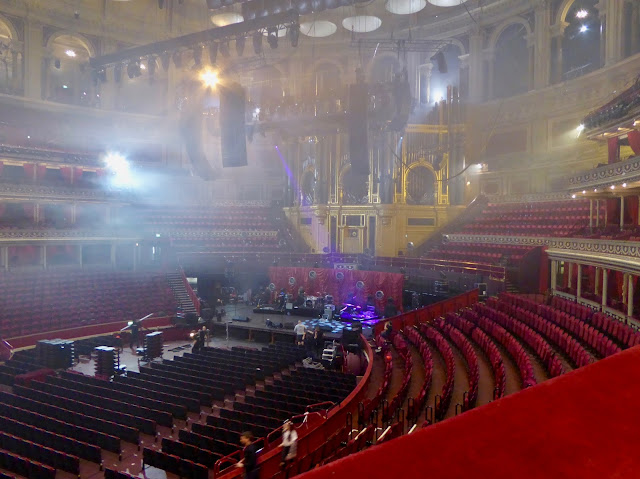 The hall was being set up for the evening's concert 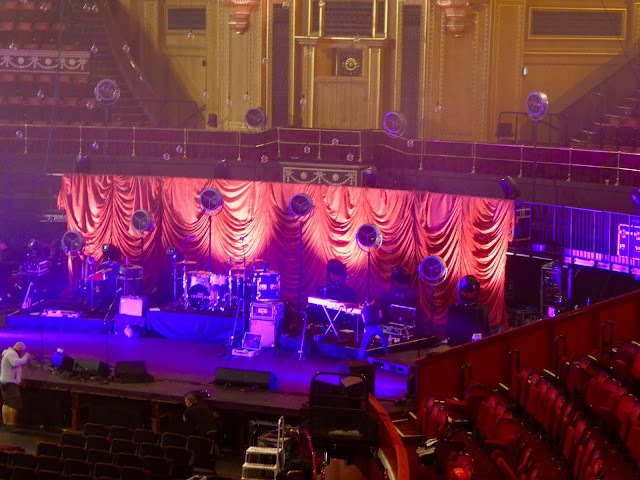 of the Scottish singer Amy McDonald 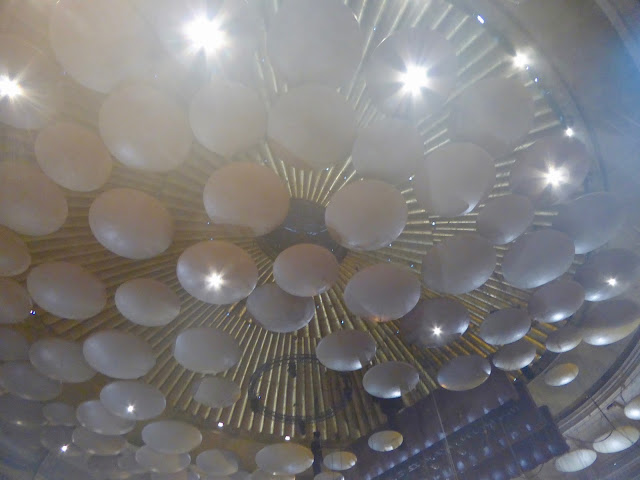 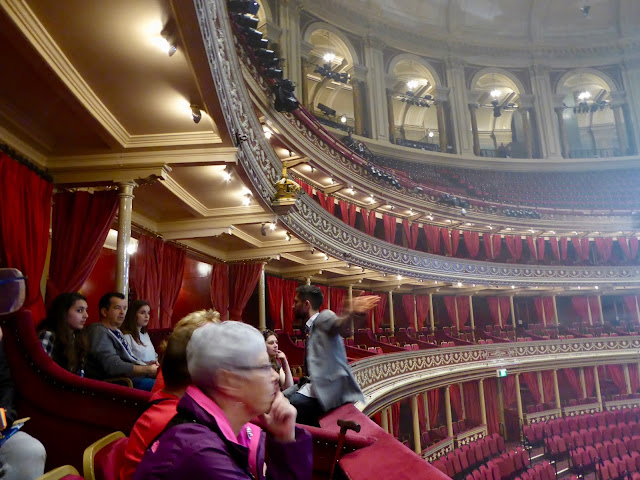 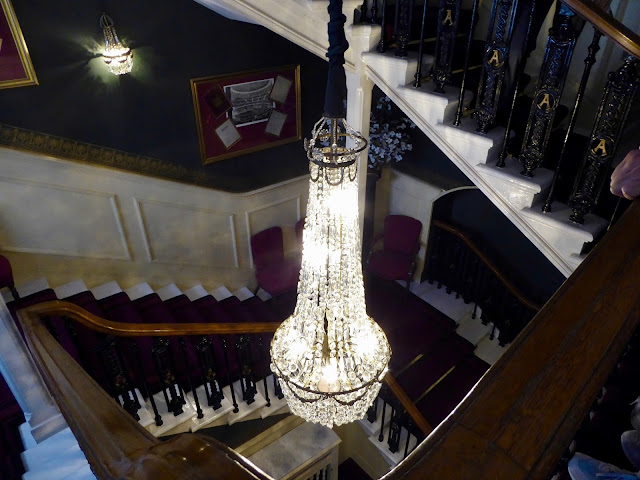 The Queen's staircase leading to ... 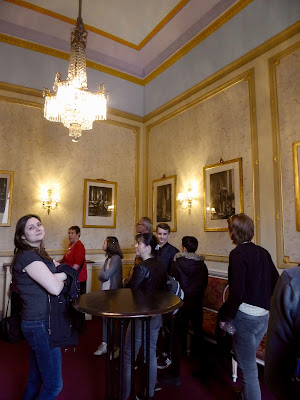 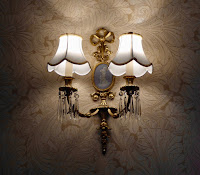 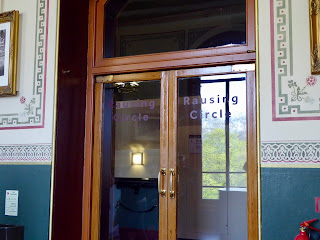 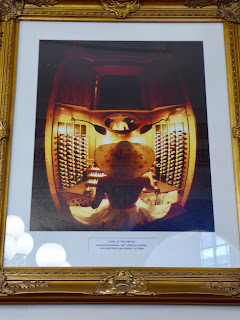 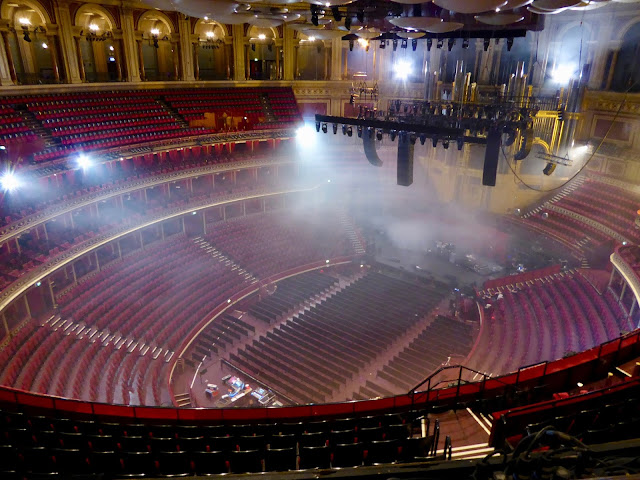 These are the views from the Rausing Circle (gallery) 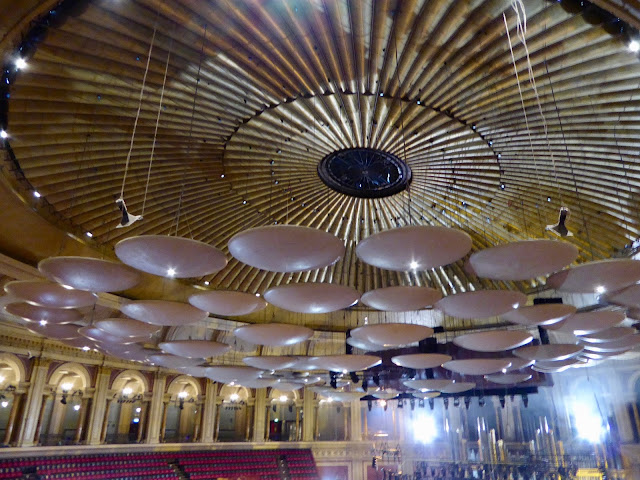 ... where the public can stand to watch/listen to the Last Night of the Proms for just £6.00 - a fabulous view of the whole theatre 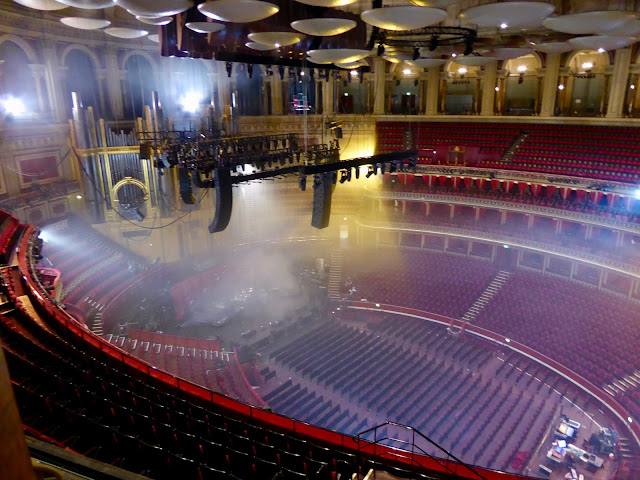 The circle can also be equipped with seats too, the whole hall can accommodate 5,544 including those standing in the gallery.

The tour lasted for about an hour and was really interesting with some fascinating anecdotes about the build and characters as told us by Pascal. 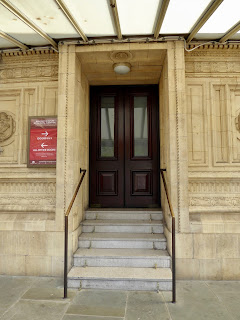 The secret door - no number here - it's only for the Queen!
The Royal Albert Hall - another London landmark not to be missed!
Posted by Carol at 14:33

Great posts of the sights of London. We want to do the London stretch but have always been concerned about mooring ... looks like we should be more concerned about rubbish in the canal.

Loved your entry for the Swan and Bottle. I had my 21st birthday party there, a while ago now !! We always stop there en route to/from the Thames even if we are trying cut back on eating out. In out first year on Newlands we had a running argument with the security staff for the offices opposite as we 'illegally landed' to take our wheelhouse down. Makes me smile thinking back how cheeky we were!

We have finally broken free of the marina and are enjoying a fabulous few days at Stoke Bruerne.

Happy travels, where are you heading after London?

Hi you two, I wouldn't put anyone off doing this trip at least once (each way that would be unless you decided to leave via Limehouse!), having the opportunity to prebook a mooring at Rembrandt makes it worth it that once.
We've been lucky and managed to get another week in Paddington basin and we'll probably leave here on Wednesday or Thursday to head back to the Thames. Are you heading that way too?