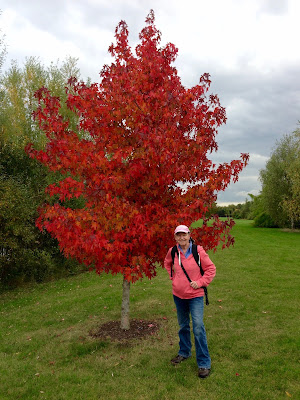 I forgot to add this to my posting when Sue and I walked through Dorney to the garden centre on Saturday ... a lovely picture. 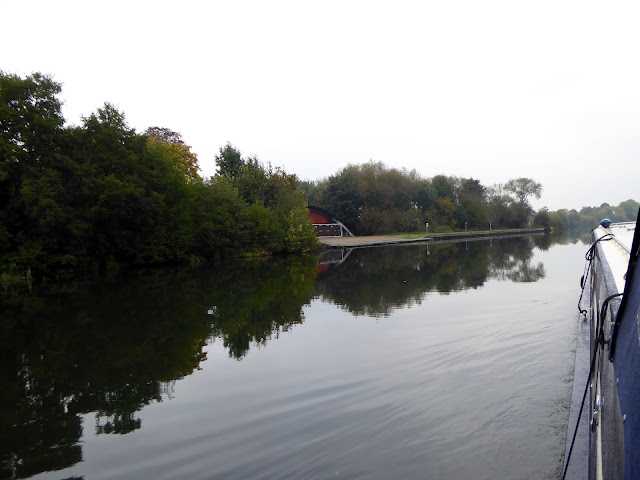 We didn't expect to be winding (turning) and moving back to this mooring on Tuesday morning ... 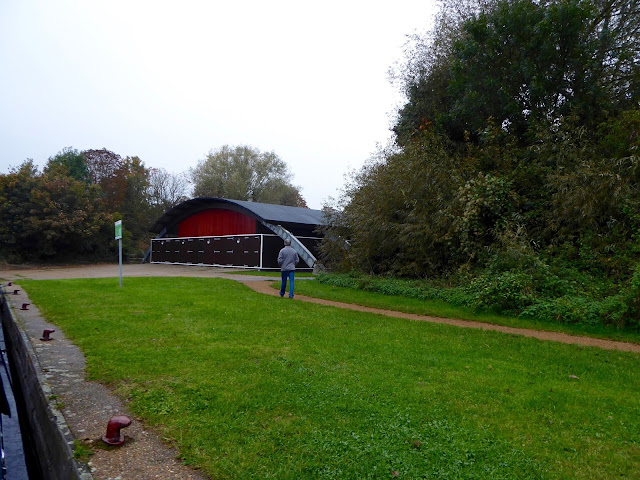 ... and we also didn't expect George to have to go and have a word with the reception staff at Eton College Lakes Boathouse ... why?

On Friday when we'd left Windsor and moored up just beyond Dorney Lakes George was concerned that the domestic batteries weren't charging as they should; the charging current was only 34 amps instead of 80!  Houston, we have a problem!   We nursed the batteries over the weekend, no washing done, no tv etc., but with a few amps in from the solar panels. On Monday George contacted Beta who confirmed it would be the alternator. Unfortunately now out of warranty he agreed to purchase a new one at an extremely good price from Beta for goodwill as it was only 18months ago that this one was fitted under warranty.  Beta will take the unserviceable alternator back to investigate the problem.  Beta sent the new alternator to Marcus Marine and we had a call from Marcus in the evening to let us know that he'd be with us about lunchtime on Tuesday.  Great!  All sorted!  Now we can get on with our journey to our winter mooring at Hambledon. 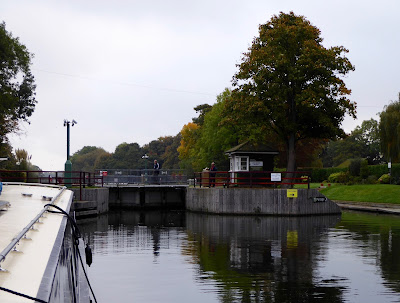 Wednesday morning ... we didn't expect to be continuing downstream through Boveney Lock 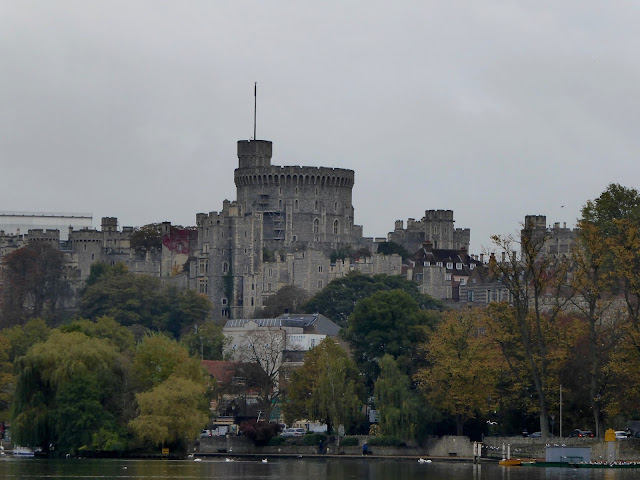 ... and we certainly didn't expect to be seeing the castle again until about April 2017!  Why?

A few weeks ago we took on diesel from Chris on nb Merchant and he agreed that he'd catch up with us towards the end of October to refill our tank before we settle in for the winter.  George contacted him on Wednesday morning to arrange the meeting but unfortunately because of an emergency stoppage on the reach above Old Windsor Lock which starts on November 1st and will last for three months he would be unable to service Still Rockin'.  Houston, we have another problem! Our tank is less that half full!  After a quick discussion we decided to continue downstream to Staines where Chris was currently moored for diesel and coal. 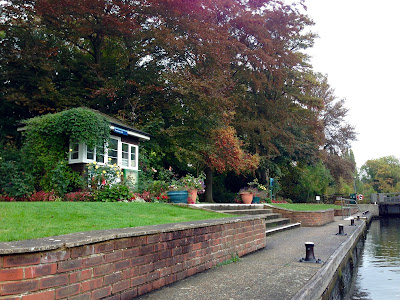 Through Romney Lock on self service but operated today by a boater waiting to come up the lock after we leave it. 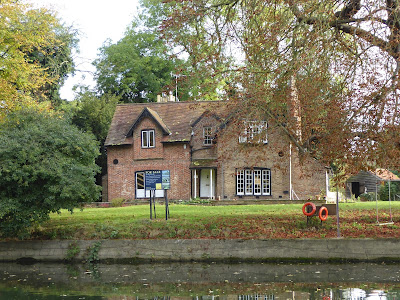 This house has fascinated me for years because the left half appears to be falling away from the rightside and now it's up for sale complete with the whole island and planning permission for a large house (click for better images).  Sorry but I couldn't find the estate agent's details of the property! 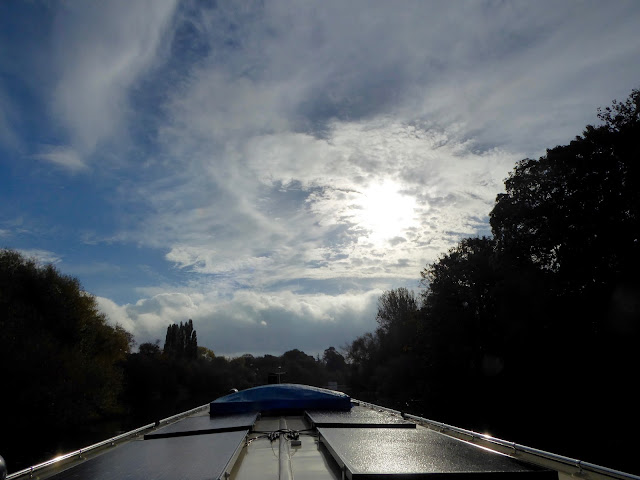 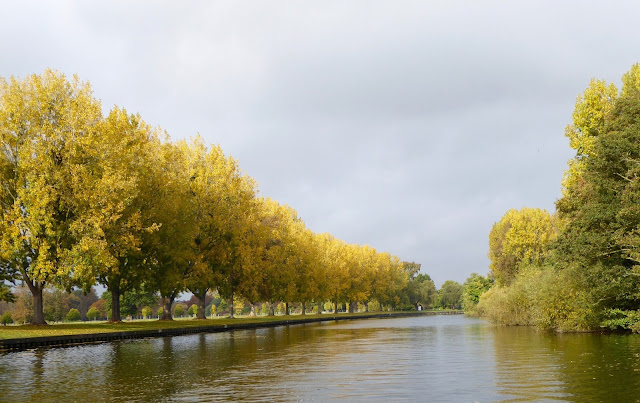 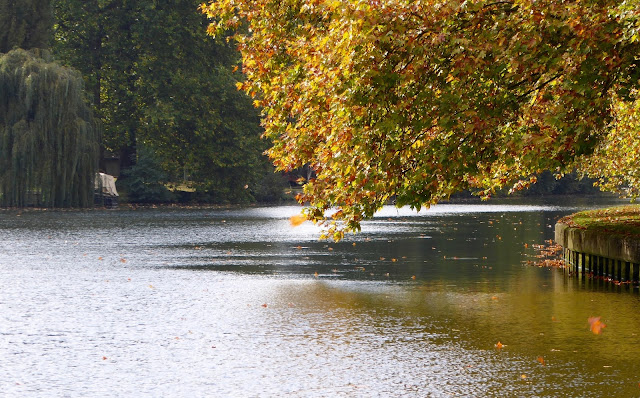 Beautiful autumn as we cruise through the Crown Estate 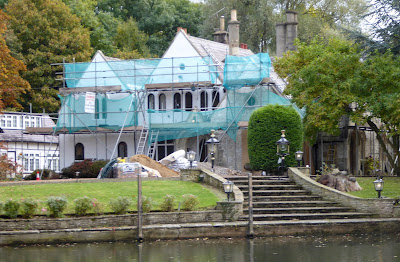 The house at Magna Carta island (the island where it's believed that the actual document was signed by King John) is having a rather sub-stantial makeover. 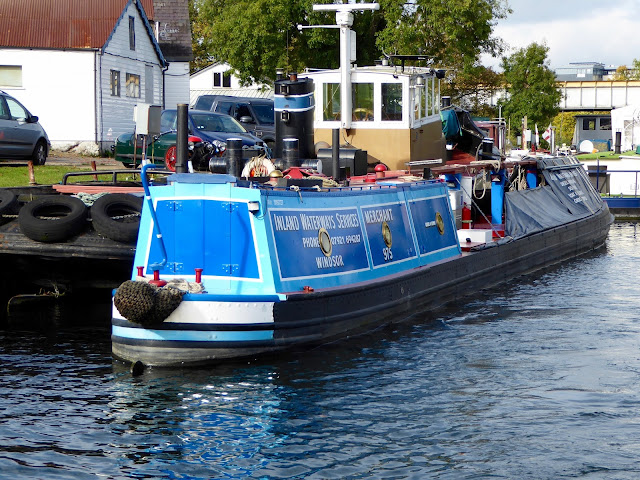 We've filled our fuel tank and are now pulling away from Merchant Fuel Boat but Houston we have yet another problem!  Why?
Chris has run out of coal! But he's getting a delivery first thing Thursday morning, so instead of cruising back upstream to Dorney, we've moored up near the town centre and will return to Merchant this morning for 10 bags of coal (6 for us and 4 for Sue and Vic).
Posted by Carol at 07:22

Problem solving keeps your mind ticking over! You did not say that your alternator actually got replaced. Hope all is well.

Lovely pictures as usual Carol. You have reminded me that I have pics on my phone too! I really must get them off and do a blog before I get told off!

The Autumn colours are becoming more beautiful by the day, it is just heaven being out here on the Thames at this time of year.. Pure bliss!

Here's the link for the island/house for sale - http://search.savills.com/list#/r/detail/gbwdrswds160120
Carole

All is fine Charles, Marcus arrived as planned on Tuesday and fitted the new alternator and we were ready once again to Rock n Roll! Regards to you both from both of us. x

You're right there Sue, can't think of a better place to be just now!

Thanks for that Carole, I'm going to take a look now!

Beta seem to have probs with the alternators they use. We had to replace our new one on Take Five (see blog) twice. As this was a new engine fitted by Oxley, the second time they opted for a Lucas which worked well. Hopefully it is still serving the new owners well!

Well that kept you busy for a bit, didn't it? I love those autumn colours, Carol. Gorgeous!