Inca for sale (no not that one!) 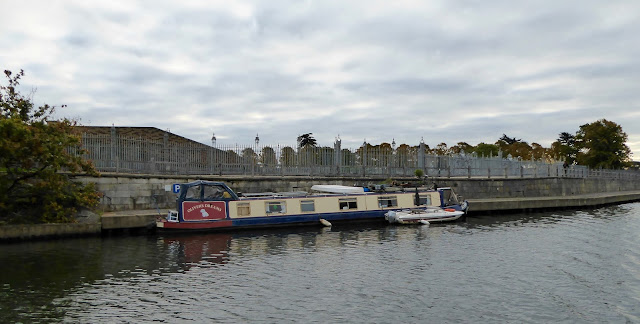 Ooh look, we weren't the only ones at Hampton Court, nb Oliver's Dream was right down the other end and has been here a while I think as the mooring warden was writing a notice for him and put it onto the boat. 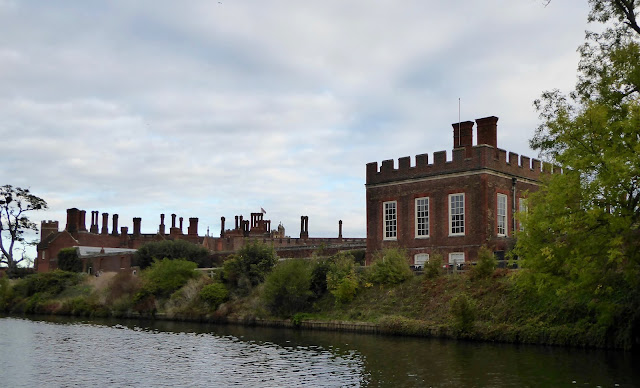 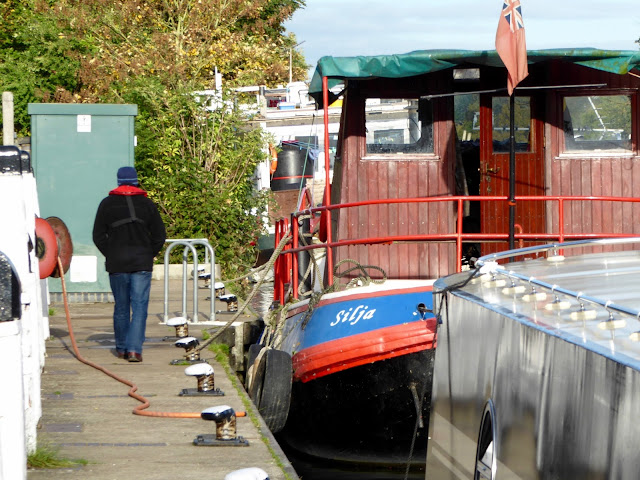 Up through Molesey lock we find this dutch barge has obviously been here all night with the water hose over his roof.  We knocked but no-one came and George noticed that the water was switched off so he pulled it off the roof but it wasn't long enough to reach our water tank.  We banged some more and a youngish chap came out and George asked him to move forward so that we could fill our tank and he had the audacity to ask if he could finish off filling his before he moved!  George told him in no uncertain terms, no chance! 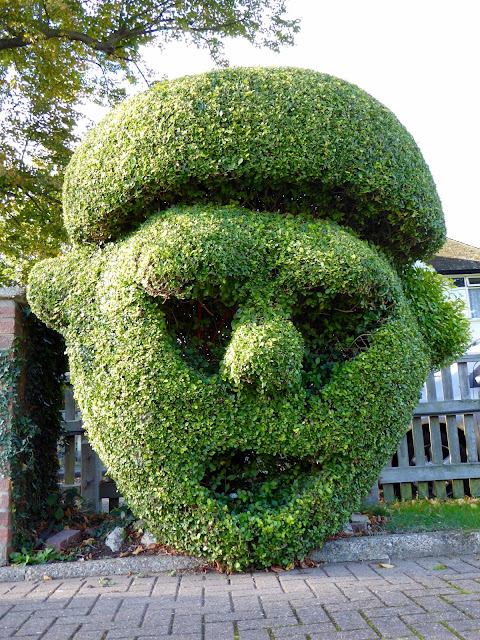 The Green Man of Molesey! 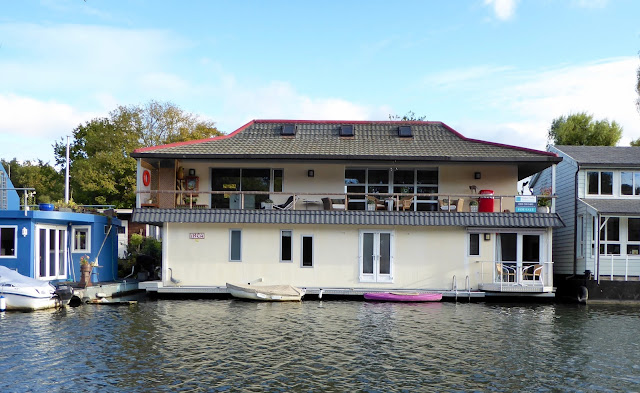 This is the Inca for sale.
This houseboat is moored above Molesey Lock and doesn't look much from the river but check out the link to see inside.  It's yours for £1,195.000! 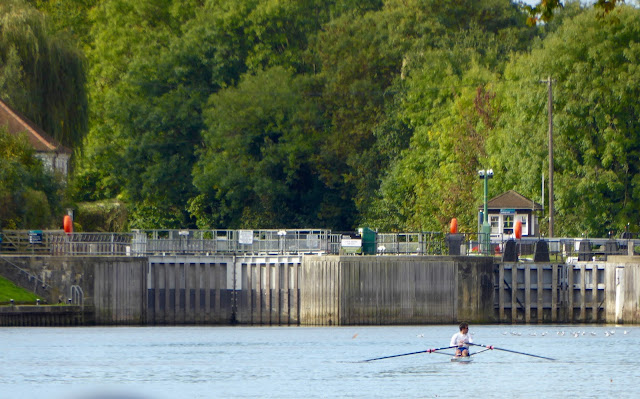 Sunbury is unusual as there are two locks here.  The one on the right is hand operated and was built in 1856 but is only used now if the automated one opened in 1927 is out of action. 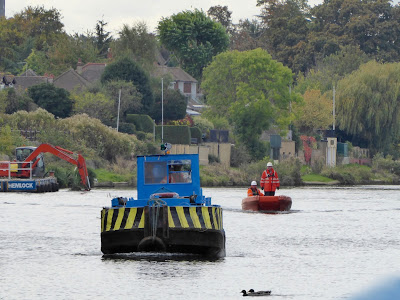 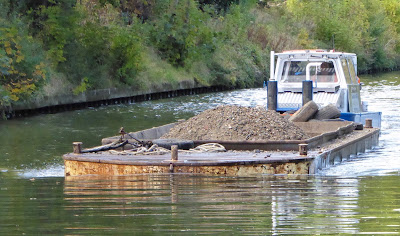 The next hopper full of spoil being transported downstream 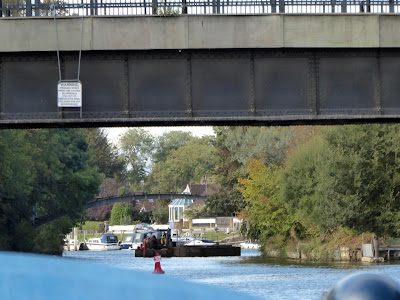 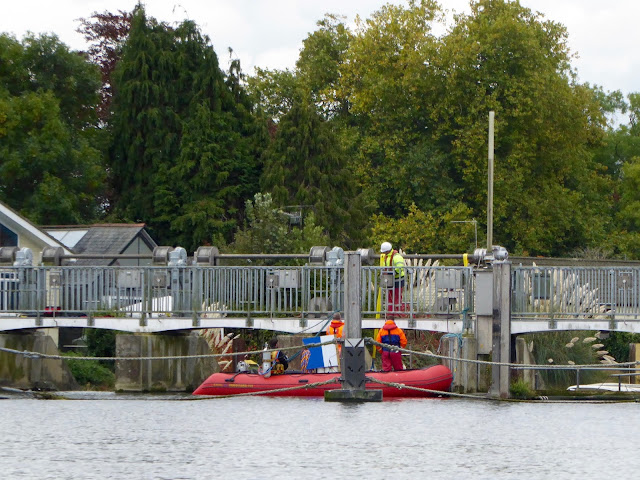 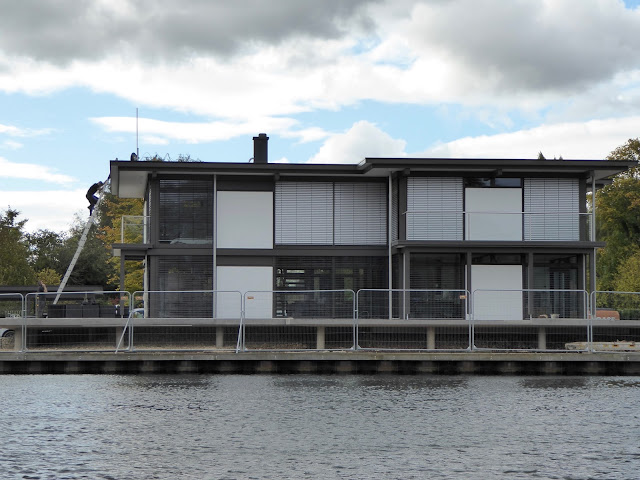 The Huff Haus opposite has come on leaps and bounds in the two weeks since we were here, it looks as if it may be lived-in now.

We'd planned to visit the pub for a meal this evening but decided instead to eat at lunch time which meant we could relax for the rest of the day.  We walked down to Nauticalia afterwards and George bought a very warm fleece to wear while steering in the cold weather and on the way back to Still Rockin' who should we meet but Ray on nb Stronghold with crutches!  George and Ray arranged to meet later for a drink in the pub.

As you can see it is definitely being lived in now although I can't imagine living there ... just imagine all the Thames Court patrons sitting outside in the summer gawking into your home all day and evening ... talk about living in a goldfish bowl!
Posted by Carol at 20:50

I just said to Vic "We really do need to do the lottery sometimes".. That was after looking at the details of Inca... BUT...... Nope we wont bother we are happy with our lot!!

I 100% agree with Sue/Vic. When we first launched our boat from Thames & Kennet Marina I recall our first trip up and down the Thames. At some point I was overwhelmed by the houses and (frankly obscene) amount of money on show. Clear as day now, my words to Carole (my carole) were "Good grief, what must it cost and where did they get the money to live here".

You just have to look at the new house at Shepperton and what it replaces to realise that money is no substitute for good taste and wasting resources.

Great to see you two again and good craic in the pub. Strange that we should meet up on my way out and on my way back after so many years of not meeting up at all. What Paul says is so true about the Shepperton house as I was there when they began demolition of a fine building - money to burn, but no taste.

Really good to see you too Ray! We'll be on the Thames next year and really hope we'll meet up again for a meal perhaps. Have a peaceful winter and we hope you get your legs sorted out! x