Retracing our steps and Mr Grumpy tops it all! 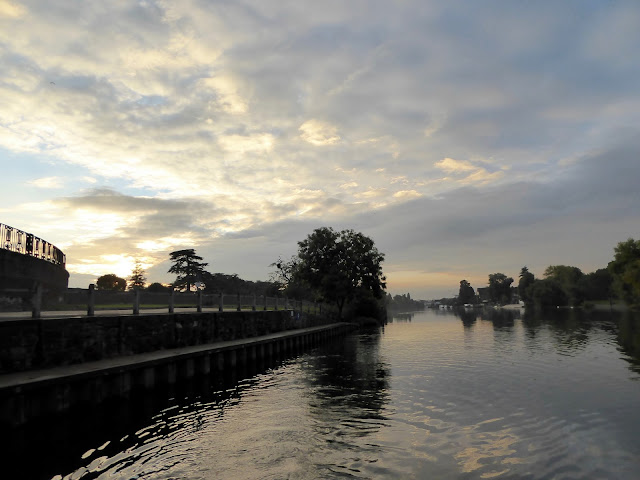 ... so at 7:45 yesterday morning we left Hampton Court 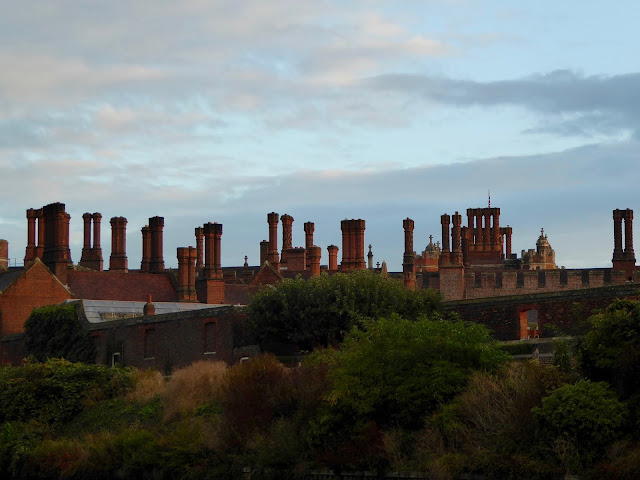 ... with the early morning sun making those chimneys glow and continued upstream 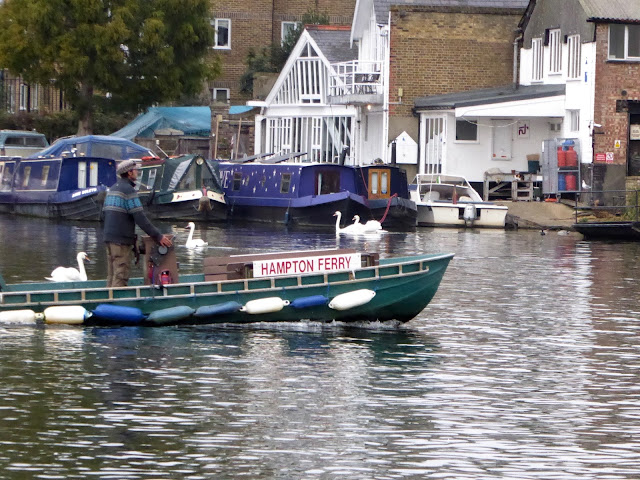 ... where the Hampton Ferry crossed our bows 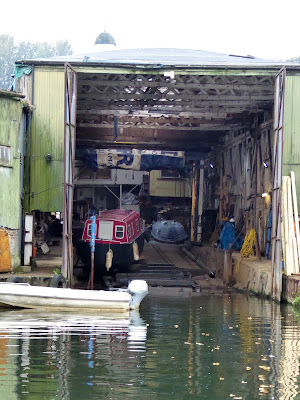 This is the first time that we've passed the boatyard at Tagg's Island and seen the dock open, it may be useful knowledge to wide beam/nb boaters to know that it's there. 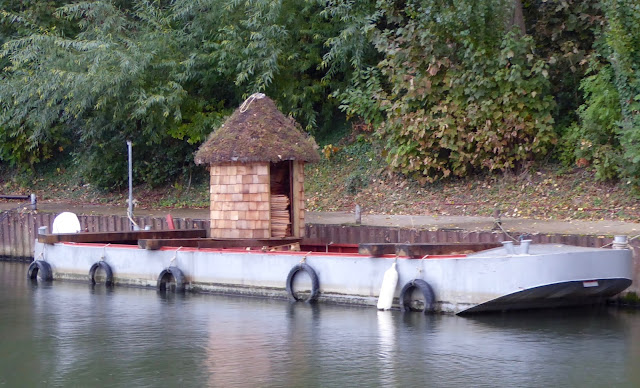 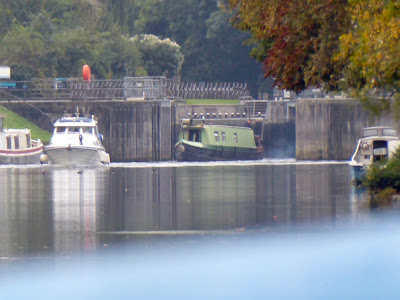 I love the full zoom facility on my camera as I can check on what's happening ahead ... like yesterday to check on the situation at Chertsey SunburyLock ... to see if it was manned today  ... it was and he left the gates open for us to go straight in. 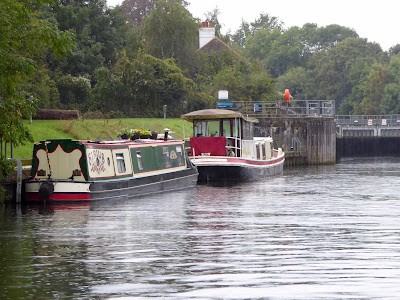 Which was a good job because boats Sirius and  Margaret Ann were moored on the lock landing and getting in and out of the space they'd left would have been awkward to say the least! 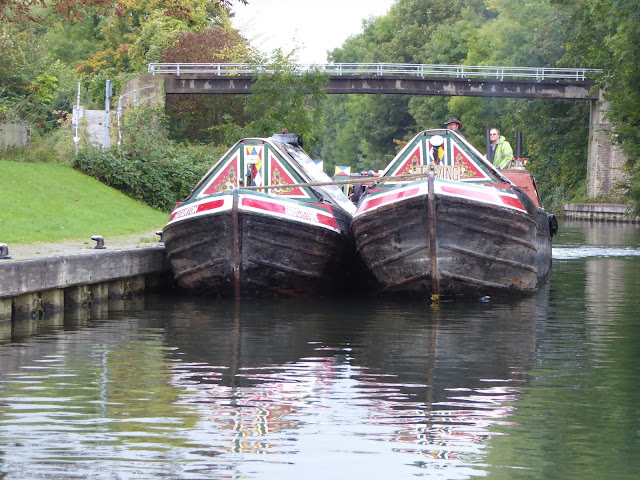 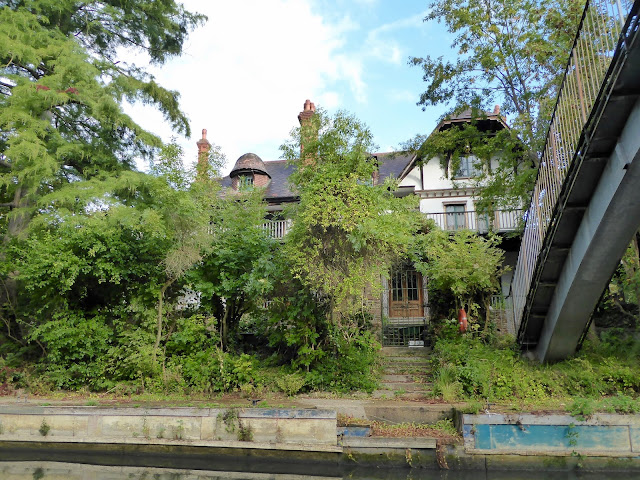 Not noticed the house on D'Oyly Carte Island before and wonder if anyone lives in it these days.
Before the 1890's the island was known as Folly Island until it was purchased by Richard D'Oyly Carte who was the producer of Gilbert and Sullivan comic operas between 1875-1896. 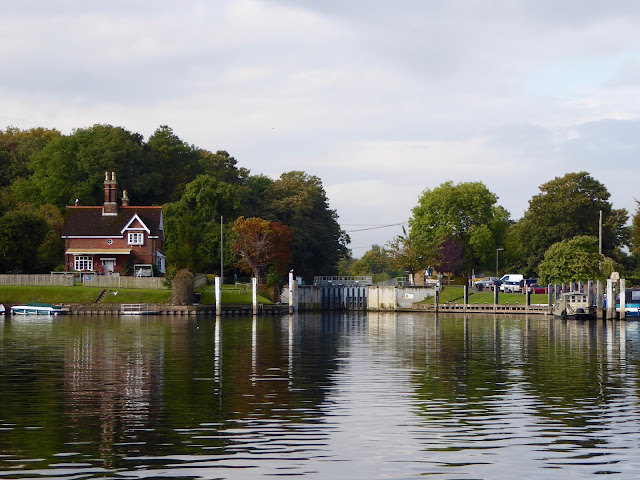 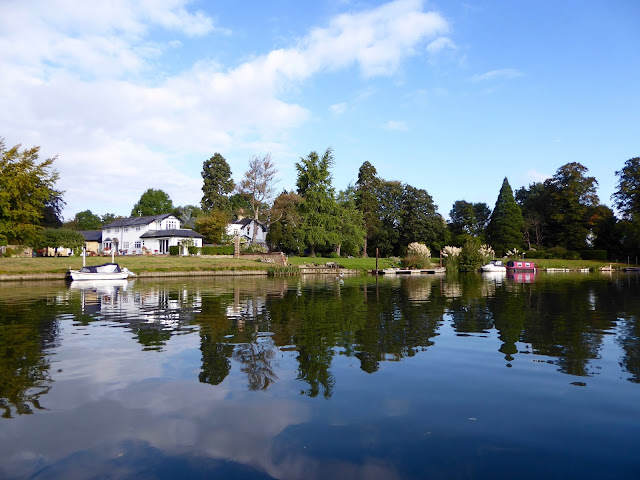 ... which really is in a beautiful setting 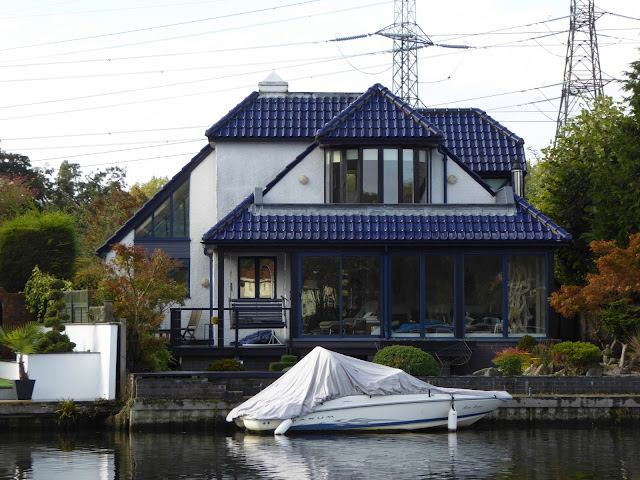 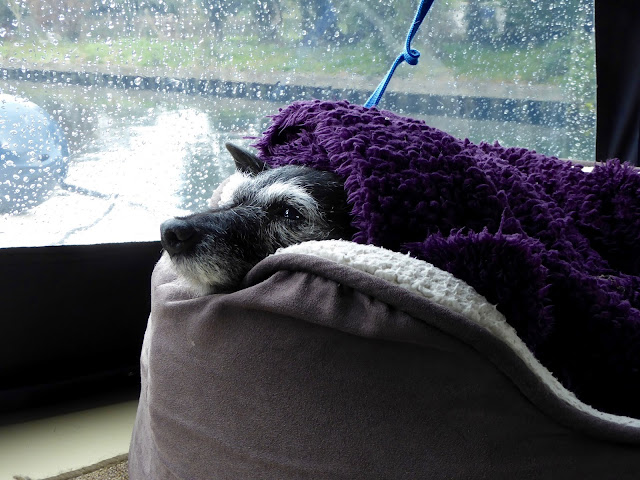 Molly in her cruising place, snug as a bug in a rug. 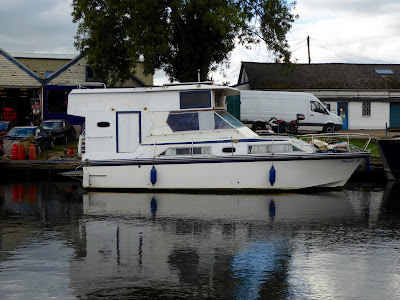 Trying to turn a cruiser into a motor home or maybe a motor home into a cruiser.  Whichever ... me thinks it's a bit heavy on the stern! 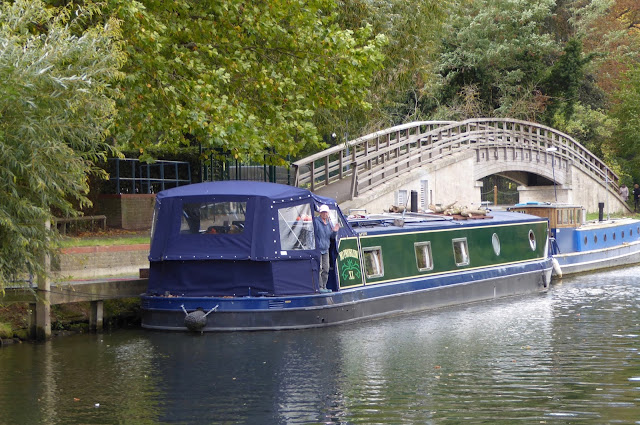 No Problem XL waiting for deliveries at Staines, we'll see Sue and Vic again at the weekend 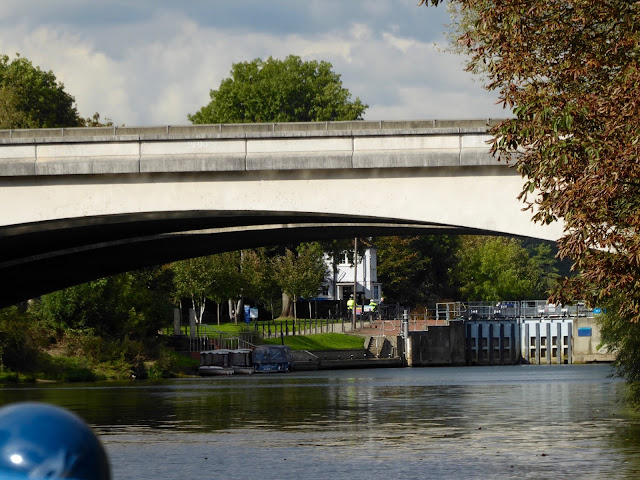 Using my camera zoom again as we approach Bell Weir Lock I can see the blue sign through the leaves that denote the lock is on self service so we pull up on the lock landing and I step off to operate the lock.
George and I are both pleased with this arrangement as it means we don't have the bother of the grumpy lock keeper who appears to enjoy thrashing boats about in the lock which has side and gate sluices pushing the boats away from the wall as it ascends.  It's ok if it's only you in the lock but if there are others, especially a tupperware boat it can be just a bit fraught attempting to prevent the boats banging into each other.
Well, I went along the landing and up the steps to the lockside and saw that Mr Grumpy was there seeing a cruiser down! Ok, I thought, he mustn't have had time to change the sign over.  I returned to Still Rockin' and we waited for the lock to empty and the cruiser to come out, the lock keeper waved us in and that's what we did.  It's quite a deep lock and so takes a quite a bit of concentration and effort to reach up the lock wall with the mooring rope on the end of the pole and wrap it around the bollard at the top of the wall and neither of us were expecting Mr Grumpy to come and help.  That done, we waited, I looked back at George along the outside of the boat and he was looking at me ... 'did you see where the lockie went?'  We couldn't see him anywhere and the lock gates were still open.
I fastened my mooring rope to the cleat at the bow and went through the boat onto the stern deck where I walked carefully along the gunwale trying not to touch the slimy lock wall until I reached the steps and stepped off. Once on the top of the lock I could see that Mr Grumpy was nowhere to be seen and the lock office was empty!
We assume he'd gone to lunch and had changed the sign to self service whilst letting the cruiser down, but why, why on earth didn't he indicate to us that we needed to operate the lock when he waved us in instead of leaving us deep in the lock with the gates open and no way of easily remedying the situation.  He would have known it would be difficult for us to sort it out but perhaps that's why he did it.
We've had several encounters with this unpleasant man, he's ignorant, positively rude and couldn't care less about his customers.  I've said it before and I'll say it again ... if he doesn't like his job he should do us all a favour and find another one.  Rant over but I'm still fuming! 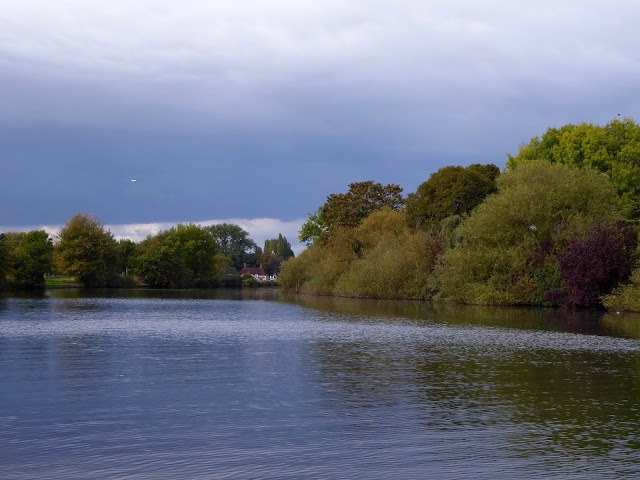 It was 1:45 when we reached our destination where there were spaces galore. We'll spend a few days here at Runnymede before retracing our steps once again to Kingston for that delivery.
Posted by Carol at 13:41

He did exactly the same thing to us 20 years ago. How he has lasted this long we'll never know. Sue says she got him to smile once but I think it must of been wind.

Maybe it is time to give some feedback directly to his employers, Carol. If they don't get told, they cannot do anything about it. You could be the start of making a change there! On to it, girl!
Mx

I'm sure your were right Andy. I fail to see how he's got away with this bad behaviour for 20 years without being pulled up by the EA or previous employers.

We have been thinking of doing this Marilyn, I have plenty of evidence on my blogs whenever we've been through Bell Weir and he's been on duty. Hope you're still enjoying your mad dash around the UK! Regards to you both. xx