… we don’t usually cruise at the weekend!

We left our mooring at about 9 this morning and saw nb Pilgrim which is a rather pretty boat with a very unusual cratch cover, the ‘tent’ is an extension of the cratch board which is hinged and folds back onto the roof when cruising. 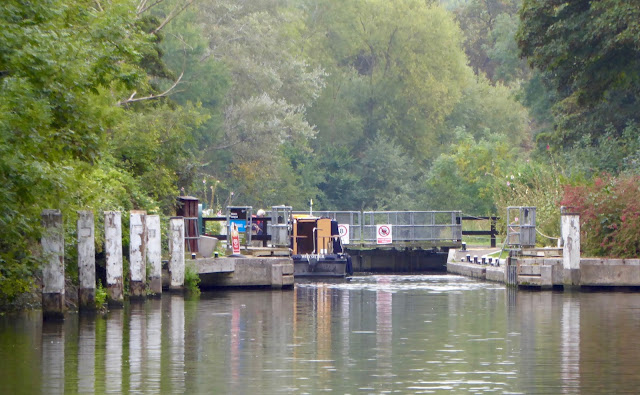 Sonning Lock is on self-service and nb Wey Otter is waiting for us to go in with them. 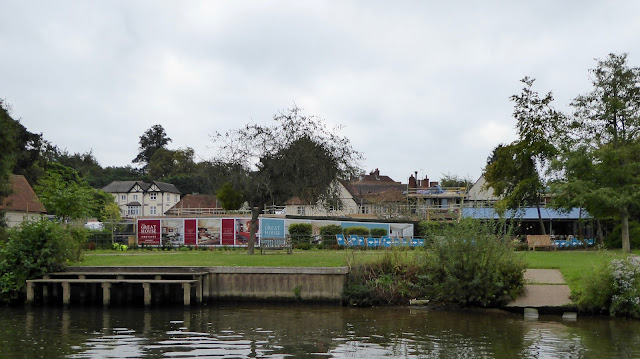 The Great House at Sonning incorporating the Coppa Club restaurant is undertaking ‘a wonderful transition’. 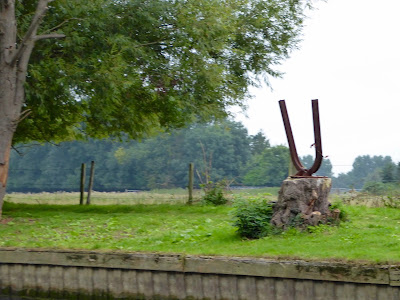 Passing Uri Geller’s pad although I’m not sure that he’s sold it yet. 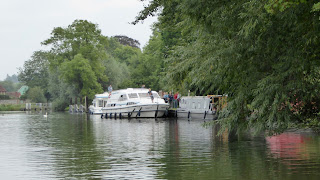 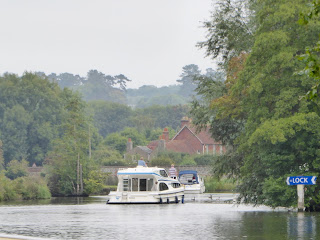 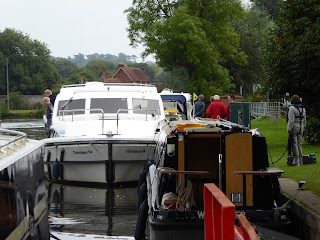 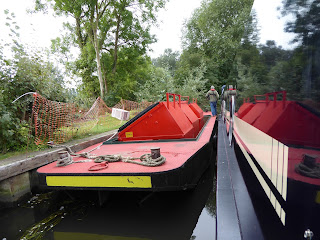 … and we have to moor abreast the refuse barge … this is the view in front of us all waiting for water, pump outs and elsan use. 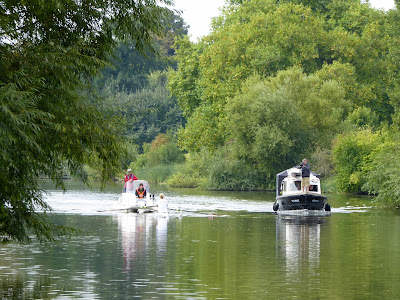 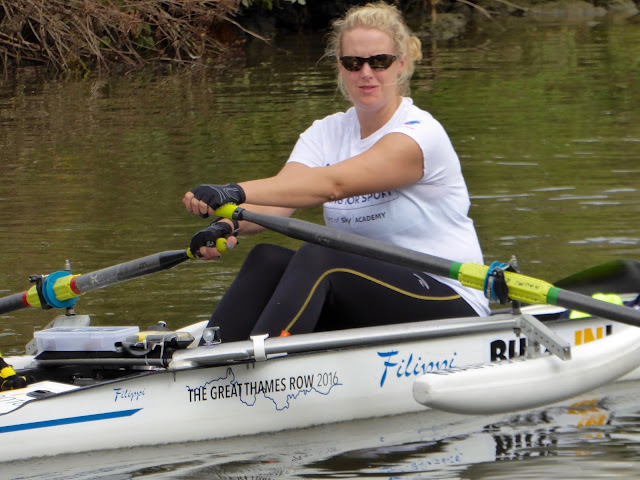 Naomi Riches gold medal winner of the 2012 GB rowing team is rowing from Lechlade to Gravesend in 50 hours or less to raise money for nystagmus an eye condition which currently has no known cure. 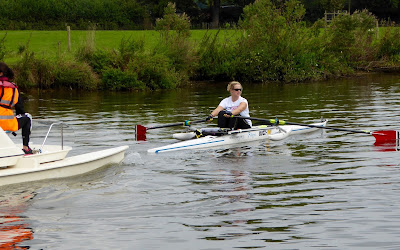 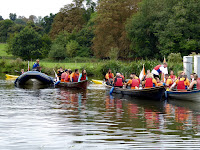 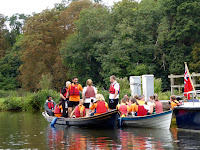 … and while we waited 2 rowing boats, each with 6 rowers and a coxswain arrived and then there was another and another 2. Glad we were going down before them! 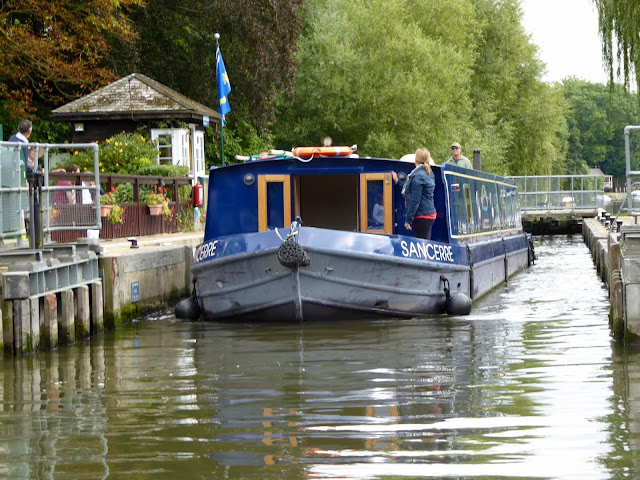 The lock cut was considerably restricted with the cruisers, rowers and our wide beam and it was sod’s law that it was another wide beam that came up but wb Sancerre had no problem getting through. 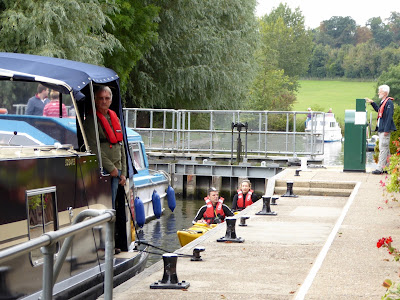 We eventually shared the lock descent with a cruiser and two canoes. 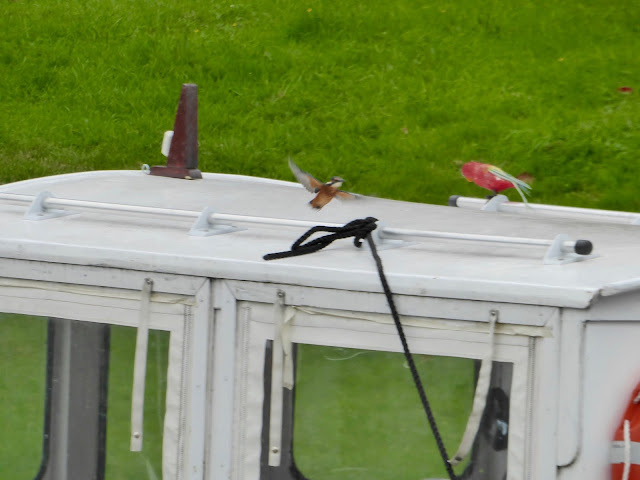 Can hardly believe I got this picture of a kingfisher taking flight from a moored boat!  I think/hope that the red bird is a toy ?? 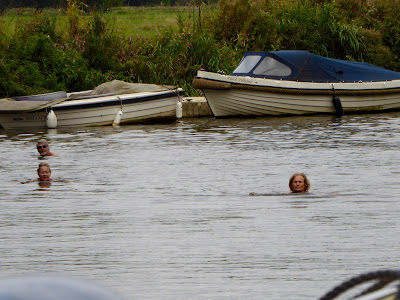 We met swimmers in the river on a bend and warned them that a boat was following us and then had to warn yet another wide beam that swimmers were in front of him! 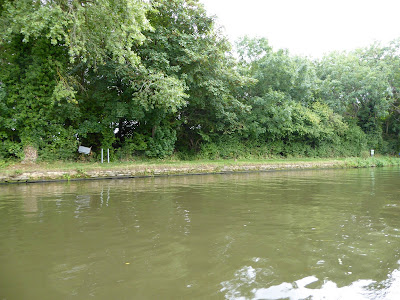 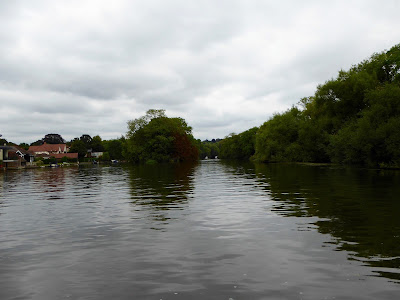 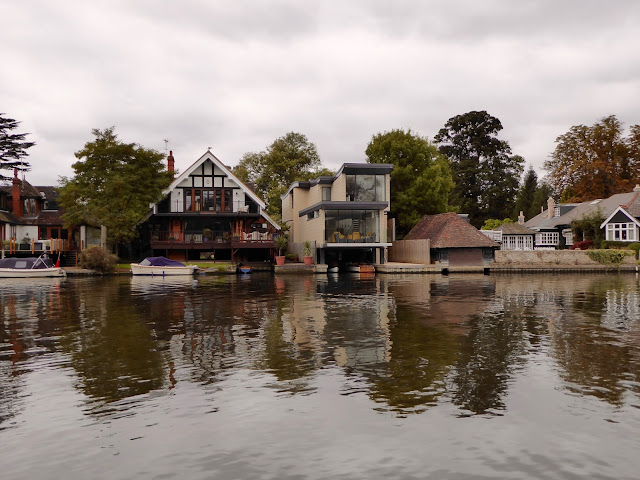 … passing this row of houses, I’m sure that the glass block house was featured on Grand Designs a few years ago much to the annoyance of residents of the more traditional River Thames buildings. 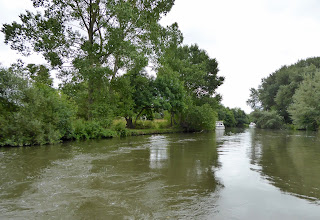 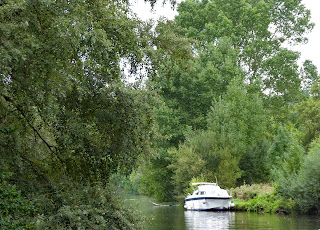 Left again and the best mooring space here was unfortunately  already taken and two of the other three are also taken. We did manage to get in just beyond the boat in the first picture above on the other side of that branch in the water.  The only problem was that our bow went over the log and tilted us a bit.  We spoke to the cruiser owners and they would let us know when they were moving so that we can move up. 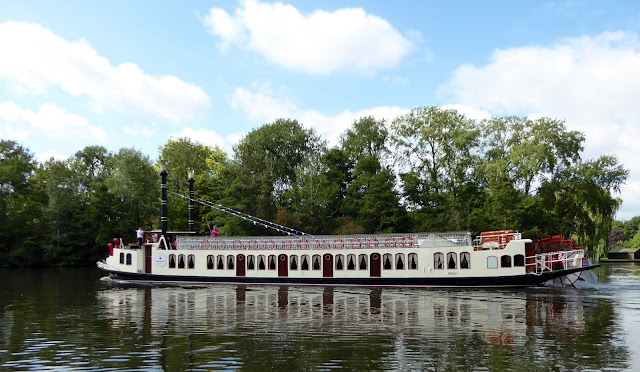 In the meantime trip boat The New Orleans went by 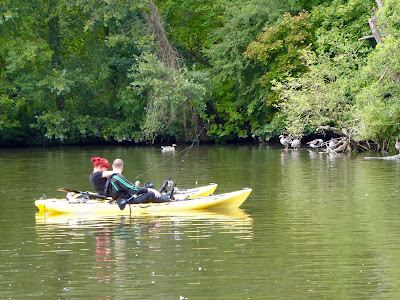 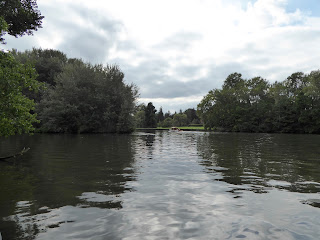 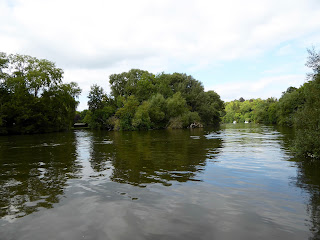 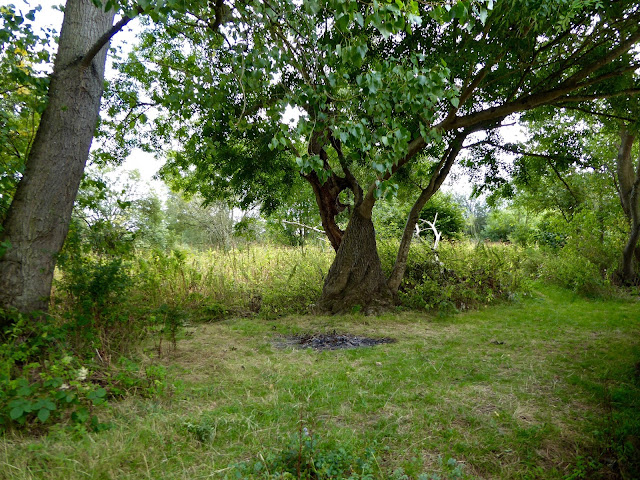 
At about 4pm the chap on the cruiser came to say he was leaving if we wanted to take his place, he also told us that the other cruiser had left as well.  We pulled the pins and moved up onto the best of the four moorings here on Wargrave Marsh and it wasn’t long ... 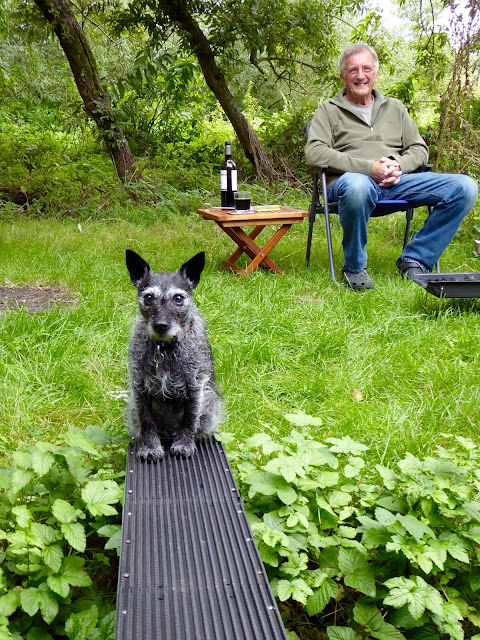 … before the plank was out, Molly was happy to be able to come and go as she pleased and George … well you can see for yourself … a bottle of wine and the bbq in one of our favourite spots … what more could we ask for! 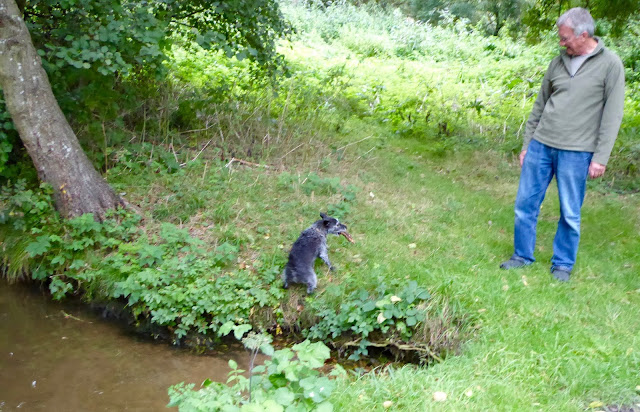 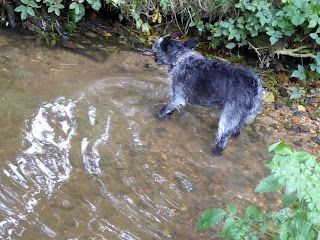 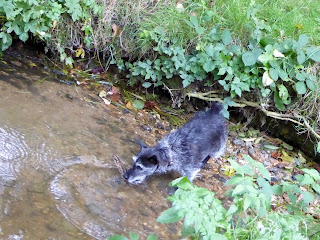 And the title?  Ever since we started cruising the inland waterways we’ve usually not cruised at the weekend. We have 5 days every week to move on and often weekends are far busier so we take the opportunity on Fridays to find a lovely mooring for the following two days. Except that this weekend we thought we’d chance it and remembered the why we didn’t before!

And the ‘but’?  Although it took much longer to get here than usual and although the mooring we wanted was not available we got there in the end and are having a lovely time … so it all turned out right in the end!

The forecast tomorrow is for rain so we shall stay here another day and relax.
Posted by Carol at 19:30

What an excellent photo of Molly, Wine, BBQ, oh & George of course LOL

I think you are right, it does look like the 'Grand Designs' house and
yes I too recall that the neighbours were not too friendly, NIMBY in fact!
Personally I'd rather have what is there now than a run-down derelict home ;)

The Coppa Club is certainly a couple of rungs higher than Weatherspoons... LOL