Yesterday George and I travelled to Southampton to support Ann and to say goodbye to boater and friend Charles (Chas). 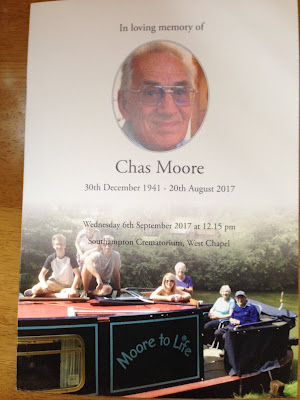 With Sue (No Problem xl), we attended a lovely service which was well attended by family and friends and listened to eulogies given by old time friend, colleague and boater Colin who'd known Chas for 55 years and from Chas' grandson Josh who very bravely spoke of his love for his granddad and we sang a couple of Charles' favourite hymns.

At the wake we spoke with quite a few boaters that we'd never met before and we spent some time with Terry and Myra who with Ann and Charles purchased a boat many, many years ago to share, their very first narrowboat.  We talked with Charles' family members and expressed our sorrow at their loss and exchanged our connections to Ann and Charles.

We had arrived in Southampton earlier in the day and spent a couple of very pleasant hours looking around the docks ... but more of that in another blog post.
Posted by Carol at 05:52

A very sad day indeed Ann, in fact one meeting with boaters that none of us really wants to happen :(

My name is Carol!

BTW I am now granting you the same editorial rights that I have given to Sue (NP), please feel free to correct any errors I make before you hit the publish button :)

Hi Thanks for coming it was nice to see everyone on such a sad day. We did have good friends on the canal ,we both missed very much even Molly took a long time to settle. So thank you for comments and cards xx

Hi Ann, lovely to hear from you.! We were pleased to be able to attend on Wednesday and to meet your family, we'll stay in touch. In the meantime be good to yourself and we hope that the house sale goes through ok and you find a new home very soon. Kind regards from both of us. xx