Back to the previous one and meetings from abroad

We've been informed that someone is returning to their boat in Henley but that they would be continuing their journey upstream ... 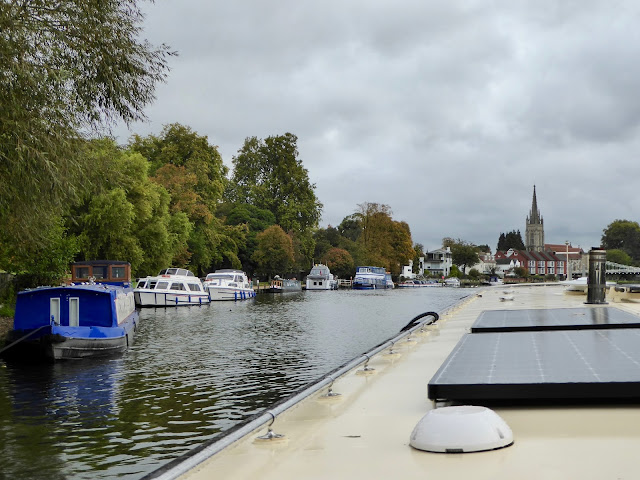 ... so we winded away from our Marlow mooring this morning and set off upstream once again 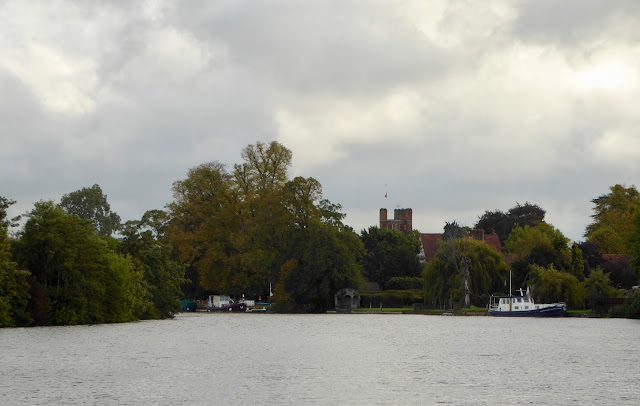 Looking back at Bisham Abbey 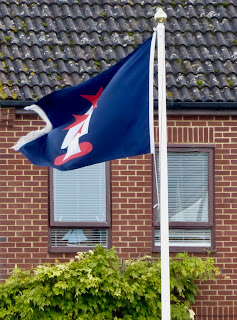 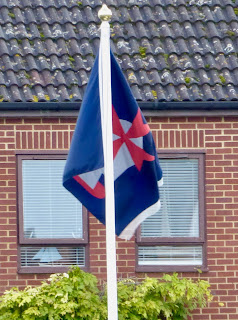 Anyone know what this flag represents?  It looks like a stylised windmill with Maltese Cross wind vanes.

Our cruise was exactly the same as yesterday except in reverse.  The same three locks Temple, Hurley and Hambleden.

As expected seeing that it was before 9am, Temple Lock was still on self service and I hoped that the 'couldn't-care-less' boater who left the gates and sluices open didn't sleep well last night for having a guilty conscience!  We topped up the water again at Hurley and ascended through Hambleden with no problems at all. 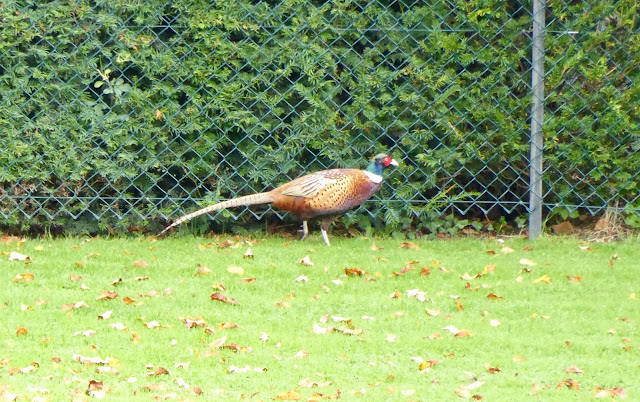 Watch out there are pheasants about! 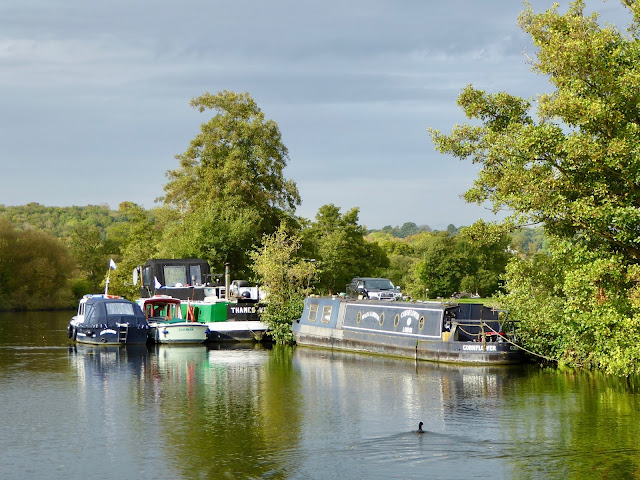 Steve from SRB Moorings appears to have moved his base from Henley to Medmenham, he collects mooring fees from both sites. 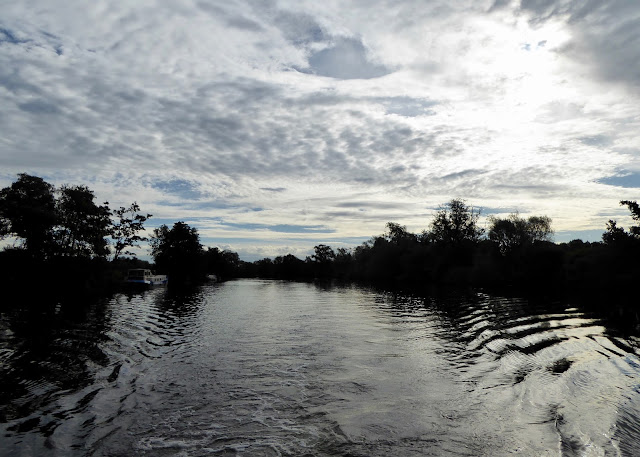 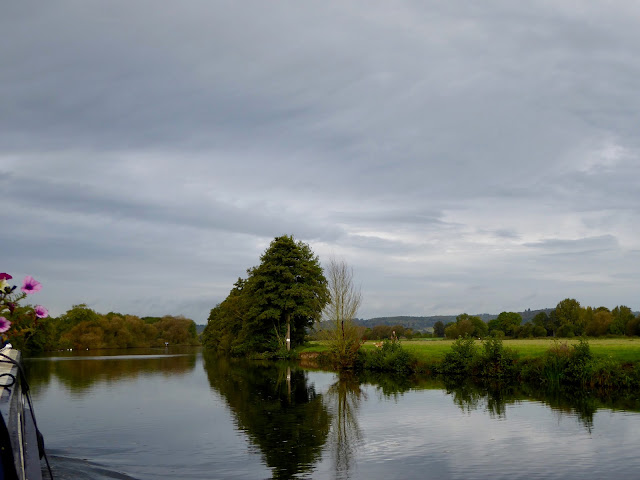 ... a bit different from that in front of us 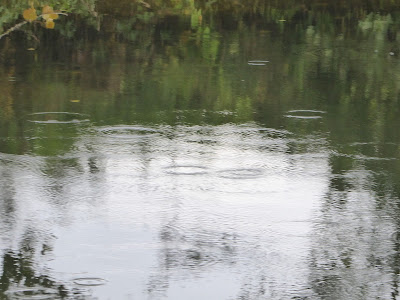 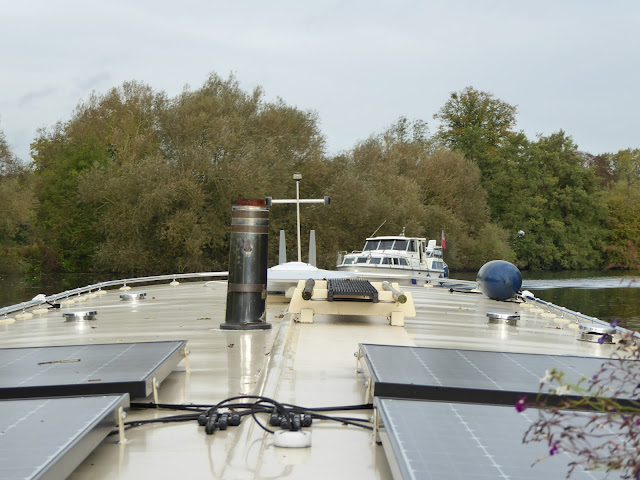 The only other boat we've seen on the cruise today 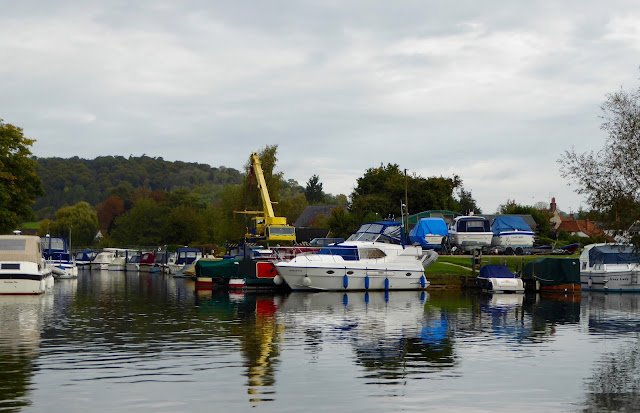 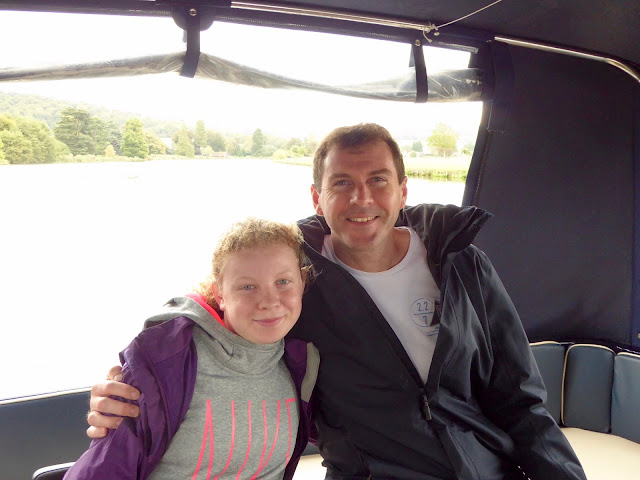 This is Amy and her Dad Alan from Sidney.  With Amy's Mum and brother they were watching us pass through Hambleden Lock and I asked if they were on the way to Henley and if so would they like a ride.  Brother was not too keen so he and Mum walked and  Amy and Alan came onboard.  Before emigrating to Austrialia, Alan worked for BW for 17 years I think he said - what a coincidence that was!  We enjoyed their company and dropped them off just before Henley Bridge. Great to meet you both, enjoy the rest of your visit. 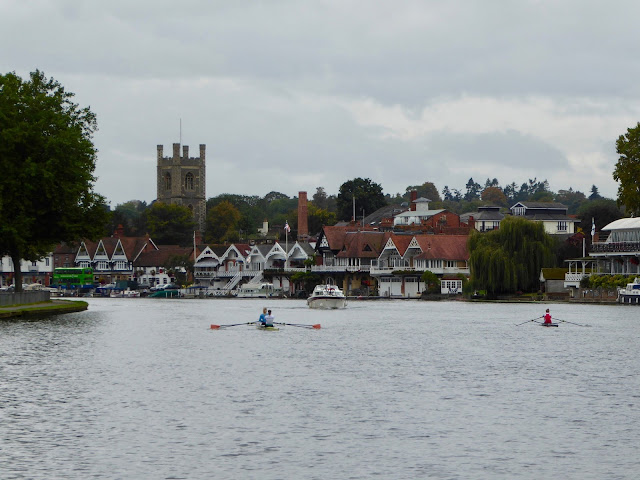 Back at the previous icon once again where a few other boats were moving and we continued towards the lock to moor up.

A lady was jogging along the path and asked if she could take our rope and as we never turn down offers help I threw the bow rope to her and she put it through a ring and passed it back to me.  She introduced herself as Lynne (hope that's the correct spelling) and she hails from Montreal  Canada (the French half, that's important, she said) and lives there in a condo on a small island and is on holiday here.  Great to meet you this morning Lynne, enjoy the remainder of your holiday here.

Looking forward to meeting up with friends tomorrow.
Posted by Carol at 15:11


Ah ... there you are !!! We (Carole at least, as I was working) came to say 'hi' when we were in Marlow yesterday but got no response. Then we went into Marlow for the evening so didn't get another chance before you left this morning (29th).

Loving the addition of dates to the blog. Makes it so easy to get my bearings when I'm catching up :)

We've continued downstream and are on the much contended 'best' slot at Clivedon, so perhaps we won't cross paths again this year. Shame. Hopefully there's next year and our turn to host you on board.

Although, once we're back on land (Boooooo!!) there is always a chance we'll be passing Hambledon on our 4 wheeled travels.

No problem. I've no idea why we didn't hear Carole when she called as we were in all that afternoon, but never mind. We'll be here for the weekend and then will continue down stream again. We're still intent on reaching Kingston in the next week or so, but if we don't manage to meet up again before you head off home for the winter, I hope we'll see you both again on the Thames next summer.

Lovely to read that you give people a ride now and then. It must have made their day! Gorgeous views and images of the river again, Carole!