The delivery … so check your life jackets!

A week or so ago I was reading Indigo Dream’s information regarding travelling on the River Thames, (some really good stuff on here, tide tables/heights from Brentford and all sorts of useful info). Anyway I read about the importance of checking all your equipment before going onto the river including your life jackets which I have to admit had never occurred to us and we had no idea what needed too be checked until I researched the internet to find out. There’s lots of information out there and demonstrations on youtube.

There are two elements to the equipment in life jackets, the water sensor with pull cord and the charger which is the cylinder containing pressurised gas to inflate the jacket.  There was lots of information and videos on u-tube explaining much better than I can about how to test these elements and replace them if necessary.

When we checked ours we were mortified! We have four onboard and all of them were out of date (we thought that if they’d not been used in anger they were good to go).


The water sensors are dated and when new should have up to 6-years ‘use by’ dates on them.  Two of ours went out of date in 2012 which would only have been a couple of years after buying them!  The other two expired in 2013.  As I say I was mortified.

**A lesson here that perhaps other boaters don’t realise.  When you buy a new life jacket always check that the water sensor has a decent date and the red pull cord is properly fitted.

We realised that when we purchased both sets there must only have been a couple of years on them before they expired, not that we’d have realised that it could have been much longer, but now we know!

So then we set about finding where to buy them, but more importantly, and much more difficult was how we would get them to us before we ventured onto the River Thames.

Martha, the sales assistant at Marine Warehouse was very helpful but couldn’t ship the replacement water sensors directly to us as we hadn’t got an address near to where we were at the time or near Brentford where we were then heading.

These items can also be purchased from the likes of Amazon and E-bay at a slightly reduced cost than Marine Warehouse but they still come from Marine Warehouse as the seller on both web sites and we still needed to overcome the problem of not having a delivery address.

I had contacted the Post Office in Brentford and they did not offer the Post Restante service in fact they had no idea what we were talking about!  There’s a Parcel Hero office at Brentford by the water points so we called there too but they don’t actually take delivery there either and the system to use them as a carrier was far too complicated for us.  Once we ordered them we needed to know exactly where and when they would arrive.

In the end we asked our son who works in London if we could send them to his home address and he would bring them to us the next time he was working down here so that was the delivery we had last week.

I know you were expecting something spectacular and special, sorry about that, but it was very important!

So, four sensors safely in our possession; how do we change them? 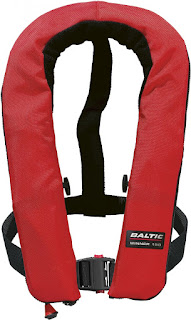 - these are the two different types that we have onboard Still Rockin’.

Once we’d replaced the out of date sensors George actually tested them by submerging them in water - two worked and two didn’t but one of the ones that failed did work when he pulled the cord and one didn’t work at all!  There’s a salutary lesson to be learned there, it could have been disastrous.
Posted by Carol at 14:01

We replaced our life jackets recently and they both have 5 years before expiry.

The old ones were ready for rearming but we decided it was time to replace them instead. Prior to replacing them we tested them to see if they would have worked. Liams did, mine didn't. We don't know how long or how many times at sea I had been with a non functioning life jacket!

Our new ones have a clear window on the front with red or green indicators that tell you if anything is amiss.

Even with new ones you can never be sure they will work until you need it to! Scary indeed.

Thanks for this, ours are only 2 years old (same as our boat) but I will definitely check them

Thanks for the comment, glad the blog post was useful to you. I don’t usually post anonymous comments and wish you could have stated your name.

Aha, so that's what it was! Is it necessary to have this type of life jacket? Ours are filled with something like styrofoam, so we don't have these gas thingies. Would they still be valid in the UK? We use them for everything here.

Thanks for your next comment Rachel I’ve clicked to publish it but it hasn’t appeared here for some reason. Sorry about that.

Thanks for confirming Carole, sorry but for some strange reason when I’ve clicked publish on your comment it’s disappeared! Hope you’re continuing to enjoy your cruising, where are you this year?

Hi thanks for the heads up with the life jacket use by date. Ours were dated 2014.
I promptly ordered some on Ebay and used the ever useful option for Click and Collect at Argos.
2 days later we arrived at Gloucester Docks a quick walk into town and job sorted.
Cheers Roger & Yvonne (N.B. Fizzical Attraction)

Thanks for your comment, glad to have been of help in keeping you safe makes the blog worth writing! Happy cruising.

Hi again, when I tried eBay I couldn’t see Argos listed on the click and collect and it would be very useful to be able to do this as you say. Any tips for doing it right? Thanks.

Hi Carol, not all listings offer the Argos option, more and more are thankfully doing so. Example http://www.ebay.co.uk/sch/i.html?_from=R40&_trksid=p2062857.m570.l1313.TR0.TRC0.H0.XLIFE+JACKET+KIT.TRS0&_nkw=LIFE+JACKET+KIT&_sacat=0
You select the item you want to buy and before purchasing use the link on the page to select a store in your area. When you go to check out that delivery option and selected store is already entered, pay in the normal way. Be sure to add your mobile number at the end of the process and they will text you with the collection code when your product has arrived. If you forget they will email you anyway.
Roger

Thanks for that Roger I now know what to look for.