Hard work but enjoyable too. 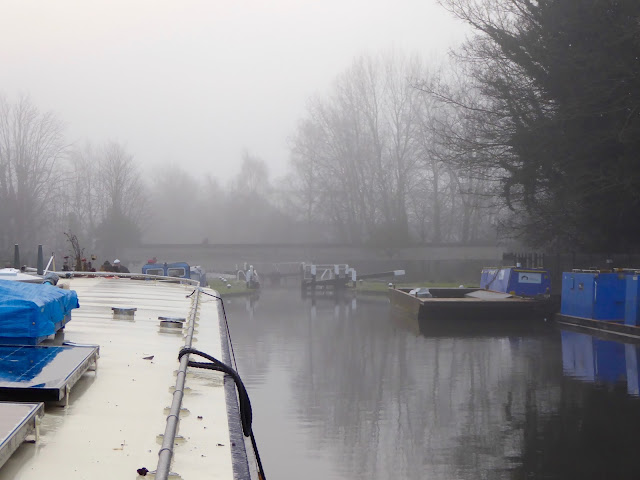 ½ 8 yesterday morning, it’s cold and misty. C&RT are loading and moving their fleet closer to Kings Langley and at the moment we can’t get to the water point as there’s a small nb moored in front of us on the service point only moorings and a CRT tug on the lock landing being loaded. 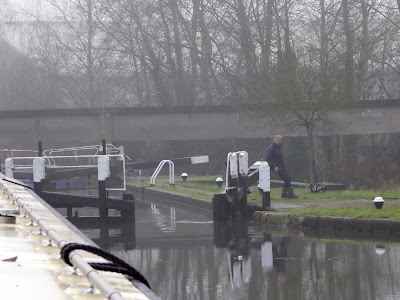 9:30 water tank is now full and we’re ready for the off 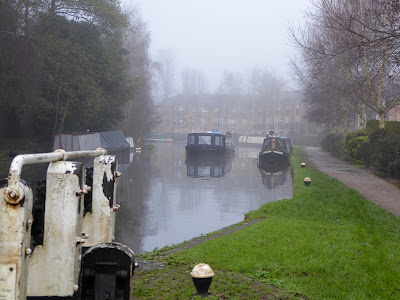 The top gates of Apsley bottom lock were already open so that was ok, less work for me! 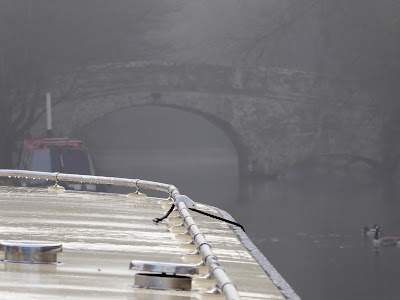 I stayed on Still Rockin’ instead of walking ahead as George likes a bit of moral support here at his very favourite (not) bridge just past Apsley Marina.

We continued through Kings Langley Lock which will be closed for maintenance from 11th-29th January and on through Home Park Lock, after which we stopped for lunch as it was going to be a long day. At lock 71 North Grove the previous boater had left the bottom gates open so a bit more work for me before I could set the lock for SR. 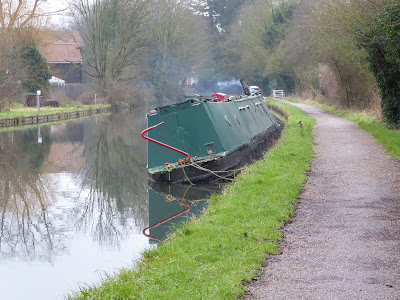 A bit of a tilt on this boat near Hunton Bridge.  I wondered if the owner knew but on walking past saw that there was no name, no number, no licence either.  I saw more than half a dozen unlicensed boats on my lock walking yesterday. 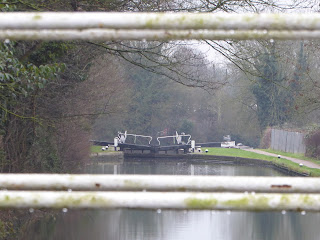 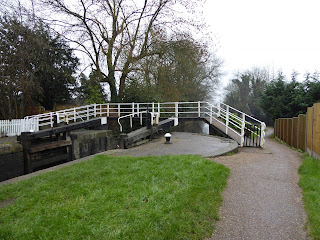 Hunton Bridge Locks (where we had problems with low water a couple of months ago) and the previous boater has not only left the gates open but the paddles too.  A lot of the lock gates on the Grand Union Canal are extremely heavy and I often have difficulty getting them moving so I was annoyed to say the least when I saw that the bottom gates of the next lock down were also open with the paddles up. 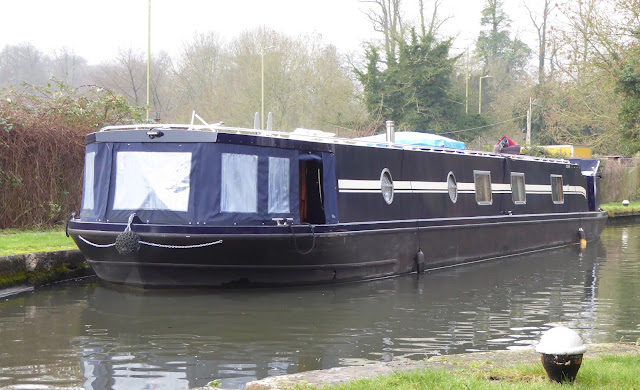 George has caught me up and has moored SR on the lock landing and is helping me to set Lady Capel’s Lock.  Molly sits cosy in her bed waiting and watching patiently. 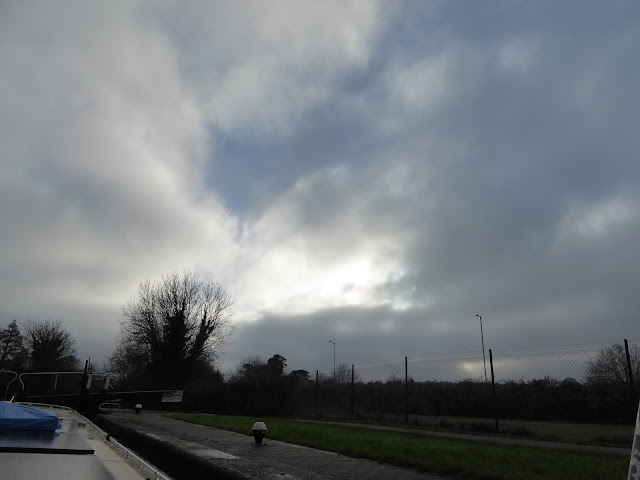 The sun tried valiantly to shine but never quite made it. 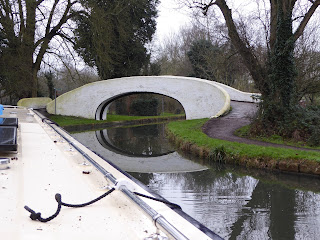 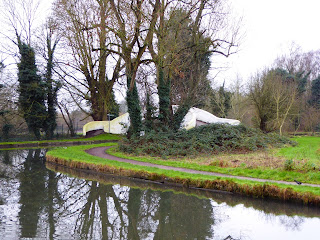 Bridge 163 the lovely turn-over bridge in a lovely setting ... 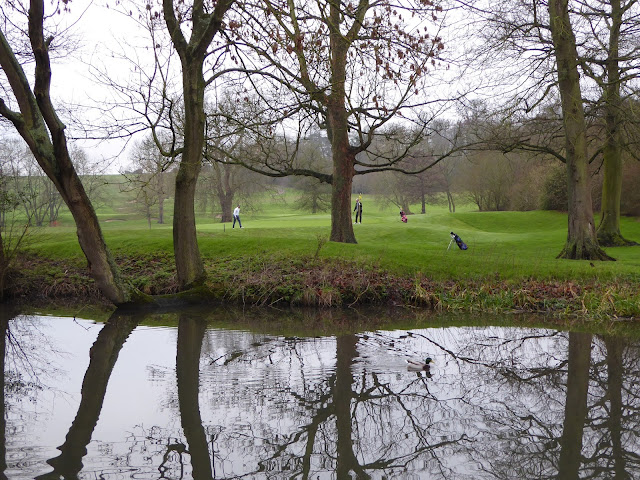 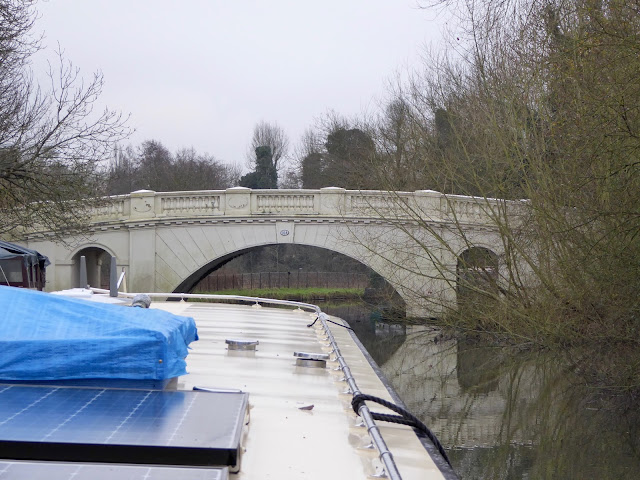 … and on the approach to the impressive Grove Bridge 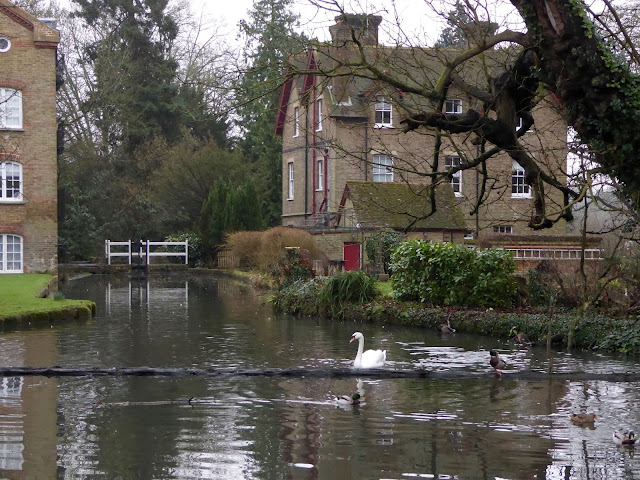 I must have at least a dozen photos of Grove Mill on this and Rock ’n’ Roll’s blog, but why break the habit … I just love this scene! 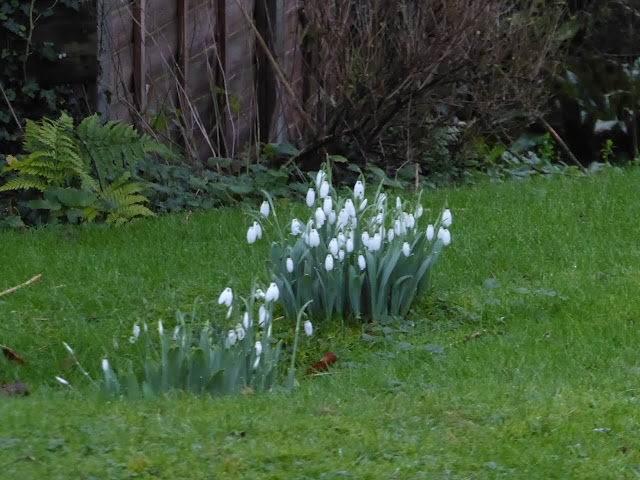 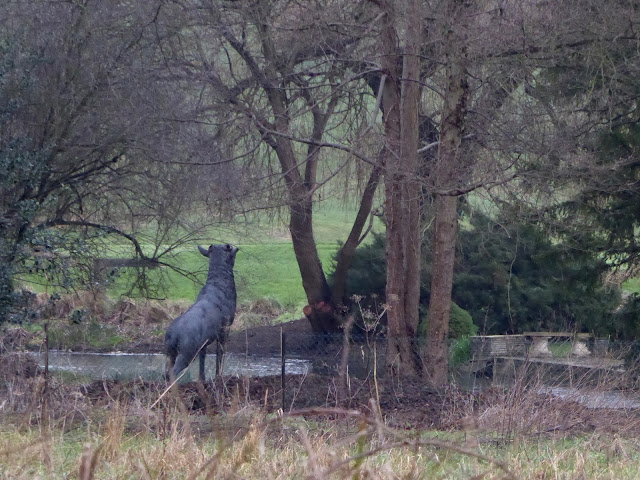 There’s always something new to see … this by Grove Mill.  He looks as if he’s yearning to be over on the grass the other side of the mill race. 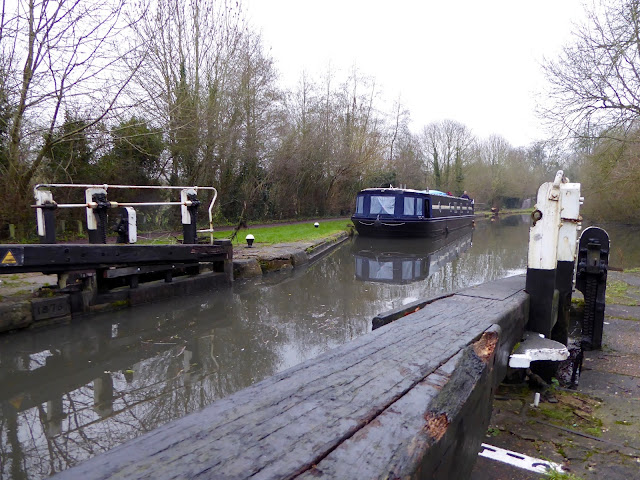 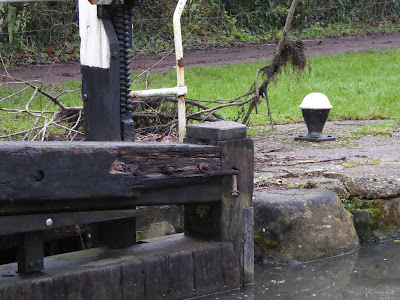 … he needs to avoid this metal bolt on the gate.  This lock is due for winter maintenance too and will be closed from 7th-9th of March. 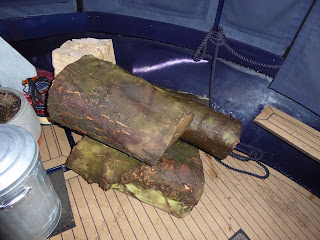 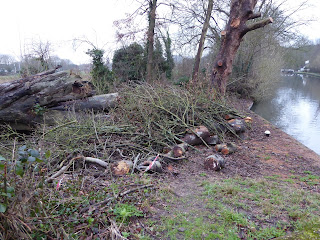 We discovered this fallen and cut-up tree below the lock after our walk through the golf course at Cassiobury in November last year.  So we were pleased to see that there was still some left as we'd taken quite a bit at that time and we know that Carolyn and Gary on nb Inca took some soon afterwards too.  George man-handled four very large heavy rounds into the front cratch until he can cut them up.

Once we’d descended Cassiobury bottom lock (gates and paddles open here too)  we pulled over and moored up.  It was after 4pm by the time we’d cleared the stern deck (wet gloves, camera, map book, Molly’s bed, mooring pins etc.) and put up the pram hood.

5 miles and 12 locks done and we’re moored just where we need to be (more on that later). It has been hard work but a very enjoyable  cruise even though all the locks except one had been against us because a thoughtless, lazy boater had left all those gates and paddles open.  I wish I knew who it was, I’d have a not very quiet work in his shell-like if I did.

Anyway once inside we enjoyed a quiet sit-down and relaxed with a hot chocolate orange, (hot drinking chocolate with  a good dollop of Cointreau in it … delicious! Our little ‘treat’ after a long day’s cruising!
Posted by Carol at 09:35

The laziness of some boaters on the southern Grand Union is a real pain. As you experienced, gates and paddles are frequently left open for others to close. This acts as a real disincentive to cruise this part of the GU, which is a real shame as there's a lot of good countryside along the way.

Never thought all that wood would still be there. Up here near Rugby if it a tree comes down its all gone in a couple of days..ps it does burn very well ...just the ticket. Gary Nb Inca

There’s still some left although they’re big and very heavy if you’re coming down this way again and yes it does burn really well too. Happy cruising.

CART are trying not to issue a paper license and insisting that the registration number is painted on the boat. You can check if it is licensed on their website.

Quite a number of the locks south of the Cowroast Summit are marked by CaRT to be left empty and, in some cases, with paddles left up. Some of these then drift open - certainly this happened to us when we cam back down at the start of November.

Yes that’s true Mike and I was well aware that was the case for a couple of locks, but not every single one of them!

In my experience there are far more than a couple! Also noted from a thread on CWDF that at least one of them is unauthorised! Also there seems to be a Phantom Notice Destroyer (I did hear that his identity is known to CaRT and is serial offender!)