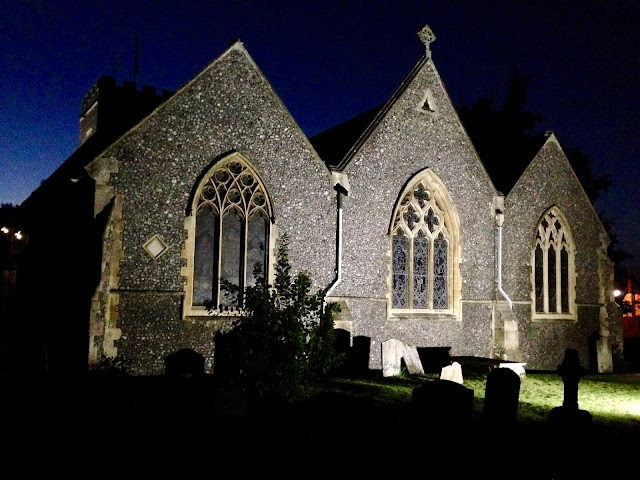 Forgot to put this picture of St Andrew's Church, Sonning on yesterday's blog as we walked back to Still Rockin' after our meal at The Bull in the dark. 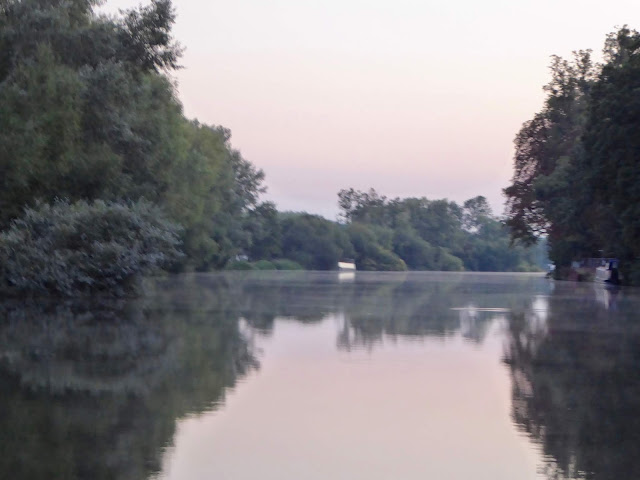 06:15 on Sunday (2nd September) at Sonning with strains of pink from the sun at present behind the trees ... 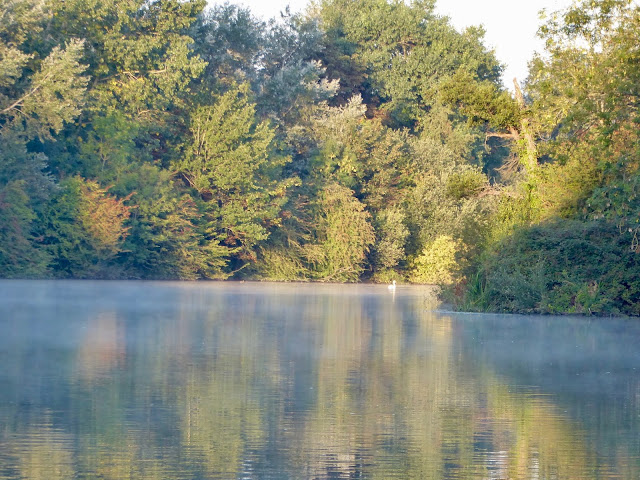 and at 7:15 when the sun hits the trees opposite the mooring 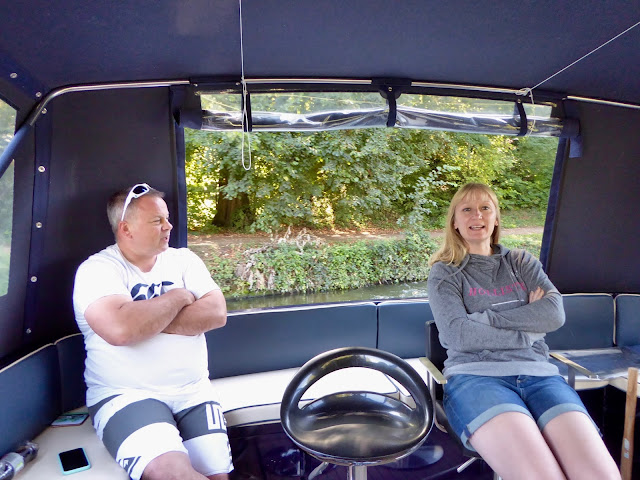 A slow start this morning and after a cooked breakfast we're ready to cast off just before 11.  George reckons he can get round in one, Kenny is not so sure and is watching how it's done ... and done in one it was! 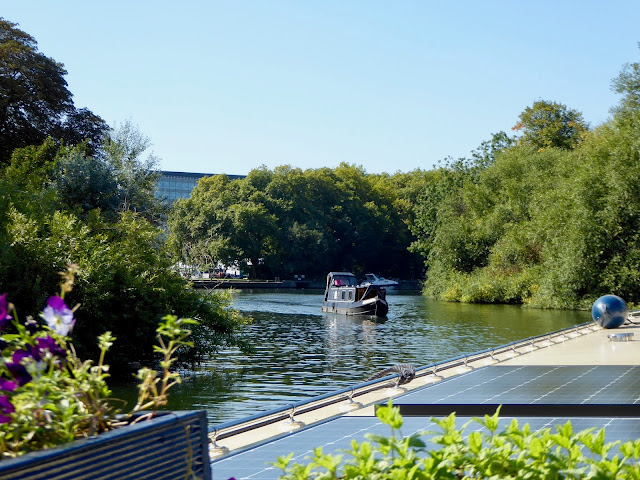 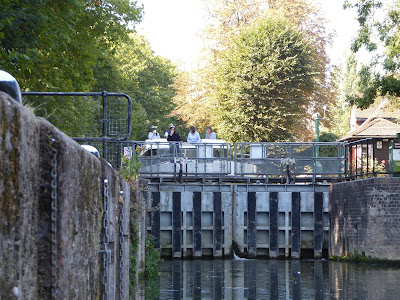 We're waiting by the wall for the lock to ready and I watched this Le Boat hire boat coming into the lock fast ... I really thought it would hit the gates! 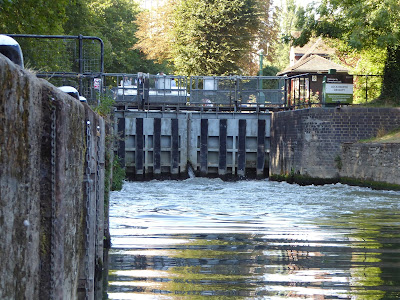 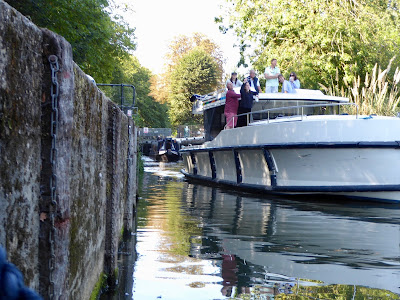 and the boats exit the lock 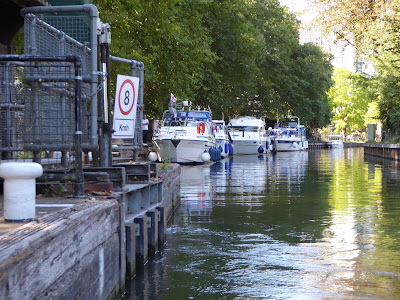 Once we had ascended the lock, the gates have opened and there are yet more boats waiting ... it's going to be a busy day on the river. 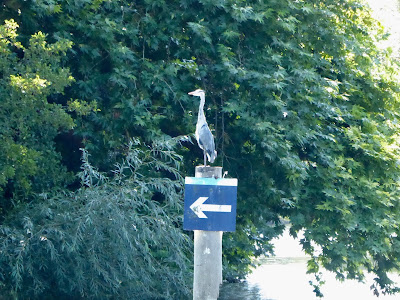 We're actually travelling the 'other' way 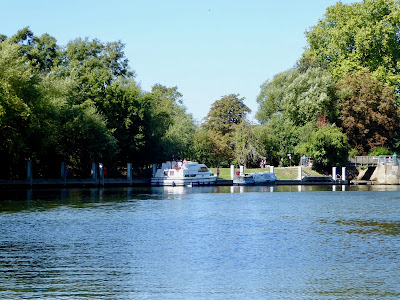 Mapledurham Lock next and another queue ... the narrowboat enters first ... 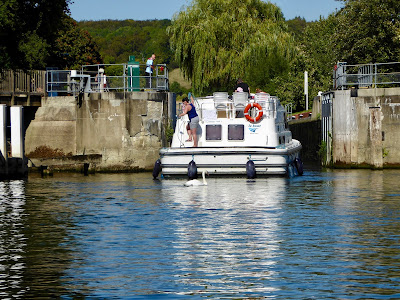 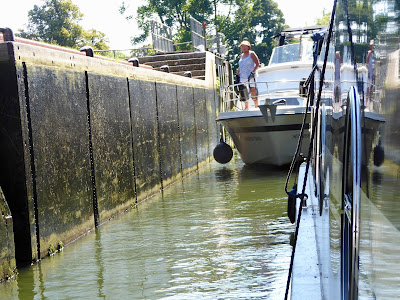 and another cruiser come in behind us 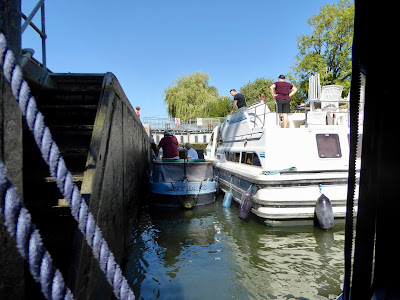 it's a bit cosy with the four boats inside! 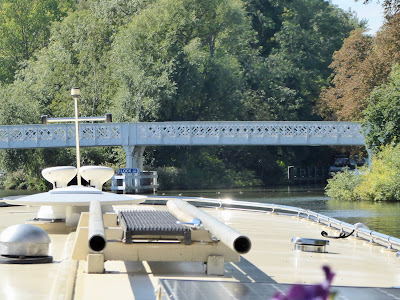 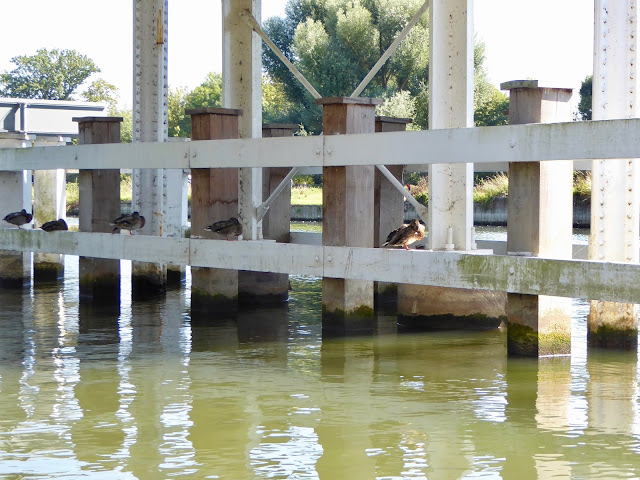 Ducks in the sunshine!
Whitchurch Lock was on self service so I went up to help ... and got a lovely surprise ... 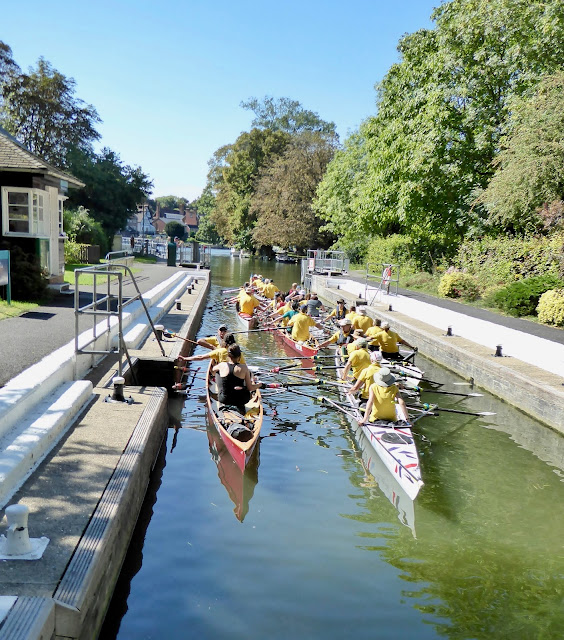 7 x Sculls I think they're called with 4 crew and a cox coming to a halt in a lose herringbone pattern ... 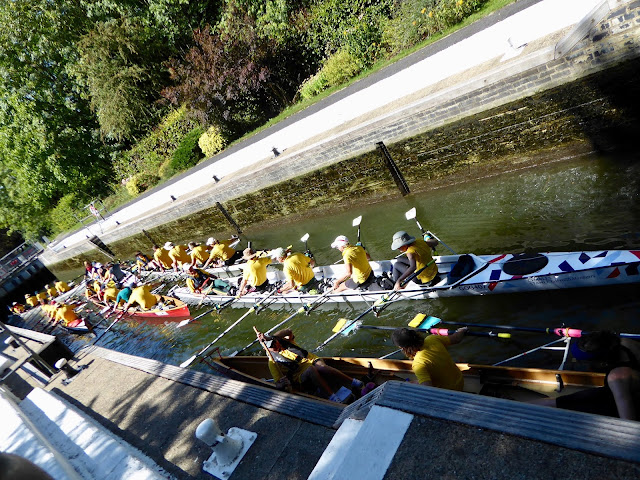 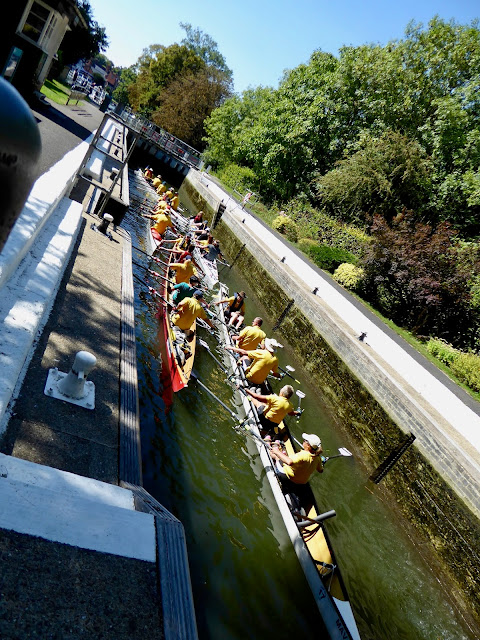 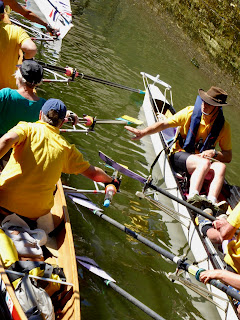 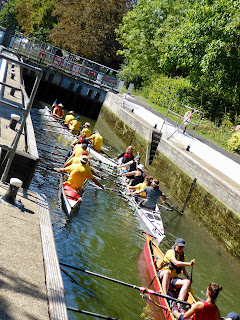 It was fun to watch them trying to unravel the inner oars when it was their turn to exit the lock! 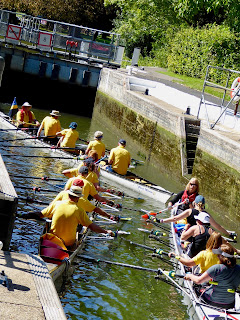 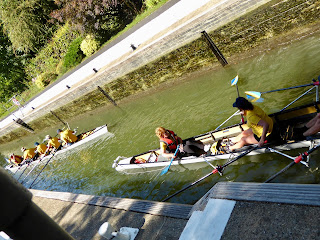 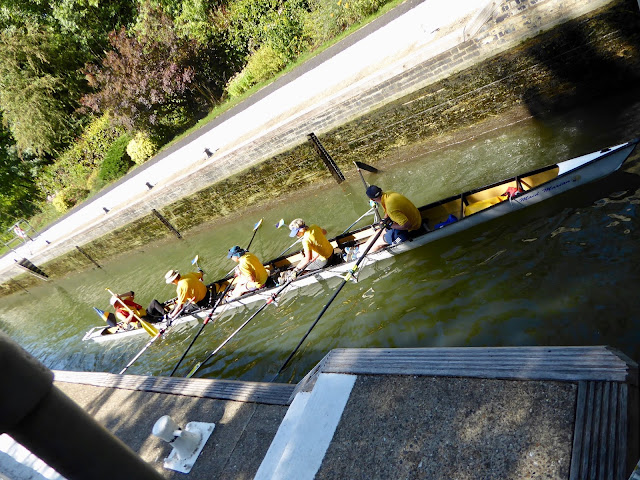 Last scull to leave the lock ... 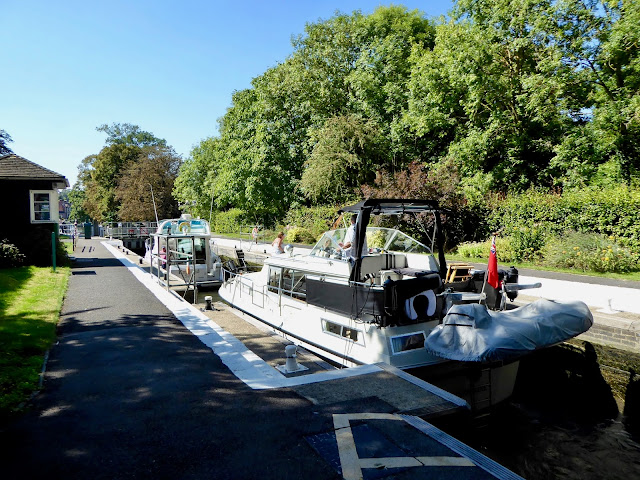 and I bring two cruisers up ... 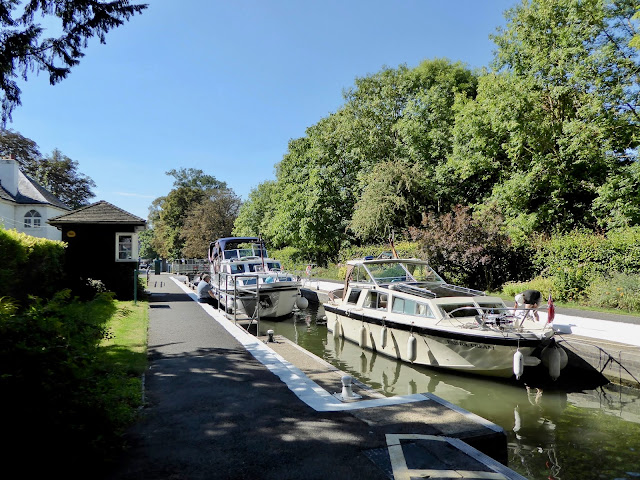 and take two cruisers and two day boats down 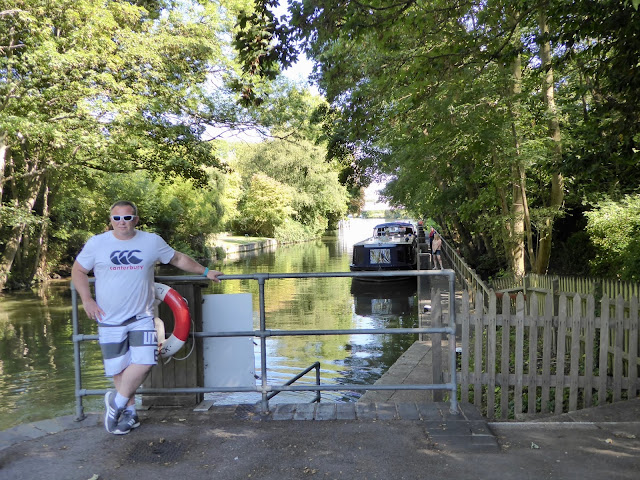 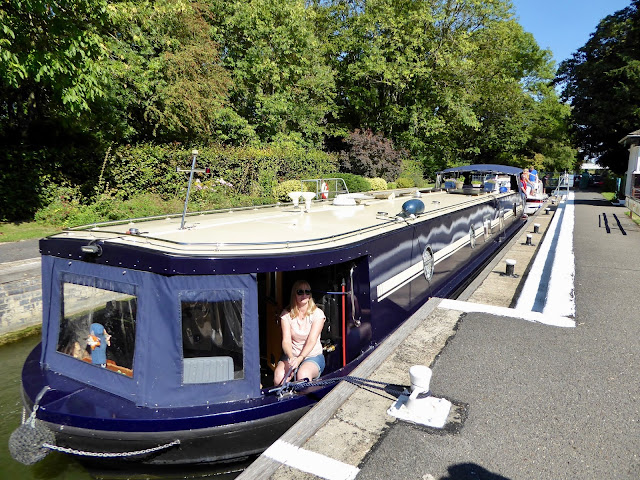 Jude has taken my position at the bow to bring Still Rockin' up the lock.

Only about half an hour to Beale Park where we started.  George's sister Diane and hubby Paul were coming to collect Jude and Kenny but unfortunately the car park closes at 6 and that would be too soon.  I've got dinner for 6 to prepare and there's no way we'll have finished eating by then.  We dropped of Kenny and Jude to meet up with Di and Paul while we cruised north closer to the alternative car parking space but couldn't find one.  We turned around and went back to the original and it had gone!  Back upstream again we managed to get the stern in with a long rope on the front and the plank in position we managed to get everyone onboard and dinner was eventually served.  Lovely pot roast beef with all the trimmings and a summer pudding to follow.

Just as everyone was getting ready to leave Di noticed a barn owl flying low over the meadow and after everyone had left, the dishwasher had been loaded and the pots washed we sat outside and waited ... 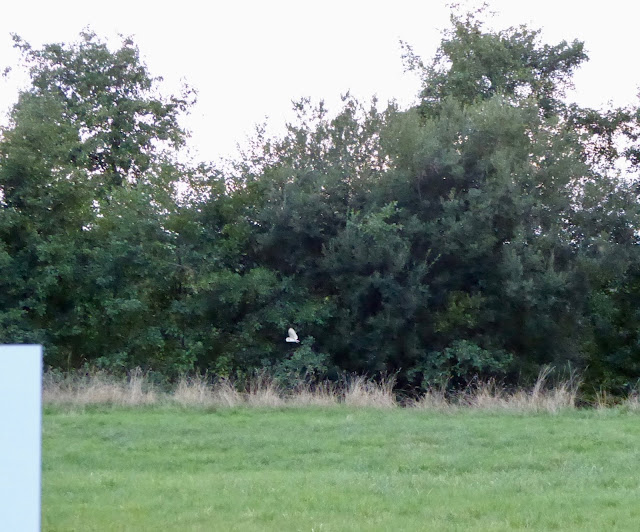 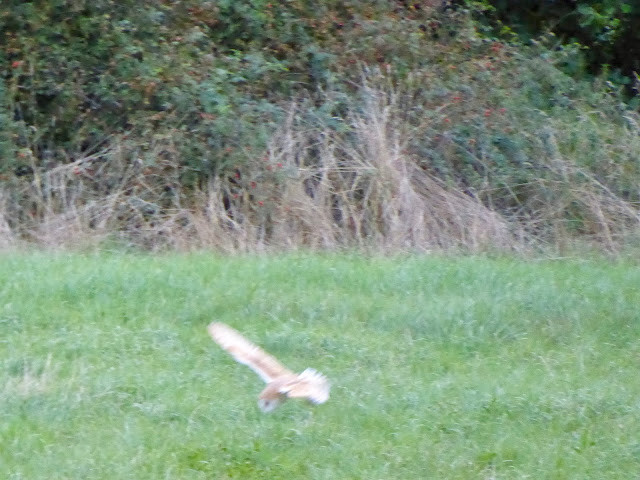 not a brilliant photo but so good to see him.

Well, what a fun weekend we've had with lovely family.
Posted by Carol at 21:09

A lovely weekend indeed, Carol! It looks glorious and the Thames scenery is really stunning!

Can't beat time with family Val as I'm sure you know! I love the Thames especially at this time of year when the light is changing.