Time to move on! 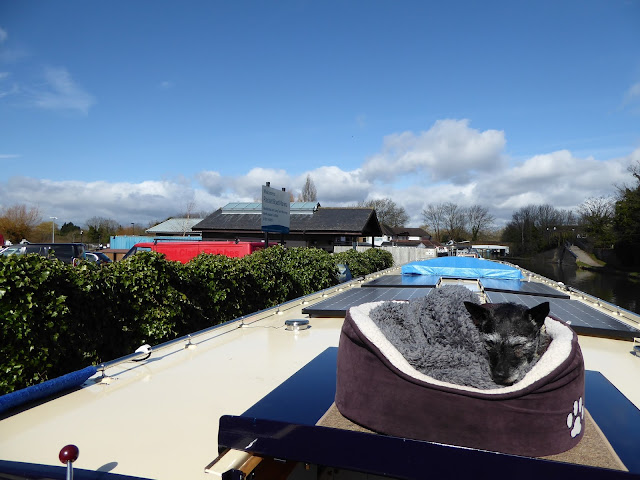 A glorious but a bit chilly morning yesterday as we reversed to the sanitary station to do the necessary and then continued our current journey northwards.

Chide - I stepped off Still Rockin’ at the bridge to walk up and ready Cowley Lock and noticed that the widebeam which was moored above us had gone; will he be in the lock I wondered.  Yes he was and I could tell he was ready to exit as the water was cascading over the bottom gates.  It was then that I saw that he was going to leave the top gates open too.

I hastened up the lock bank and called out to him at the top of my voice - Oy (not how it’s spelled but you get my drift!) 'Oy, you on that widebeam’  they (two  guys in their late 20’s) eventually heard me and turned around - ‘What’s with leaving these gates open, too lazy to close them?  Leaving them for some other b…er to close?’  They put their boat in hard reverse and jumped off at the wharf exclaiming that they were ‘sorry we didn’t realise’ (not sure what they didn’t realise) and went on to say that they were going to pull over and come and close them.  Of course I believed them (not)! I pointed out to them that if their boat had been single handed I wouldn’t have said anything but being as there were 3 onboard they had no excuse whatsoever to leave gates open.

I stood by while one went round the other side of the lock and they closed the top gates.  I warned the chap on my side of the lock that  we would be following them today and that I would not expect to see any gates left open. He then noticed that their own boat was still in gear and he had to run back to it shouting to the 3rd member of his crew to use the tiller!

I used my windlass to close the paddle and pointed out to the bloke on the other side that he hadn’t come prepared and had no windlass with him.  He came over the gate to borrow mine and started to open the paddle I’d just closed! I pointed out his error and he closed the paddle, recrossed the gate to close the other one and was just about to come back when ‘suggested’ that he opened the bottom gate paddle and crossed over those gates, which he did.  I reiterated to him that we would be following them and that there would be trouble if we found any gates left open behind them.

Chuckles - A few minutes later whilst watching them struggle through the bridge hole because the manoeuvre was tight I remembered that we weren’t going through any more locks and had more than a few little chuckles.  But I think they ‘got the message loud and clear!' 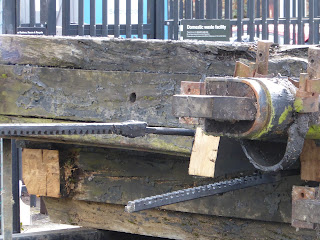 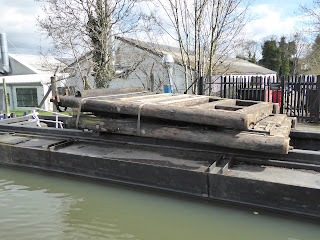 Old lock gates outside C&RT’s depot just above the lock, the rotten beam can be clearly seen. 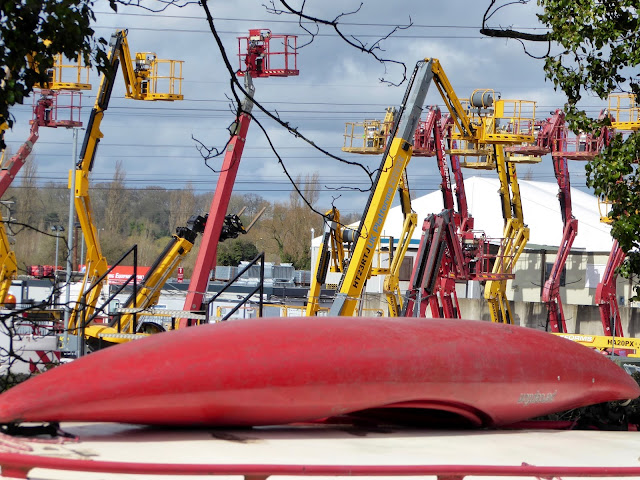 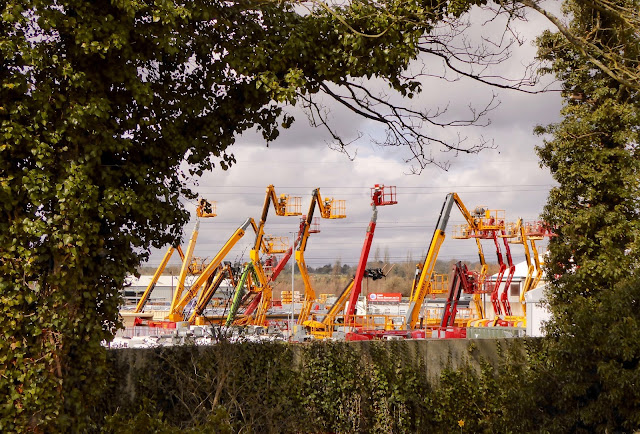 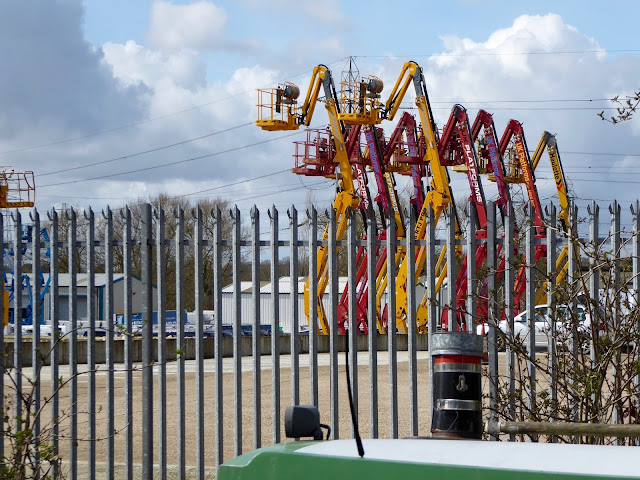 … are cherry pickers!
I just loved the colours and lines in the bright sunshine. 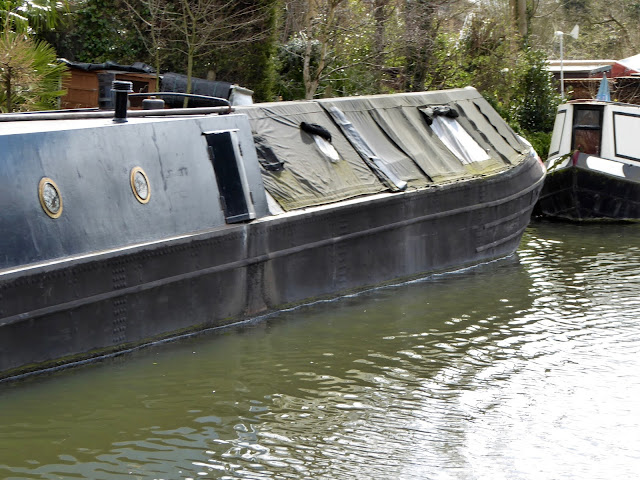 Seen on the long term moorings was ex-working boat Hawkesbury built for Grand Union Canal Carriers by Harland and Wolff in 1937 and sold into private hands in 1970. It has a Lister JP3 engine. 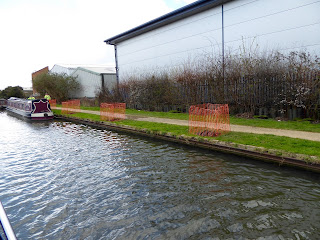 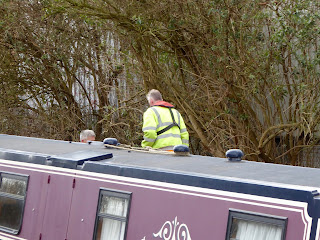 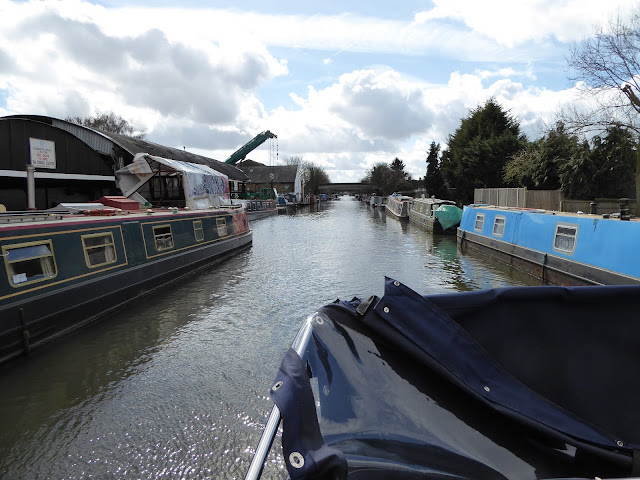 Uxbridge Boat Centre on the left above, where we shall be in the dry dock in April to re-black Still Rockin’s bottom.  Every time we pass I wonder how we’ll turn into the dock with these long term boats moored opposite.  I may ring them to assure me that it will be possible. 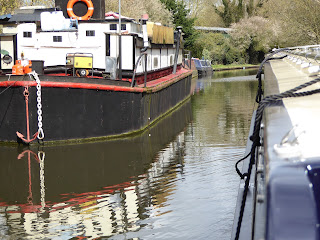 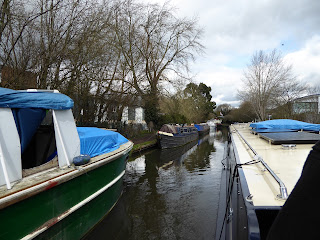 Due to long lines of long term moorers and visitor moorings on both sides of the canal here the journey is very, very slow but we eventually reached our destination just south of Denham Marina.  I have some wash loads to catch up on and then we’ll fill with diesel at the marina, top-up the water tank and continue north.
Posted by Carol at 08:51

Thanks for that Carol... I'll make a note never to get on the wrong side of you! LOL

Hi you two. Have you seen our boat now called 'Morning Mist' ? Dave Willingham got it now and is currently on the Grand Union intending to head for the Thames. He could do with some good advice.

Not seen the boat so far Chas but will look out for it as we cruise. Best wishes to you both.