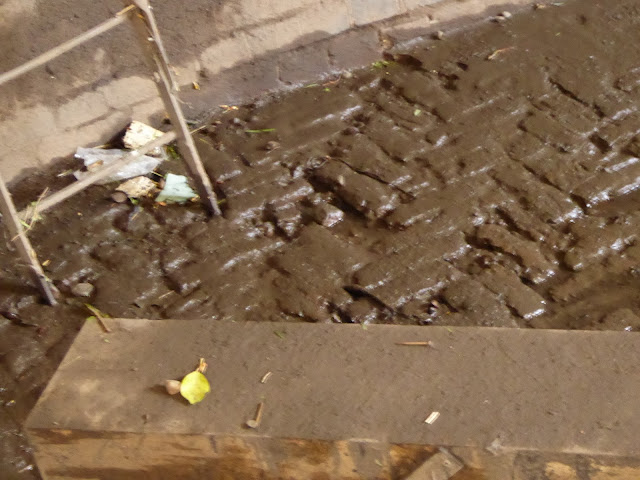 I noticed these old bricks in part of the dry dock here at Uxbridge Boat Centre whilst we’re here blacking the hull of Still Rockin’; they're laid in a herringbone pattern and I reckon that they are original so I thought I’d do a bit of research into the boatyard.

It apparently was a Fellows Morton and Clayton boatyard and wooden boats and butties were built at Uxbridge from 1896 until 1948 when the company was taken over by the British Transport Commission.

Up to 1912, 40 Town class boats had been constructed here and in 1922 Uxbridge started to build 27 butties which were named after girls, the last one being ‘Joan’ in1933; she was the last butty to be built by FMC.  For more FMC history click here.

The yard was left derelict for a number of years before being taken over by Uxbridge Marine for a few years before going into liquidation.  In 1976 the present owner Alan Boswell took over and  the business was mainly repairs to wooden boats, but as time passed the majority of todays business has become nearly all steel boats.  For more information by Jim Shead on Uxbridge Boat Centre Limited, click here 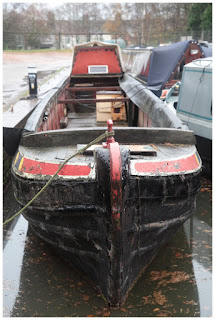 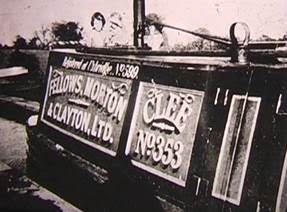 Clee built in 1947 at a cost of £972 was eventually abandoned and sunk in one of the flashes at Anderton from where it was raised in 1983 to continue working on the Oxford Canal.  Clee is once again underwater at Alvecote Marina where there are hopes that she could once again be restored.  The above photographs and the excerpt below about life on Clee, plus more information, is available here.

"According to health survey records, in 1948 Ethel and Mary Meredith, aged 10 and 3 at the time, lived on Clee with their parents John Henry Meredith (b. 1912) and Sarah Meredith (Nee Rowley (b.1918). Usually health records only give the number of resident children but Ethel and Mary were named because at the time they were suffering from scarlet fever. Both Ethel and Mary now live in Loughborough”  Ethel and Mary are standing on the deck of Clee in the old photo above.

For the past two years whilst cruising the Grand Union Canal during the colder months of the year we’ve used Uxbridge boat centre many times.  It’s always busy boats being craned out for repairs/blacking etc., and although the frontage isn’t very large it’s always possible to come alongside for diesel, gas and coal, the staff are always helpful and the chandlery is well stocked.

… and what have we done today? 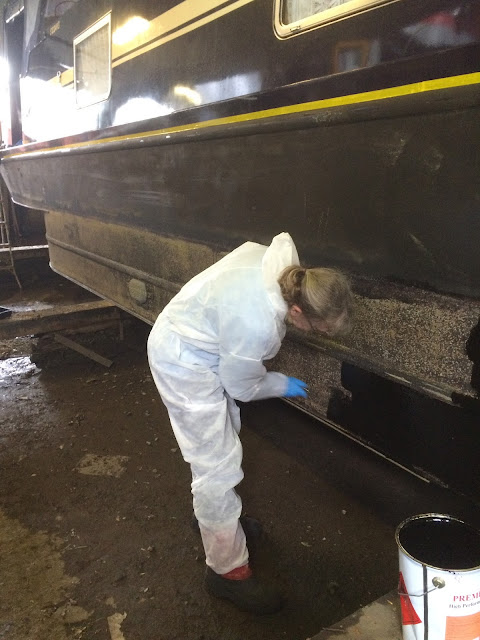 Well I’ve been busy!
George has been busy too doing the parts that I can’t reach - where the hull meets the gunwale and under the swim (the back of the boat in the picture which overhangs the propellor and rudder).  That’s the first coat on and I’ll do four coats altogether.  A good day.
Posted by Carol at 06:11

Love the white overalls when blacking, Carol! At least you know when you are making a mess ...
Mxox

Hi Carol
Looks like you are doing a great job blacking, smelly though it is.
I have a question and excuse me posting it as a comment on the blog.
As we cruised away from you the other day we realised that Still Rockin's blue is or very nearly is the colour that we are wanting for NB Oleanna. Can I ask if you know what colour it is and what brand please?
Our shell is about to move inside to be painted, all very exciting, but we are having difficulty in finding a proper reference for the colour. So any information you have on the colour would be great.
Happy Blacking
Pip NB Lillyanne
pip@leckenby.me.uk

Just wish they were a bit warmer Marilyn. xx

Hi Pip, Still Rockin’ is Midnight Blue (as Rock n Roll was too). The make is Symphony Narrowboat Paint.