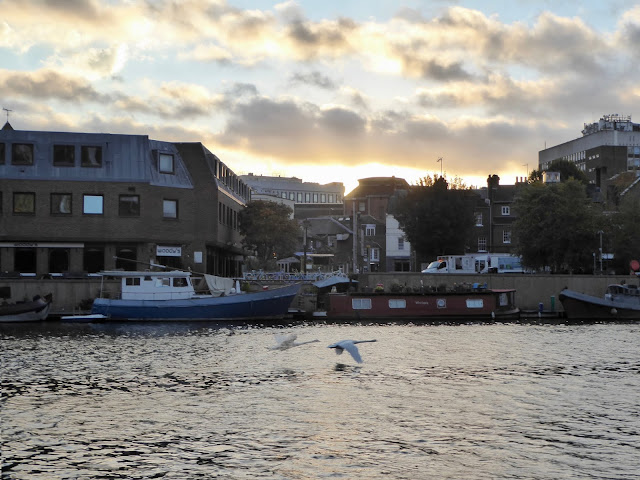 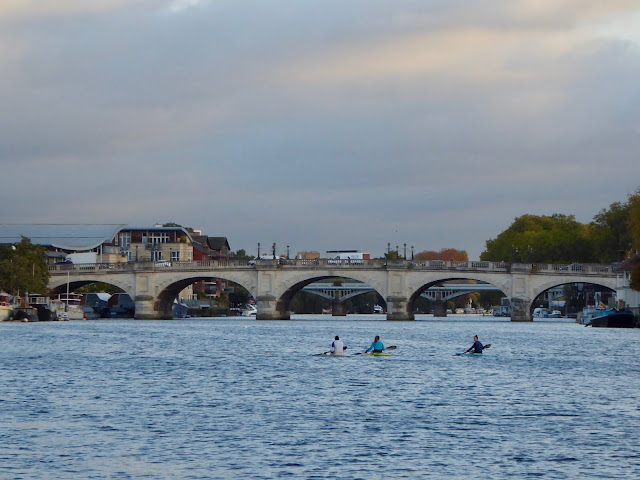 as we leave Kingston-on-Thames. 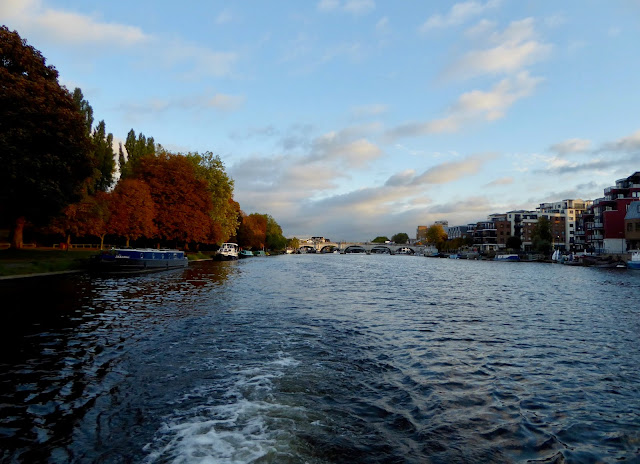 Kingston is the furthest we're cruising towards the Tidal Thames and London.
We're now starting our cruise upstream, heading home for the winter 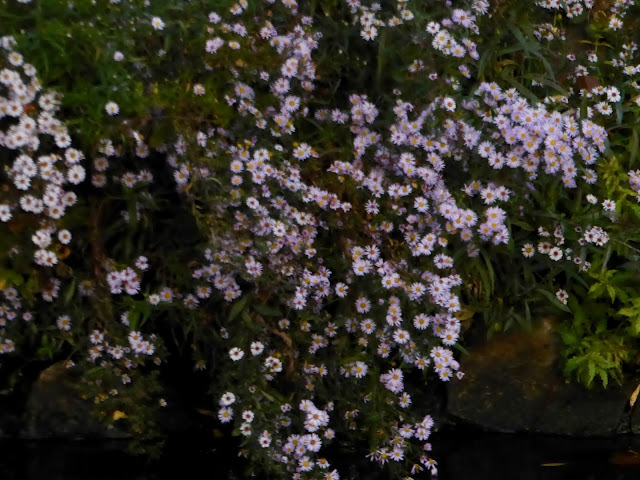 Dad always has Michaelmas Daisies in the garden ... lovely colour at this time of year, but here growing wild on the riverside. 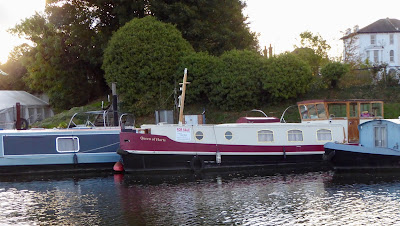 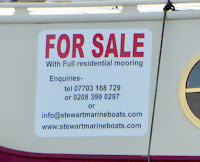 Unusual to see a residential mooring available on the Thames ... but you'll have to buy the boat to get it! 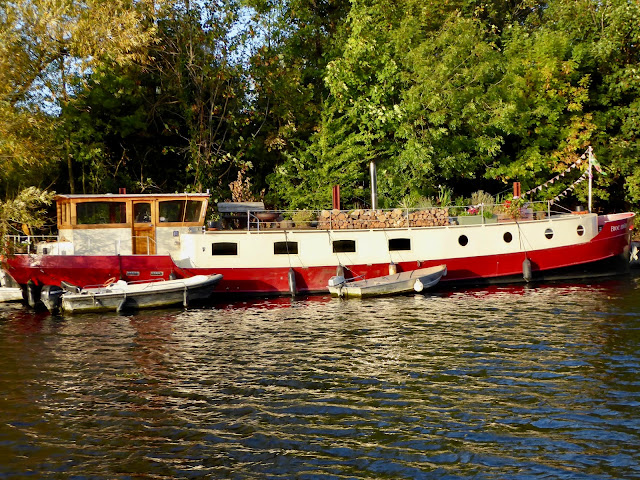 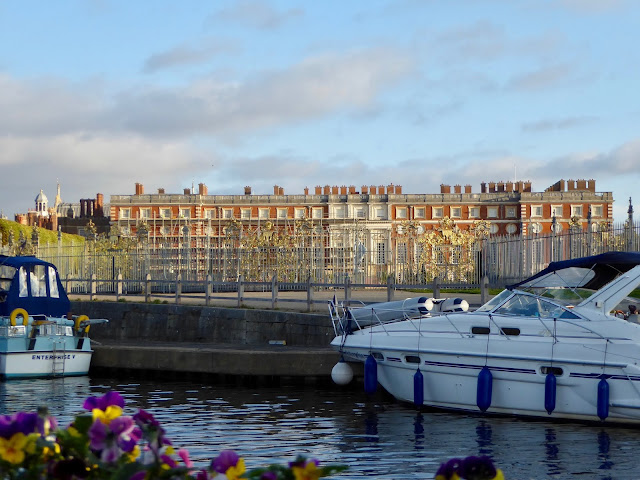 Cheerio to Hampton Court ... see you next year! 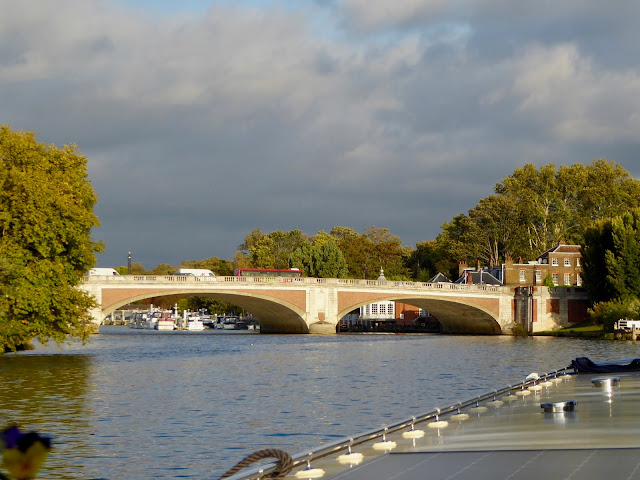 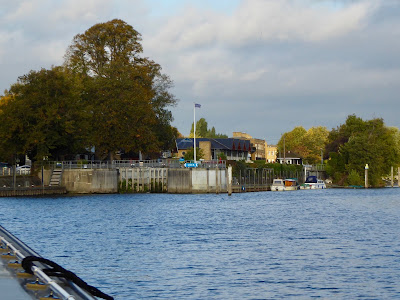 Approaching Moseley Bridge and lock and my good deed for the day ...
The lock was on self service so George pulled over to the landing to let me get off to operate the lock and as we moored up could see an empty green 'pop-up' tent by the path and I wondered what poor soul had to sleep in that last night.  As I stood at the lock's control panel I looked back down over the tail gates to see George with the tent in his arms; the wind had blown it from its position and I watched him wedge it between some bushes and a post and return to Still Rockin' as I was ready to open the gates.  As he was bringing the boat into the lock I noticed that some walkers were now struggling with the tent (it must have come free again) and they were attempting to fold it up unsuccessfully and left it.  Moseley Lock is on a very busy road and I was very concerned that the tent would be caught by the wind and either blown into the traffic possibly causing an accident or into the river where it could wrap around a boats propellor and cause serious damage.  What to do?
The lock cafe over the road was being prepared for the day so once George was in the lock I closed the gates and sluices, set the top sluices to open and walked over to the chap at the cafe and explained about the tent and the problems it may cause; he said that he'd go down and sort it right away.  He returned empty handed so I'm assuming that he managed to fold it up and leave it in situ for the owner/sleeper to come back to later ... well that's what I hope happened anyway.
Meanwhile I had been so concerned about that tent that I forgot I needed to tie up the bow of Still Rockin' to prevent the boat from swinging about in the lock as it fills and I'd opened the sluices without letting George know what I was going to do.  Thank goodness for his quick thinking and a decent bow-thruster all was well! 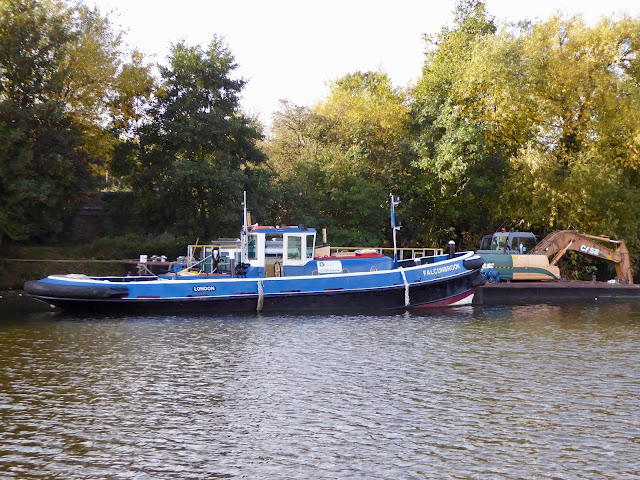 As we passed Platts Eyot we could see the EA boat that was in-charge of the removal of wrecks on this reach ... link here ... 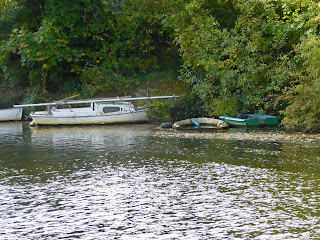 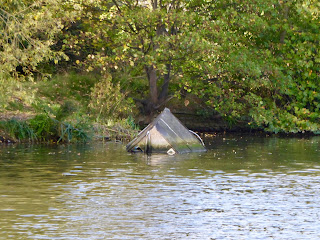 but did notice a couple as we cruised upstream that were still in the water. 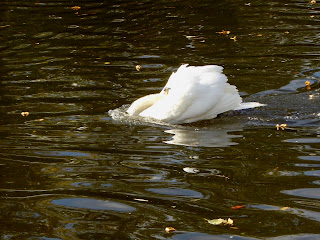 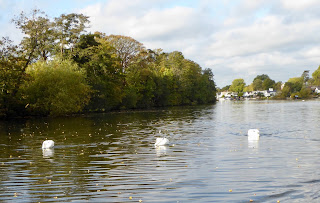 The young adult swans have lots of testosterone just now! 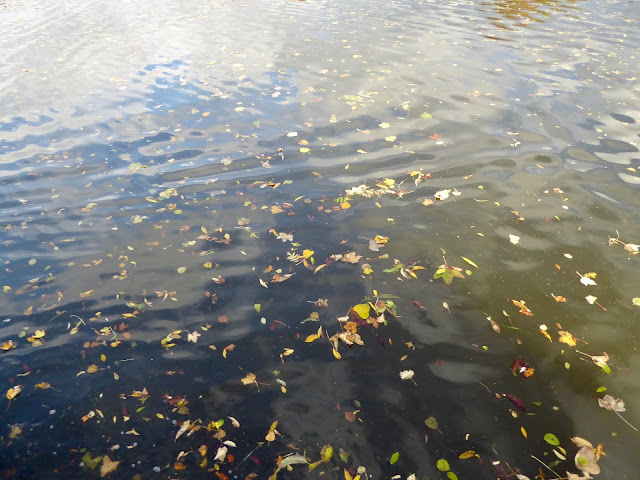 And there's lot of leaves too causing George to keep 'kicking back' to clear the propellor. 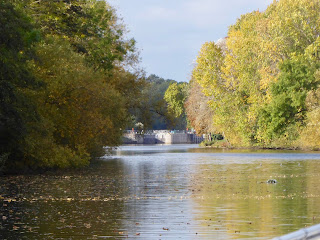 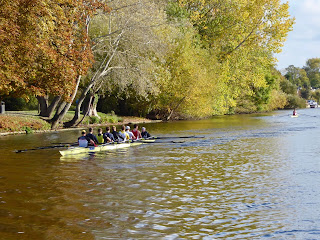 As we approach Sunbury Lock there are lots of rowers about and we slow down to tick over while they decide if they will turn in front of us or wait until we've moved across the river to the lock, they waited. 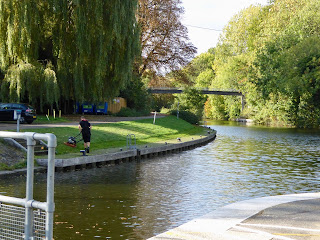 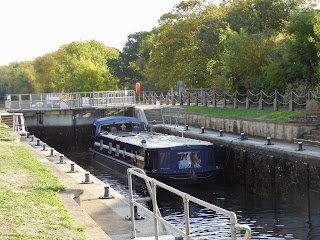 Although the lock was on self-service the keeper was there and asked if I was ok to do the lock as he needed to get the grass cut before the forecasted rain started around lunch time.  I told him I was ok with that and asked him if the salvagers were finished. He told me that they hadn't finished, that the grabber had sprung an oil leak and that work would continue when the leak was fixed.  I saw that evening on BBC South news a video of some of the wrecks being removed ... a good job done. 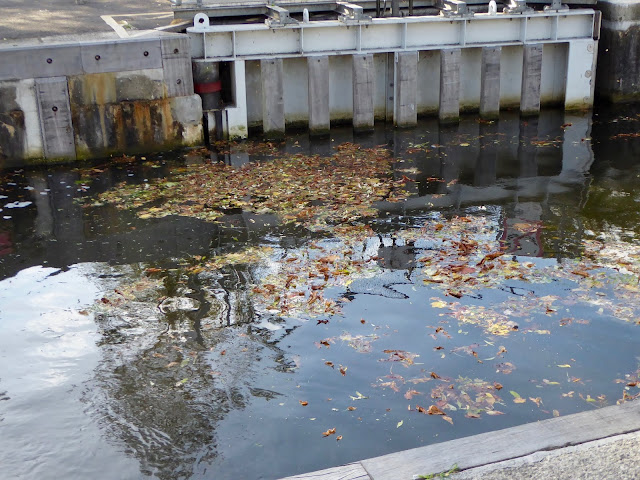 Leaves collected outside the top gates ready to catch our prop! 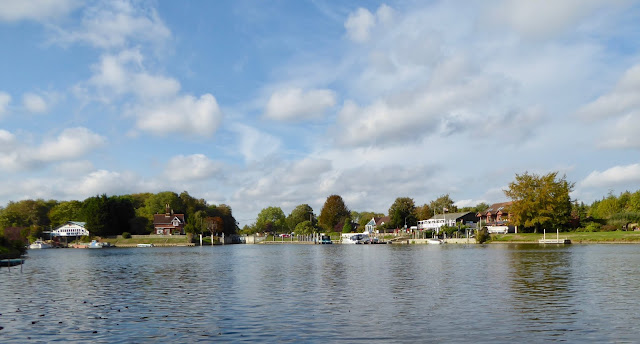 Coming out of the cut on approach to Shepperton Lock ... a lovely scene. 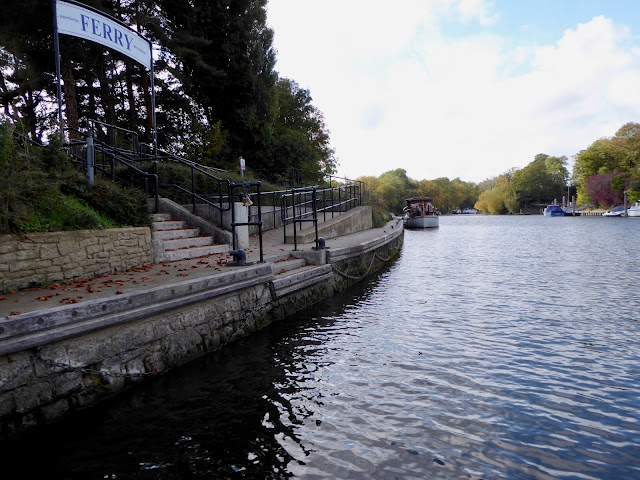 We turn to our left and find a mooring just past the Ferry Stop at Weybridge.
As soon as we'd made the boat safe we walked into Weybridge to Morrisons for some fresh produce and got home a few minutes before the heavens opened!
Posted by Carol at 14:37

A lovely post with beautiful photos. Just out of curiosity, Carol. Do you ever cruise on any of the canals? Or do you stay on the Thames? I just wondered how far you normally travel in a year?

We don't usually do the canals in Still Rockin' now. In our first year (2014) on the Thames we didn't take a winter mooring so went back onto the Grand Union for the colder months and then went into London (canal) and back to the Thames. In 2015 we did the River Way in Still Rockin' but since we took a mooring at Hambleden (this will be our 3rd winter there) we've stuck to the just the Thames.

We did most of the canals (size permitting) in our narrowboat Rock 'n' Roll and we still miss them and lots of friends who are still cruising them but for now we're happy to stick to the Thames. I also get the feeling that boaters on the canals are becoming more 'precious' (if that's the right word) and are not very welcoming to wider beamed boats.

This year we've fared from Hambleden to Kingston, Kingston to Iffley and back to Kingston and are now of course heading back to Hambleden. Mileage then this year will be approximately 300 miles and 100 locks - just on the Thames!

Wow, that’s quite sime mileage you can do on the Thames, isn’t it? I can imagine you miss the canals now and then, but they seem to be very busy these days, so maybe you’re better off where you are! Thanks for the explanation! I love following your travels and would love to do the Thames one of these days!