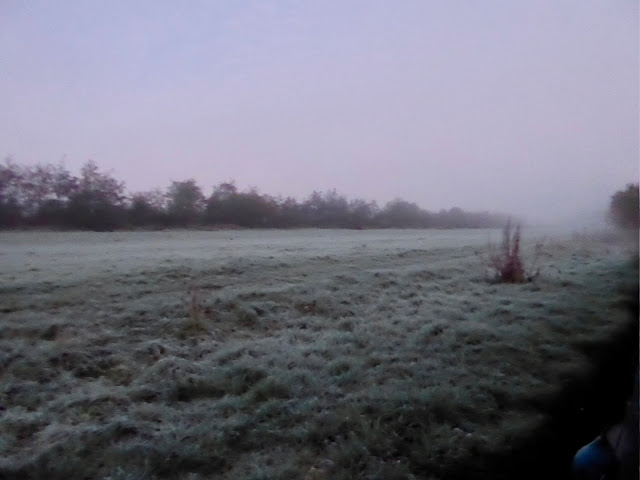 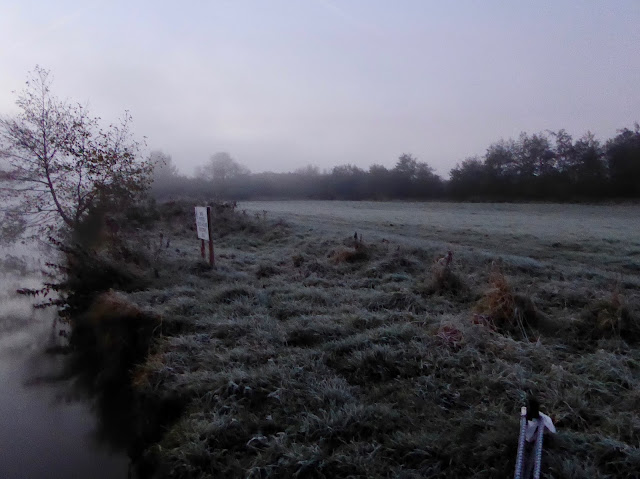 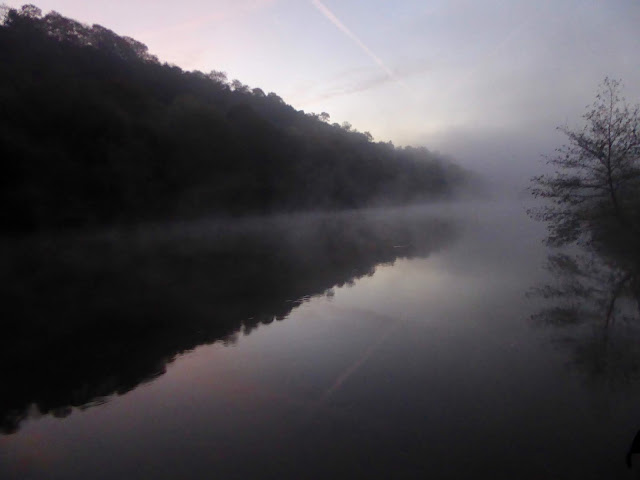 and mist rising from the river.

We spent a quiet morning.  I did some washing which I dried inside against the fire as the murk didn't really clear much all day whilst George topped up the batteries with distilled water and did other 'engine related tasks'. 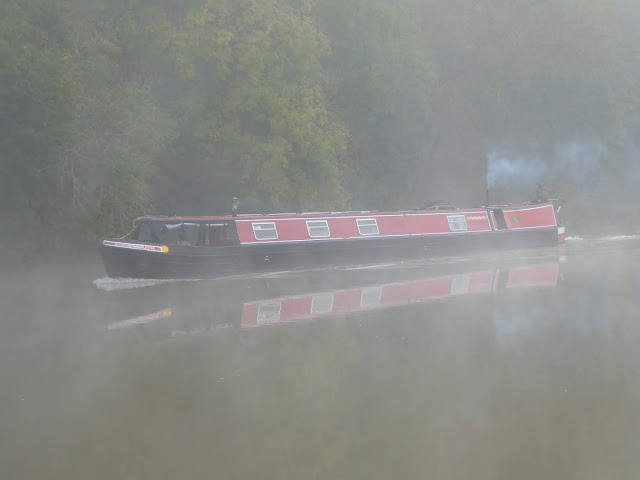 We could hear the chug of an old engine long before we saw nb Bournemouth in the mist coming upstream on red boards although here at Beale Park the river looks fairly calm at the moment.

This wasn't the only boat out and about on this reach ... Whitchurch lock must be on self service as I'm sure that if that were not the case the lockie would not allow them through ... but could he actually prevent them from traveling? 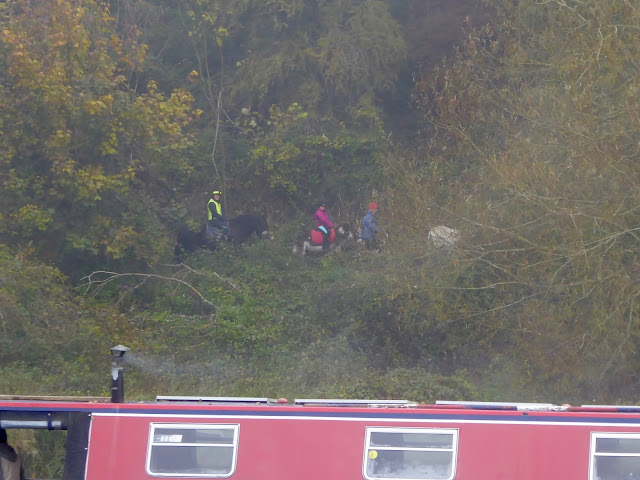 Over on the other side of the Thames I glimpsed these riders on what appears to be donkeys??

George and I discussed the matter endlessly ... weighing up all the pros and cons ...


As I've mentioned in previous posts, we need to be in Hambleden no later than Sunday because Hambleden Lock closes on the 4th November until mid-December.  It's a real dilemma. 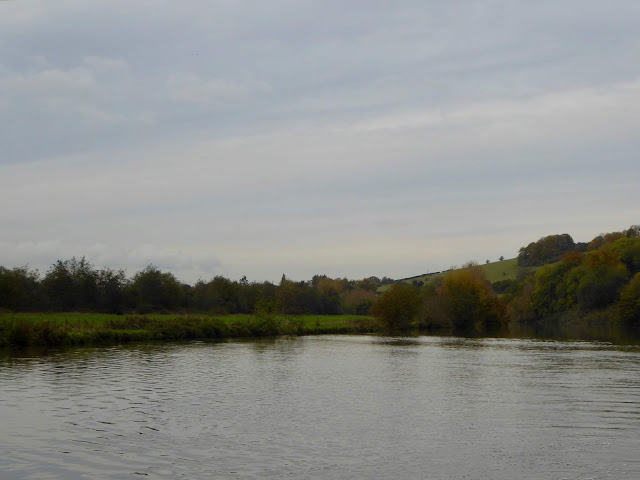 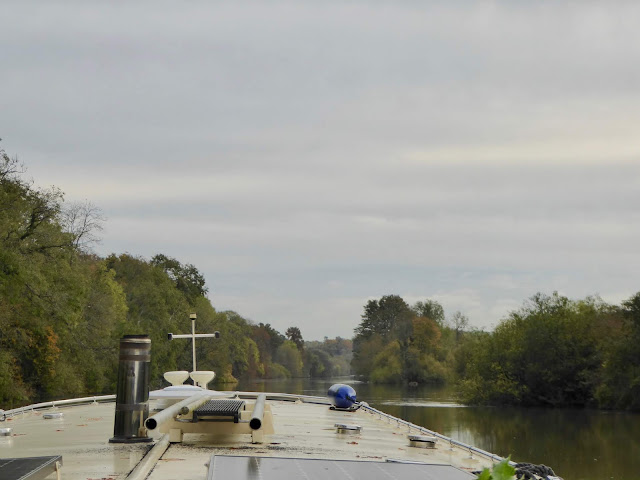 Although the flow is 'fresh' it was manageable 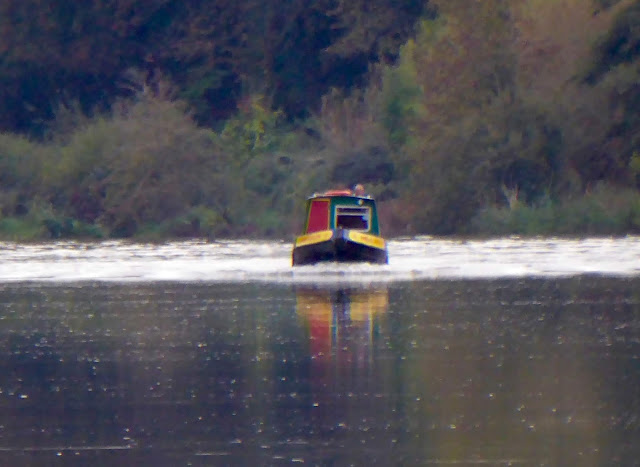 A hire boat coming upstream ... I wonder if the hirer knows anything about 'red boards'? 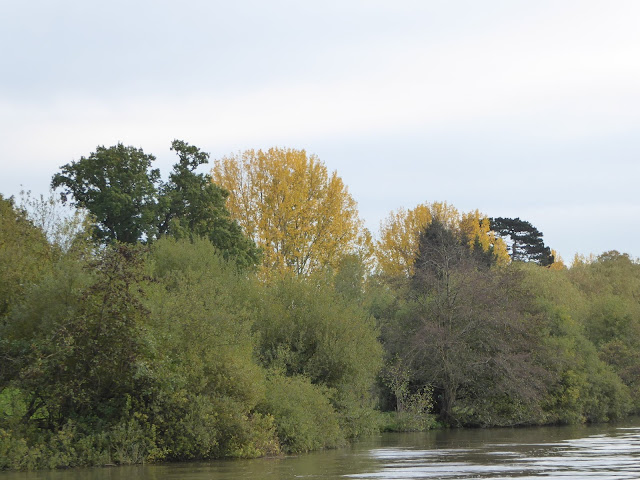 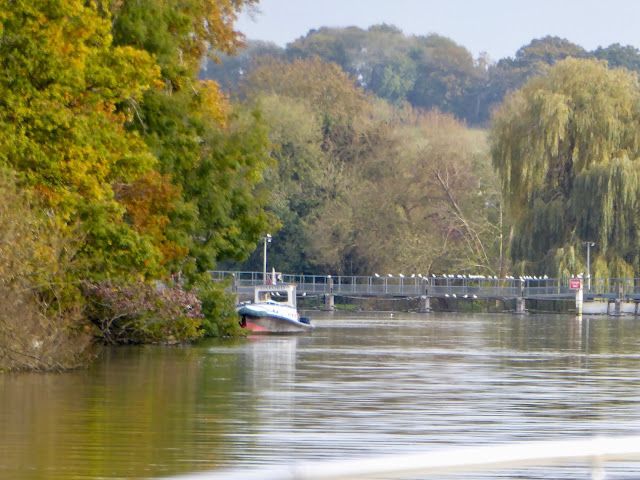 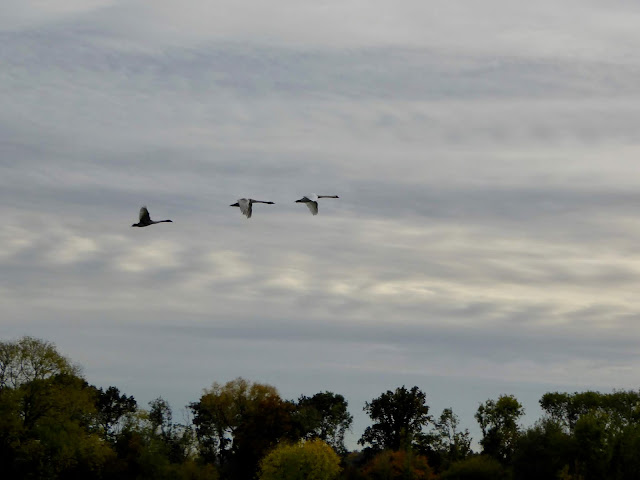 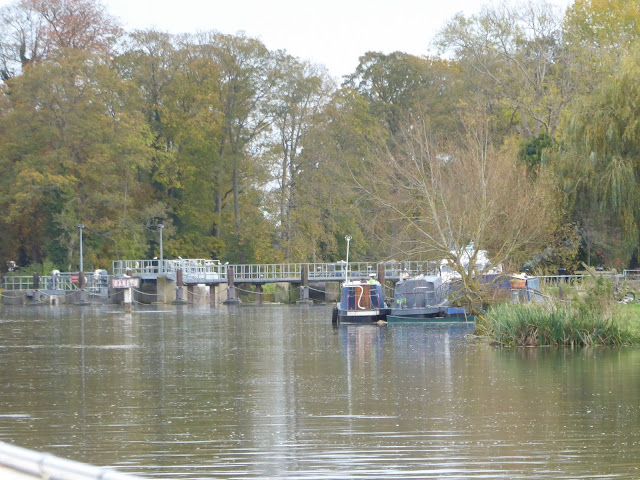 We continued to Mapledurham Lock, the weir is ahead and the lock is the other side of the moored boats and although the signage informed that the lock was on self service, there was a lock keeper on duty and a boat coming up the lock (another hire boat).

I had a word with the lockie about the river conditions.  He told me that all the reaches above Whitchurch were now on red but so far the reach below was still on stream increasing and that he was okay with us continuing but we must stop at Caversham (Reading) as the following reach was on red.  He warned that there would be a 'kick from the weir from our left as we left the lock so take that into consideration'. 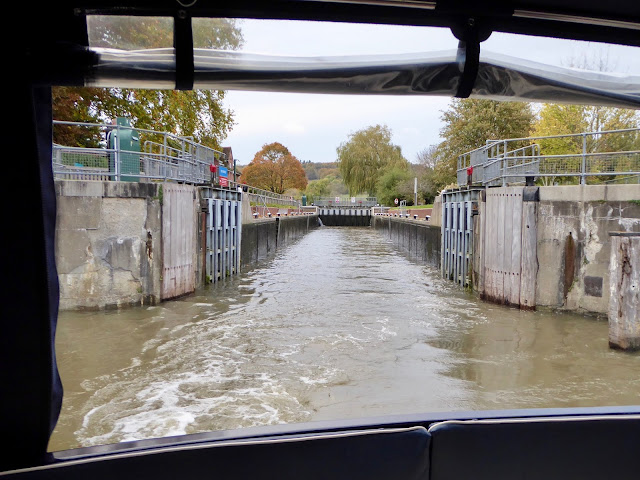 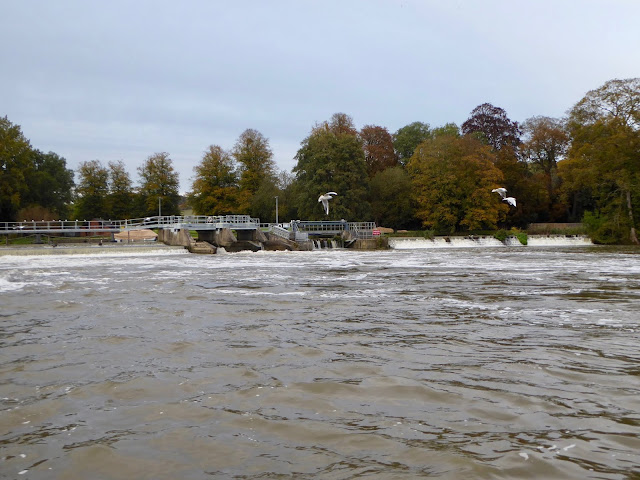 the flow from the weirs was fierce!... 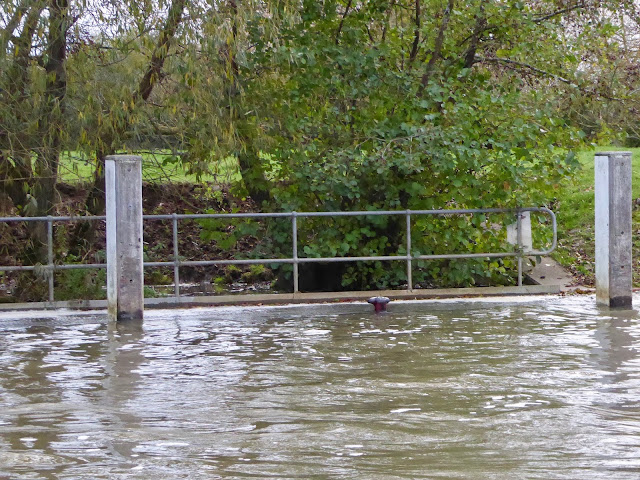 and the tail lock landing was already flooded.

George expertly steered through the weir water and we were on our way ... 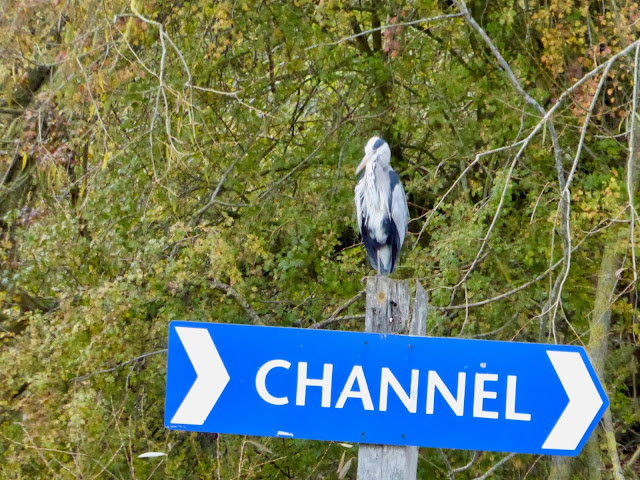 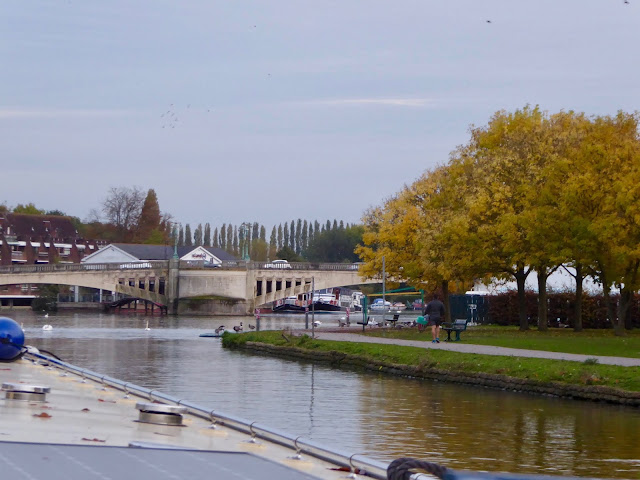 Coming into Reading and Caversham Bridge.

We need coal and diesel but would need to turn Still Rockin' to enable us to pull into the wharf of Cavendish Boats facing upstream, so we went round the island and pulled in.  Once the tank was full and with three bags of coal in bow, we again went round the island, winded again to moor alongside the park just after 5pm!

Of course this could have all gone wrong ... we shouldn't have been cruising on red boards ... but we'd thought about if carefully beforehand ... and this time it was alright ... we were lucky. 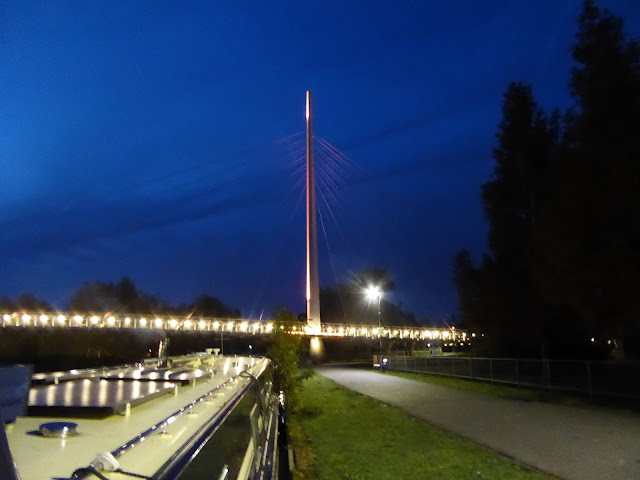 The pedestrian and cyclist bridge over the Thames 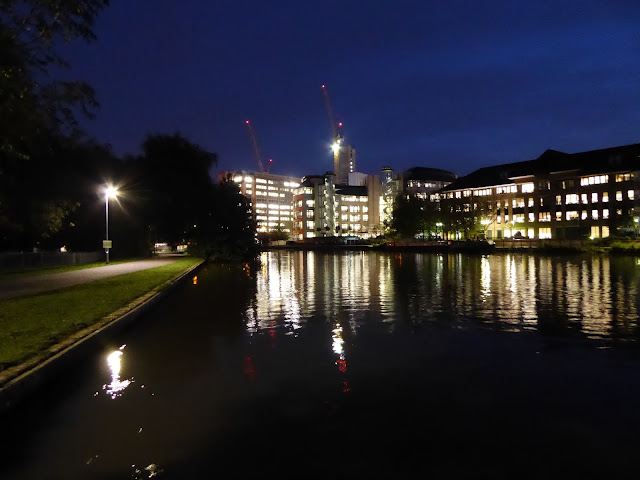 and the riverside offices of Reading.

We are hoping that there will be a lull on the river in a day or so to enable us to continue ... there is more rain forecast at the weekend.

What on earth will we do if we can't get to our winter mooring?
Posted by Carol at 17:09

You will Carol, hold on in there and if you get any jip from the parking people tell them you are not allowed to move. Luckily we have reached our winter mooring today..

Great news Sue! We've got fingers and toes crossed for a break!

Conditions look to improve a bit now we've had some dry weather, but with a low coming in the levels will be going up again. Might just have a short window of opportunity... Good luck! Take care.

Thanks Geoff, I certainly hope so!

Good luck Carol, may the levels drop for us both. Hopefully today our engine will get sorted so Mick can join another two boats who are chomping at the bit to get onto the canal. Fingers and toes crossed. Pip

Good luck to you both on both accounts Pip - engine and warnings! 3pm and a red has gone down from Sonning to Shiplake but not yet from Caversham to Sonning ... perhaps tomorrow.
Carol

I have everything crossed for you that you can continue your journey to Hambledon. We have certainly had too much wet stuff this year! Jennie