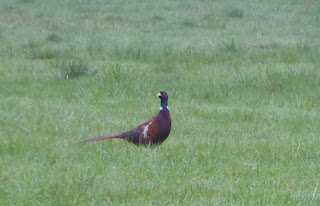 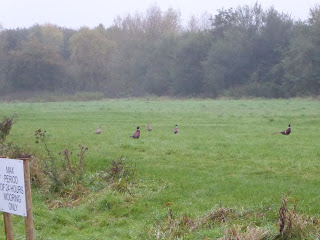 There was a bevy of pheasants on Beale Park meadow yesterday morning (16th) as we prepared to leave.  The red boards are still showing on the locks although on this wide expanse of the River Thames it does look very benign ... we shall see ... 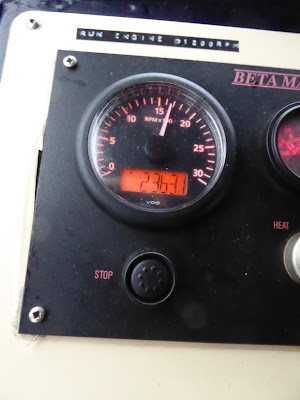 On Monday when we left Goring for Beale Park the revs were at 1100 for the same speed ... that journey then took about 15 minutes 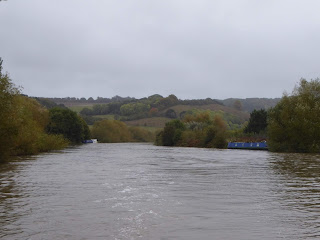 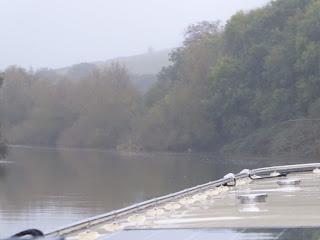 Into murk upstream ... and looking back 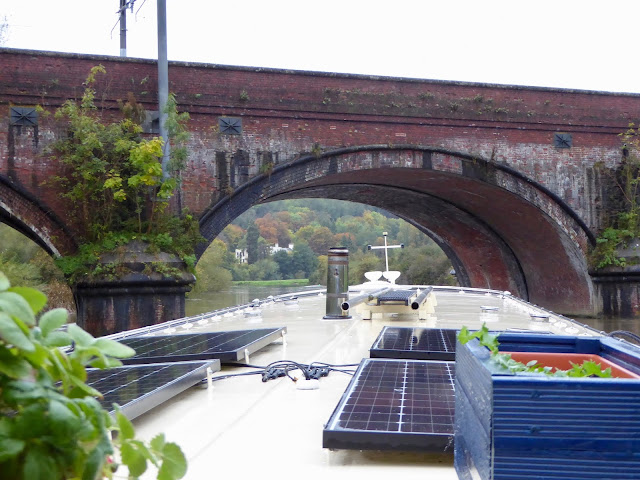 This journey was needing a lot of steering in the erratic, strong downstream flow ... here George is ensuring that we go straight through the middle of the arch at Gatehampton Railway Bridge where the narrowness increased the strength of flow even more 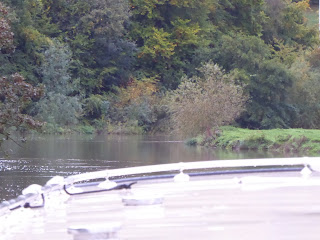 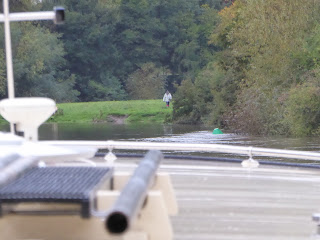 The green bouy seen here in the lefthand photo should be about 15 metres away from the point of land on this righthand bend nearly 100 metres ahead in the other photo to warn boaters going upstream to keep to the left as the water is very shallow on the inside of the bend. 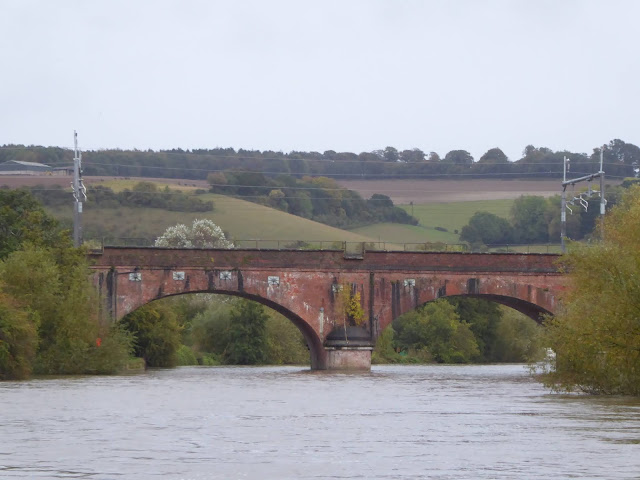 Safely through and looking back 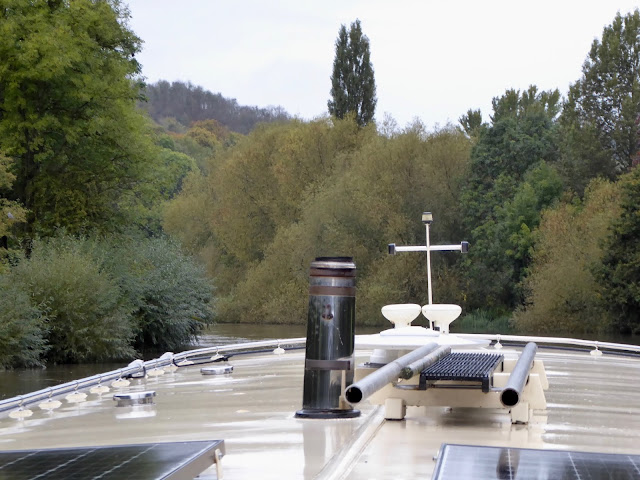 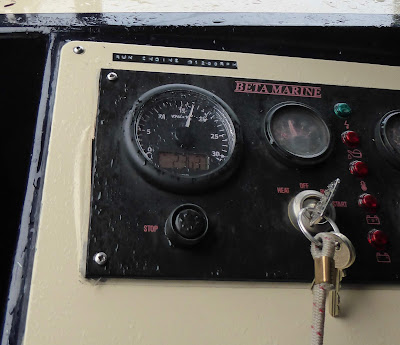 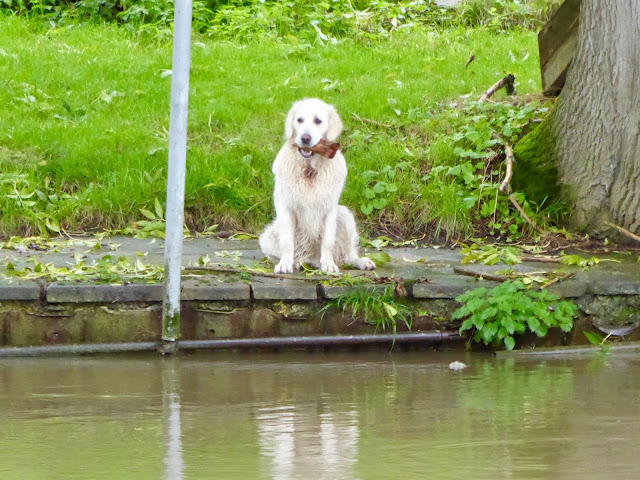 Dogs ... forever optimistic about someone coming to play ... this one doesn't care about a rising river at the end of his/her garden!  Cute eh? 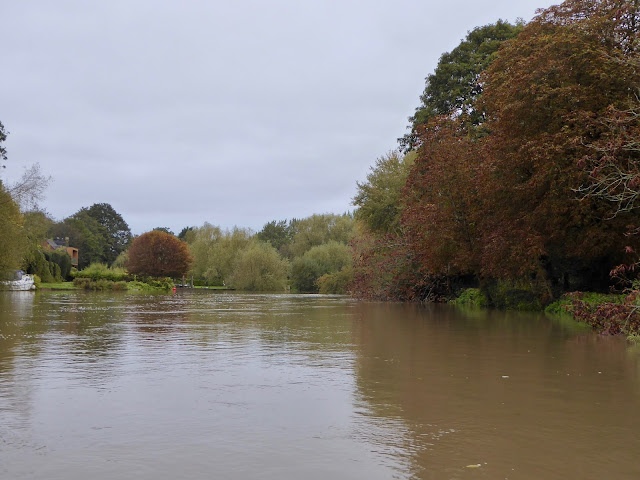 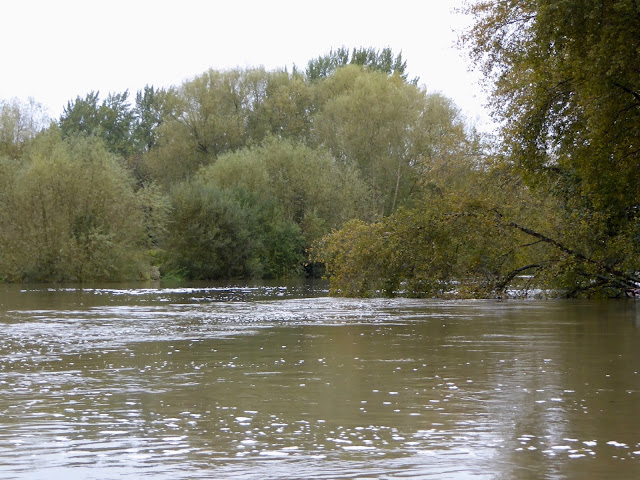 just round this righthand bend ... minding the falling tree 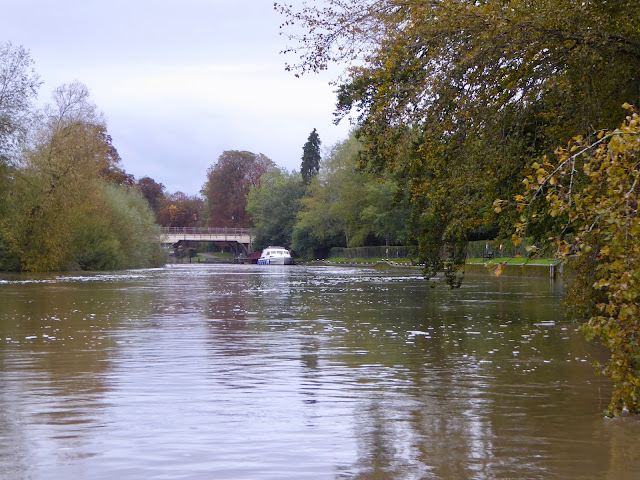 About halfway along these visitor moorings there is a length that is higher than the rest and this is where George wanted to moor ... it would give us a bit more room to rise should the stream increase more, this would prevent us from ending up on top of the moorings.  He put the bow of Still Rockin' into the side about a boat's length before the point he was heading for and I took the long bow rope and stepped off.  The flow from the side weir comes in from the left below Goring Lock and hits the moorings and of course then flows down the edge here which pushes the bow out again and George is also having difficulty bringing the stern into the side.  He eventually gets close enough to get off with his rope and quickly calls to me to tie up to the nearest bollard while he was tying onto the one closest to him.  By this time the bow was out into the stream and he came to help me; I had already wrapped the bowline round the bollard twice making sure that it was overlapped so that it wouldn't slip and between us we managed to get Still Rockin' as near to the side as we could. 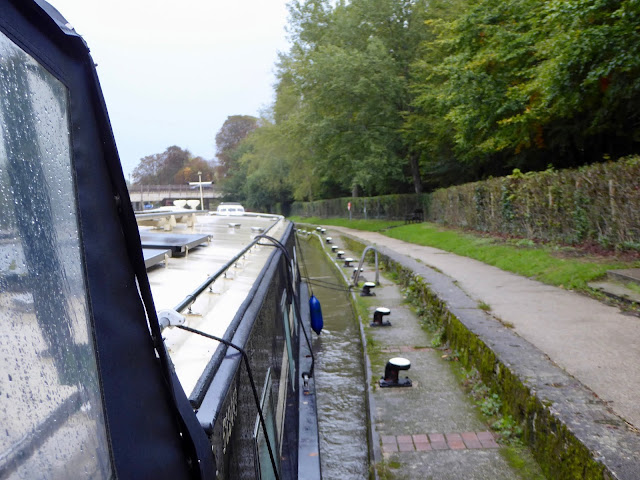 By this time it's 9:20 and it's taken us over an hour to do a journey that usually takes about 25 minutes. 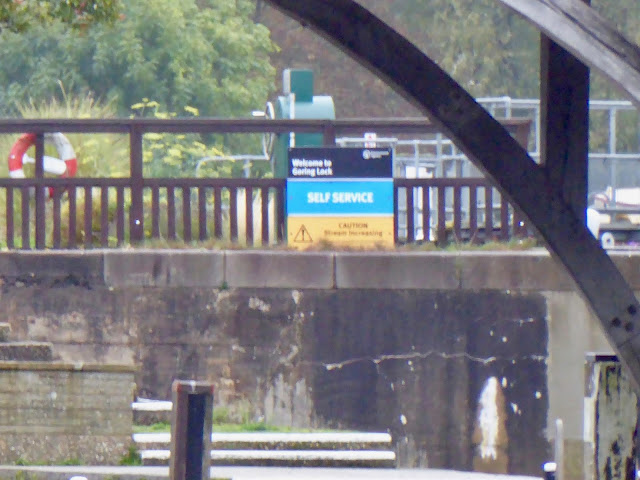 We were a bit confused that the boards at Goring Lock were only on orange (stream increasing) and not on red but that is because the flow of the reach upstream of this lock is not on red boards (no navigation).  The reach that we are on here below Goring Lock is on red meaning that Whitchurch Lock (next downstream) will have a red board displayed.

By the time we'd closed up the stern deck, and done all those small tasks required after cruising we lit the fire and settled down for a coffee hoping that we'd done enough today to keep us safe until the river levels decrease and we can carry on with our cruising plans ... 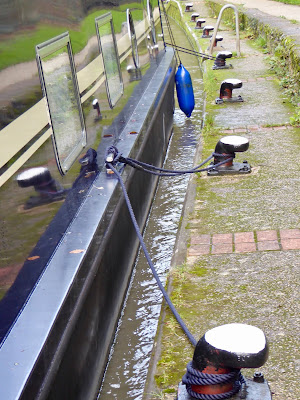 we decided to put an extra line in a spring onto the middle cleat ... better a bit much than too little!


Watch the flow ...
Two swans having a very hard time getting upstream although they came surfing back a short time later on the flow (not snow)!

We walked into the village for a few supplies and noticed on the way home noticed that there was a lock keeper on duty and went to speak to him about staying here.  He told George that he'd seen us arrive this morning and that we should not have been moving while the reach was on red boards.  We knew that, and perhaps we'd have been ok moored up at Beale Park to sit out the duration but felt that we'd be safer here at Goring because if thing did get really bad at least there are people about who can help ... hence out decision to move up.  We asked him about mooring fees and he informed us that while the reach is on red there would be no charge, and that on the day it changes to stream decreasing that would be the first day of the 72-hour moorings allowed.

The afternoon was bright and warm and we even managed to sit on the back deck in the sunshine to read after a hairy, scary morning.
Posted by Carol at 07:34

Glad you got there and can stay safe.
Pip

Scary stuff! Glad you are safe

Thanks Pip and Mick and Neil and Kath - the river is still rising each day but thankfully not much rain in the forecast after today for the next week or so.