We got our new data allowance yesterday and I spent a happy couple of hours catching up with other boating blogs, they seemed a lot more interesting than what we’ve currently been doing!

We spent a couple of days at Yiewsley catching up with shopping as there’s a handy Tesco, Argos, Pet shop etc nearby.  After putting a few loads through the washer we reversed back to the water point to fill up and get rid of the rubbish we set off again on Tuesday heading north. 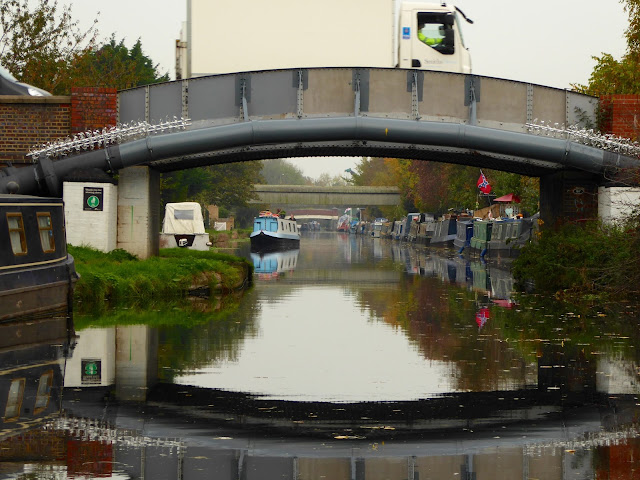 It was a dry dull day as we approached Uxbridge Boat Centre where we stopped for fuel, gas and coal and continued on to moor below Denham Deep Lock.

A few weeks ago you may remember that Marcus came to the boat to see to a fuel leak on the engine, there was a loose connection on the fuel filter housing which he replaced with a previously used one that he had in stock and the leak stopped.  In the meantime he glued the original housing for us to keep as a spare.

When we were coming off the Thames at Teddington it was quite a high tide and George found it rather difficult to turn into the lock cutting across the flow of the river and although he didn’t realise at the time, when he thought about it later he remembered that the revs topped at 1700 during that turn.  There was obviously a problem.

He contacted Marcus, a Beta engineer to discuss this as we’d previously had those revs up to 3000 without any problem at all. Marcus thought that it could be fuel starvation and recommended that George put the original fuel housing back on and to test the revs.  On Wednesday here at Denham deep George refitted the housing and put the engine through the rev range (not in gear) and the glued hose blew off - bugger! Fuel everywhere!

[Edit/update] when the hose blew off whilst the engine was tested we were firmly fastened to the bank!

Another call to Marcus as now we can’t go anywhere until this is fixed.  Marcus immediately contacted Beta and arranged for a new fuel housing and filter to be dispatched right away to Harefield Marina to be collected yesterday.  All went well and the new housing is fitted, the engine revs, again not in gear went up the full range - brilliant!  When we’re on a straight deep(ish) bit of canal with no moored boats, we’ll try them again in gear.  Fingers crossed!

OK, so boating is obviously an extreme sport! Testing the boat with fuel spurting out everywhere - that is extremely Top Gear of George, Carol!!
Please be safe when there are flammable fuels about! Just keep the chardonnay handy - I am sure that is protection enough!
M&Dxox

Ok Marilyn, will do! I forgot to mention that when the hose blew off while George tested the engine we were securely fastened to the bank! x

Glad to see you got that fixed, not good!
When I ran out of data I tethered my phone to use it's unlimited data allowance only to get a slapped wrist as 3 no longer allow it! So I upped my allowance to 15Gb instead.