At the top of the tide on Tuesday 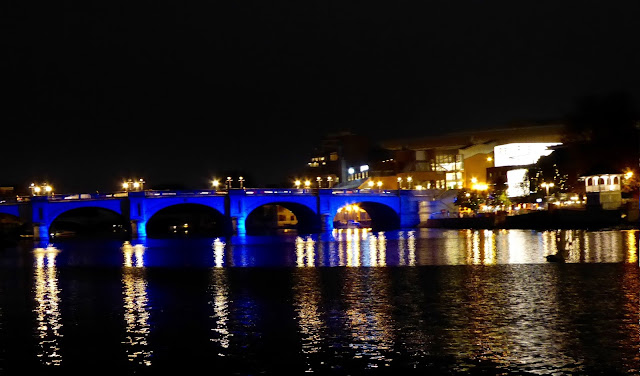 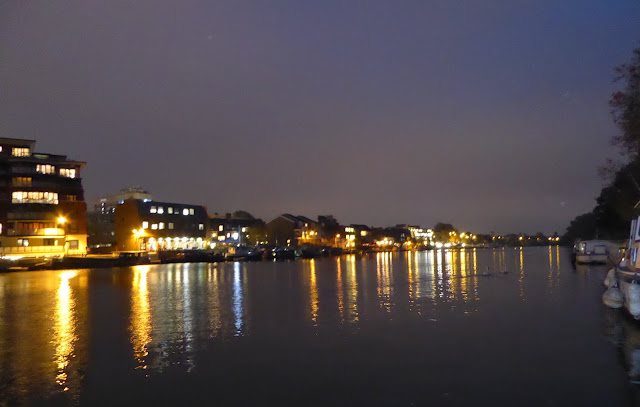 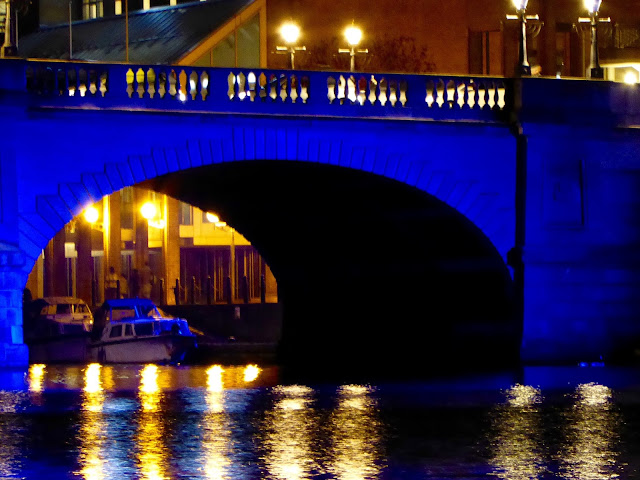 Kingston from our mooring on Sunday evening - beautiful!

Tuesday (yesterday) morning I needed to pop into Kingston for supplies and then the plan was to untie and move on but just after I returned to Still Rockin’ the tree surgeons arrived just outside the boat. I had a few words with them and they promised us the boater’s gold … brilliant! 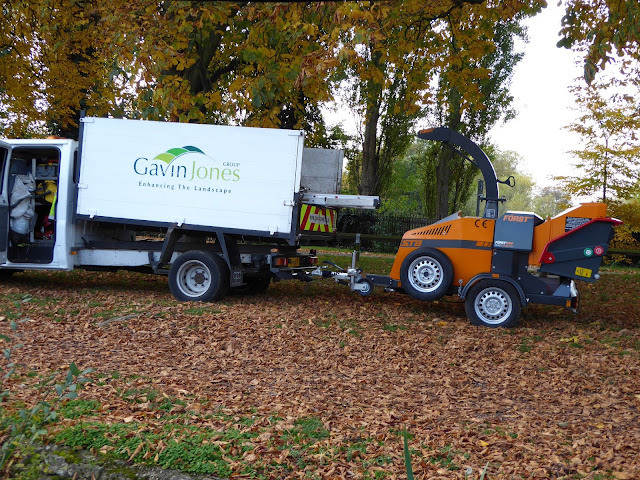 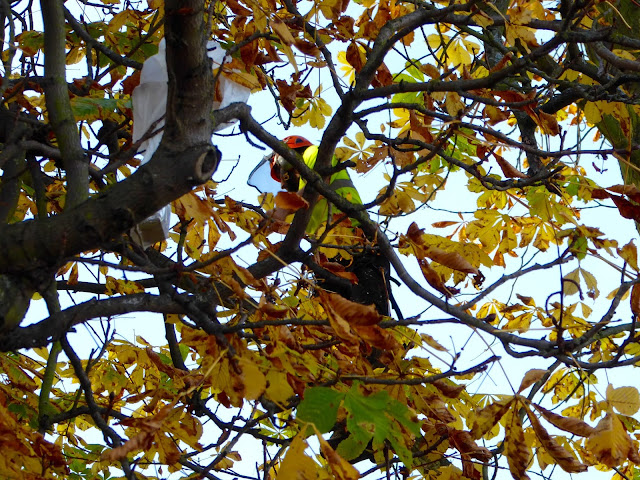 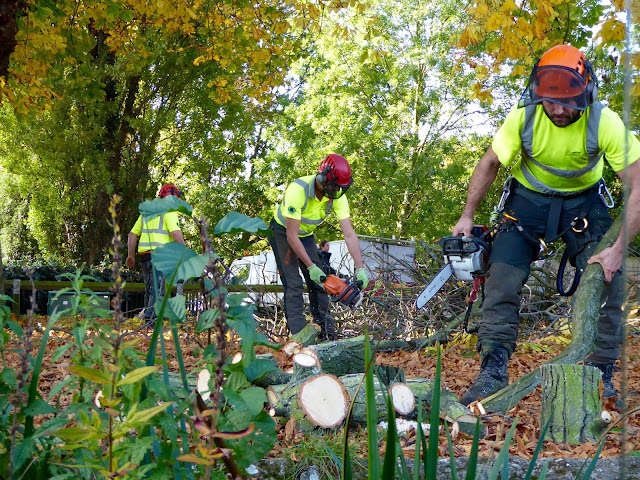 It took them less than an hour to finish their work; we loaded the cut logs into the bow and it was time to move on. 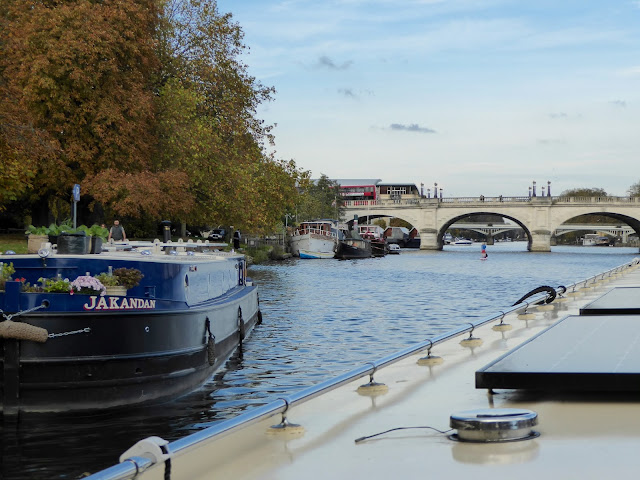 Heading down stream through Kingston Road and Rail bridges 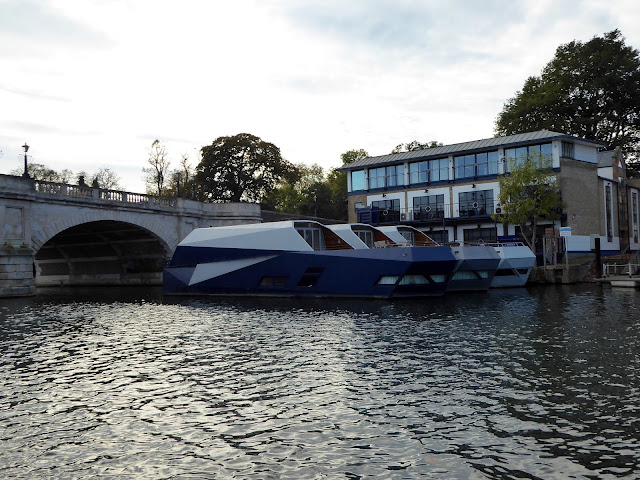 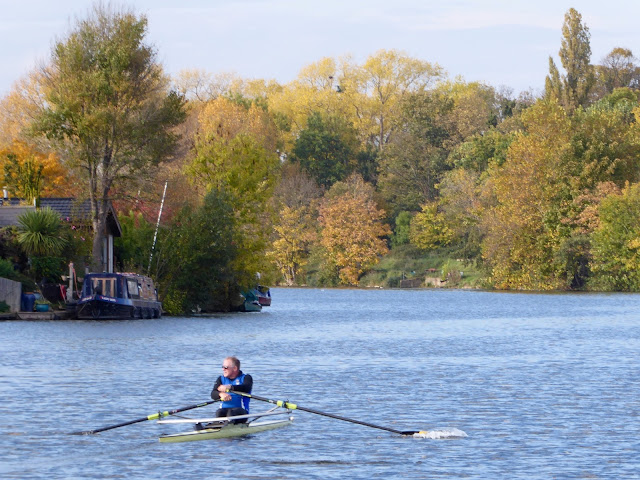 Our destination is just around the bend 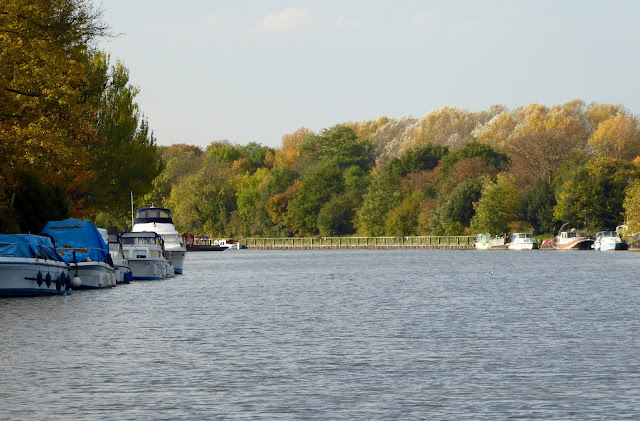 Plenty of mooring spaces there! 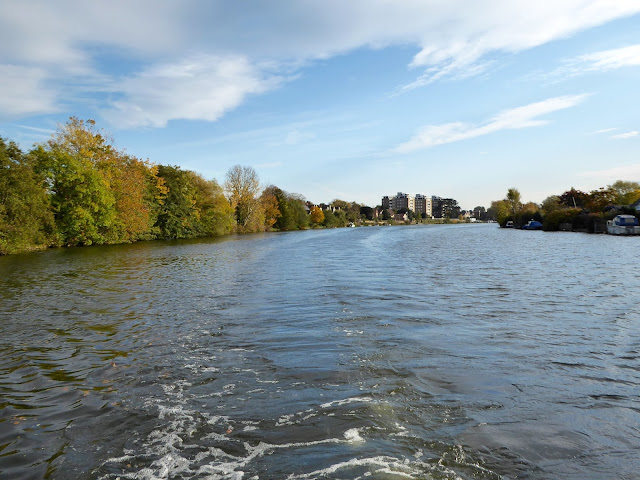 Looking back towards Kingston, this is the wake created by Still Rockin’ it’s practically flat causing very little disturbance to other boats not like the cruisers that are half our size! 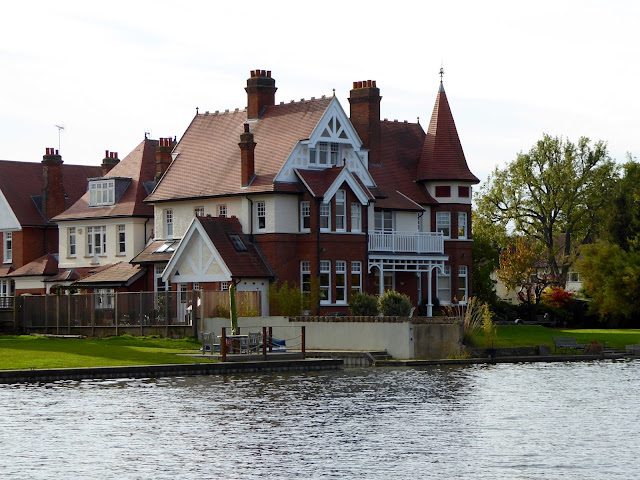 A bit big, but very pretty 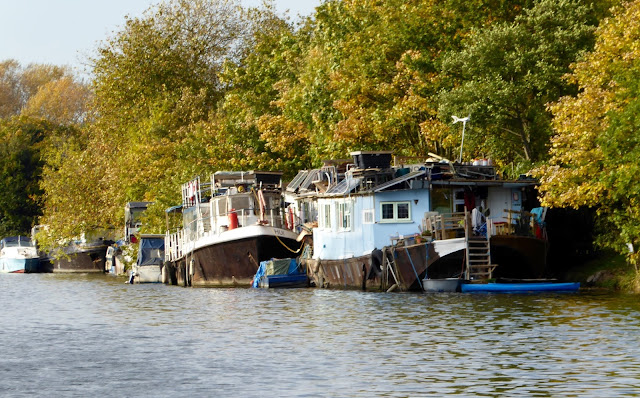 The continuous moorers are still there, apparently no-one will take responsibility for this stretch of the river so there’s no-one to move them on, I wonder if they’re licensed?

It took us just 30 minutes to arrive at Teddington Lock which we did at the top of the tide.  When we pulled over to moor I had problems getting the bow rope tied as the boat seemed to be going upstream!  George commented that he felt the pull upstream too as we were approaching the moorings. 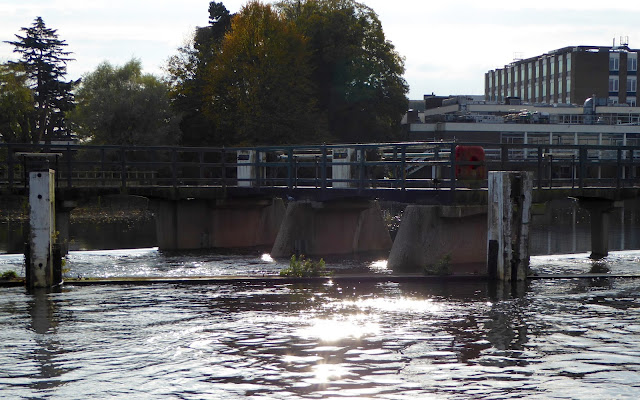 We then looked over at the weir opposite ... 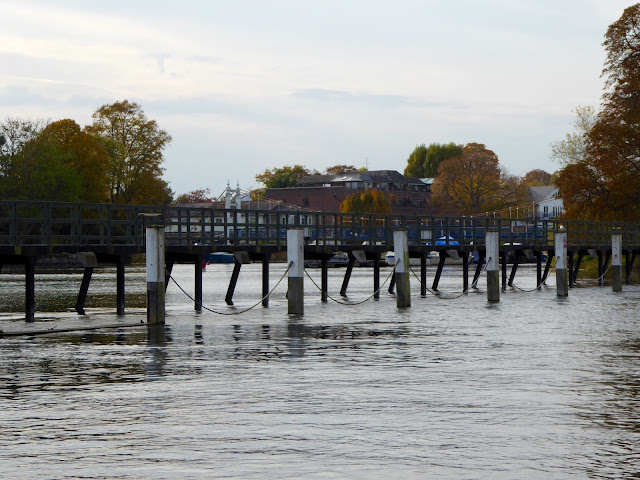 ...and saw that the water was coming up the weir and into the lock cutting instead of flowing down it into the tidal Thames. 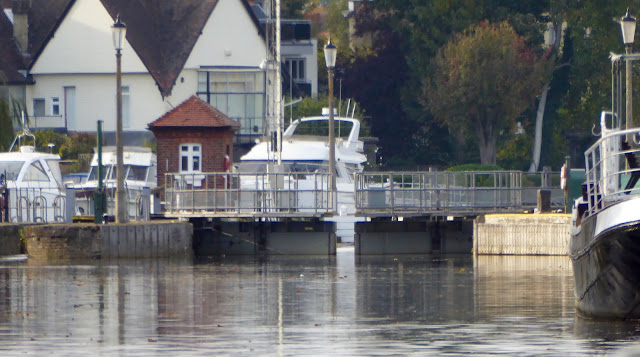 … and the lock gates were all open too!

I sat watching the water fascinated and didn’t realise that it was so quiet until the tide changed again and started to ebb out and I could hear the water bubbling away.  It soon became a torrent of water moving and the noise got to its normal noisy self. 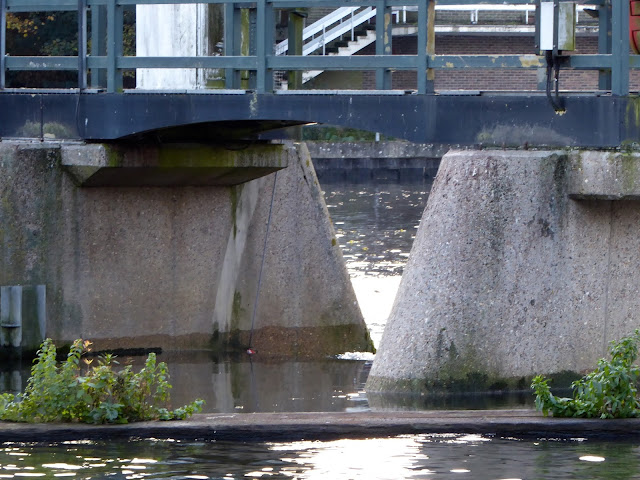 You can see here that the weir water has dropped about 5-inches and is falling.

When George went to pay the mooring fees he asked the lock keeper about the tide as we’d not seen this happen before.  He was told that it had been 7.5-metre (25-feet) high and exceptional.

Although Teddington is normally regarded as the upstream tidal limit, high spring tides can raise the head water level in the reach above Teddington and can reduce, or on occasions even reverse, the flow for a short period. In these circumstances tidal effects are observed upstream as far as Molesey Weir.

For the the non-boating readers, depending whether you’re coming upstream or down, Teddington is the first/last lock where the River Thames starts/stops being tidal.

At the beginning of our summer cruising we left the Grand Union Canal and joined the tidal Thames at Brentford.  The time of our departure from Brentford has to be timed so that we leave with the tide so that there is sufficient water to carry us to Teddington and the non-tidal Thames.  Now, at the end of our summer cruising we will leave here on just prior to the tide and the ebb tide (going out to the sea) will carry us to Brentford before it gets too low for us to enter the Thames Lock at Brentford. The journey takes about an hour and a quarter.

After a cuppa we went for a walk around the locks ... 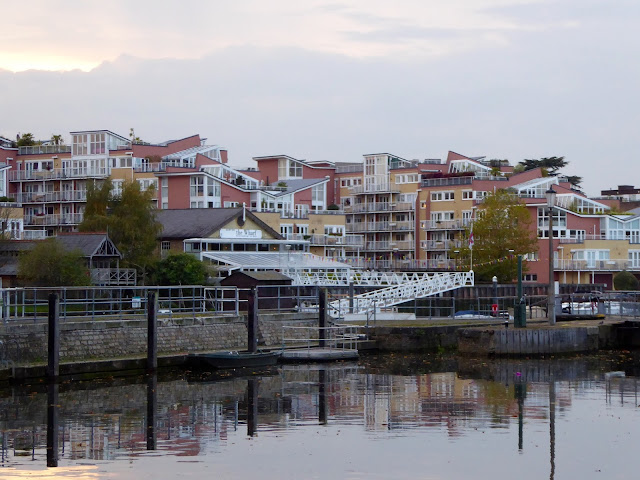 Just look at all those angles across the lock 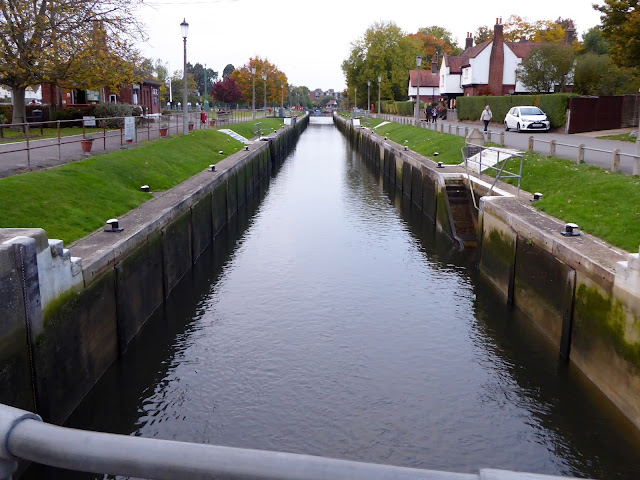 There are three locks here at Teddington, this is the biggest one with its tail gates still open to the tide 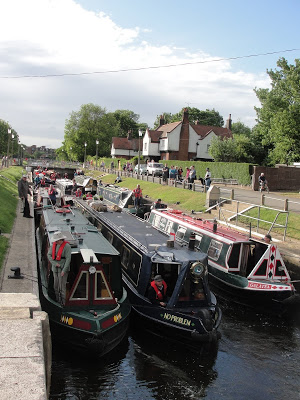 … and this was the last time we used it on our narrow boat Rock ’n’ Roll back in May 2011, for more of this epic cruise click here. 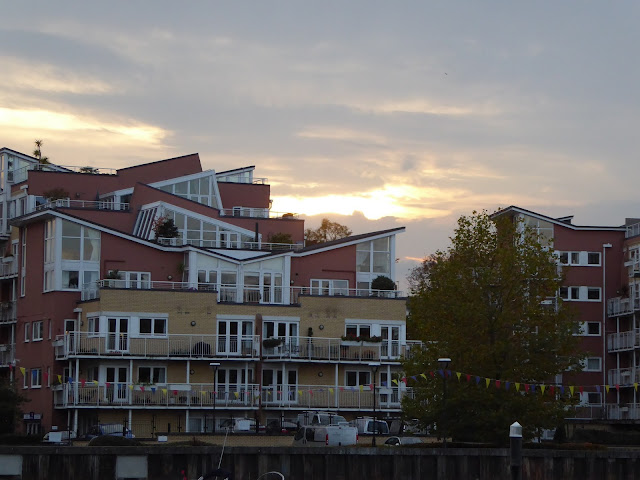 The sun is setting and it’s only just after 4pm 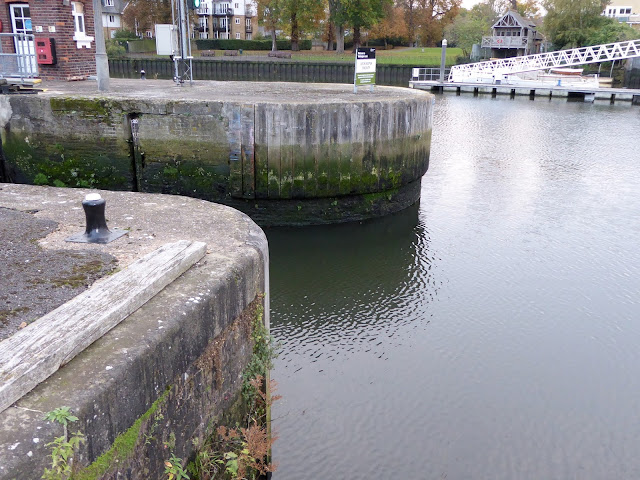 This is the tail end of the lock we’ll probably use on our way onto the tidal Thames today you can see where the tide came up to when we arrived yesterday. 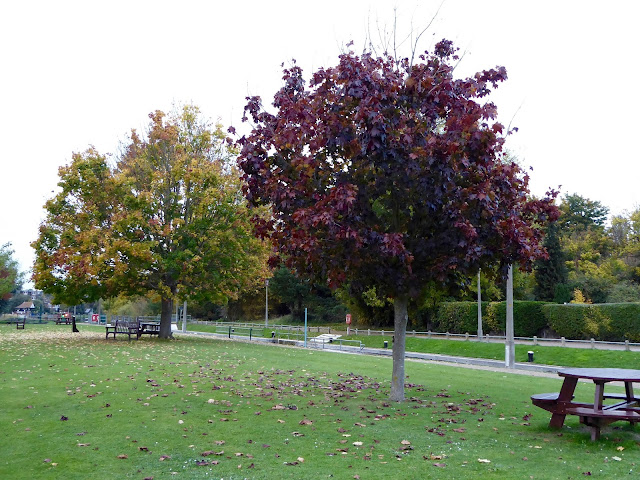 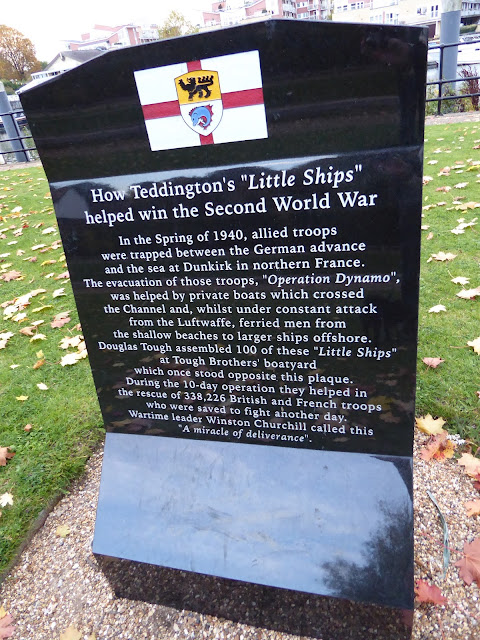 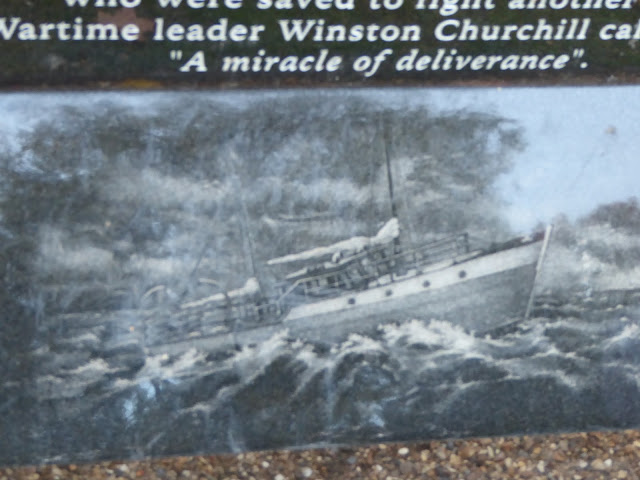 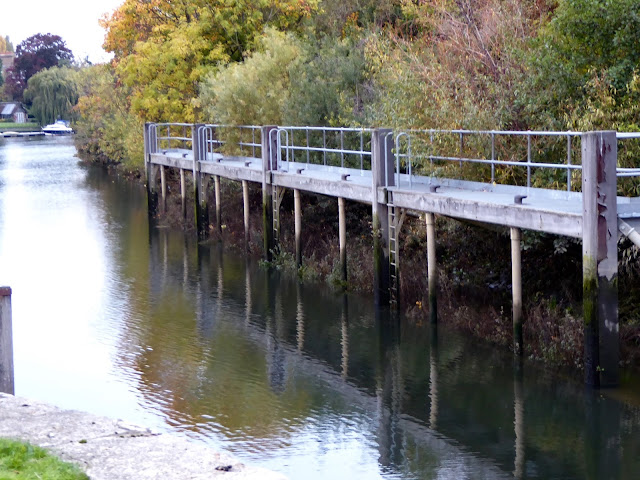 You’d have a bit of difficulty tying up here at low tide! 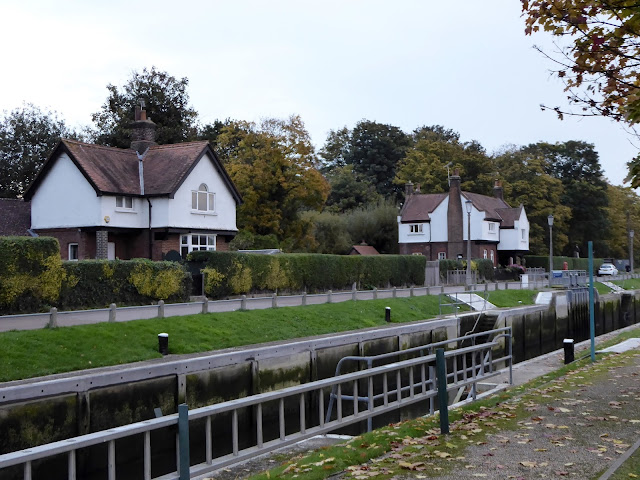 Well we’re off on the tide at about 3pm this afternoon so watch this space!
Posted by Carol at 08:52