To be honest, I never realised that there was a canal through Newport until we called at the petrol garage whilst working on the tea shop over Christmas ... so I had to take a break from the renovation to have a look ... 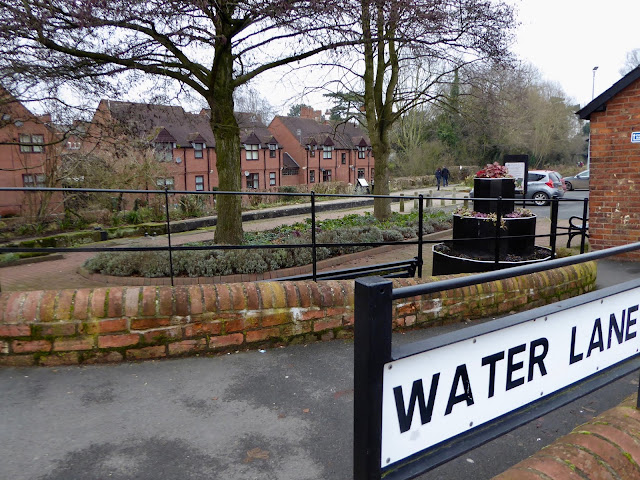 The first day of 2020 was dull and very cold here but there were lots of families out and about walking when I saw my first view of the canal. 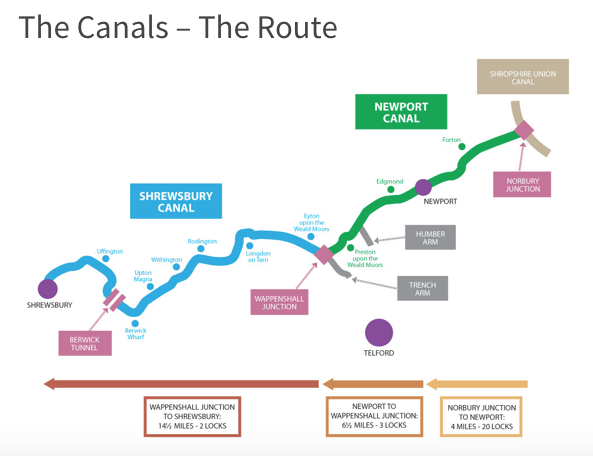 The 4-mile length of the Newport Canal was opened in 1835 and joined the Shropshire Union Canal at Norbury and the Shrewsbury Canal at Wappenshall.  The Newport Canal had 13 locks, 7 bridges and 2 aqueducts.
The History ...
The Shrewsbury & Newport Canals comprise two very different waterways. The western section was the Shrewsbury Canal, opened in 1797, which went from the coalfield in what is now the town of Telford to the county town.
This was a tub-boat canal, designed for boats 6ft wide, 20ft long and 3ft draught. Its main engineering features were: the Trench Incline, which raised boat 75ft to the summit level and continued working until 1921; Longdon-on-Tern Aqueduct; Berwick Tunnel, which was the first tunnel of a significant length which had a towpath through it; and eleven guillotine-gated locks, remains of two of which survive at Hadley Park, Telford.
The eastern section, from Norbury Junction to Wappenshall Junction, opening in 1835, was a branch of the Birmingham & Liverpool Junction Canal. Thomas Telford’s last canal has superb stonework, which can be particularly admired at Forton, with its aqueduct and skew bridge, and at Wappenshall Junction.
With the opening of the Newport Branch, the section of the Shrewsbury Canal from Wappenshall Junction to Shrewsbury was modified to take conventional narrowboats.
These canals became part of the Shropshire Union in the late 1840s and shortly afterwards were leased to the London & North Western railway.
Trade reduced following the opening of the parallel railway line in 1848, though much iron ore and limestone continued to be carried during the rest of the 19th century.

The canal was closed by an Act of Parliament in 1944 obtained by the London Midland and Scottish Railway company which took over the canal in 1922.  However, it remained in water until 1965 when, despite vigorous protests from locals most of the land was sold.

In 1969 Newport Urban District Council bought the 1½ mile stretch of derelict canal that runs through Newport and funding allowed the council to dredge and re-water the section for fishing.  Unfortunately when the High Street was upgraded in 1970 construction waste was deposited  near the soft bank of the canal causing the recently dredged area to rise.  The section was then filled in. 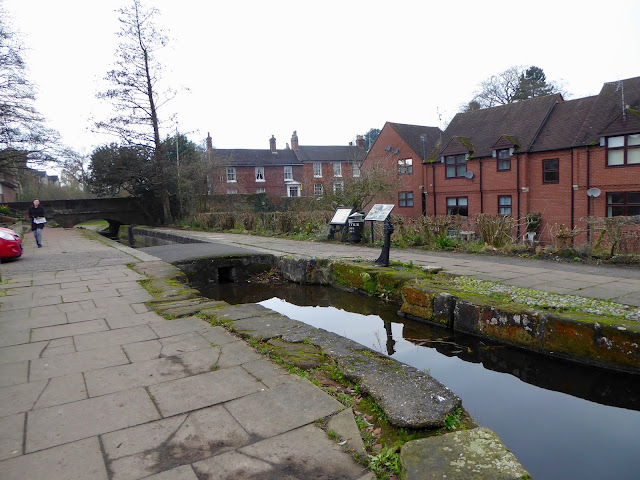 Town Lock ... number 20 of 23 locks between Norbury and the junction with the Shrewsbury Canal at Wappinshall.
With Heritage Lottery Funding The Shrewsbury & Newport Canals Trust, formed in 2000 is making progress to protect, conserve and improve the route of these canals.  In 2012 plans were in hand to restore Town Lock and the other locks along the Newport length as prelude to full restoration. 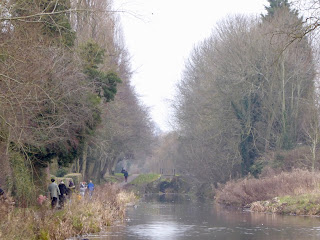 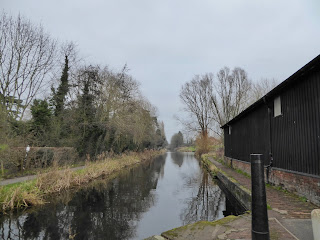 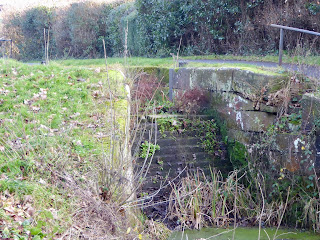 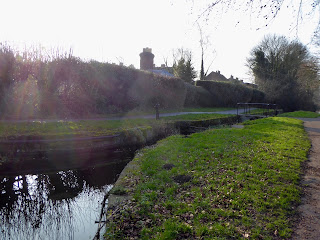 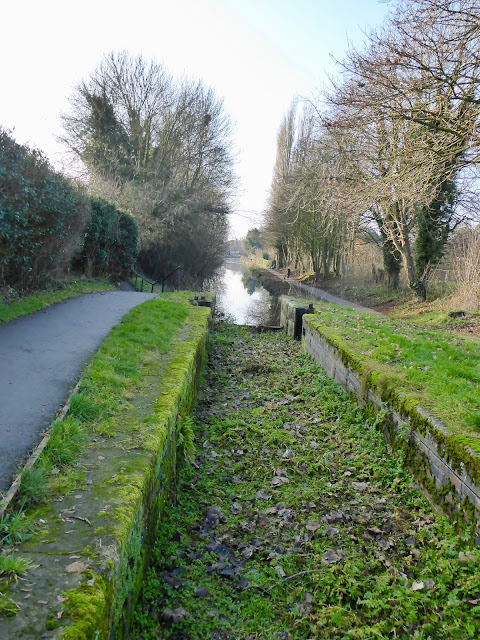 Fisher's Lock and beyond 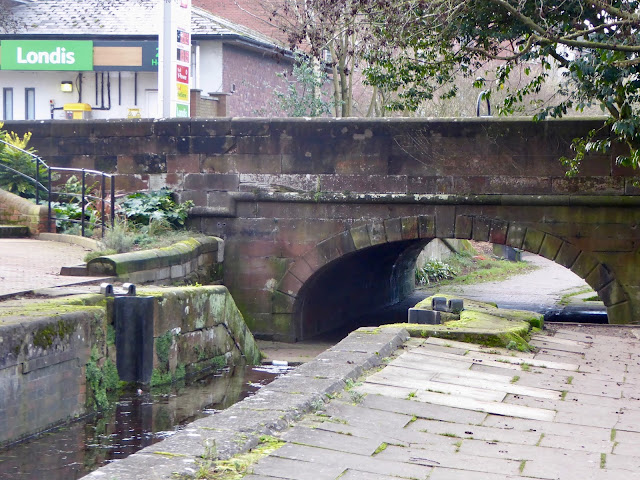 and under Town Bridge where the canal was filled in due to the incident when the road and bridge were undergoing renovation in 1970. 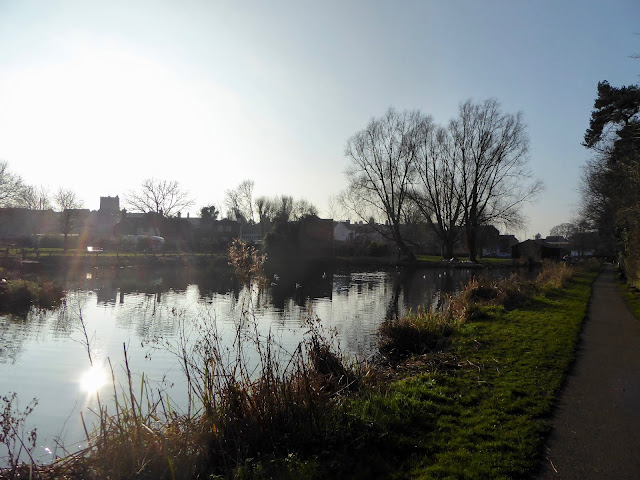 The wider expanse of water just above Town Lock may have once been a winding hole (for turning boats in) or maybe a town wharf. 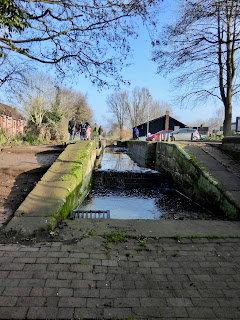 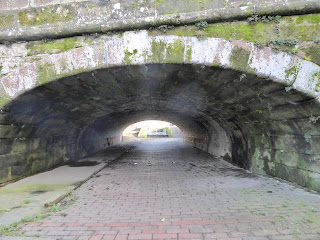 In the photo on the left I'm standing with my back to the bridge and on the right I've walked through the bridge on the cobbles over the filled in section of the canal, both looking upstream at Town Lock. 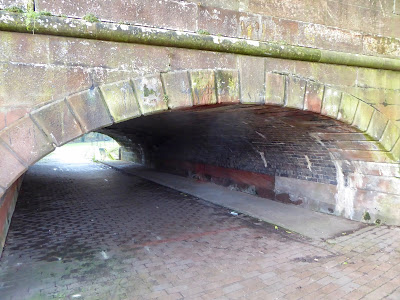 From that same place but now looking downstream (west) ... 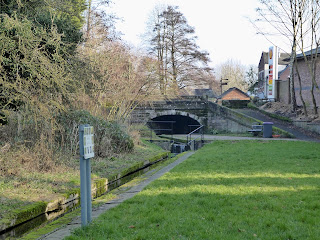 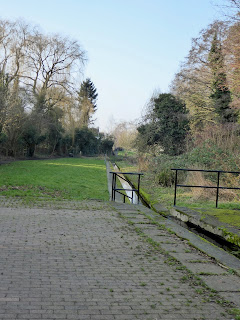 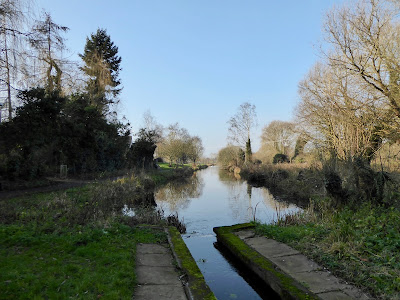 at where the canal continues through this very narrow channel for a while before opening out again in the direction of Shrewsbury. 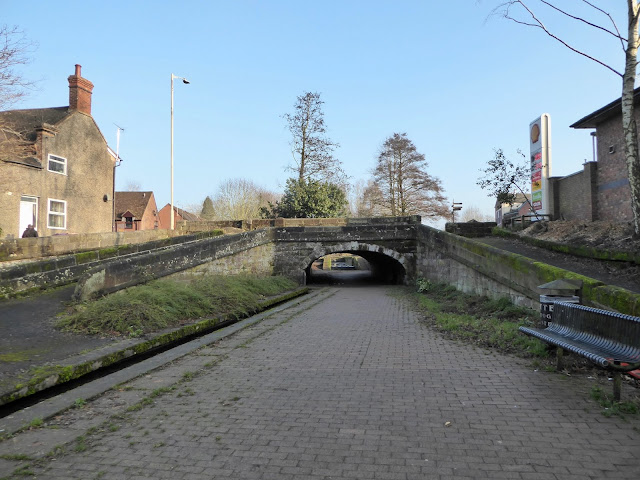 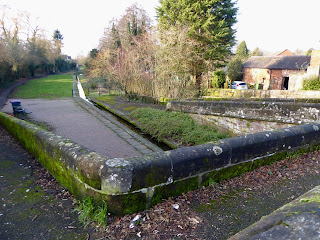 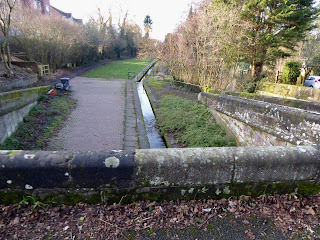 which took the tow path from one side of the canal to the other.  Boat horses would have been taken over the bridge to get to the tow path on the other side without having to unhitch the rope between the horse and the boat.


There is a very interesting article on the history of the canal HERE which includes information regarding the trading boats which navigated it over its lifetime ...

and HERE is a thought provoking article of a timeline of what else in the world was going on during the lifetime of the canal from 1760 - 1950 ... I found it fascinating anyway!
Posted by Carol at 15:42

I hope you also found my free maps for the Shrewsbury and Newport Canal which show more details at
https://www.waterwayroutes.co.uk/blog/32m3/

There are over 50 free maps for restoration projects at
https://www.waterwayroutes.co.uk/blog/maps-free-for-restoration-projects/ if you wish to expand your knowledge of past waterways during the cold winter days.

Thank you Paul, we'll take a look. We had difficulty loading the map and then the link expired. Would you be willing to send it again as I've had a new phone and could try it on that?

Wonderful canal history, Carol. It’s always sad to see so much filled in and lost, but fascinating too to be able to follow it.