Finding a mooring and a sunken boat ...

Friday (3rd May) 8am after a quiet night and with mooring ropes long enough to deal with changing tide levels ... 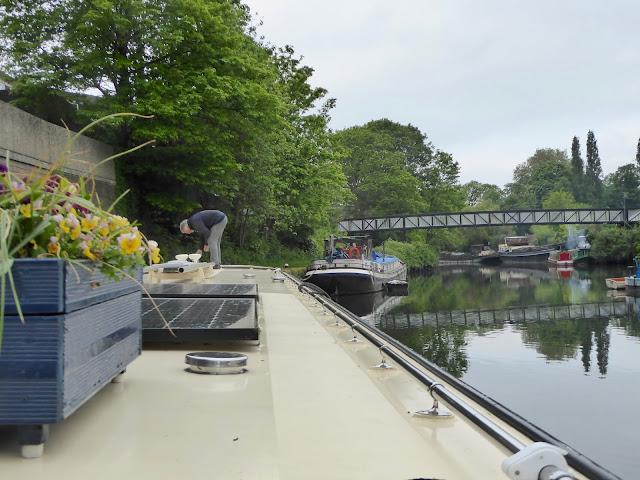 it's time to make ready to move on and George lays down the post that displays the navigation height ... 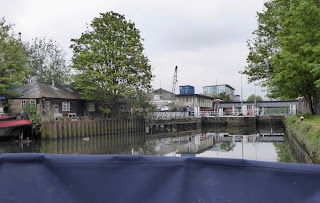 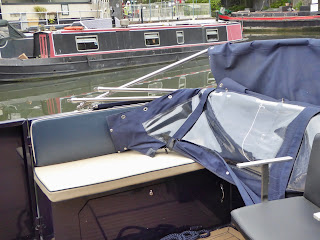 and together we've lowered the pram-hood (rear canopy) because the bridges on the canals are not quite as big as those on the Thames! 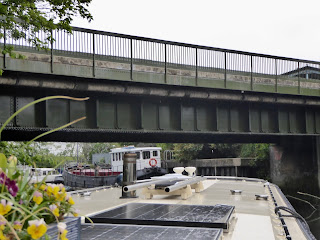 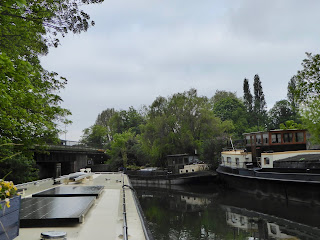 We continue on our way along the River Brent and under the bridge where last time we were here we got stuck in the silt  but today the scaffolding is gone as the passage was easy. 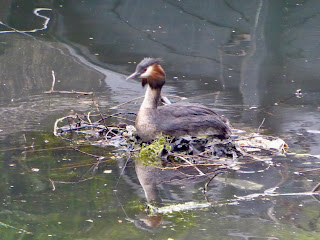 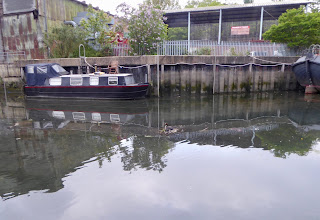 Not seen a Great Crested Grebe on a nest before, if you look carefully you might be able to see the nest in the middle of the river in the photo on the left ... it looks as if she's 'pinched' a coots nest it's such a mess! 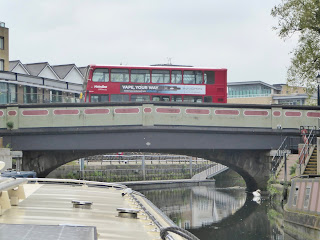 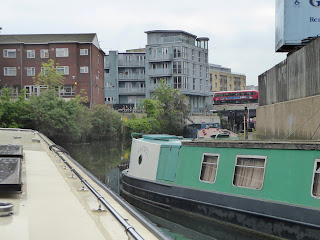 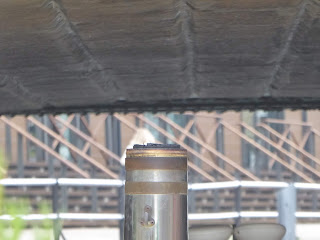 Under Brentford Bridge ... leave it too late and you can't get under or too early and you get stuck on the bottom ... just right today though! 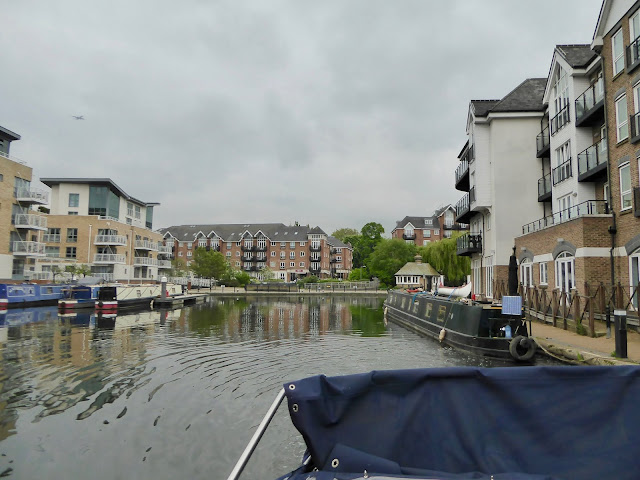 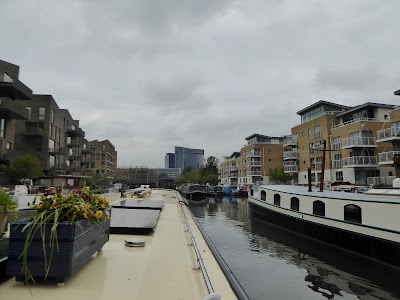 after which we stopped to get rid of the rubbish and find a mooring space ...  we're now on the Grand Union Canal 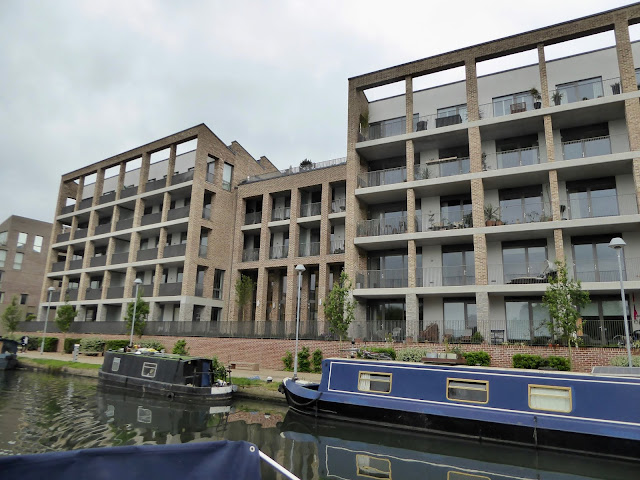 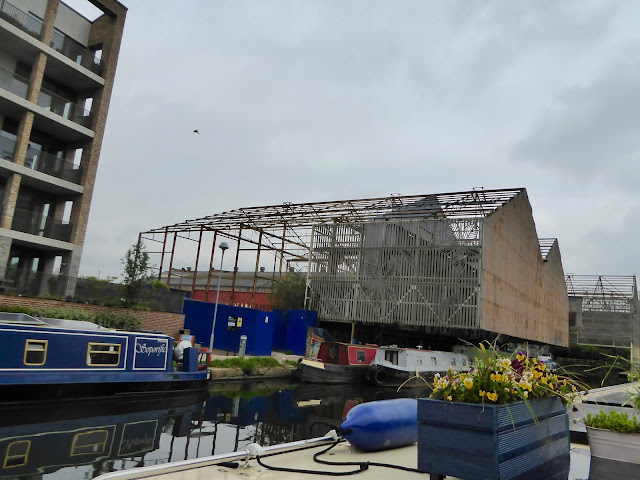 and it's good to see that there's some of the older structures left. 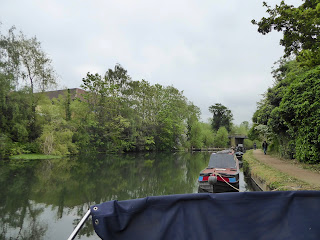 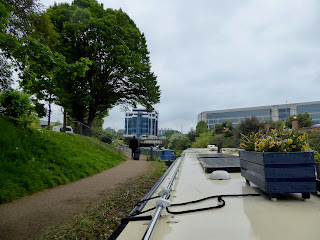 We managed to find a mooring after the railways bridge and will stay here over the Bank Holiday weekend which was nothing like the last one!  This one was wet, wet, wet! 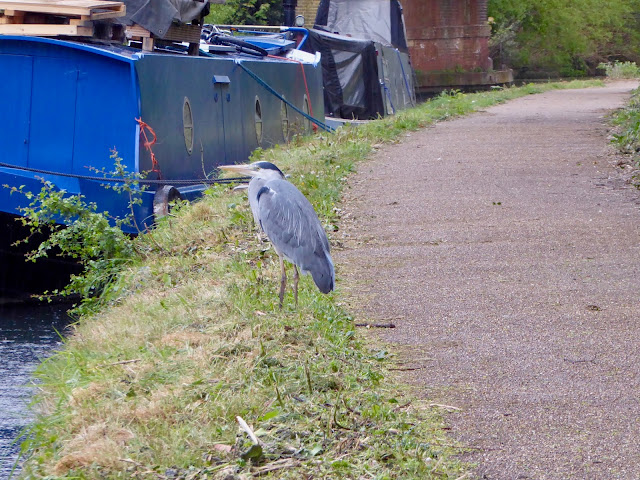 On the Sunday a young chap came to moor in front of us and asked if we were planning to move today, 'no, we're staying until Monday' I said ... 'only there's apparently a boat sunk in Clitheroes Lock' he said.  So George went for a look see ... 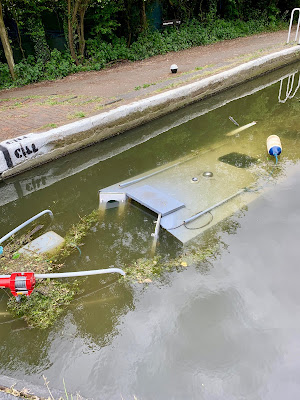 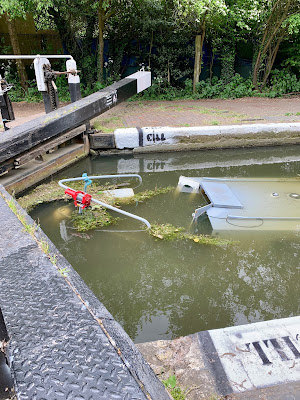 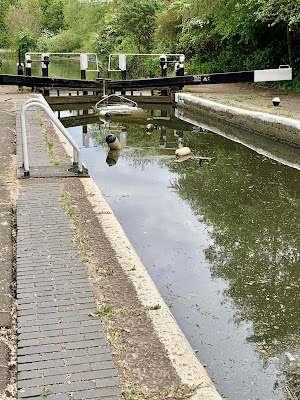 Looks weird doesn't it?
He's heading up the lock but has got the his bow caught on the upper cill and sunk his boat ... how on earth did that happen? 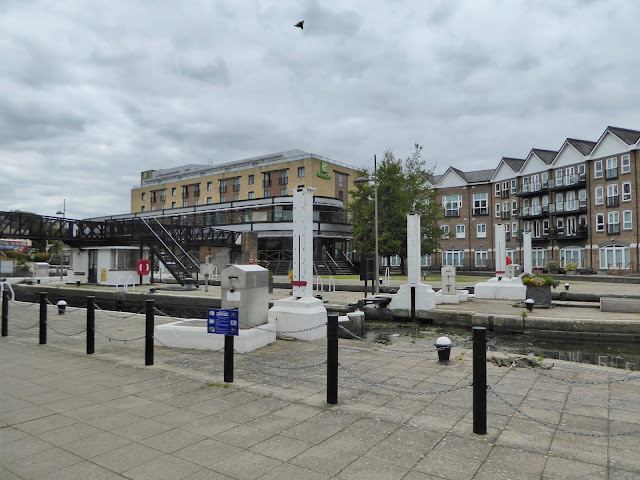 Bank Holiday Monday as we walked into Brentford we passed the gauging lock where in times long gone the lock keeper would gauge the weight of a boat's cargo to enable the correct fee to be charged. 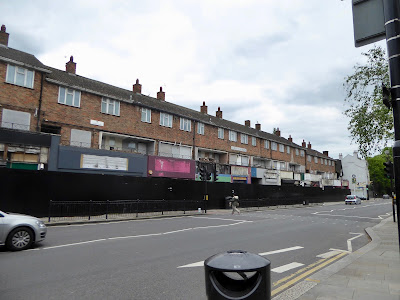 Brentford town centre in undergoing a huge regeneration ... these building are all empty I wonder if they'll be refurbished or demolished 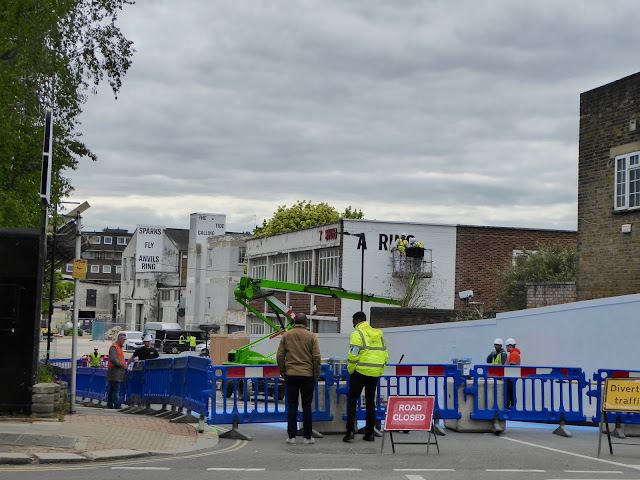 I couldn't work out what was going on here until George pointed to the lettering on the street's buildings ... Sparks Fly  Anvils Ring, The Tide Calling and The Ring ....? still being painted ... and the road has been painted blue!  Still not sure what's going on though!

We returned to Still Rockin' and dropped off the shopping, had lunch and then walked up to the first lock to see if anything had changed ... 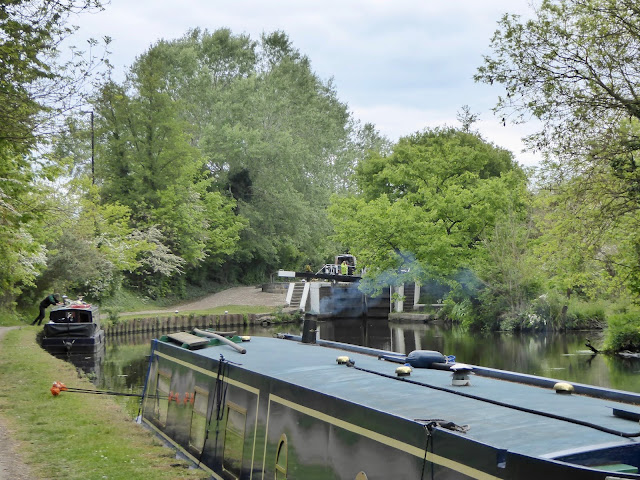 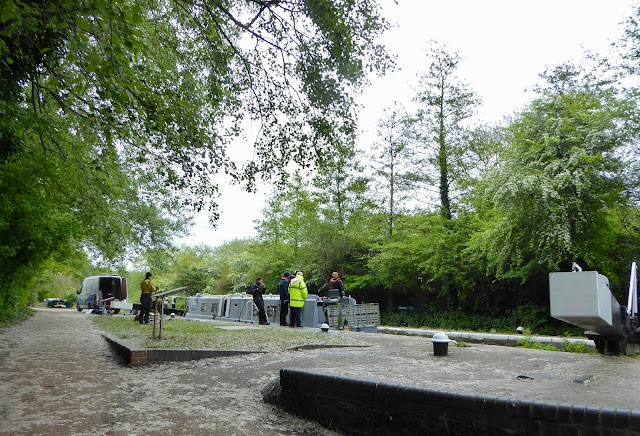 The boat owner was there (in the hi-viz) and we asked what had happened ...  from what I could gather his tiller arm had been knocked out of its skeg when the tide was apparently too low whilst waiting at Thames Lock (so he's come off the tide today).  He thought he'd fixed it but on the way to Clitheroes Lock realised that it was still not fully in.  He decided to go into the lock, close the tail gate, open his weed hatch to try to relocate the tiller arm.  Unnoticed by him was that the upper gates were very leaky and of course the water level rose, his boat moved forward and his bow caught on the cill, and the boat sank. ??? Very, very puzzling ??? 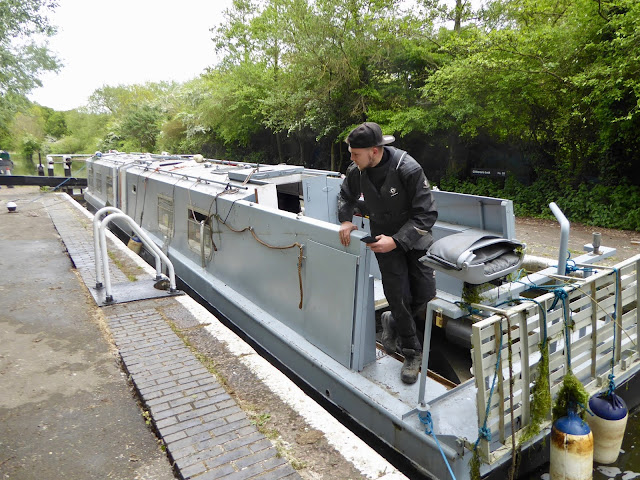 The guys contracted to refloat the boat are still pumping the water from inside before they can move it from the lock.  The owner told us that his boat is now going to a boat builder for a complete refit.

We will now continue our journey up the Grand Union tomorrow (Tuesday).
Posted by Carol at 16:25

I can't get my head round how he got the BOW caught on the cill? Eh? (head scratching)

Neither can we Sue ... we've tried every which way and are still puzzled! Why even, was he on the tidal side of thames lock when the water was so low it knocked the tiller arm out of the skeg?