We pulled pins at 08:30 yesterday for the couple of hundred yards to Uxbridge Boat Centre and on the way we saw these nesting moorhens ... 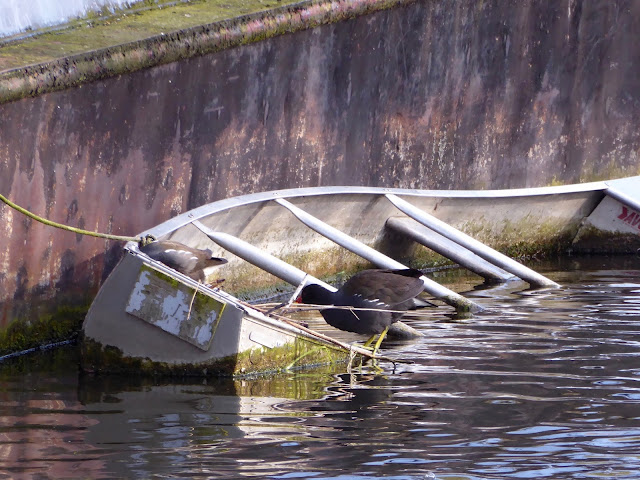 ... both parents here, the female on the left is feeding her chicks and I noticed as we passed that there were at least three eggs not yet hatched. 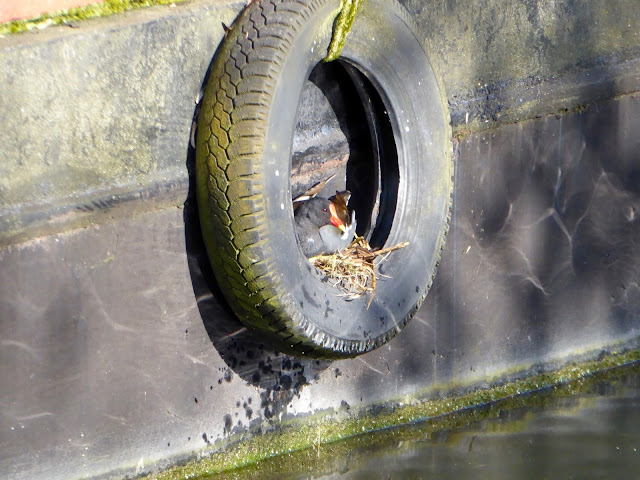 They certainly nest in the most precarious places!

In no time at all we arrived at the boatyard just in time to see the previous occupant of the dock coming out to moor alongside and then it was our turn ... 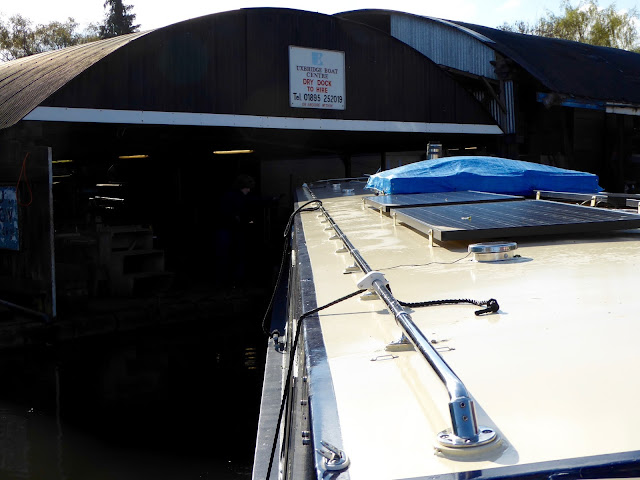 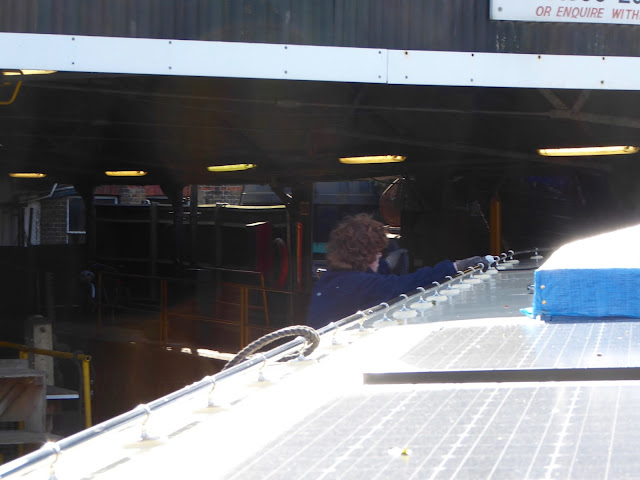 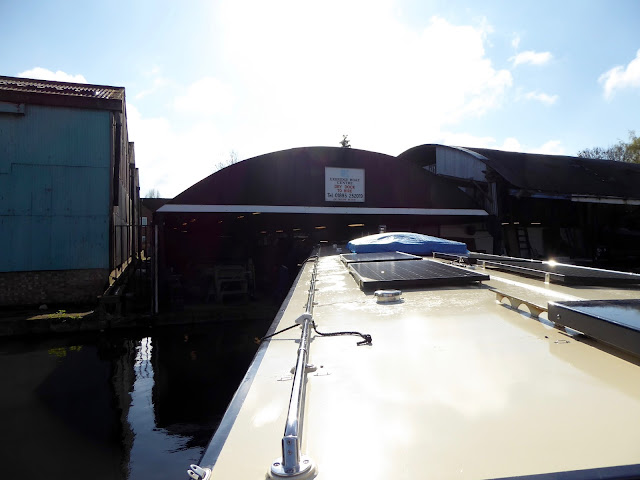 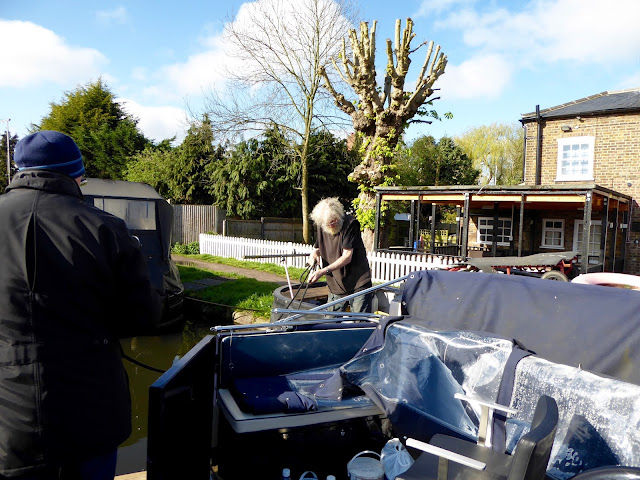 There are moorings opposite (not sure if visitor or longterm) and there was no escaping touching this boat.  The owner was not at all phased and came out to take a rope and pull Still Rockin’ round. 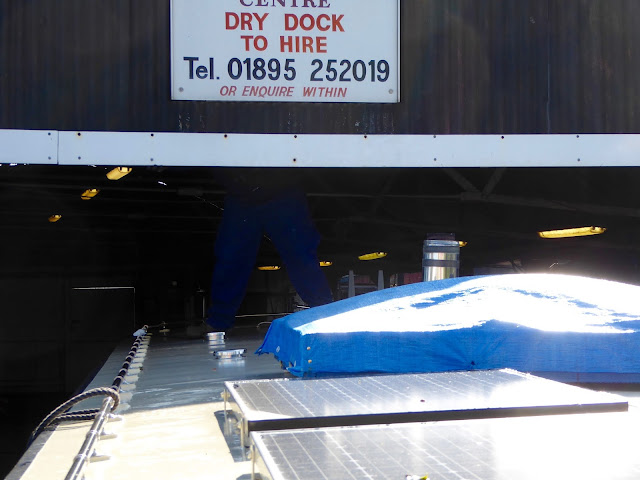 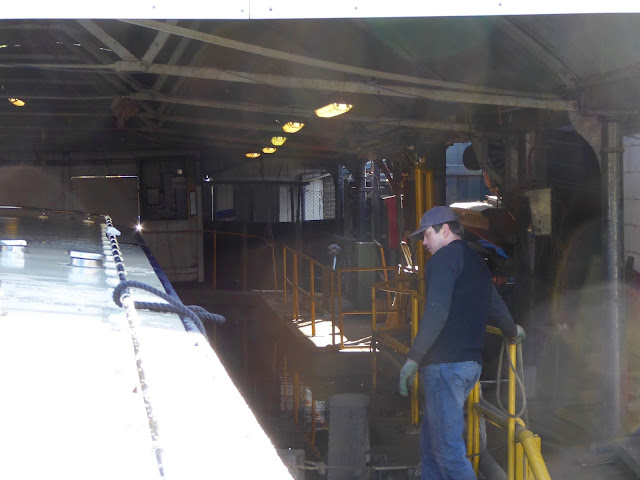 He’s holding the dock/lock gate open and guiding her away from the concrete edge ... 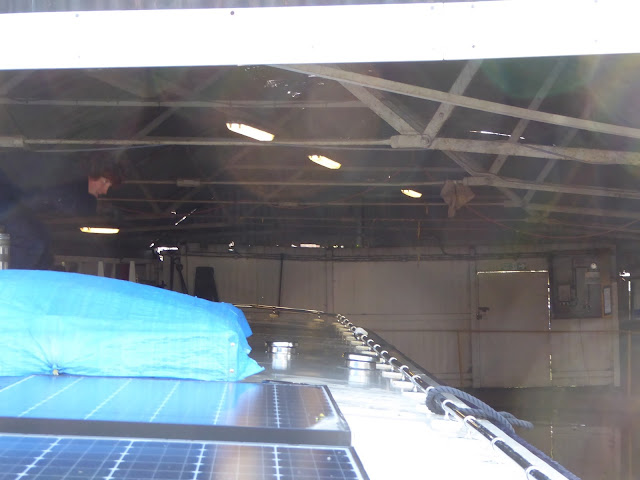 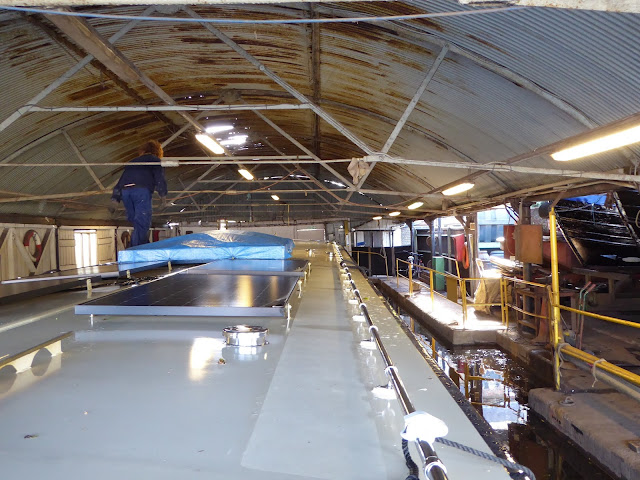 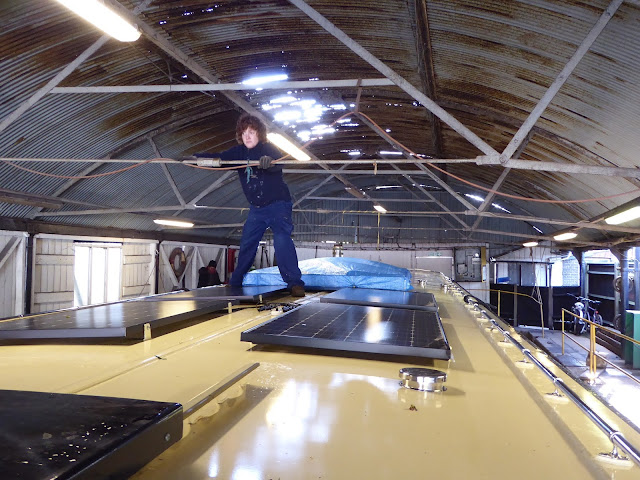 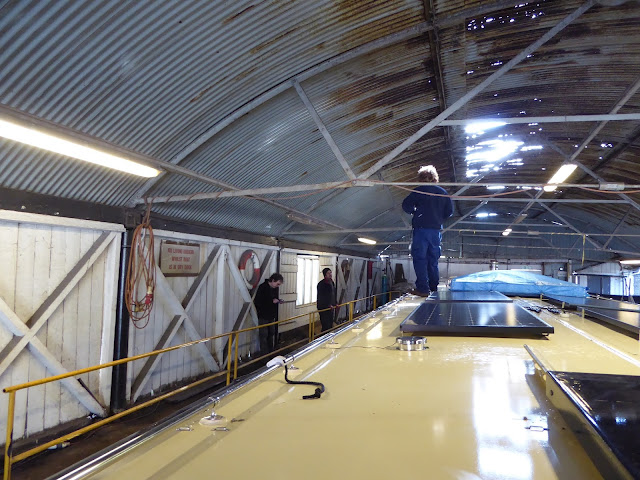 Here he’s tying together our middle ropes to fasten to the railing to keep the boat still whilst it descends as the dock empties. (We only have short middle ropes as Still Rockin’ is too heavy to take a long middle line off from the back to bring her in to moor up.) 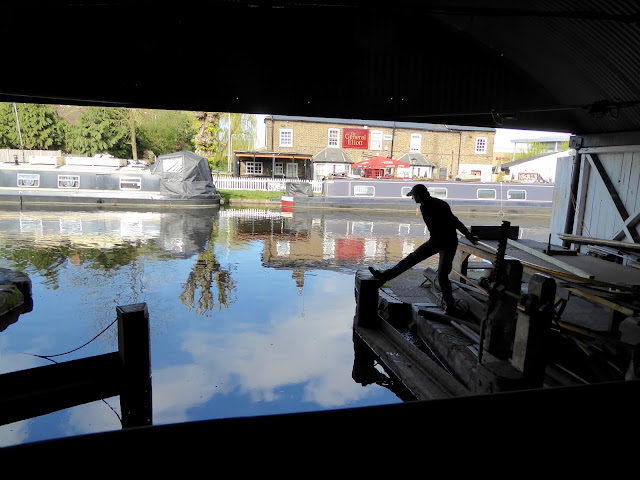 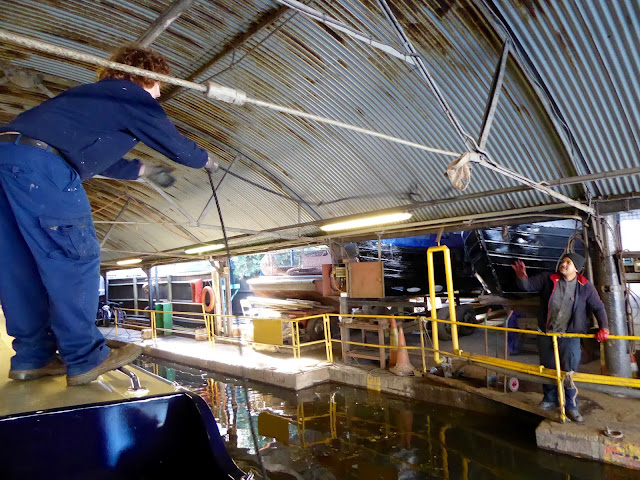 A good throw, this rope was also used to stabilise the boat and they also used one at the front too. 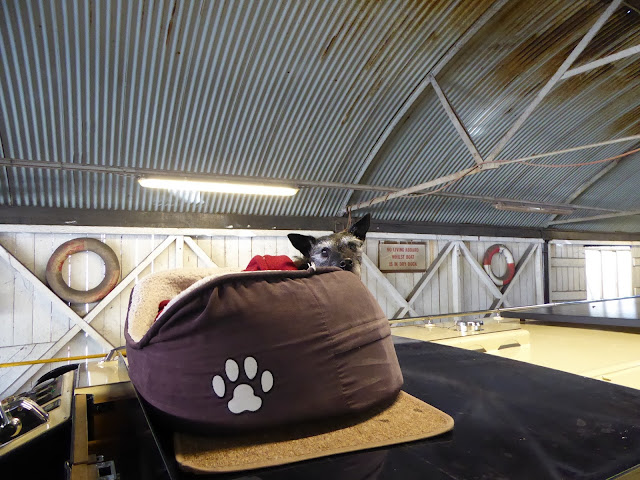 What’s going on? Just keep the noise down I’m trying to sleep! 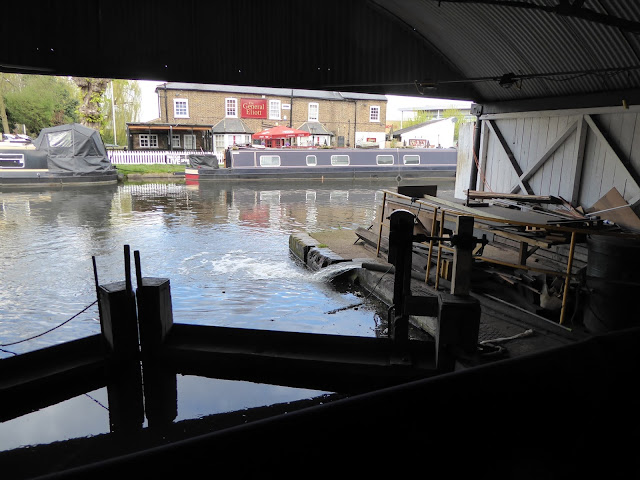 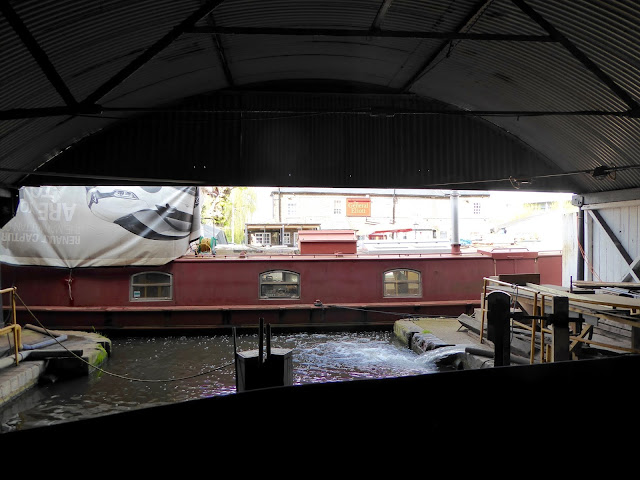 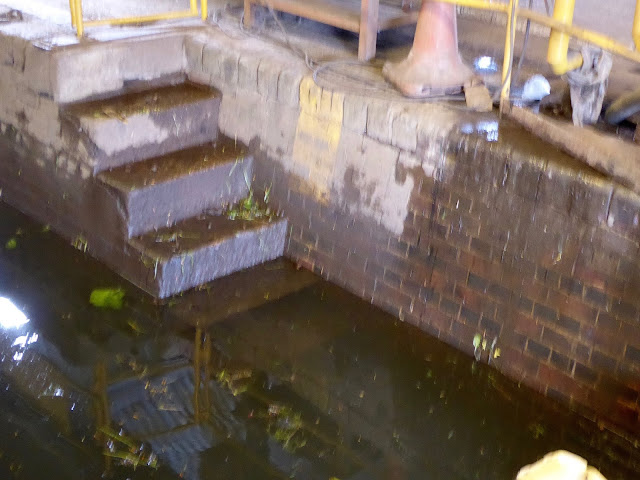 Unfortunately the pump failed a couple of times and it took a while to get it sorted, it was now 11:30 but we’re nearly there 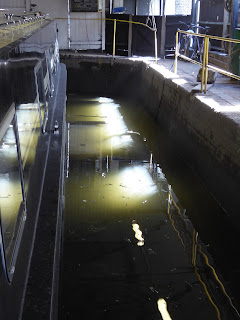 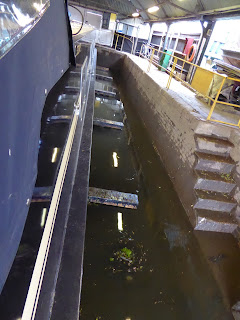 11:50 and we can see the plinths on which Still Rockin’ is sitting 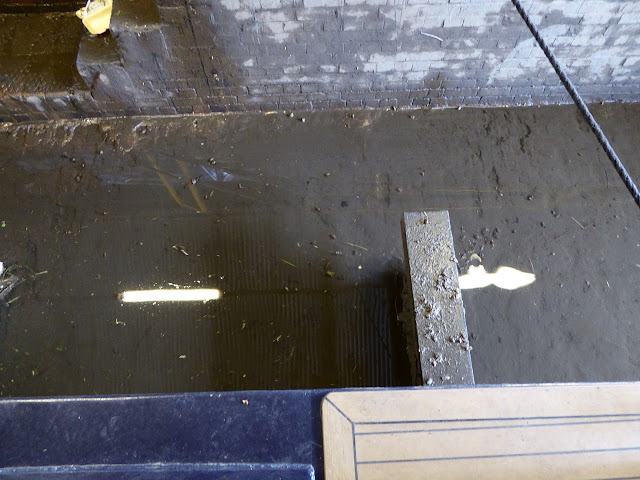 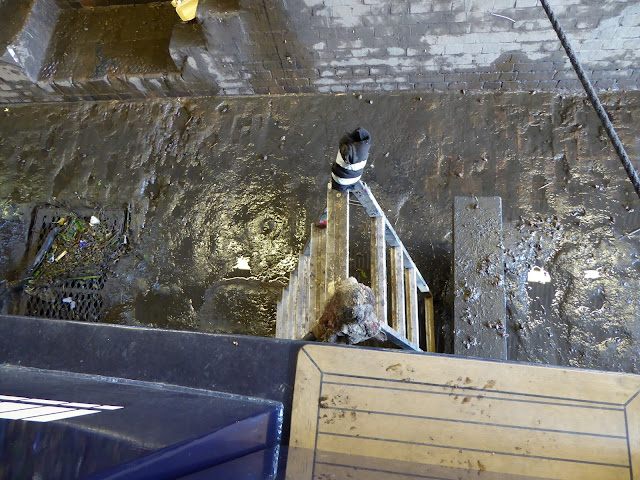 We rang the office to let them know and our escape route arrived...  George has since secured the steps to the boat. 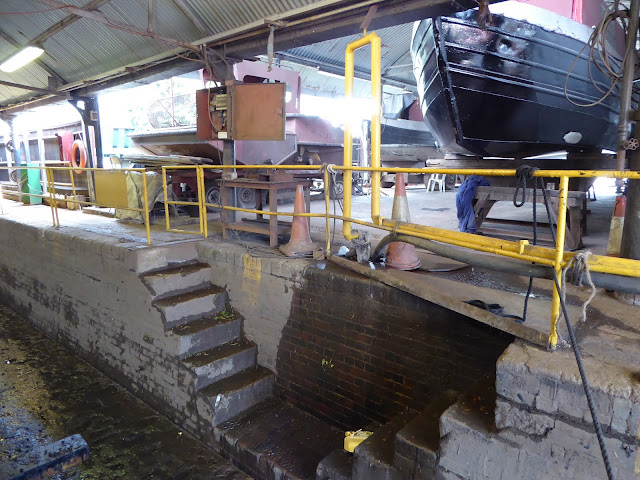 During this time other boats were being craned out and we could hear the jet-washer being used so we didn’t expect to be using it for a while and we took the opportunity to get warm inside for lunch and several hot drinks. 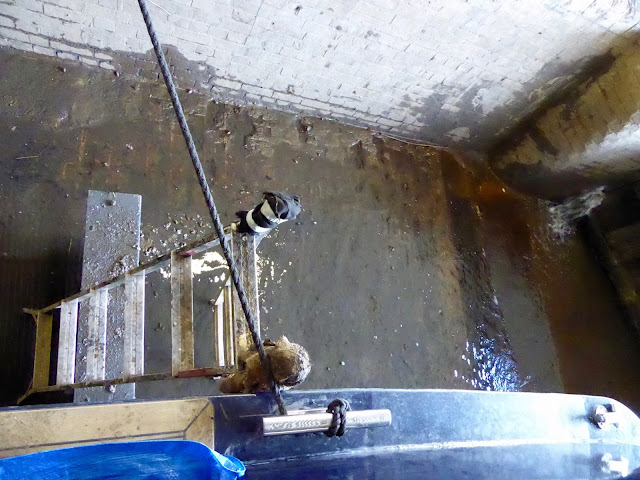 At 3pm we noticed that the gates were leaking, water was coming in and we needed the pump started again 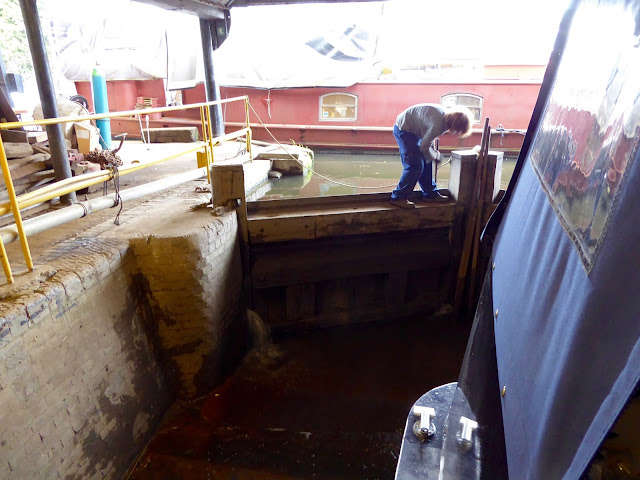 … trying to stem the leaking gates.
The pump should have been set to automatic but the problem was soon fixed. 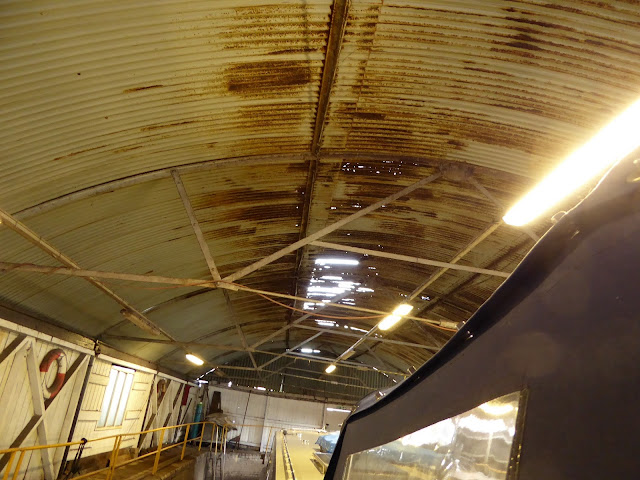 Glad those holes are over our roof so we shouldn’t get too wet  if it rains whilst blacking the hull and repainting the gunwales.

It wasn’t long after that George managed to jet-wash the hull which took less time than he expected as there is only 24 inches of Still Rockin’ under the water (Rock n  Roll, our previous narrowboat) was about 31 inches below the water line).

George checked all around the hull and apart from a few rust spots all was in good order. Alan the owner came to apologise to George for the delay, the member of staff who usually oversees the dock was off and the younger guys helping today were still learning the ropes.  We didn’t mind as the first day of blacking in our experience is always the same!

That was enough done for the first day.  No tv signal in here so we spent the evening catching up on the serial Ripper Street previously recorded, that should last us for the next few evenings.
Posted by Carol at 09:57

It will still take about the same time although 7" shallower the stern is twice as wide!..