... it certainly felt like it yesterday, it was freezing with a gusting cold wind of +50mph and snowing too ...

George had and appointment with the Apple Genius Bar in Reading at 12:15 and I was going to go into Henley for a few bits and pieces but when we got to the bus stop a chap stopped to tell us that there had been a nasty accident on the route between us and Henley involving several vehicles and no traffic was being allowed through.  What to do?

We could easily walk into Henley along the river path, about 2½ miles but I didn't fancy walking both ways with a bag of shopping on the way back and we didn't know if buses coming this way from Reading were returning there.  We returned to Still Rockin' and made a decision.

I would go to Reading with George, we would walk into Henley to the train station to catch the train to Reading, I would shop whilst he was in the Apple shop and hopefully the road would be open again by the time we were ready to return home.

I changed into my boots and we headed off over Hambleden weir bridge and the Thames path towards Henley.  There are large areas of open ground as we walk and the frigid wind and snow was blowing from our left, the wind factor against our faces must have been at least -5° and it took us about 50 minutes to reach the station where we had to wait for half an hour for the next train changing at Twyford for the onward train into Reading.

All went well except that it took over 2½ hours for George's computer to be updated (it has stalled upon installation at home and then only gave the option to install the system present when it was purchased back in 2011).  By that time it was after 3pm and we were starving!  We had lunch at Jamie's Italian and headed to the bus stop where we were in luck ... partly!  The bus was running but only to Henley as the road passing Mill End where the marina is was still closed...

... so another 2.5 mile walk with the wind and snow (it had kept it up all day) now in our faces.  Wooly hats on pulled down to our specs, hoods up and chins in our collars we wended our way home.  The fire had gone out (I'd only expected to be out for an hour or so) and it was a while  and a couple of cuppa's later before we properly thawed out.

The day ended well though in the good company of friends Karin and Peter in a nice warm boat with lots of 'nibbles' and the odd alcoholic drink consumed.

Today ... we woke to snow, lots of it ... again an outside temperature of 0° but with the 58mph gusting wind blowing the snow from the trees, feels more like -5 once again. 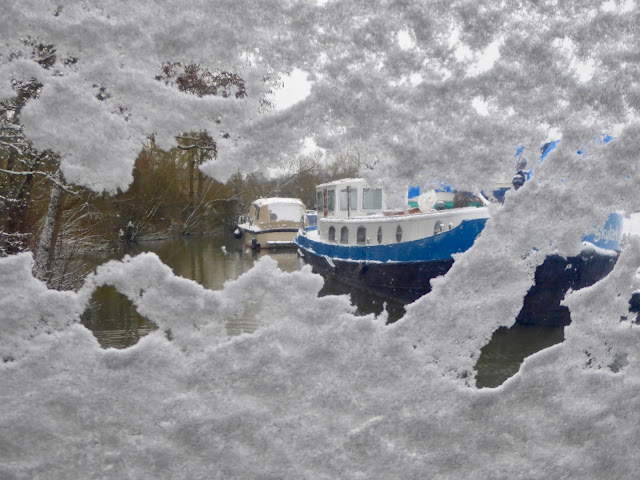 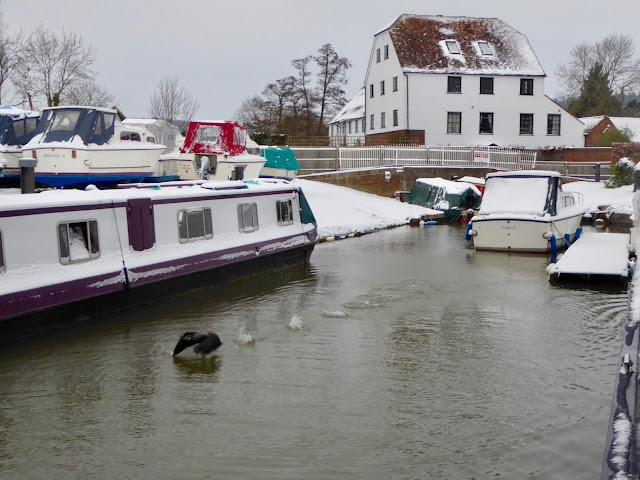 That's a cormorant taking off! 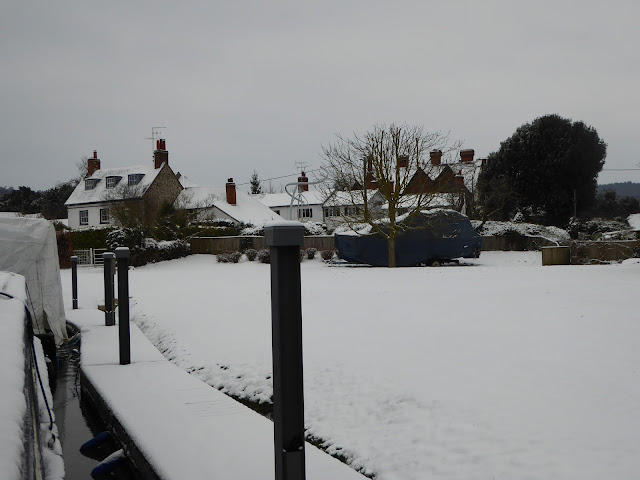 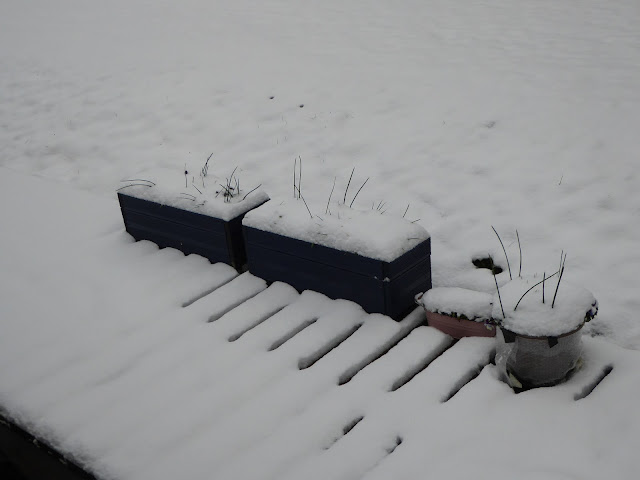 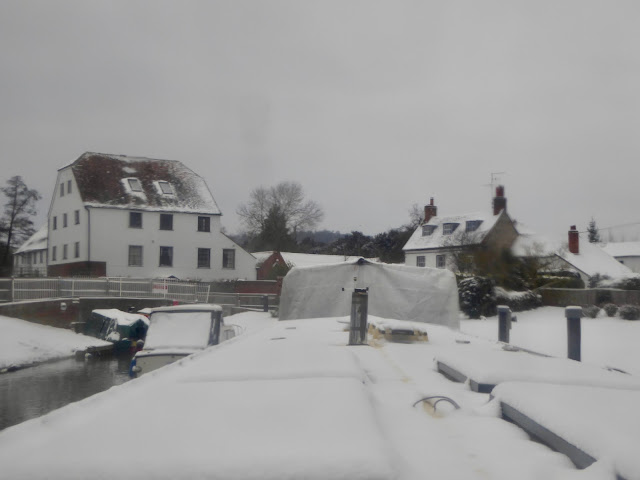 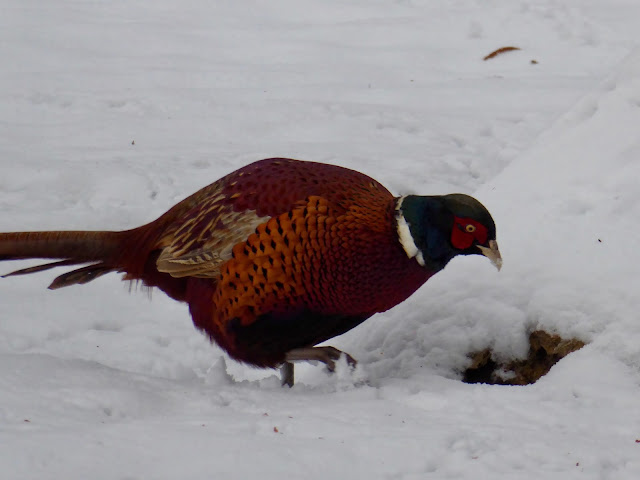 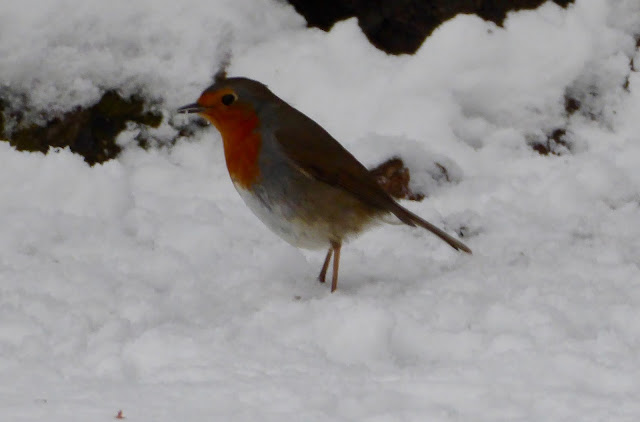 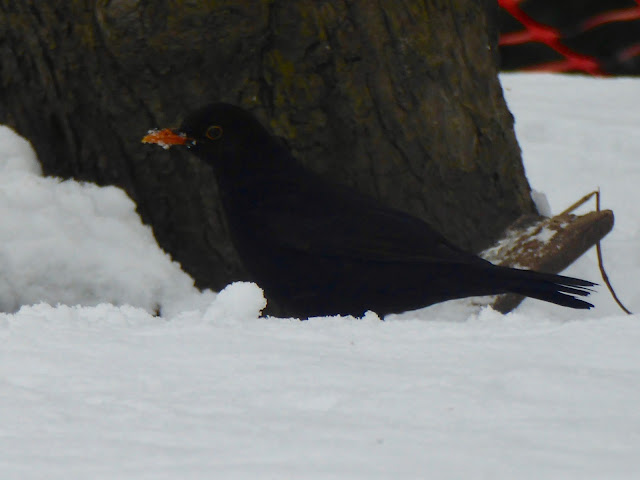 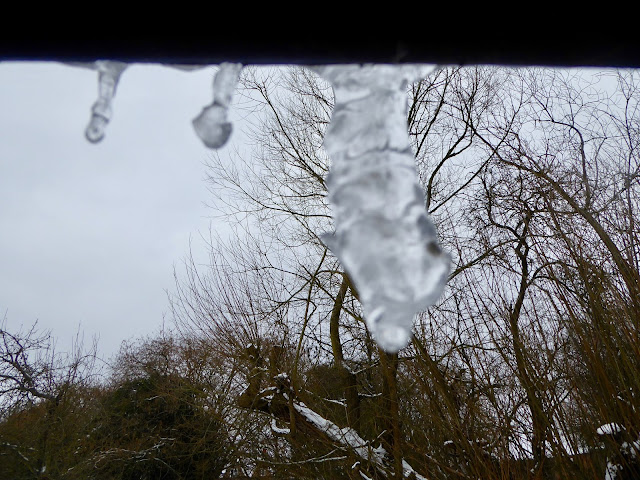 Icicles from the stern canopy dripping 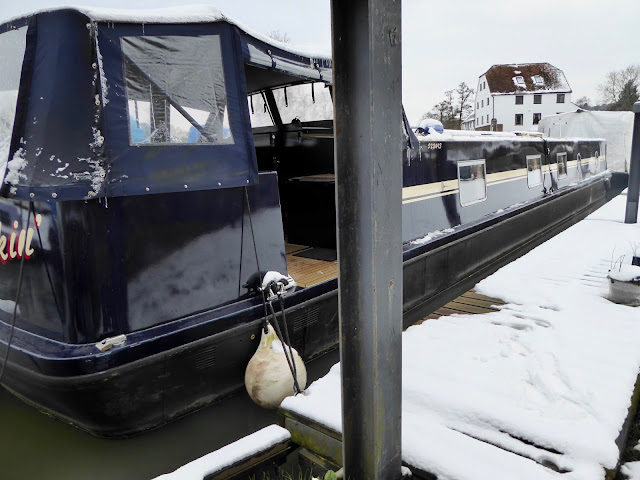 Hope that the weather wherever you are is not too bad and that you're warm and safe.

Now looking forward to a relaxing day (roast lamb for lunch) and visitors tomorrow.
Posted by Carol at 11:46

What a day Carol! At least you are safe and warm now. How do you stop your glasses steaming up when you wrap up? I always have to loosen the wrap or walk blind!X

Hi Hazel, I think it was probably because the wind was blowing into our faces and even behind our glasses so they didn't steam up. Mind you when we got to the waiting room at the railway station they did! x

Poor you, Carol! What weather! You’ve had much more snow than us. I’m don’t envy you having to trudge through it all. Gorgeous photos! I feel so sorry for the birds. Keep warm...I hear it will be better this week.

Thanks Val, things have now improved, the snow has mostly gone and the days are set to become a little warmer but still with very cold nights ... but we're staying positive ... spring and summer is coming ... we hope!