Still on tour in Oxford ... Harry Potter too

... with an official guide 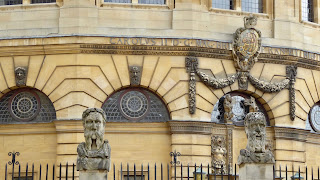 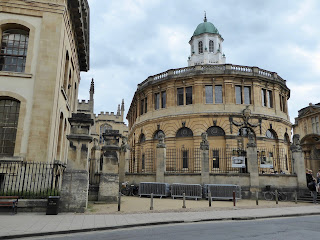 As we walked our guide Leigh reminded us to alway look up and pointing out the busts of philosophers on the piers surrounding the Sheldonian Theatre.

In 2007 school children were encouraged to submit ideas for new 'grotesque' sculptures to replace some of the crumbling ones on the Bodleian Library which were unveiled in 2009 ... including 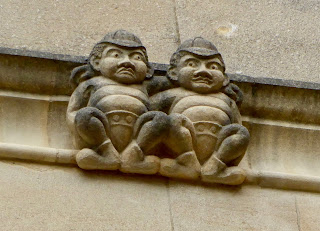 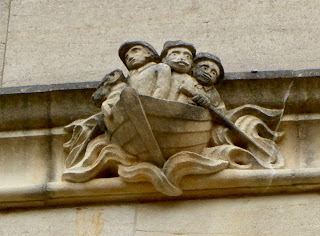 ... Three Men in a Boat, Tweedledee and Tweedledum among others 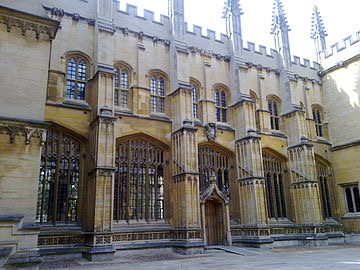 The Divinity School (Great Hall on the ground floor and Duke Humphrey's Library above) is attached to the Bodleian Library building.  Built in between 1427-1483 it is the oldest purpose-built university building in Oxford specifically for lectures and oral exams in theology. 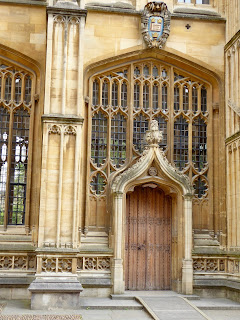 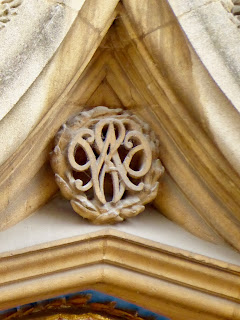 The external door was added in 1669 by Sir Christopher Wren for access to the Sheldonian Theatre.  The boss above the door bears his initials.


Academic degrees date from the second half of the 12th century.  Oxford academic students who have passed their final exams receive their degrees at The Sheldonian Theatre where the whole proceeding are conducted in latin including the speech given by the  Public Orator. 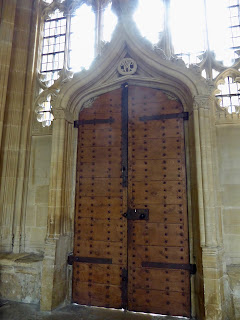 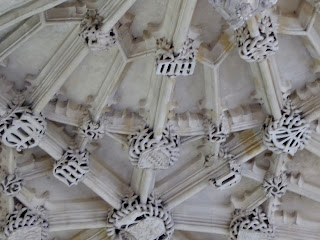 Inside the Divinity School ... Sir Christopher Wren's door and a wonderful ceiling 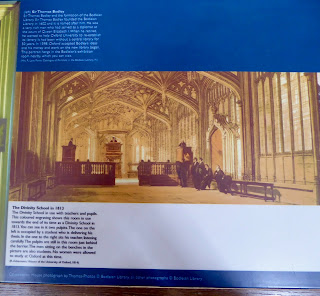 The information board explains the use of the two pulpits (1813) you can see in my photo above (left behind the chest and to the left of Wren's door on the right).  In the past, Pupils would have taken their oral exams here. The pupil would stand in the box on the right to deliver his thesis and the teacher would sit on the right listening.  Other pupils may be in the hall at the same time.  This type of exam (Viva (viva voce) is still used today especially at the end of a DPhil course.

And Harry Potter at the Divinity School ...

The Philosopher's Stone  ...  This famous hall with its classic gothic vaulted ceiling was used as Hogwarts Infirmary.  Harry ends up here at the end of the film after his confrontation with Voldermort. 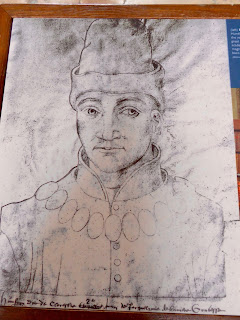 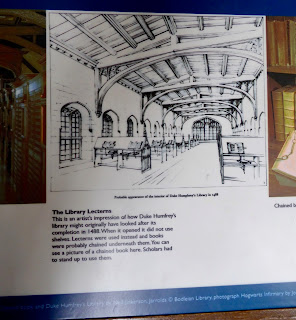 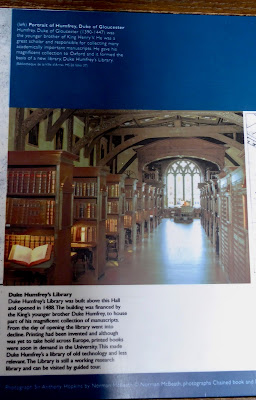 The Duke Humphrey's Library is the oldest reading room in Oxford and the information boards show Humphrey, Duke of Gloucester (1390-1447) who was the younger brother of King Henry V and who was responsible for the finance and collection of rare, important manuscripts which eventually formed the basis of this great library in 1488. (click on any of the photos to enlarge).

Unfortunately a visit to the library was not part of our guided tour today. 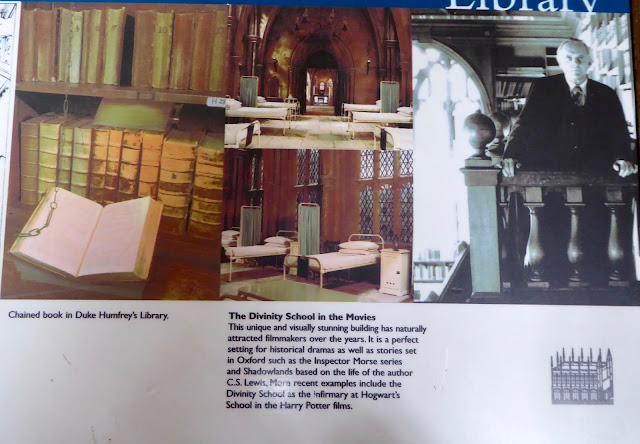 And Harry Potter in the Duke Humphrey's Library ...

The Philosopher’s Stone   ...  Harry in his invisibility cloak looks for clues in Hogwarts library to be terrified by the monster in the book and then in real life by caretaker Argus Filch.

Readers will undoubtably know that the Inspector Morse series were film mainly in Oxford and include scenes taken within the Duke Humphrey's Library at Bodleian. 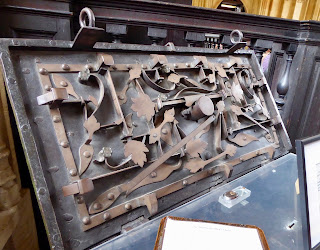 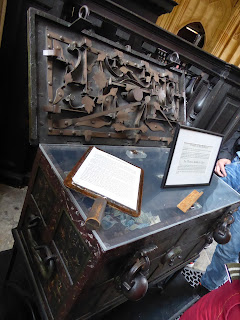 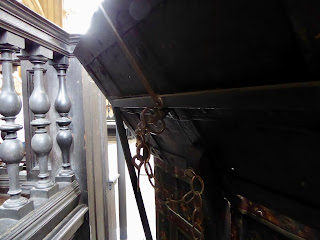 Sir Thomas Bodley's Chest has an elaborate mechanism of bolts operated by a key in the centre of the lid. 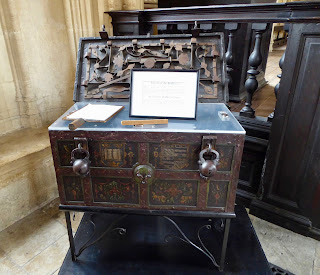 This was his personal strong-box and contained the deeds of his properties and endowments and was mentioned in his will.

The University decreed in 1613 that the chest be kept at Corpus Christi College but it was brought to the Library in 1622 and used as a safe until as late as 1774.  It is currently used to take donations from visitors and the funds used to purchase rare books and manuscripts in addition to ordinary funding.

Only two other Oxford colleges were used in the Harry Potter films ...


New College in the Cloisters

Goblets of Fire  ...  Harry has fallen out with everyone and comes face to face with Malfoy sitting in the tree. Malfoy is then turned into a ferret in front of our eyes to the annoyance of Professor McGonagall.

Christ Church at the top of the stairway ...

In the Philosopher's Stone Harry, Ron, Hermione and the other ‘first years’ walk up the grand stairway to Hogwarts to be met by Professor McGonagall under the magnificent gothic vaulted roof. It is here also that the three are reunited at the end of the film

Christ Church at the bottom of the stairway ...
In the Chamber of Secrets ... Harry and Ron fly into Hogwarts in their Ford Anglia, climb these stairs and come face to face with Argus Filch. It is also the location used for the first meeting between Harry and Tom Riddle.

Christ Church's Cloisters.
In The Philosopher's Stone ...  Hermione shows Harry the trophy his father won as a seeker in Quidditch. The scene was shot just outside the current bookshop.

Christ Church's Great Hall ...
One of the most famous rooms in Oxford became the inspiration for Hogwarts Dining Hall for all of the Harry Potter films. A studio set was created from photographs of the Tudor Great Hall and used in several film shoots with a few differences.

Although it's taken a long time to write this posting (lack of internet and too busy walking our surroundings) I have thoroughly enjoyed doing it.  Hope you've enjoyed reading it too.
Posted by Carol at 12:18

Hi Guy's, another fascinating and informative description of what you see from your waterway journey along the River Thames and what a lot of us see!, but don't take the time to appreciate.
Keep up the good work (Carol).
Steve & Lynne Xx

Thanks Steve, glad you're enjoying the blog. Love to you both xx