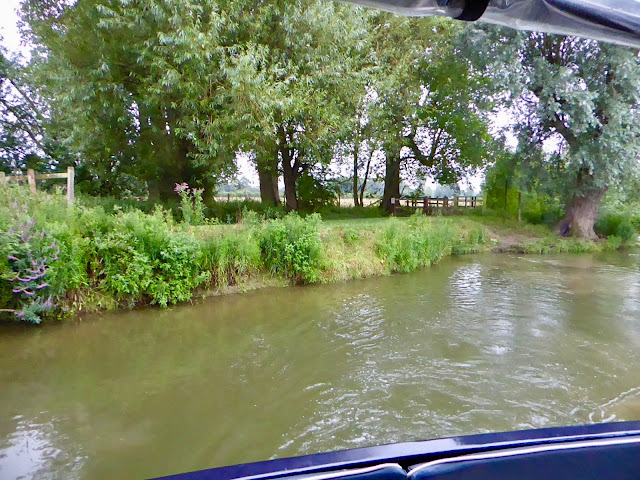 Leaving our mooring at Wallingford on Monday 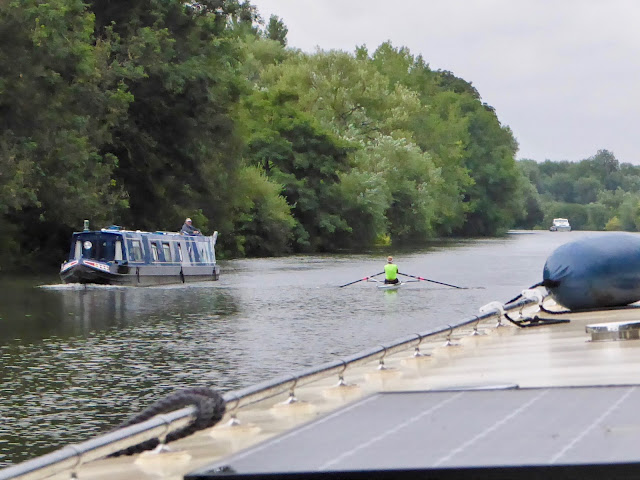 ... the river is getting busier each day 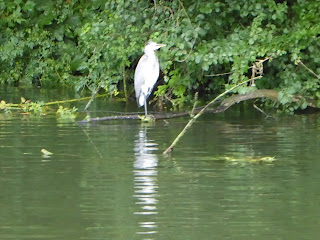 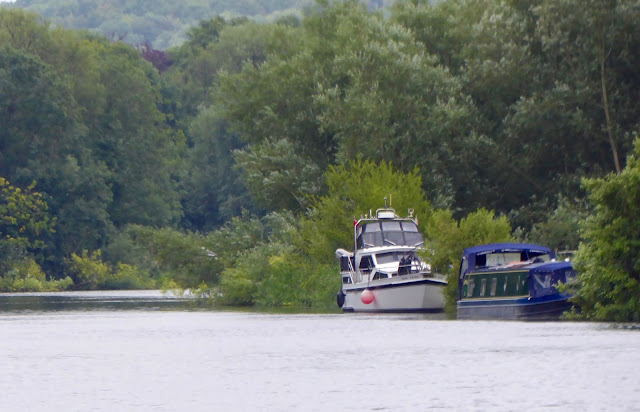 An hour later we spy in the distance very snugly moored 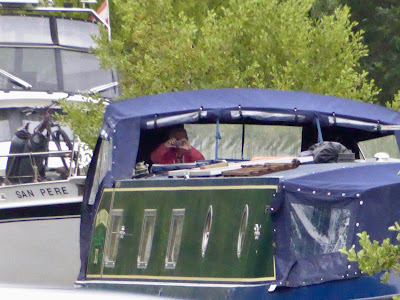 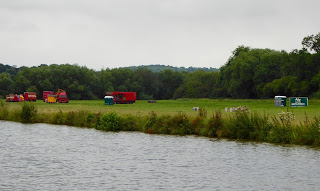 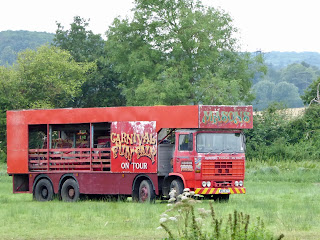 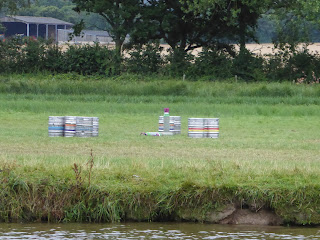 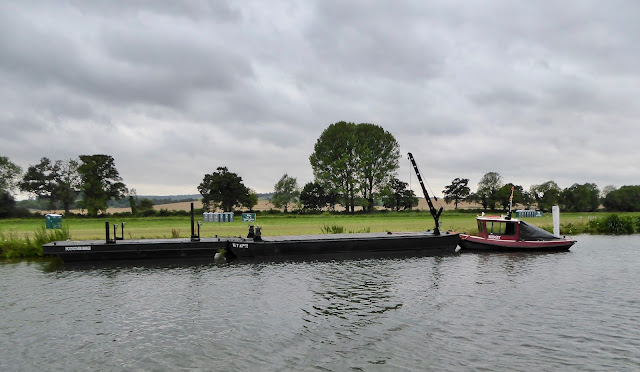 I wonder if tug Bridget has supplied the mobile toilets 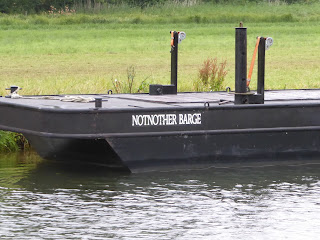 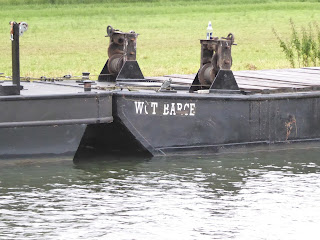 ... in Wot Barge and Notanotherbarge! 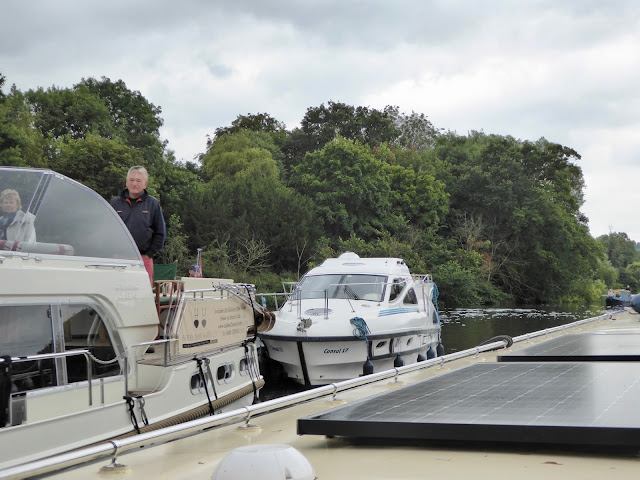 We stopped at Cleeve for water and whilst topping up the tank Sue and Vic went past us and I let them down the lock where there was a queue waiting to come up. 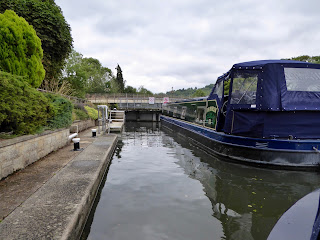 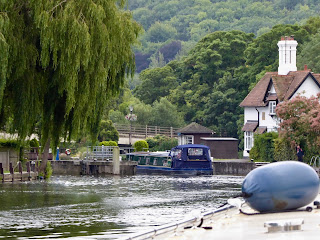 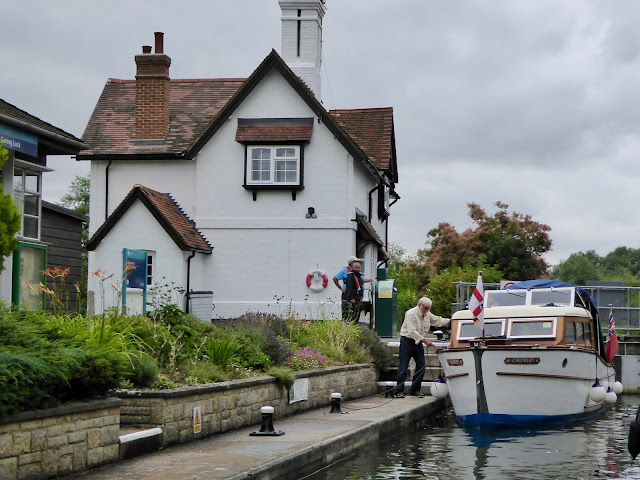 ...and also with Dunkirk boat, Chumley which was owned by the comedian Tommy Trinder 1939-1949.  Click on the link above to read a couple of funny stories about the times he and his brother Fred spent on her. 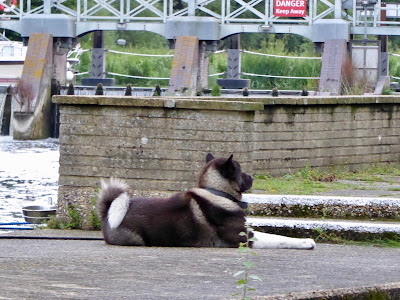 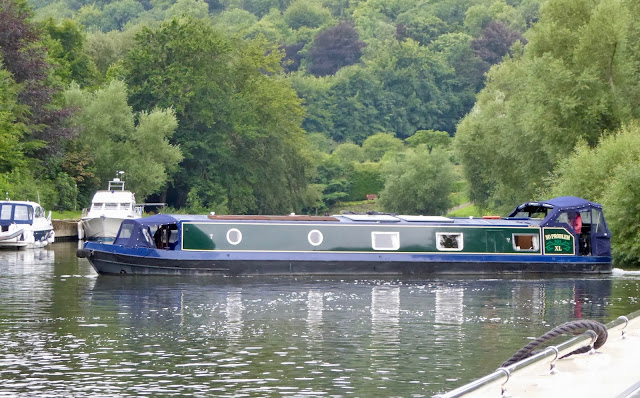 Sue winding NPXL onto the visitor moorings below the lock 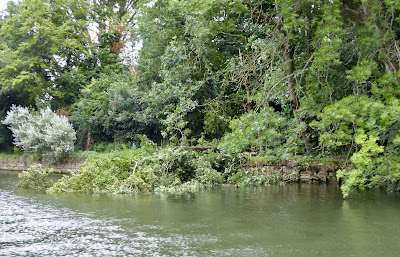 Tree down and being removed piece by piece 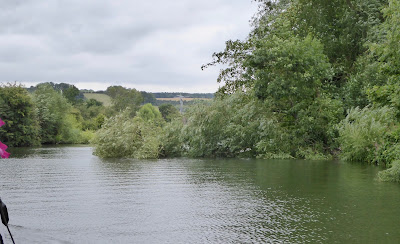 ... and another recent fall 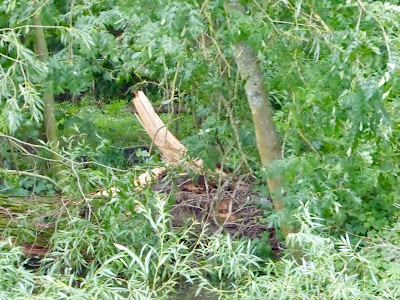 ... the break being very fresh 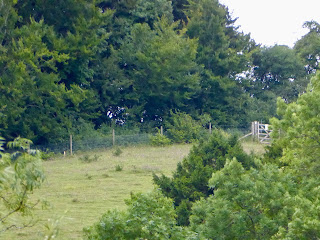 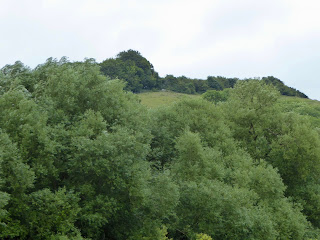 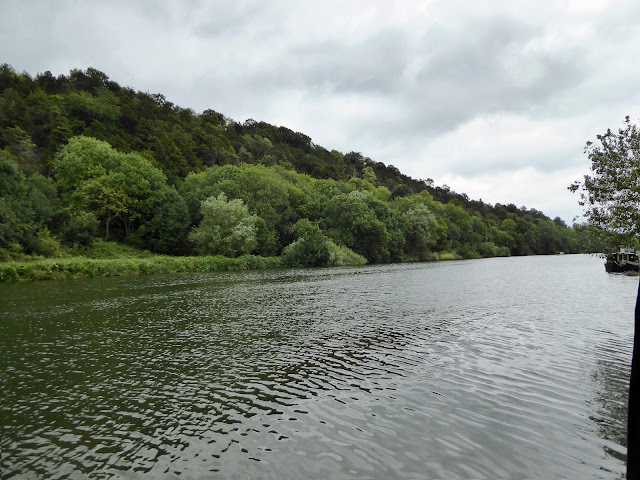 Moored up at Beale Park 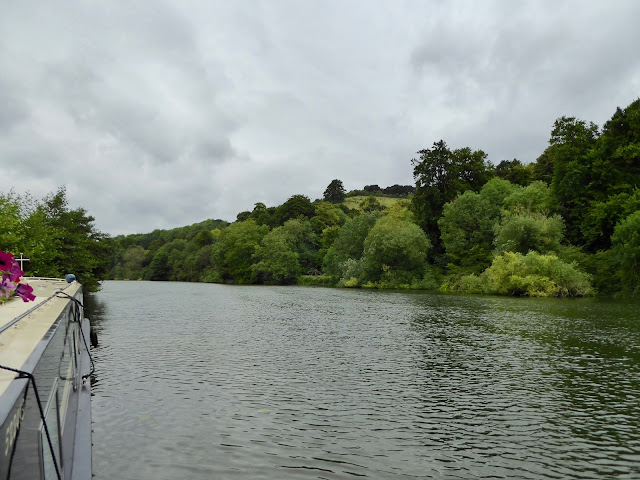 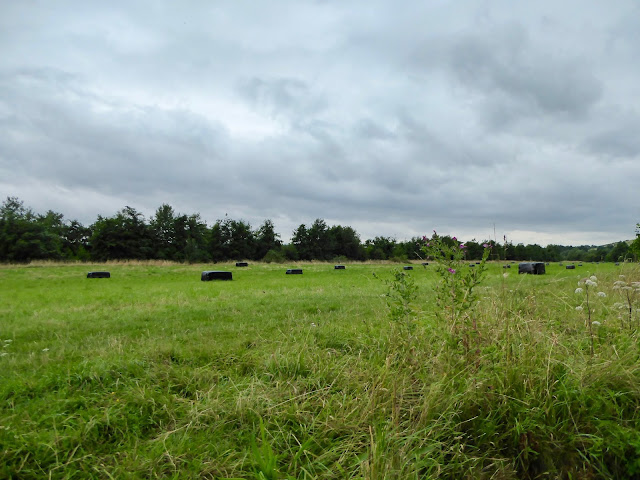 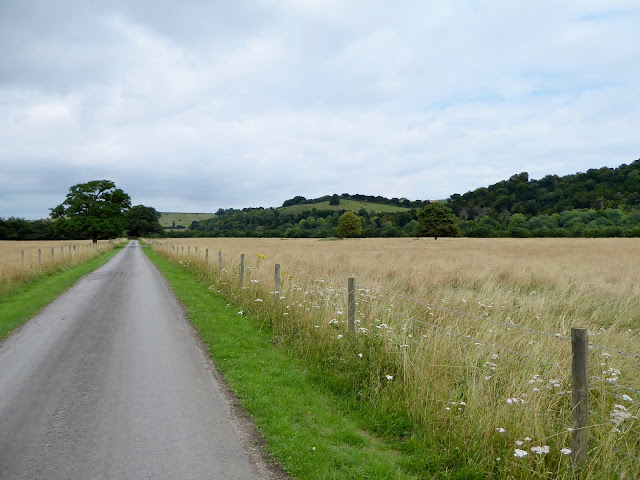 Off for a walk 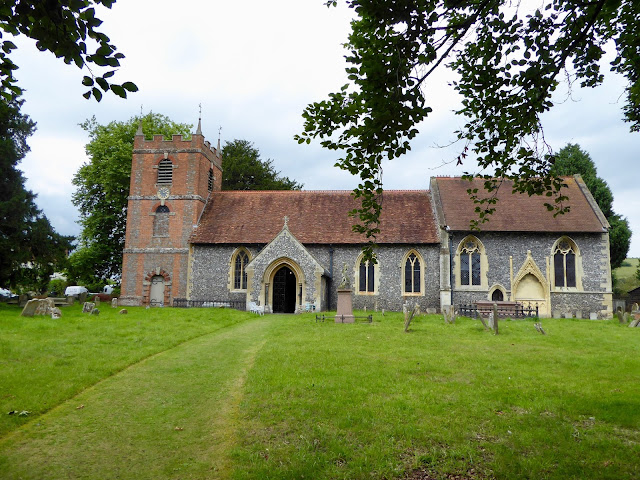 We usually pay a visit to St Bartholomew's Church and on previous visits have been lucky to happen upon various events including an art exhibition when we were invited to join a hog roast after the harvest festival but couldn't leave Molly to attend. Today there was a gathering from several local church groups to listen to a short talk on the history of the church and tea afterwards.  As usual we were welcomed in and really enjoyed the talk which included several anecdotes about people who lived or died here over the centuries.

I'll tell you just one of them ... a canny business man named Mr Sykes whose company imported kid gloves into England.  At the port of entry excise had to be paid and Sykes declared that it was too expensive and he would not pay.  The shipment was confiscated and the gloves put up for sale to the public at a very discounted price.  Mr Sykes purchased them back.  A while later another shipment arrived at the port and exactly the same thing happened, the goods were impounded and he purchased them back at a rate probably much lower than the excise duty would have been.

I said he was canny ... the first shipment of kid gloves were all left-hand ones ... and the second were all right hand ones.  No wonder no one else wanted to buy them except Sykes! 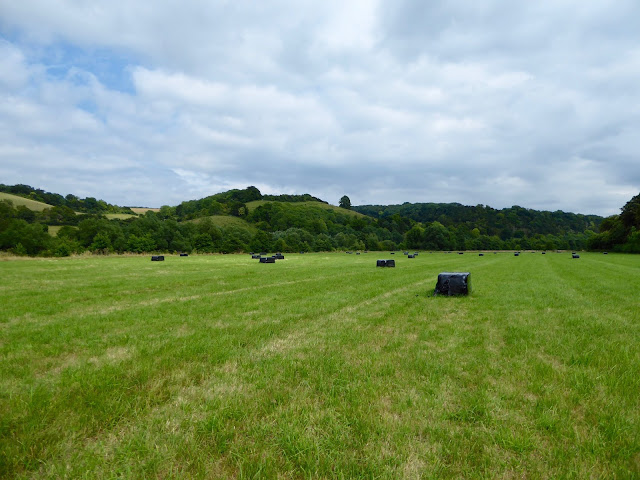 Walking back to our mooring 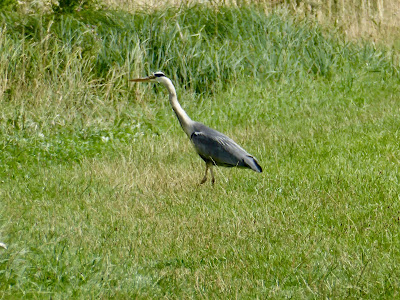 Well at last we are on our way to the Thames. Currently outside The Globe Inn after an 'acceptable' meal after 9 hours stood at the stern. Tired but happy days :)

We have a stop at Uxbridge Boat Centre who managed to fit us in for a front only crane lift to unjam our bow thruster (thanks George for the slipway suggestion but in fact there are even fewer of those that will take a fatbeam).

So assuming they fix us and I can get the motor unit refitted quickly... we should be on the Thames on Thursday 10am tide. Can't wait.

Your many wonderful pics help inspire us to be there again and I hope we get a chance to meet up somewhere.

Brilliant news! We'll be seeing you quite soon then. Take care. Regards from us both.