Just a couple of miles 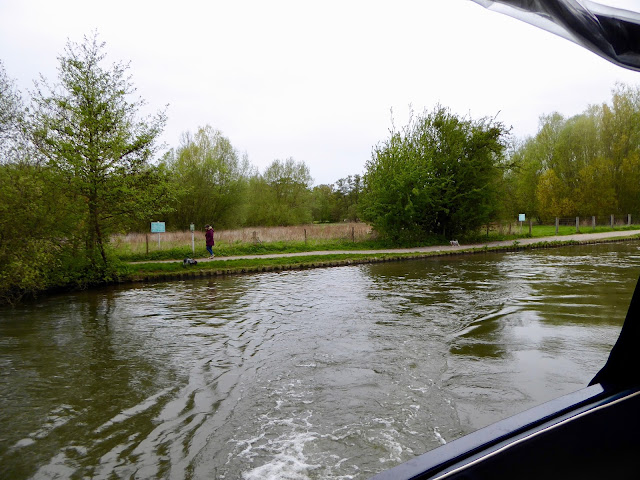 We pulled away from Marlow's visitor mooring at 10 yesterday 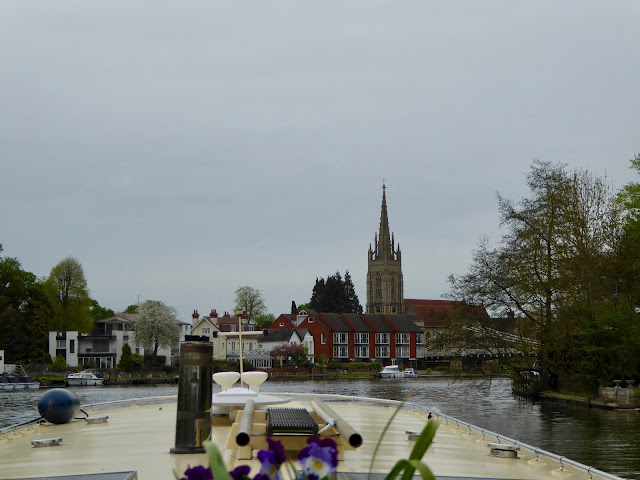 ... and again used the current to wind us downstream 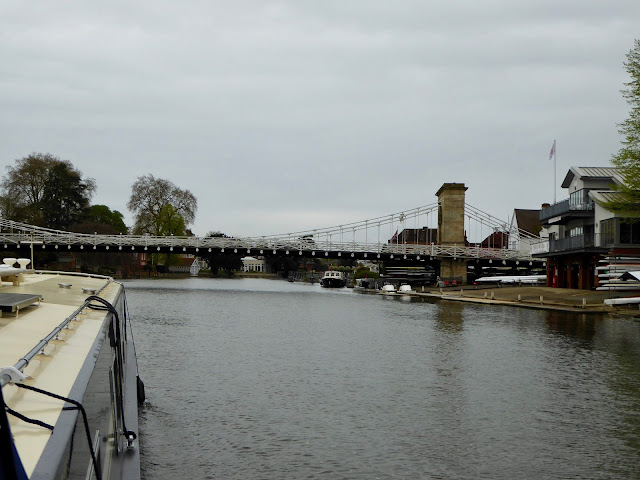 ... heading for Marlow Bridge and Lock 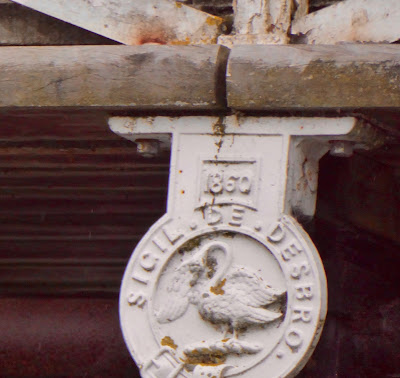 You'll see on the photo above these seals on the end of the bridge beams date back to 1860 when the original wooden bridge was built. 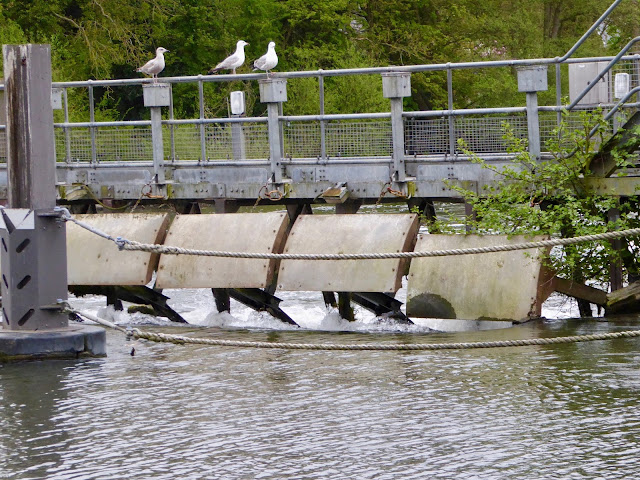 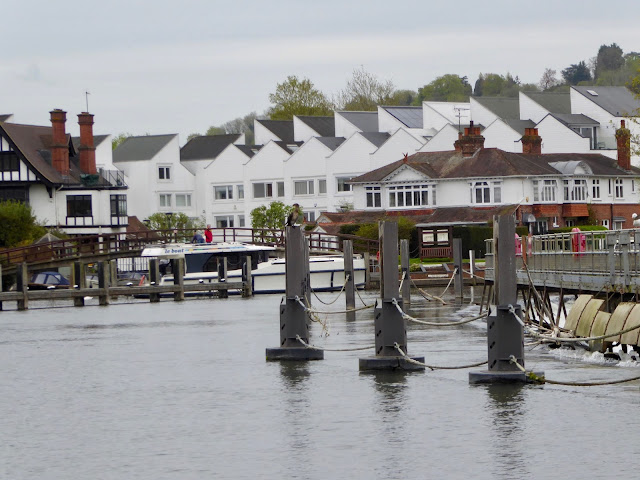 As we approach the lock we can see a very large Le Boat from Benson is on the lock landing.  We hoped to share the lock with them so George gently slid past their bow, dropped me off and reversed back to the landing you can see along this side of the hire boat (it's impossible to reach the lockside by foot from this landing).  I suggested that the Le Boat crew got back onboard so that they wouldn't have to stop after exiting the lock to pick them up and I would operate the lock.  They were dubious as to the length of the lock and would both boats fit.  George checked the length from our information and reasoned that of the 155' quoted 130 could be used safely and us being 62' and le boat 44' there'd be plenty of room. 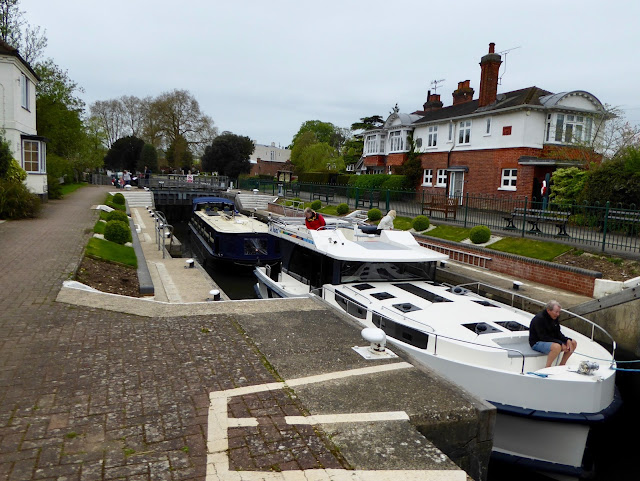 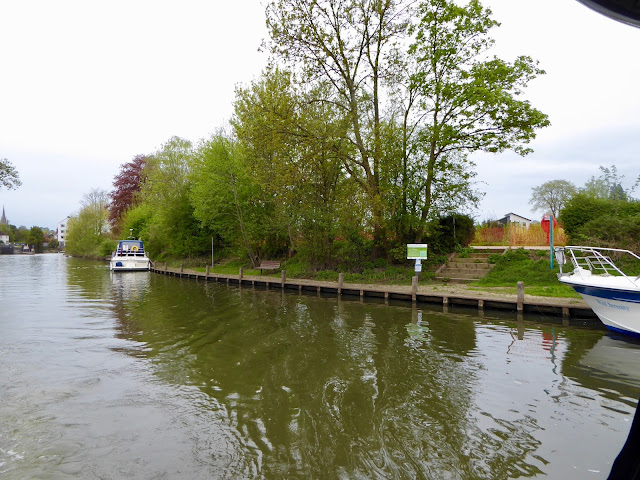 As we left the lock I noticed these visitor mooring were still accessible (flood prevention works are underway above the moorings) with access to the town via the path over the meadow. 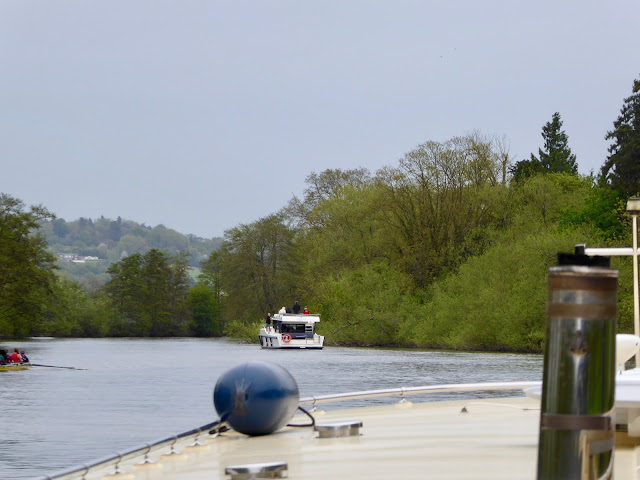 Although we were following quite a distance behind Le Boat its wake was making Still Rockin' bob up and down. 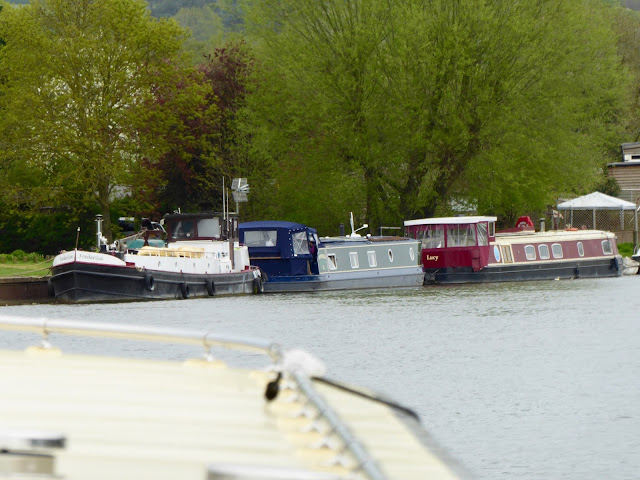 10 minutes later we have our destination in sight.  It is is of course No Problem XL moored at Bourne End and we pulled in abreast.  We knew that Sue and Vic are not onboard but that boat sitters Jill and Graham were.  After a cup of tea and a catchup we had a relaxed afternoon followed by a walk with them to The Bounty for our evening meal; a lovely meal and great company.  They will be leaving NP soon for pastures new giving Sue and Vic their home back in the next week or so once all her health appointments are sorted. 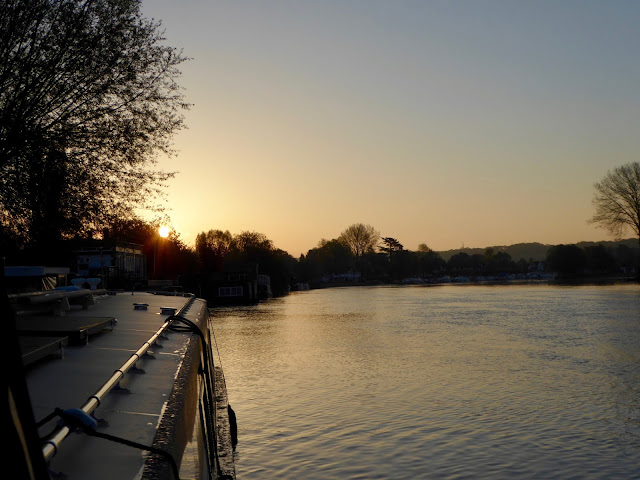 Sunrise this morning at 6am at Bourne End is looking good although the forecast for the day is sun this morning and rain later ... oh joy!  We're not going far though today ...
Posted by Carol at 07:27

Ooh how lovely that you saw Jill and Graham! That must have been a great afternoon. I am still hoping I will see them this year. Lovely photos and descriptions as always, Carol. I love the last photo. Despite the bad forecast, it was a lovely start!

It's always grand to meet up with good friends Val. Jill is also hoping that your paths will cross this season, whenever that may start for them. Take care.