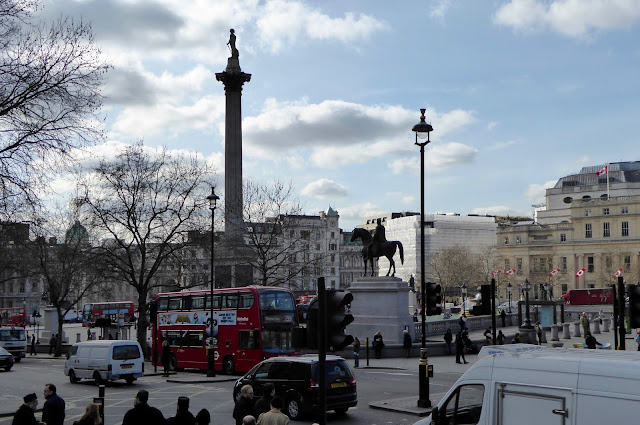 Trafalgar Square
Jaq introduced me to A Curious Guide to London some time ago and I purchased a Kindle edition.  Although I have it on my iPhone while we’ve been in London I keep forgetting to look at it.  So today Jaq I’m trying to do better!  Hence one of the reasons for coming to the famous square. 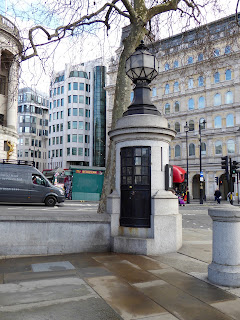 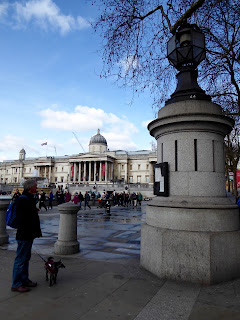 The Smallest Police Station in Britain built in 1926 to enable the Metropolitan Police to monitor demonstrations in Trafalgar Square, once a traditional centre for protests. It was created by hollowing out a stone lamp-post and installing narrow windows to allow the policeman inside to see over the square.  It had a dedicated phone line to Scotland Yard in case of emergency and the lamp would flash to alert other nearby police officers.  The police station was in use until the 1970’s but is now a broom cupboard for the Westminster Council cleaners! 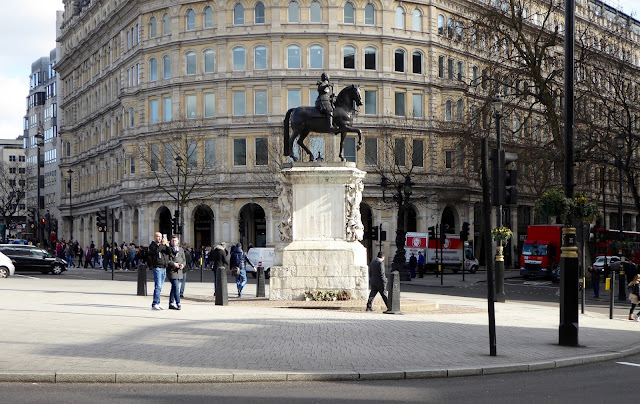 The Exact Centre of London - the Charles I statue on horseback erected in 1633.  A plaque confirms it is ‘centre of London’ giving distances from here to other cities around the world.  Among others …  Glasgow 389 miles, Rome, 1118 miles, Sidney 10500 miles and the moon 240000 miles! 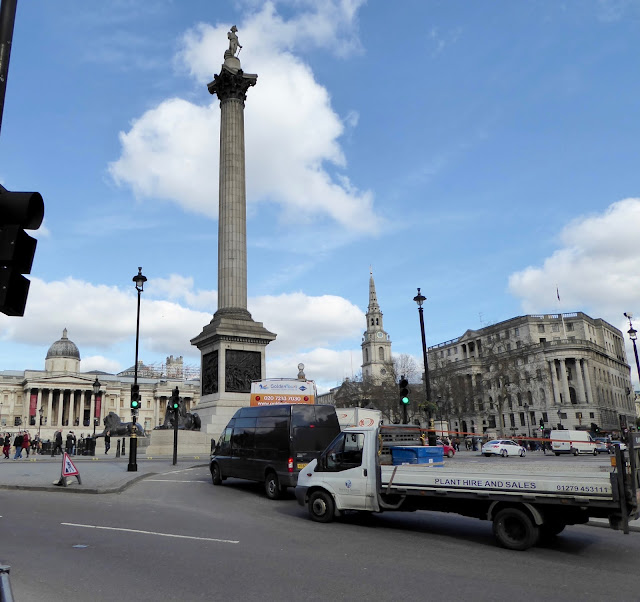 The main reason for our visit here today was to call at St Martin in the Fields (spire of which can be seen above) to book a concert for Thursday evening.  Ray and Diane (nb Ferndale) have very kindly offered to dog sit for us to enable us to attend. 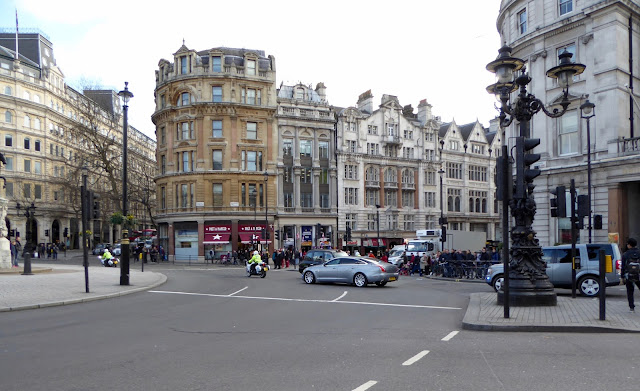 A bit of excitement when we heard motor bikes and whistles stopping the traffic escorting the prime minister through Admiralty Arch and perhaps to number 10. 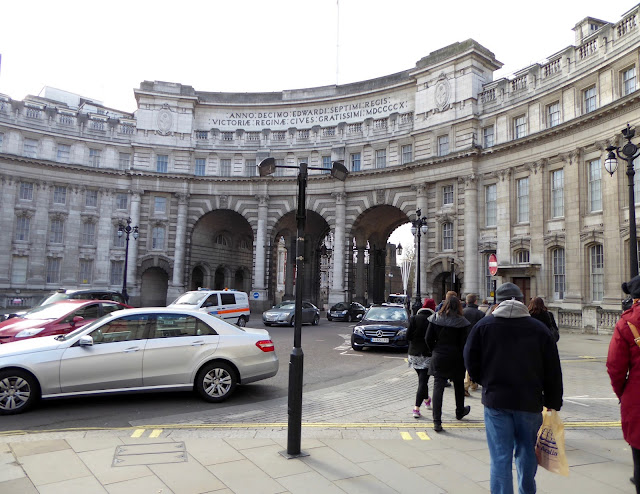 Admiralty Arch and Lord Neslon’s Spare Nose … this is said to be a second nose for Nelson’s statue incase the first one gets damaged.  The guide tells us that it can be found on the left-hand inner wall of the Arch, but which left? From this side? Or the other side? 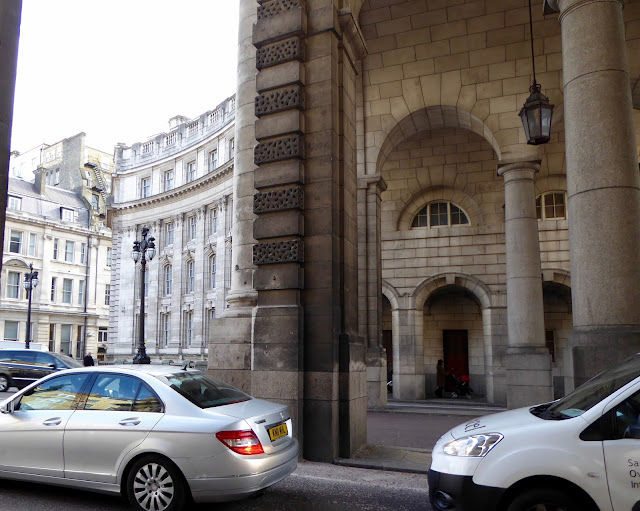 We managed to find it after crossing the road back and forth a couple of times.  It’s about seven feet from the ground making it waist height for anyone sitting on a horse.  Can you see it in the picture above? 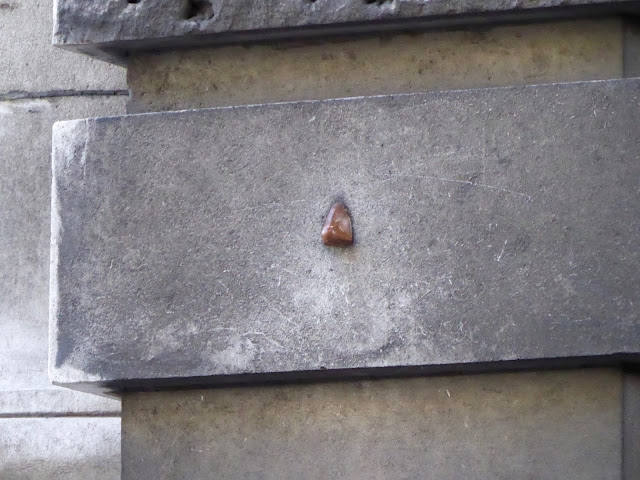 It’s said that the Horse Guards touch it as the pass so that’s probably why it’s so shiny. And the real reason it’s here?  You’ll have to read the book! 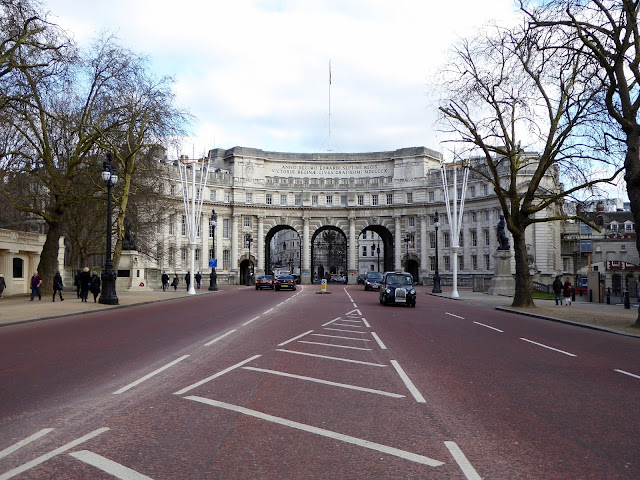 Admiralty Arch from The Mall 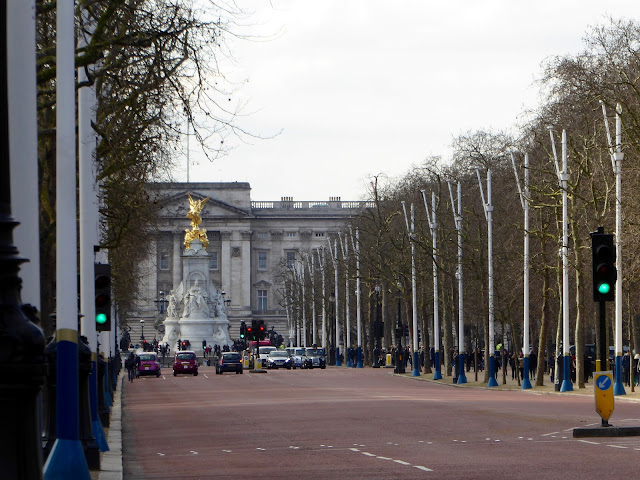 … and looking the other way down The Mall to Buckingham Palace 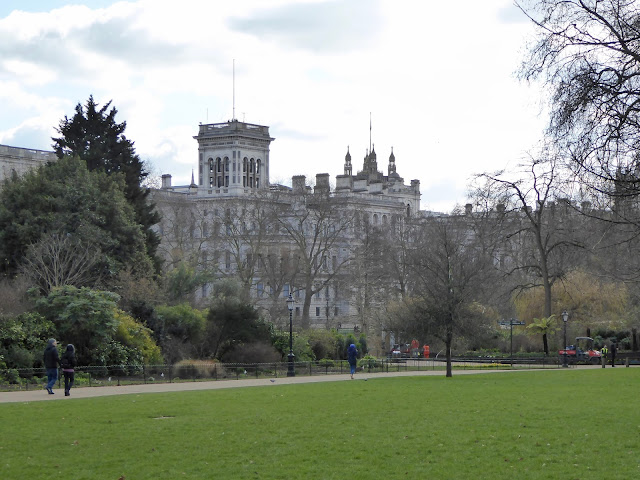 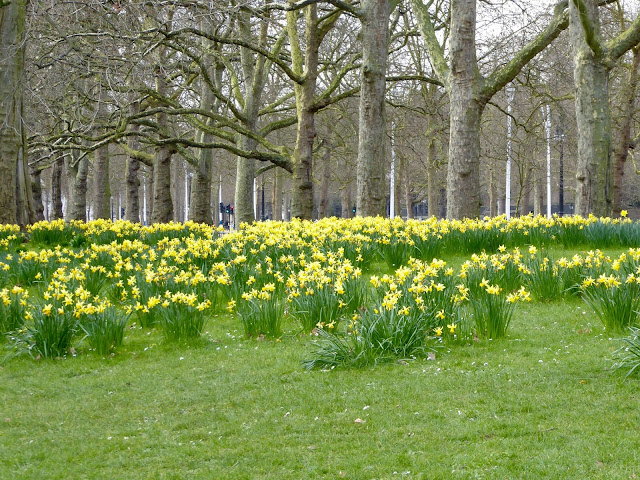 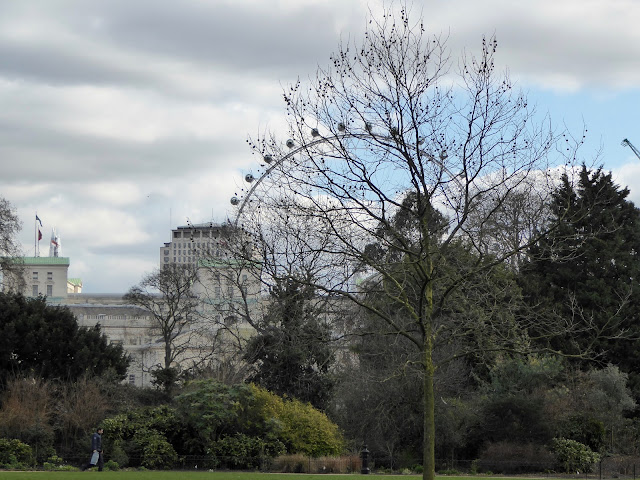 … and had our lunch 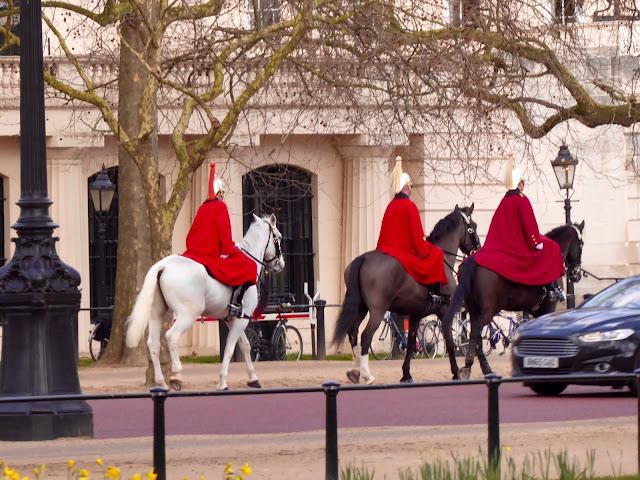 Horse Guards on The Mall from St James’s Park 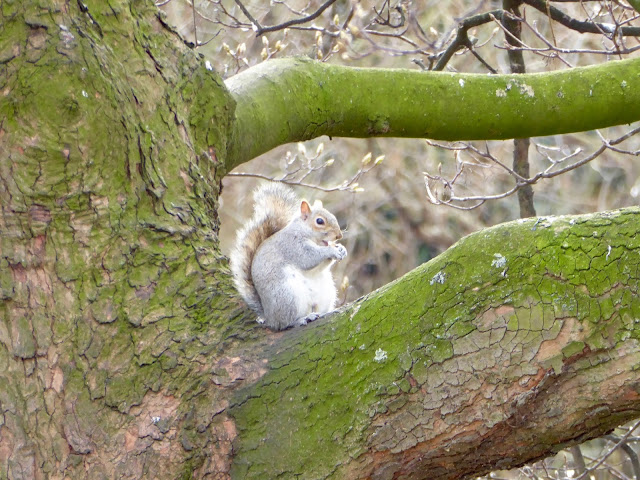 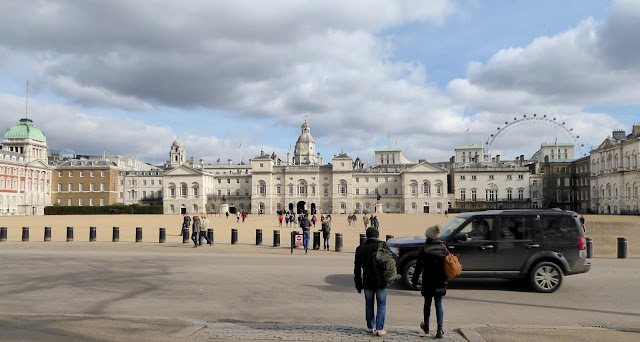 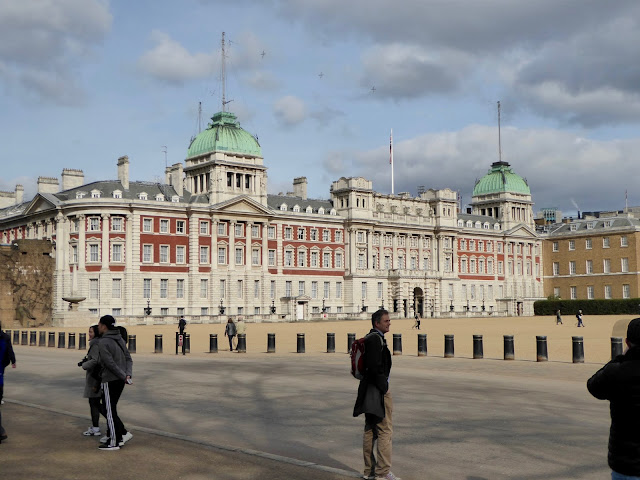 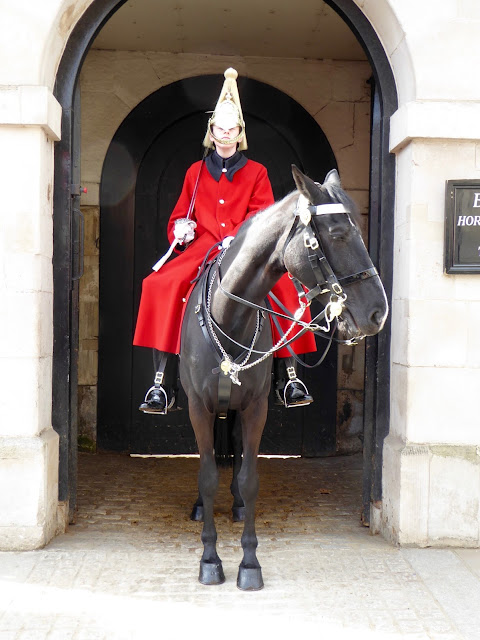 How old is he? Twelve? 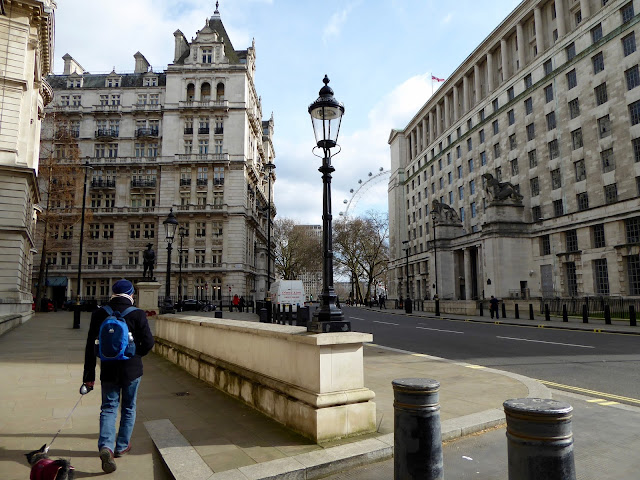 Whitehall Court with the Ministry of Defence Building on the right 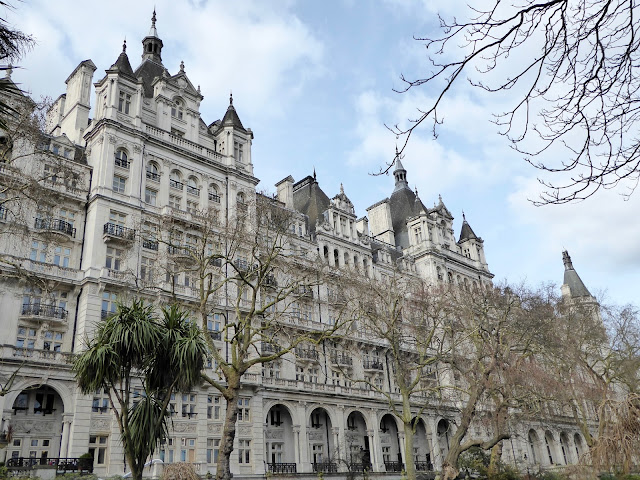 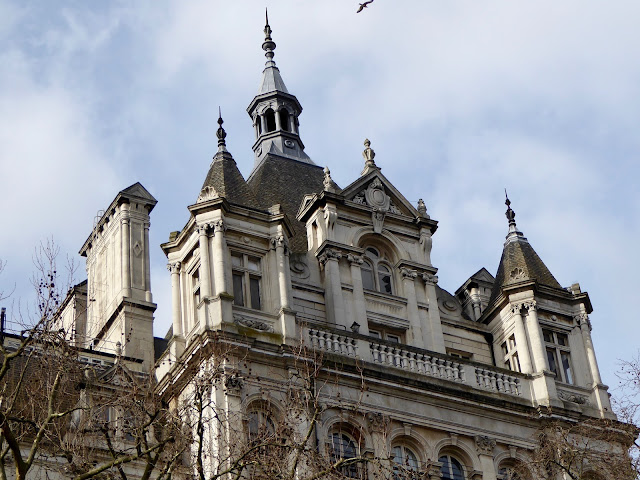 The beautiful buildings of Whitehall Place 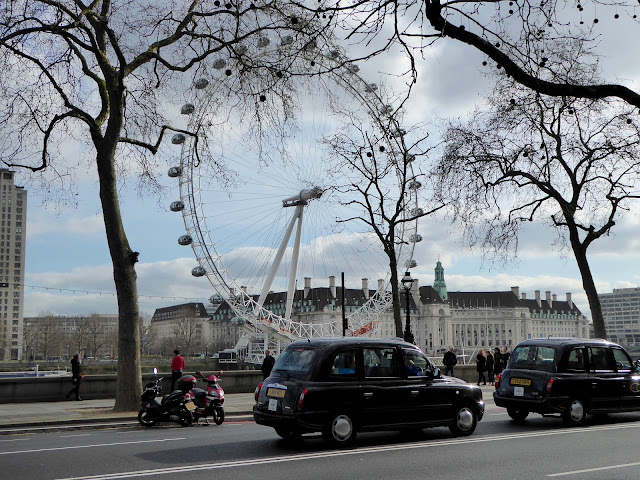 London Eye across the river from 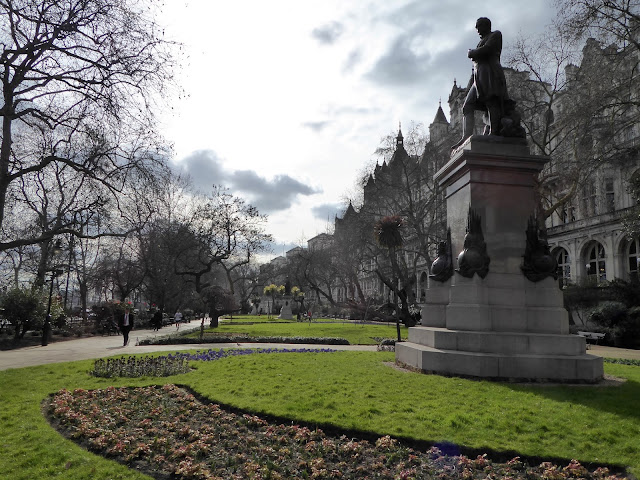 Whitehall Gardens
… and seen on the walk back to catch the bus home ... 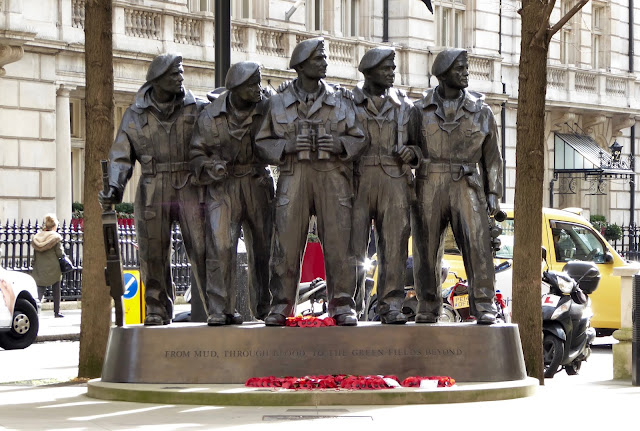 Through mud, through blood, to the green fields beyond. 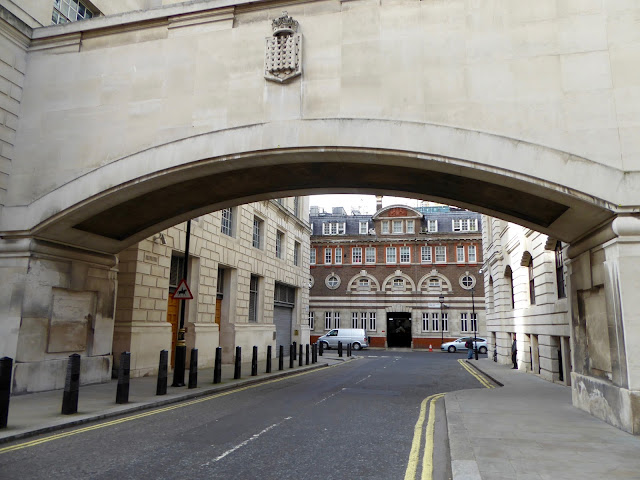 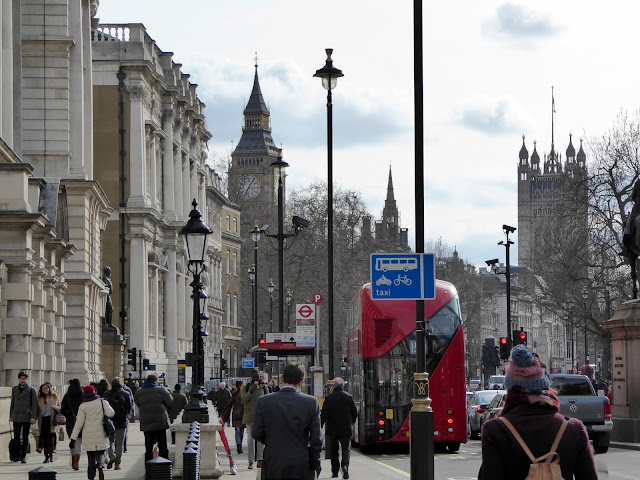 Big Ben, Westminster and St Sepulchre-without-Newgate on the right.

Hi Carol
Thanks for the invite. We're hoping to drop in sometime, providing we don't get kicked off our mooring because of the building work. Kath is out chasing her ancestors this morning at the London Metropolitan Archives, and I have a CRT meeting at LV in the middle of the day, so don't wait in. We'll see if you are there later. It's only a short walk from here. Or should you be passing Herbie knock and see if we are in.

Probably see you later then, looking forward to that.