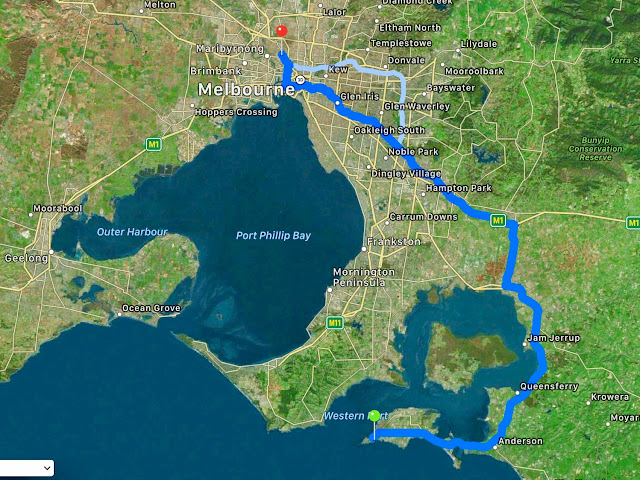 It's a 2 hour drive from Moonee Ponds to Phillip Island off the south coast of Melbourne and we're sooo excited! 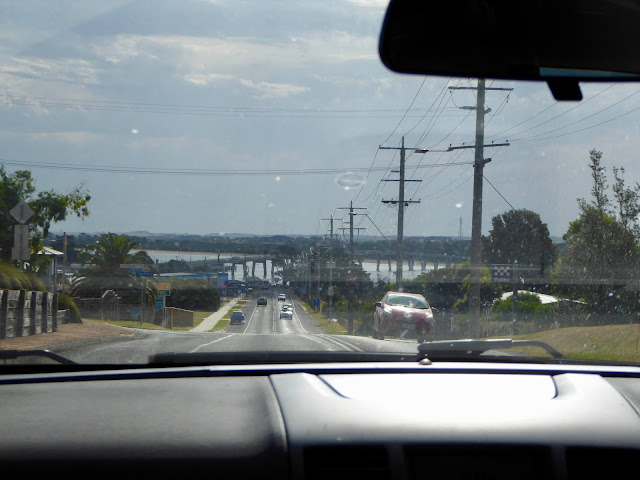 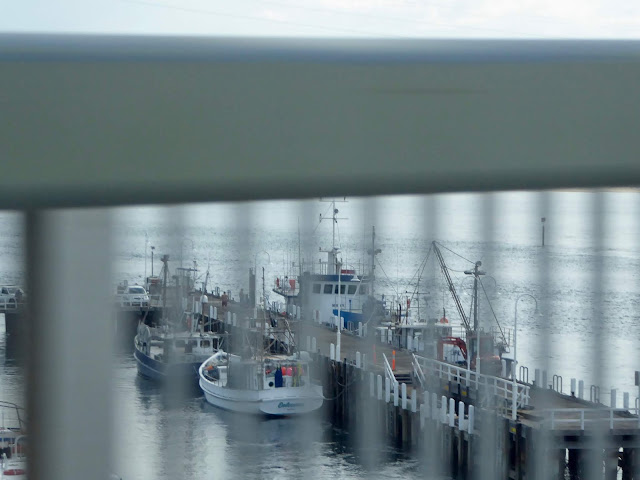 The wharf through the bridge railings as we start the crossing 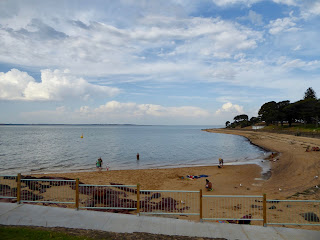 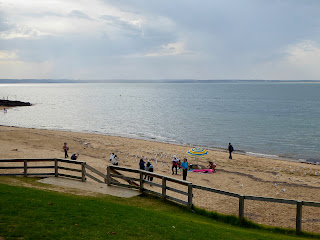 Ray drove us about 20 minutes north to Cowes, the main town of Phillip Island ... 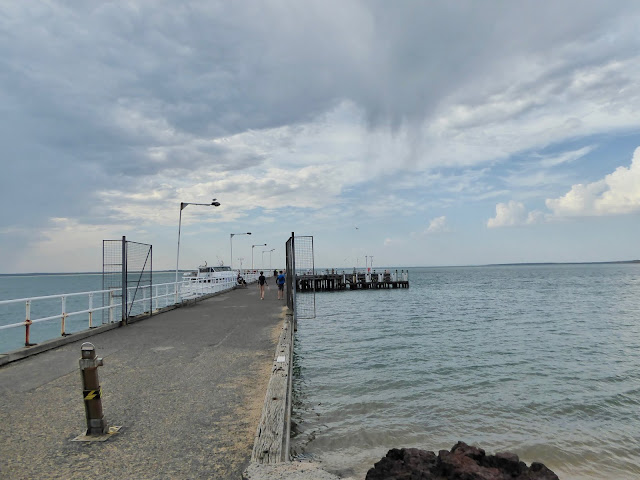 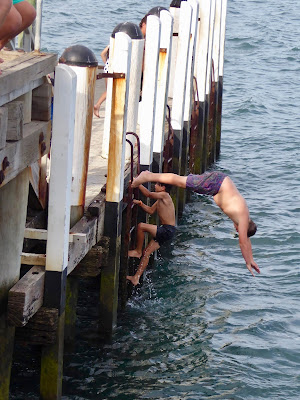 where we walked along the beach and pier ... 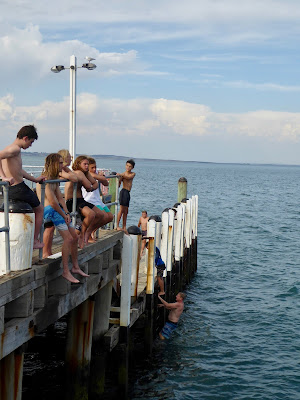 and watched these youngster daring each other to dive in 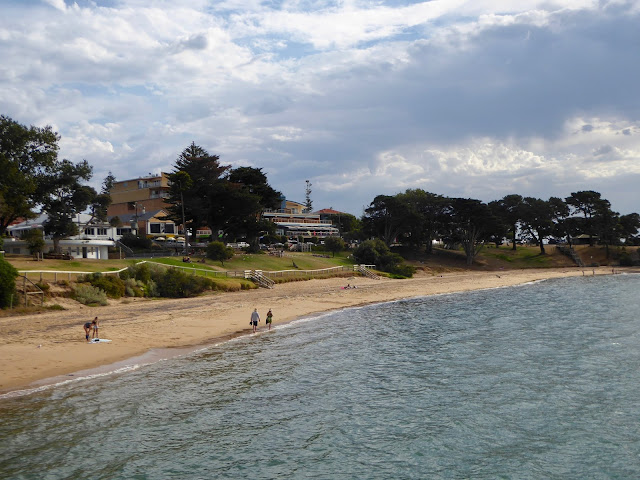 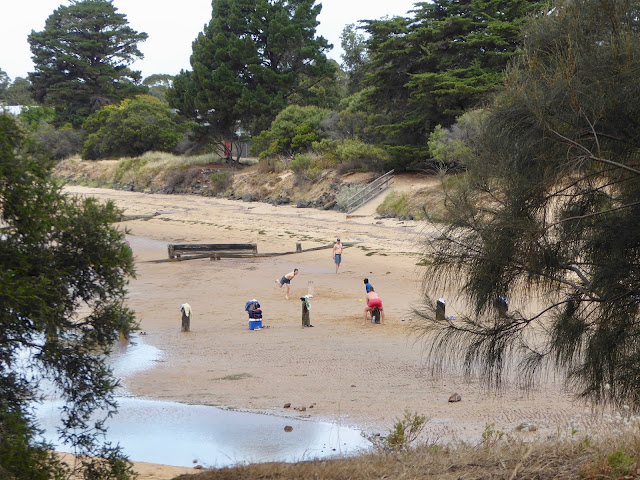 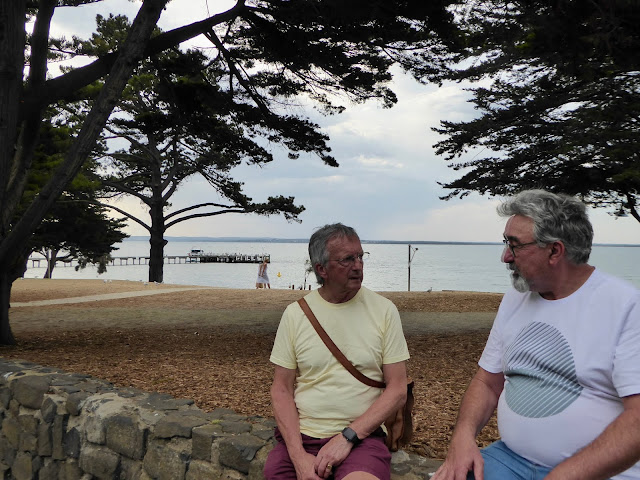 Ray and George having a natter 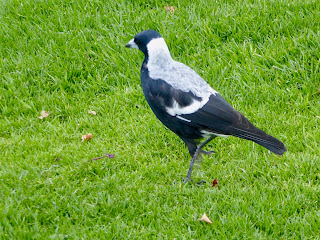 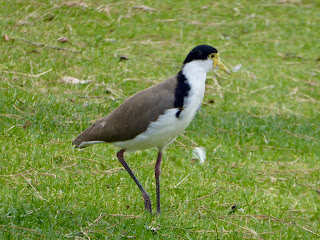 We return to Ray's car and he takes us to south western corner of the island where we've got tickets to watch Phillip Island's Penguin Parade.

The parade takes place an hour or so after sunset ... the penguins are out at sea eating and don't come ashore until it's nearly dark ... 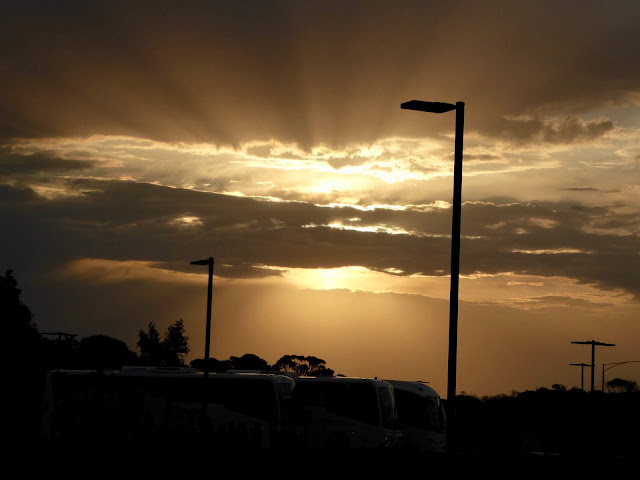 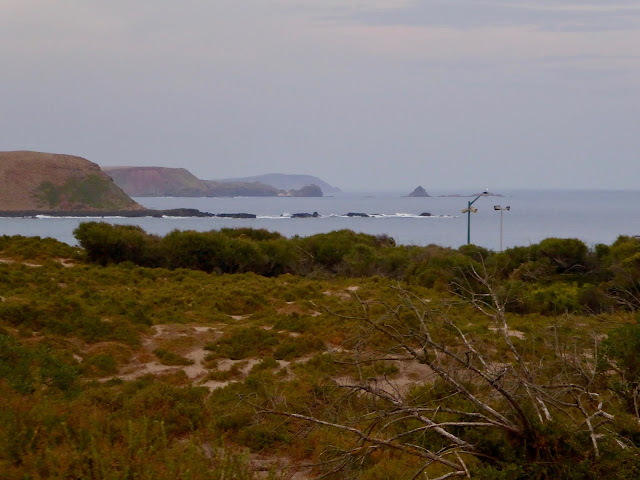 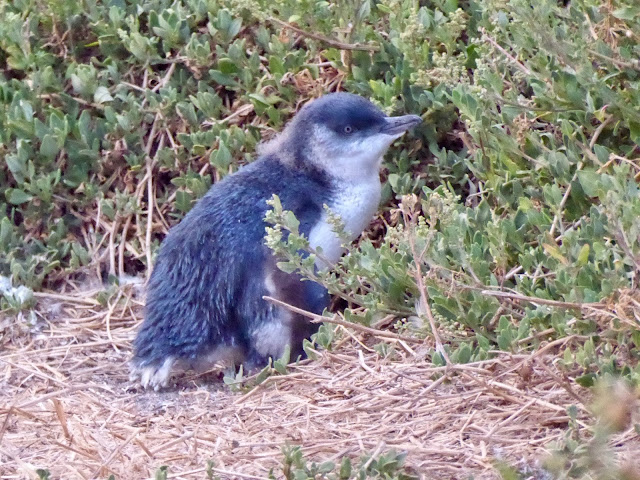 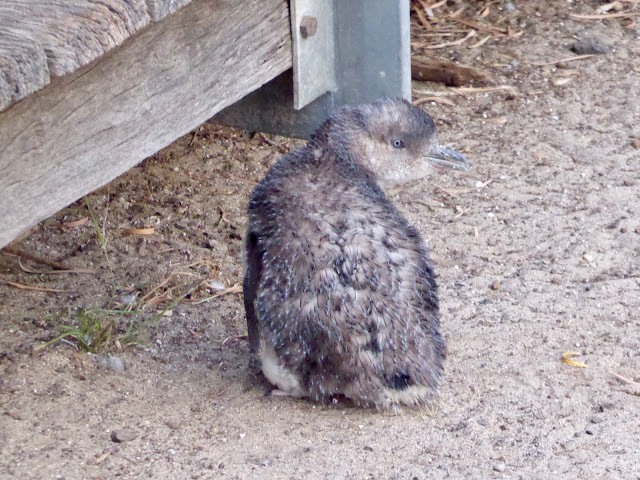 During February the penguins moult and are unable to swim so rely on their partners, etc to bring back food for them. 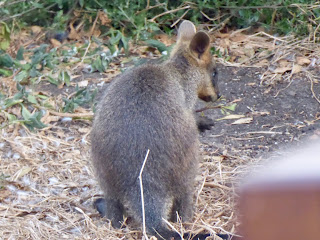 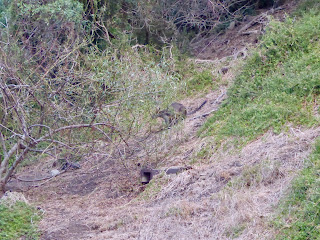 A stray Wallaby amongst the penguin pens 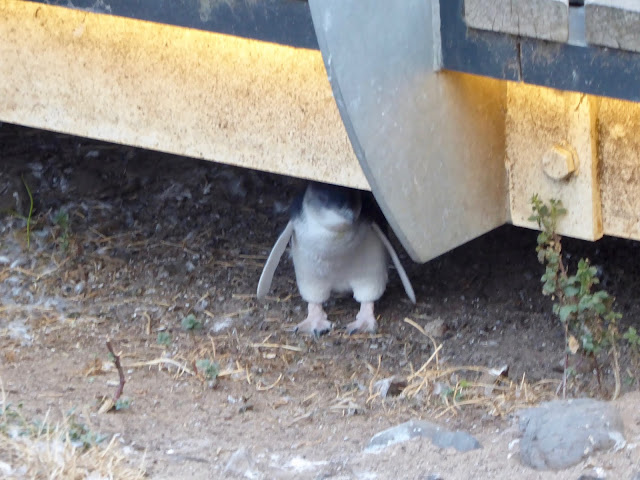 We were told that due to global warming the penguins were having to swim out much further to find food and are sometimes out at sea for more than a few days and some don't manage to return at all. 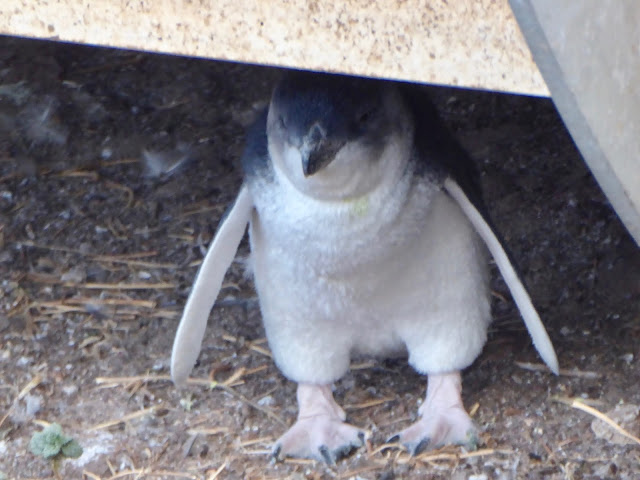 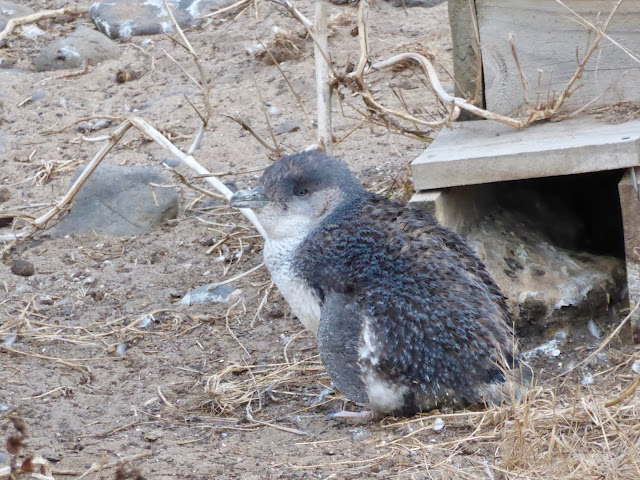 All these pictures were taken as we walked to the viewing platform. 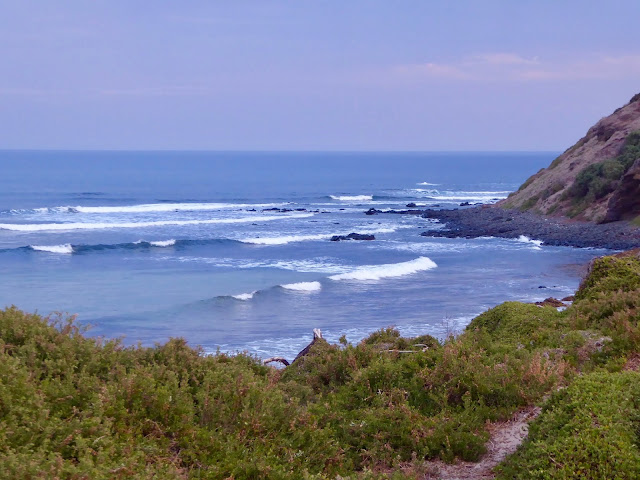 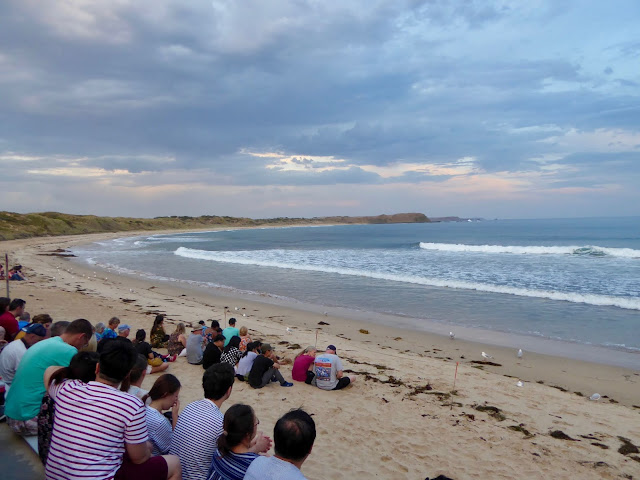 Photos are not allowed during the parade as the flashes will deter the penguins from coming up the beach to their pens. 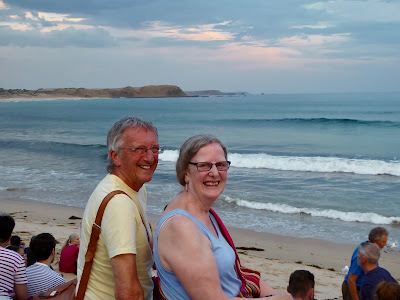 Waiting for the penguins to come ashore, it needs to be a bit darker yet ... 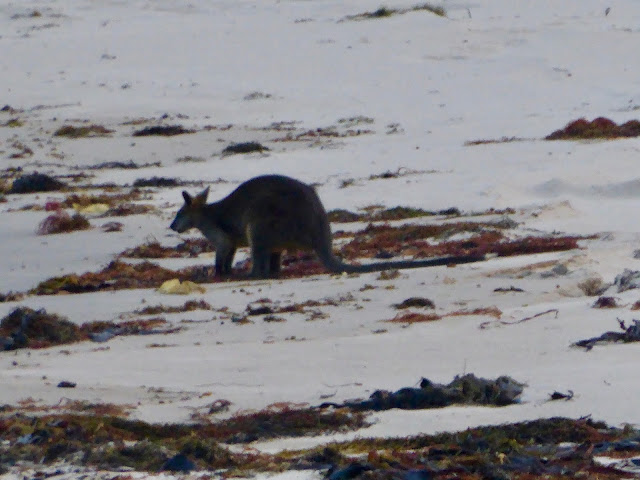 and a wallaby on the beach! 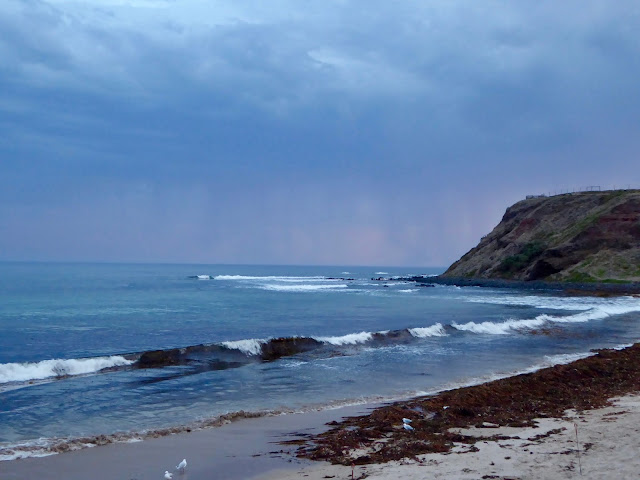 Spectators are also asked to be very quiet and there were guides who would chastise anyone not obeying the rules.

Some days hundreds and even thousands of penguins come ashore here but unfortunately the day we went we only saw about twelve (obviously no photos of them!).

It was quite funny to watch them swim onto the sand and stand up to waddle up the beach and a few of them took a few steps, had a look around and then turned and headed back into the water!

After about an hour the flood lights went on and everyone was asked to make their way out to ensure that any penguins still out at sea can come home without hinderance.

As we were leaving I asked one of the guides why were the penguins by the pens making so much noise and was told that the penguins have a language and that they were calling to their mates, hopefully coming ashore with food for them, to let them know where they were waiting.  The sounds were amazing, like nothing we'd heard before.

Well, what an amazing day we had, a bit disappointed that we didn't see more penguins coming up the beach but all in all ... thoroughly enjoyable.  Thank you Ray.