6 am on Thursday 3rd May 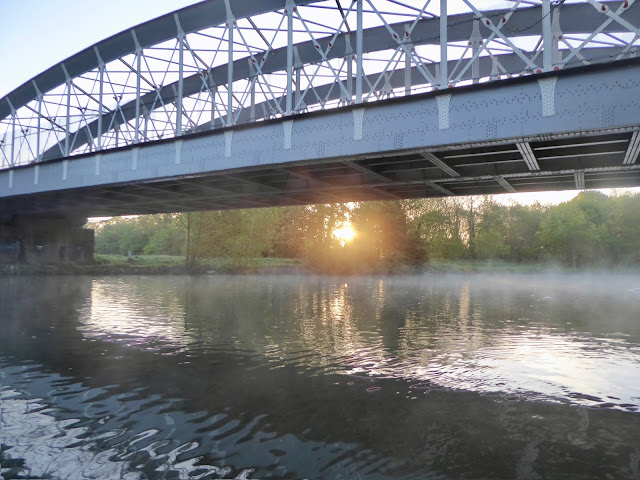 as the sun rises and creates a mist on the water 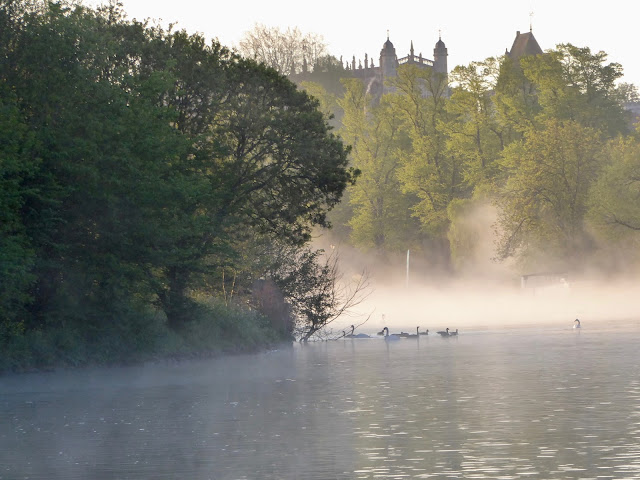 but it promises a good day. 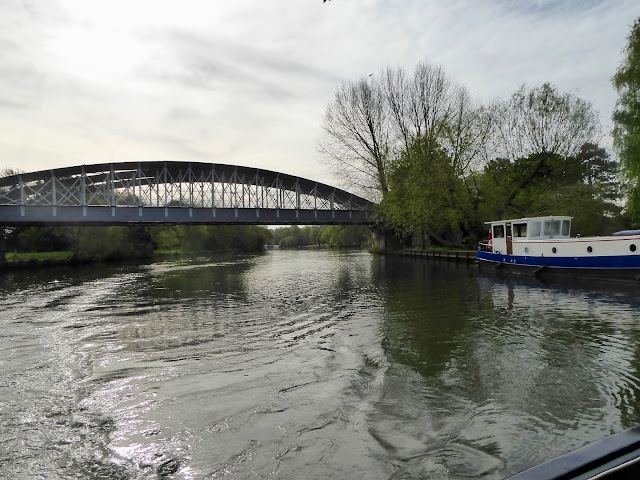 It's nearly 9 when we untie and pull away from our Baths Island mooring in Windsor and turn upstream once more. 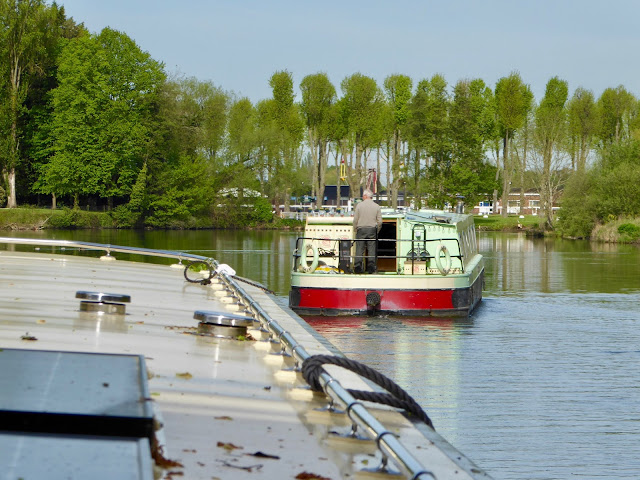 Just as we were about to pull away from the water point 20 minutes later we noticed wb Art Deco coming past us so rather than rush out in front, we waited until he passed us 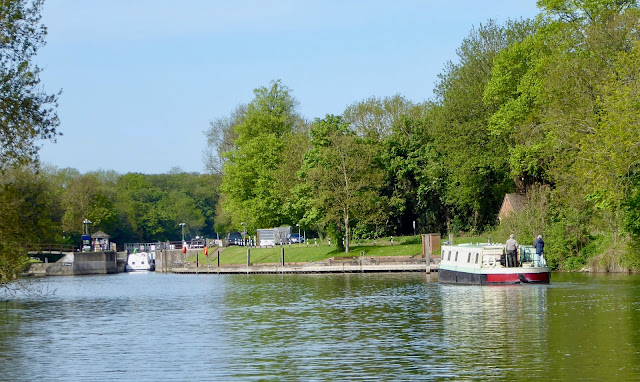 ... he was certainly in no rush and the half mile journey took over half an hour to reach the services below Boveney Lock. 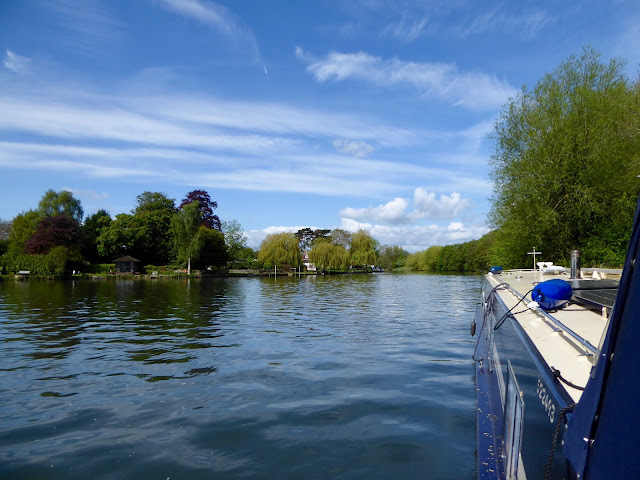 We were so pleased to see that the space we were looking for near Dorney Lake was still empty but it was after 11before we were securely moored.
George had put the bow in first so that I could get off with the rope whilst he was putting the stern of Still Rockin' in front of the cruiser, but the current was pushing us back towards it, and I was finding it was difficult to hold the boat back, (SR weighs approx 34 tonnes), so whilst I held the rope, loosely this time, be took the stern back out, moved forwards and put the back in once more a bit further upstream.  This time it worked ok and we were able to put in the mooring pins and tie up.  Our only disappointment was that there appeared to be a boulder or something in the water that stopped the stern from coming close to the edge so there was a bit of a gap to stride getting on and off but we could cope with that for this very pleasant mooring.
You may remember from my last posting I mentioned that there were no stream warnings below Boveney Lock; above there the river conditions had been 'Stream Decreasing'.  When I looked later at the EA's website this is what I saw ... 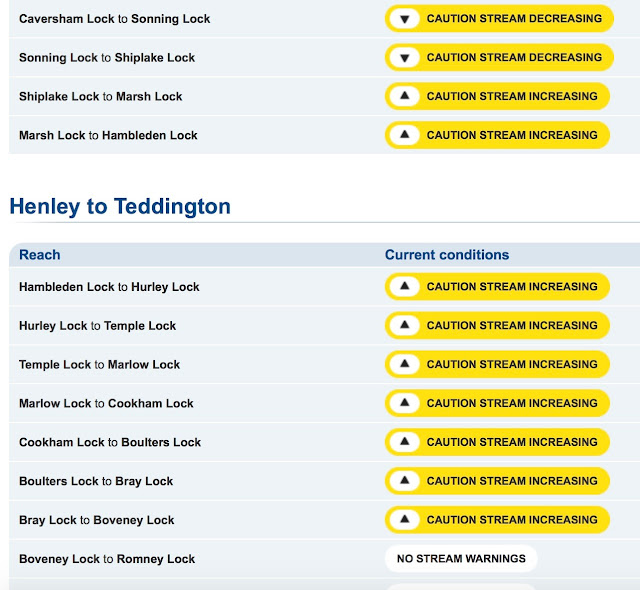 The water in the 10 reaches above Boveney Lock were all Stream Increasing due to the rain during last weekend.  It was no wonder I couldn't hold the boat against the increasing current! 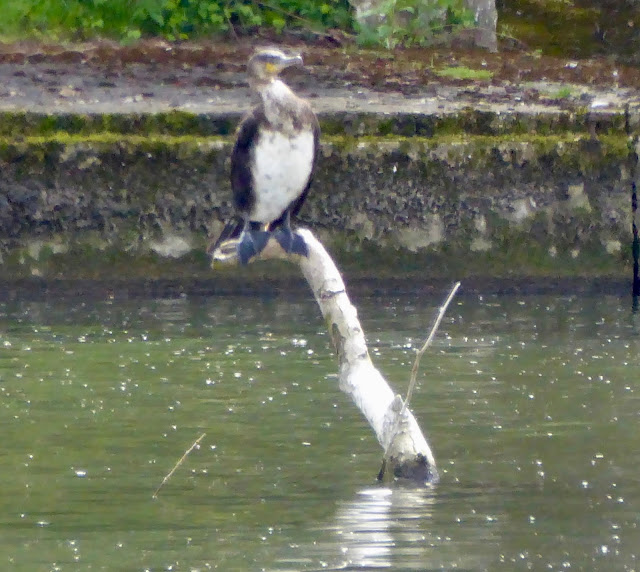 We've not seen a cormorant with a white front before and on looking for information on the internet found that it's probably a young bird in it's first year of adult plumage.

It was a very warm day and we spent the afternoon on the back deck, me in the shade and George in the sunshine and late in the afternoon went for a towpath walk ... 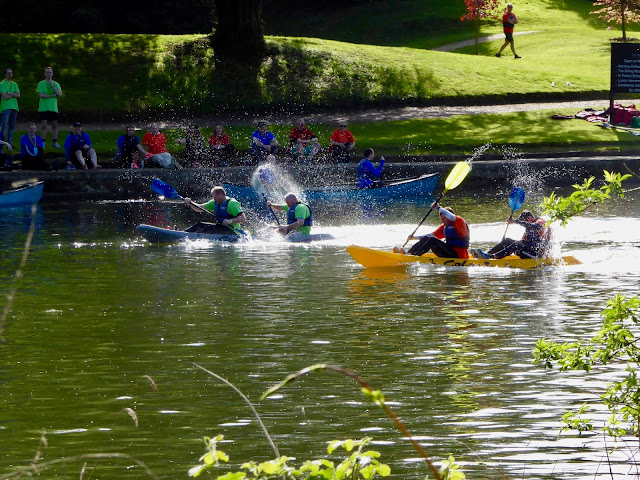 We could hear lots of shouting in the distance 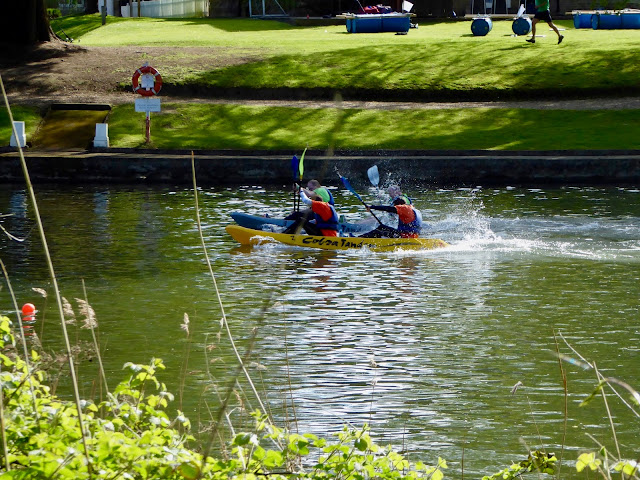 as we approached Oakley Court 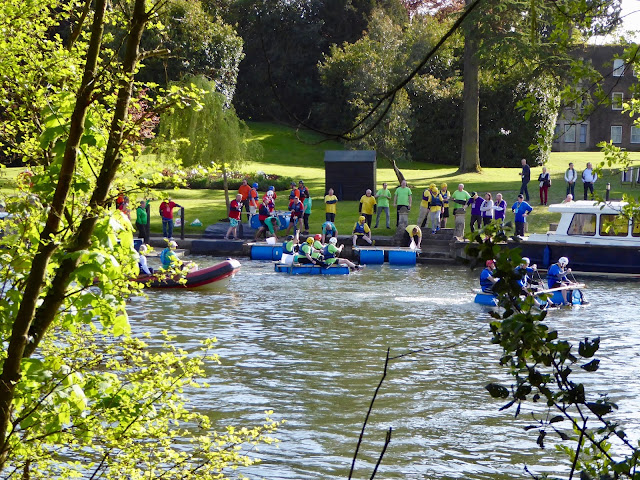 where lots of fun was being had. 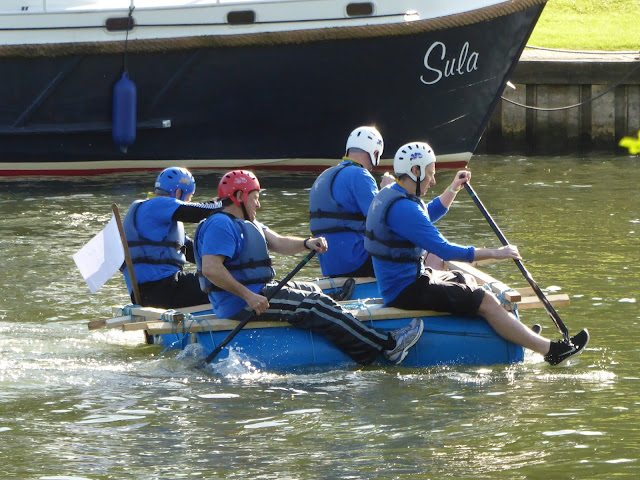 We watched as the oarsmen on this raft paddled very hard against the strong current to get to the start point for the race; they did eventually get there and hung onto a rope to keep them there 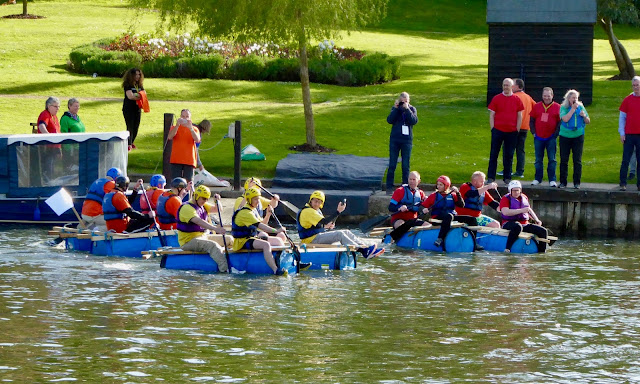 ... whilst the other rafts were put into the water and tried to do the same 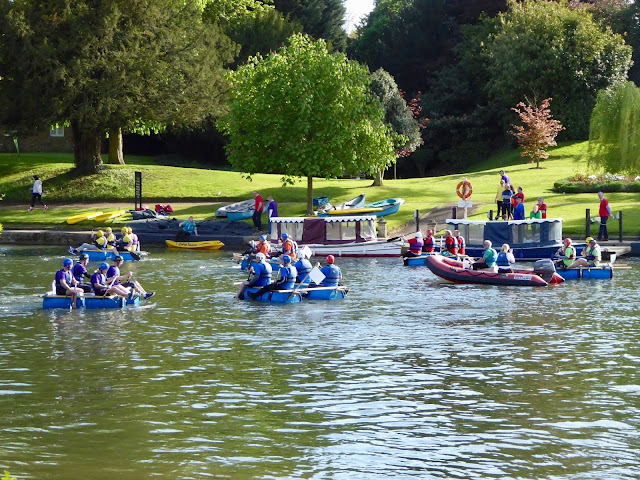 ... unsuccessfully!
They paddled hard and only went backwards with the current.  It appeared that the organisers decided that as the contestants couldn't get to the starting point they'd start the race right there and then midway down the course.  Then it was all STOP! 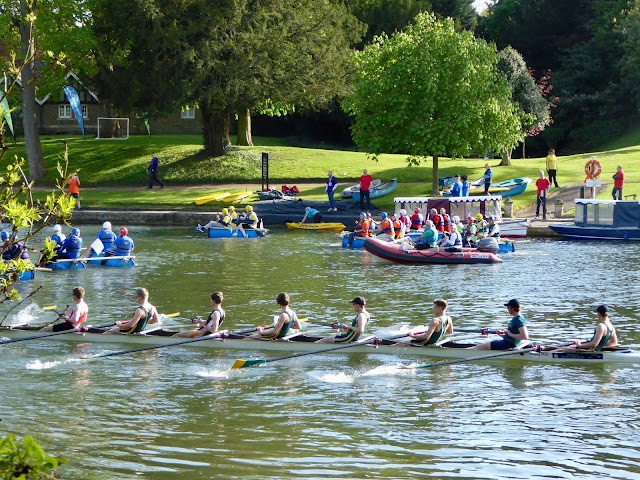 ... when the experts rowed blithely past with no effort at all - talk about showing how it should be done! 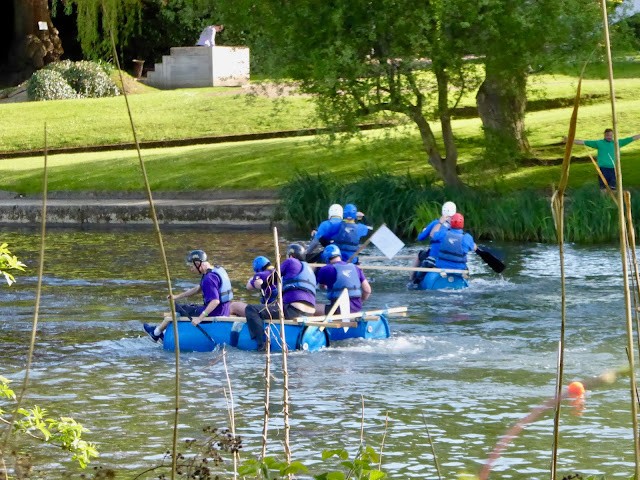 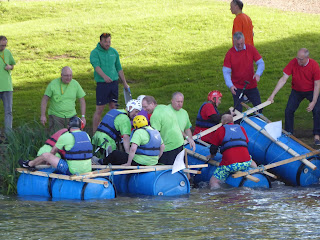 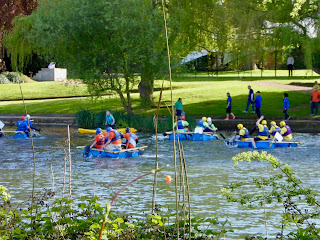 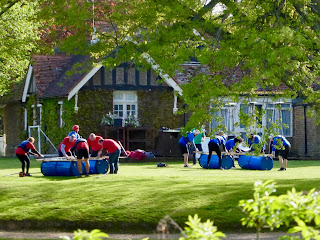 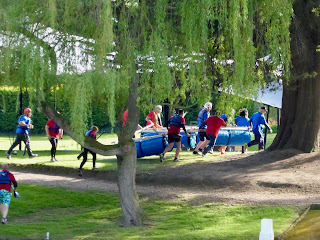 and carry them to a specific place.  We left them to it but as we walked we could still hear over their tannoy system the organiser shouting more instructions at them before the 'race' was over ... 'all four paddles must be placed in a straight line at the side of your rafts' etc.,
The hotel is also a conference centre and what we could see we thought was probably a 'team building' exercise 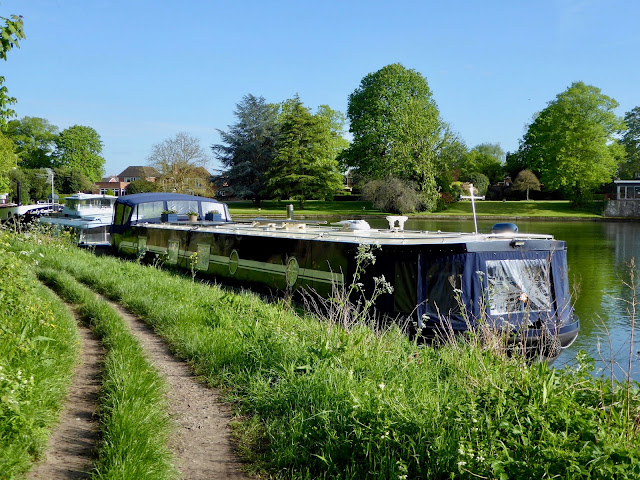 That certainly looks a lovely spot, Carol! What fun to watch those paddlers! It looks as if you are having gorgeous weather too... isn't it wonderful? By the way, I've put a small video on my blog of the dry dock being flooded ready for us to go back in the water. I thought you might like to see it :)