I needed to buy something nice for dinner to feed the delivery man who will arrive early evening today so we took a walk to Tesco along the Great Western Road.  The first stretch of the lovely art deco buildings I covered in my blog of 15th November 2014 but this time we walked further on.  The Tesco store is located at Gillette Corner where ... 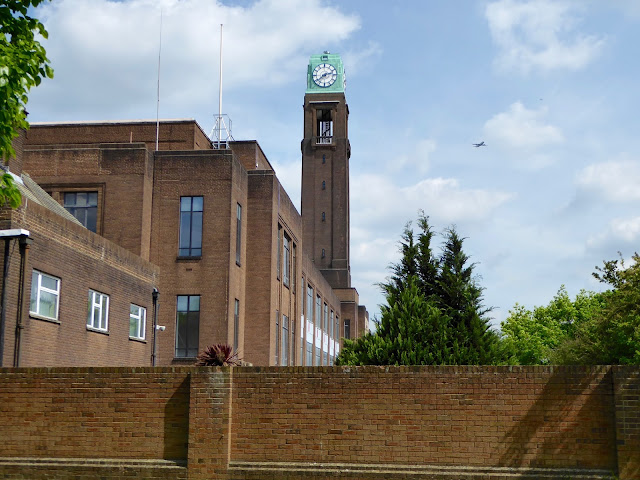 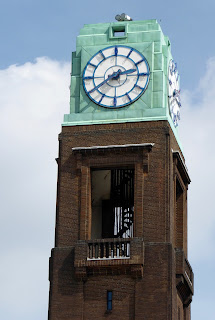 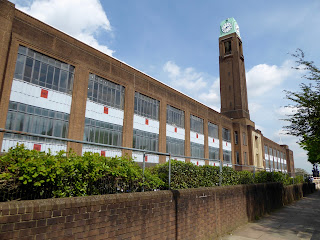 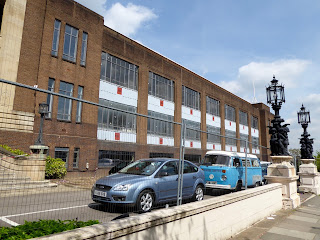 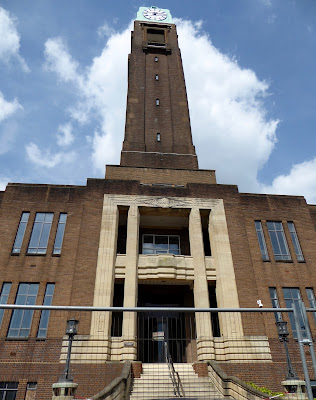 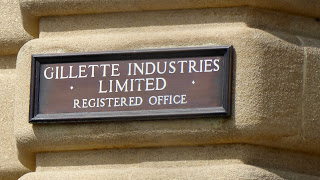 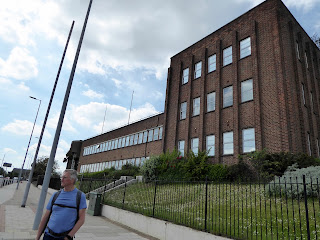 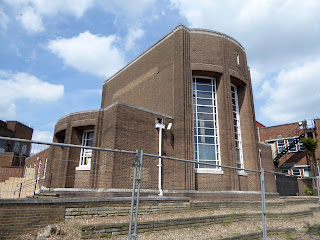 From what I can gather from the internet Gillette put the building up for sale in 2003/4 and eventually moved their operation to Poland in 2006, since then the premises have been vacant although the building was in 2005 bought by theBonnington Group who own and manage hotels, restaurants and real-estate and appear to be based in the Gillette building.

In 2006 Bonningtons made an application to Hounslow Council to develop/ convert/extend the site to include a 500 room hotel/bar/restaraunt, cafe, gym with car park etc. This process was still ongoing in 2008.

Forward to 2013 when Get West London reported that the site had been sold for £23.1m to a company of the same name as the original (Gillette Corner Holdings, but no connection the razor company) for again, redevelopment to a hotel etc., now with existing planning permission but work never began.  There is a comment on the Brentford History site that the newly created company (Gillette Corner Holdings) was dissolved very soon afterwards.

The whole of the premises are now bordered by high fencing and it was full of parked vehicles when we passed by and I couldn’t find any information regarding its current status. 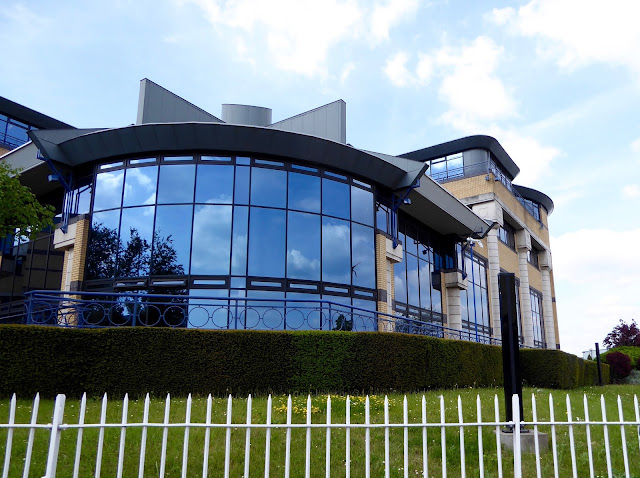 The art deco buildings contrast greatly with the modern glass ones, this one contains SKY’s head office and broadcasting facilities. 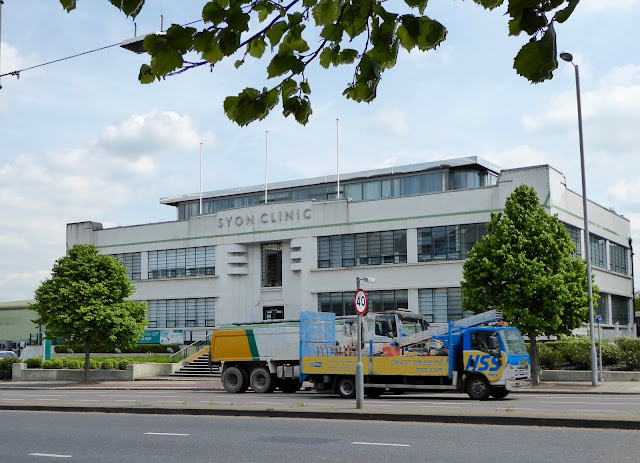 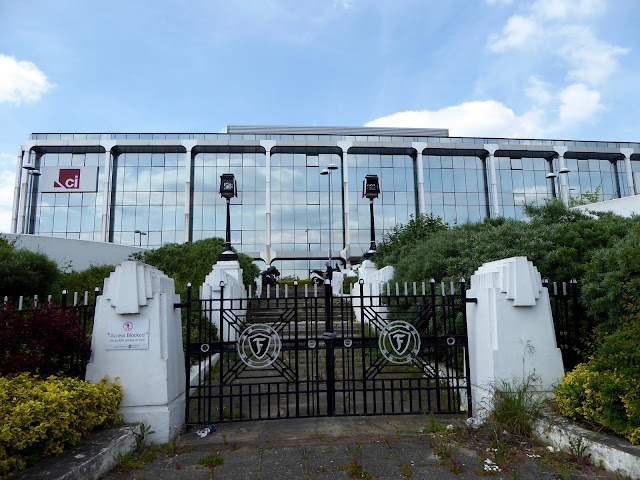 The piers, gates, railings and lanterns are the only parts left of the American company Firestone's first overseas factory built in 1928. These piers appear all along this side of the Golden Mile of Great Western Road and are also Grade II listed.  The building's design was based on that of an Egyptian Temple. 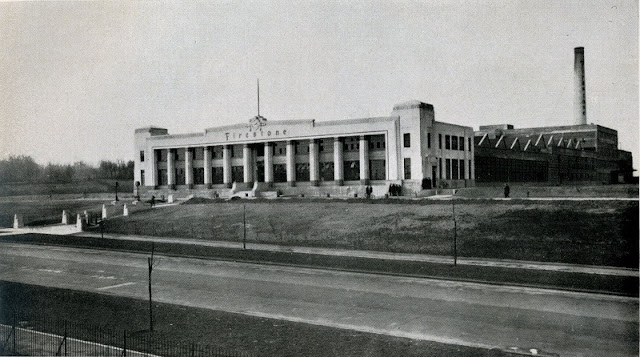 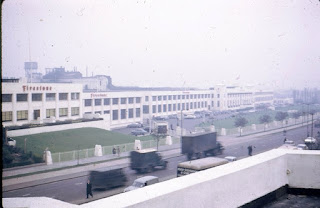 The Firestone Tyre factory operated here until November 1979 when it ceased production and sold the land for development.

There was great controversy when the building was demolished over a bank holiday weekend in 1980 on the eve that a Building Preservation Order (listed) was to be acted on (more info here)  Within a year the Historic Buildings Committee of the DoE had listed a further 150 buildings of this era including Battersea Power Station.

When they decided to cease production in Brentford, they sold the land for development. A call from the Department of the Environment to the developers (but not to us) alerted them that the minister, Michael Heseltine, was going to list the building on Tuesday; on Sunday bulldozers were sent in to demolish the façade. It was a calculated act of philistinism. Simon Jenkins wrote in the first Thirties Society Journal: ‘I can recall few buildings of the last decade whose destruction has produced more spontaneous outrage from laymen.

Did you know that Jazz Age or Jazz Modern/Moderne were what the architects originally called what we know now as Art Deco?

I’ve thoroughly enjoyed researching and writing this post!
Posted by Carol at 13:55

Thanks Caroline. Hope the build is progressing as you expect, do you have a launch date yet?

Back in the day Firestones used to put on a great Christmas tree display. Back in the 60's our dad would take us for a drive along the Great West Road especially to see them.
I was a young telephone engineer in that area at the time when Firestones got demolished. I'm glad that Gilletes is listed.
Mick

I thoroughly enjoyed reading your post. I lived in Hounslow for a while and always admired the lovely buildings along there. As so often happens when you live on the doorstep you never take time to find the history. Thank you so much!

The Christmas display must have fantastic Mick. I love art deco especially the buildings here on the Great Western Road where there are so many together. Thanks for your comments.

Glad you enjoyed it!

Brilliant post Carol. We really enjoyed the history of the buildings there. It is fascinating what is in front of our eyes and we don't really look into it to see what else is behind the modern facades. When you get to Kingston on Thames be sure to have a wander into the town by following the narrwo inlet from Charter Quay. It is an old arm that leads to the Hogsmill River and teh Clattern bridge. Nearby are some blue railings around a monument which lists the very first Anglo-SAxon kings of England--those that ruled before William's conquest. xxx

You must be getting a bit impatient by now.